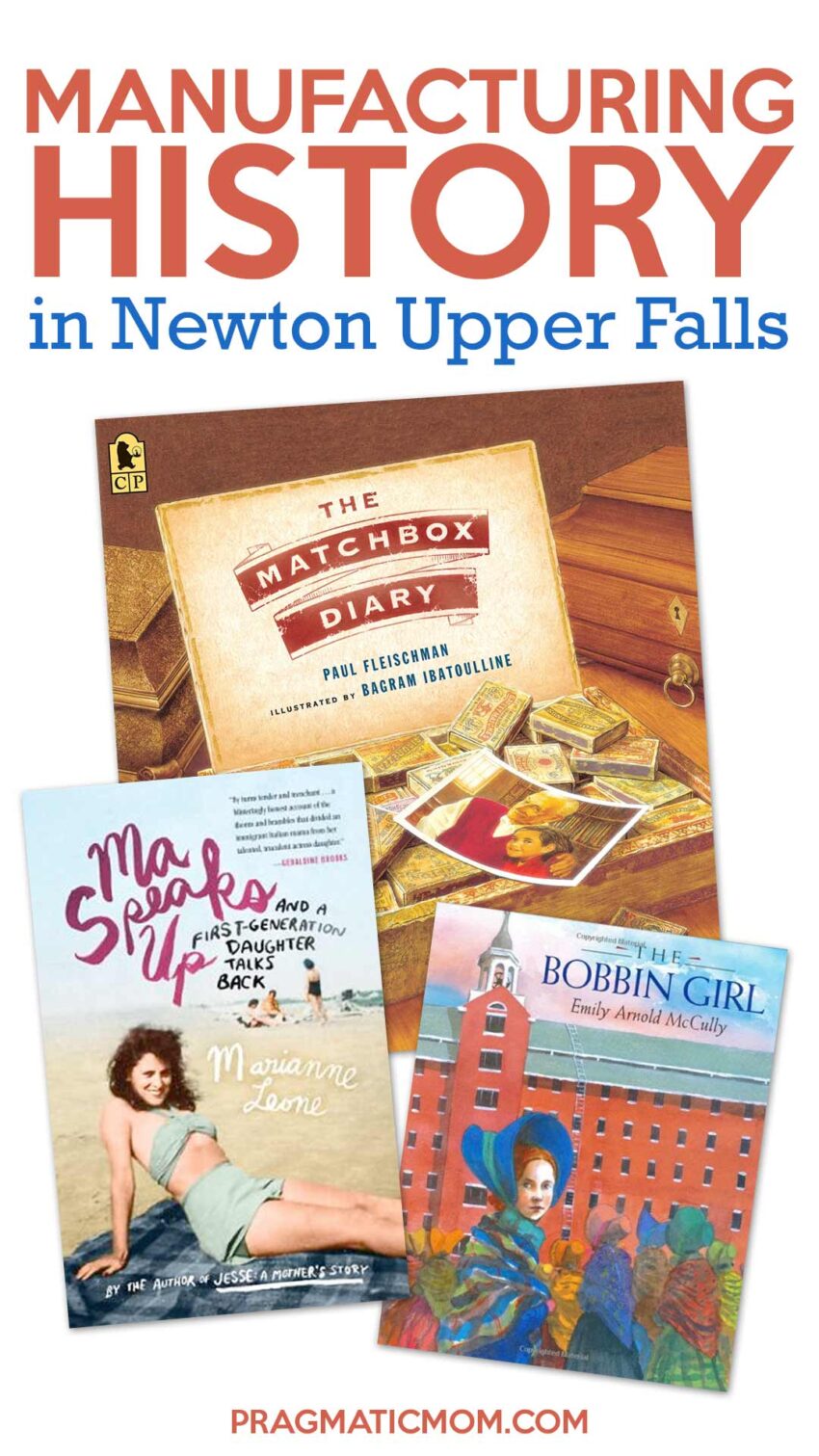 I didn’t realize that Industrial Revolution took place where I live in Newton, Massachusetts. The city of Newton began as an offshoot of the more well-known Cambridge but morphed into its own city. The Charles River winds through Newton and it drops by 25 feet in Newton Upper Falls, creating the perfect conditions for water power to use for manufacturing.

Lumber mills were the first to be set up in Newton Upper Falls which, when the trees were depleted, turned to textiles. The Bobbin Girl is a quintessential story that is still relevant today of the right for workers’ rights. And I would add that Waban, another village in Newton, in the same spirit of The Bobbin Girl, has a Starbucks location that recently unioned!

This fictionalized story about a bobbin girl feels like it is set in Lowell, Massachusetts, but it could also be a story set in Upper Mills, Newton, also in Massachusetts. The scale of manufacturing was much larger in Lowell, but the working conditions for children were similar and hazardous, causing a young girl to wonder if she is brave enough to stand up for workers’ rights. [picture book, ages 6 and up]

Immigrants from Ireland and Italy worked in the factories in Upper Falls, Newton. Factory owners built small, simple houses adjacent to the factories as well as a Catholic Church. The Matchbox Diary could be the story of a Newton immigrant from Italy who came over to work in Newton Upper Falls.

The Matchbox Diary by Paul Fleischman, illustrated by Bagram Ibatouline

Mariane Leone tells an actual story of an Italian worker, her mother, who worked in the Newton factories before getting married. I met Mariane at a literacy event and found out that she grew up in Nonantum, another village of Newton.

The Plant Hunters by Anita Silvey

When the Chinese discovered the secret to creating silk, they held the monopoly on silk production worldwide. The industry was such a boon to Chinese trade that an imperial decree was issued which condemned to death anyone who attempted to sneak silkworms or eggs out of the empire.

The West finally cracked the secret in 552 CE when the Byzantine emperor Justinian sent two Nestorian monks to central Asia. The monks hit the eggs in their hollow bamboo staves. from HistoryAnswers.co

In this excellent and fascinating nonfiction short storybook, Anita Silvey details how silkworm technology was stolen from China. This is an early example of industrial espionage.

Anita Silvey captures the Indiana Jones” of science … the plant hunters. With harrowing clips of the near-death experiences of the likes of Joseph Dalton Hooker, Richard Spruce, George Forest, Charles Darwin, and more, she aptly tells the story of plant hunters including the impact their discoveries made that we benefit from today. [middle grade nonfiction, ages 8 and up] 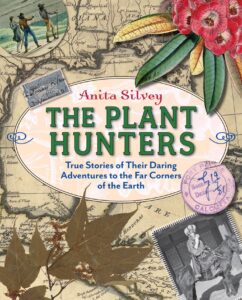 Ma Speaks Up: And a First-Generation Daughter Talks Back by Marianne Leone

“The acclaimed actress and author of Jesse- A Mother’s Story tells the story of her outspoken, frequently outrageous Italian immigrant mother. Marianne Leone’s Ma is in many senses a larger-than-life character, one who might be capable, even from the afterlife, of shattering expectations. Born on a farm in Italy, Linda finds her way to the United States under dark circumstances, having escaped a forced marriage to a much older man, and marries a good Italian boy. She never has full command of English, especially when questioned by authorities, and when she is suddenly widowed with three young children, she has few options. To her daughter’s horror and misery, she becomes the school lunch lady. Ma Speaks Up is a record of growing up on the wrong side of the tracks, with the wrong family, in the wrong religion. Though Marianne’s girlhood is flooded with shame, it’s equally packed with adventure, love, great cooking, and, above all, humor. The extremely premature birth of Marianne’s beloved son, Jesse, bonds mother and daughter in ways she couldn’t have imagined. The stories she tells will speak to anyone who has struggled with outsider status in any form and, of course, to mothers and their blemished, cherished girls.” [adult immigrant biography] 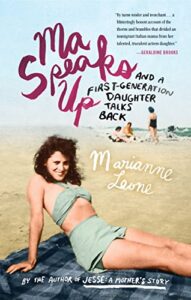 My Newton Upper Falls neighbors conceived this “Walk Through Time” during the Covid lockdown and then hosted this historical tour last month. It’s a fascinating look at the history of Newton:

“Upper Falls is one of the only villages retaining its original name after Newton separated from Cambridge in 1688. The story of Upper Falls is largely the story of the mills. Much of the housing in the village was built in the 1880s to house the workers from the booming bills in Upper Falls.

Upper Falls has a look distinct from the rest of Newton since most of it was built prior to city zoning rules. The village is full of odd-shaped lots, houses hidden behind other houses, and houses in unusual locations within the lot — i.e.e right on the street, or inches away from an adjacent house.

Much of Upper Falls is now a local historic district containing more than 150 structures, many of which look much as they did in the early 19th century.”

Upper Falls: A Walk Through Time

1. The Depot (1855) – where train tracks were extended and later used to fill in Back Bay

4. Mary Immaculate of Lourdes Church (1909) – for the Irish and Italian workers

6A. Echo Bridge (1877) – a stone bridge that is also a National Historic Landmark

8. Sullivan Avenue pothole (10,000) – example of a glacier forming this pothole

This was a two-hour historical tour put on by volunteers residing in historic Newton Upper Falls.

Newton Upper Falls is one of the thirteen villages within the city of Newton in Middlesex County, Massachusetts, United States. Newton’s first mill on the Charles River was built in 1688[2] in Upper Falls. Over the next 150 years, the water power available at Upper Falls led to the village’s steady growth as many more mills were built along that stretch of the river. By 1850 the village had 1300 inhabitants which were 25% of the entire population of Newton.”

Where Am I From? A loaded question?

Visiting the exact location of the Boston Massacre: A Unit on the American Revolution

Boston Marathon View From My House

Lessons From The Boston Freedom Trail

Plimoth Plantation: Learning About the Pilgrims