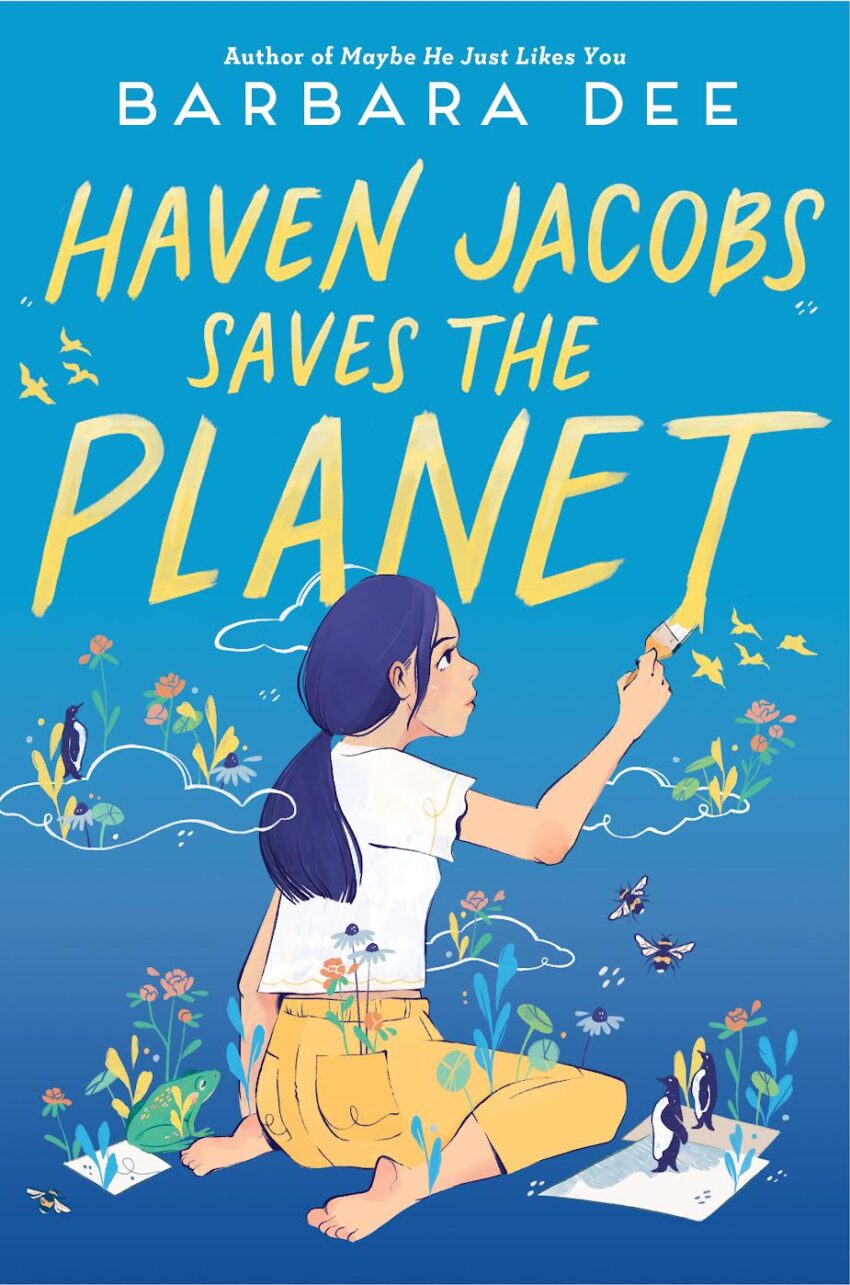 “A powerful depiction of the impact of climate change on a young activist’s mental health.” —Kirkus

My kids are stressed out about the planet. My oldest child is so concerned that, as an Industrial Design major at RISD, she’s minoring in Environmental Studies. I’m worried too. You should see me in the kitchen policing the trash such that the waste goes into the compost bin. I recently got an electric car to reduce my carbon footprint. We don’t have solar panels on our house but we pay extra to buy wind power instead of gas-generated electricity. I fear this is not enough, though.

And I’m not alone. Dee has heard from numerous educators that many of their students are experiencing climate anxiety and that climate change is an important issue in their classrooms. Her latest middle grade book addresses this salient topic of mental health + climate crisis.

Twelve-year-old Haven Jacobs can’t stop thinking about the climate crisis. In fact, her anxiety about the state of the planet is starting to interfere with her schoolwork, her friendships, even her sleep. She can’t stop wondering why grownups aren’t even trying to solve the earth’s problem—and if there’s anything meaningful that she, as a seventh grader, can contribute.

When Haven’s social studies teacher urges her to find a specific, manageable way to make a difference to the planet, Haven focuses on the annual science class project at the local Belmont River, where her class will take samples of the water to analyze. Students have been doing the project for years, and her older brother tells her that his favorite part was studying and catching frogs.

But when Haven and her classmates get to the river, there’s no sign of frogs or other wildlife—but there is ample evidence of pollution. The only thing that’s changed by the river is the opening of Gemba, the new factory where Haven’s dad works. It doesn’t take much investigation before Haven is convinced Gemba is behind the slow pollution of the river.

She’s determined to expose Gemba and force them to clean up their act. But when it becomes clear taking action might put her dad’s job—and some friendships—in jeopardy, Haven must decide how far she’s willing to go. [middle grade, ages 9 and up] 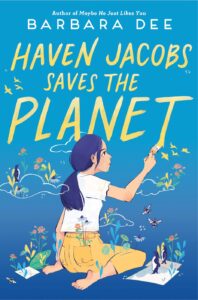 I’m thrilled to have Barbara Dee here today to talk about the story-behind-the story! We are also giving away a copy of Haven Jacobs Saves the Planet. Please fill out the Rafflecopter at the bottom to enter.

When you write upper middle-grade fiction, you can’t avoid writing parents. The challenge is to make them seem like actual parents—loving, but not infinitely patient, supportive, and understanding. In fact, I have to admit that I’ve DNFed a few recent books in which the parents (and grandparents) were nothing but wonderful, no matter the tween kid’s behavior.

In Haven Jacobs Saves the Planet, the main character, Haven, is definitely not the easiest kid to parent. Not only is she highly sensitive and emotional, quick to take offense at her older brother’s teasing—but also, like many middle schoolers, she’s fairly uncommunicative about school and social matters. What Haven does want to talk about—nonstop!–is the climate crisis, especially when her exhausted, stressed-out parents just want some pleasant dinnertime chitchat.

In many ways, Haven’s dad is a lovely father: for example, when Haven is upset about eating a trout they catch on a fishing trip, “without saying anything (he throws) the fish back.” But as Haven and her brother “squabble” at the table, or keep trying to talk about melting permafrost, he loses his temper. Haven’s mom has her limits too. When Haven insists on camping out indefinitely to protest toxic chemicals in the local river, her mom replies, “No way. Absolutely not, Haven!” The resulting argument is one of my favorite scenes in the book, because it sounds realistic to my ears: two under-caffeinated parents who are trying hard to be supportive, but who still draw the line with their twelve-year-old kid.

One reason I like Haven’s parents is that they admit when they mess up. After Haven’s mom once again reminds her not to discuss “upsetting topics” like climate change at the table, Haven interrupts her parents’ conversation about a party invitation, telling them that it’s merely “a little personal issue” that doesn’t matter. When Mom tells Haven that she’s being rude, Haven accuses her of enforcing the “don’t talk about climate change” rule. Then she erupts in a “hurricane of hot, furious tears.”

At first, Haven’s parents are stunned and speechless. Later they come to her room to apologize for not getting her anxiety about the climate crisis. And even though Haven considers that her parents are powerless to protect her “from what was happening in the world. To the world,” she also appreciates that “they were listening, finally. And not telling me to change my personality.”

Haven’s parents support her in other ways as well. Although it does take them a little too long to comprehend the extent of Haven’s eco-anxiety, both parents eventually communicate pride in their daughter’s activism. Dad participates in Haven’s overnight protest, even at the risk of being fired from his job. Mom defends Haven and her friends when another parent questions their right to protest. Of course, Mom does insist that Haven wear a skirt to the Town Board presentation– but after all, she is a mom!

So I have to say that for all their flaws, I think Haven’s parents are pretty terrific. Because not only do they listen and correct course when necessary, they also accept their daughter for who she is—and really, what’s more important to a kid than that?

We are also giving away a copy of Haven Jacobs Saves the Planet. Please fill out the Rafflecopter at the below. We can only mail to U.S., Canada, and A.F.O. addresses. 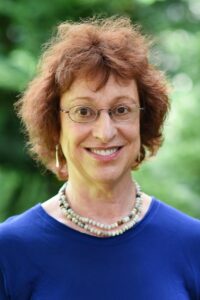 Barbara Dee is the author of twelve middle grade novels including Violets Are Blue, Haven Jacobs Saves the Planet, My Life in the Fish Tank, Maybe He Just Likes You, Everything I Know About You, Halfway Normal, and Star-Crossed. Her books have earned several starred reviews and have been named to many best-of lists, including The Washington Post’s Best Children’s Books, the ALA Notable Children’s Books, the ALA Rise: A Feminist Book Project List, the NCSS-CBC Notable Social Studies Trade Books for Young People, and the ALA Rainbow List Top Ten. Barbara lives with her family, including a naughty cat named Luna and a sweet rescue hound named Ripley, in Westchester County, New York. To learn more, check out her website and follow her on Twitter, Instagram, and Facebook. 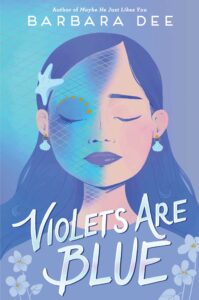 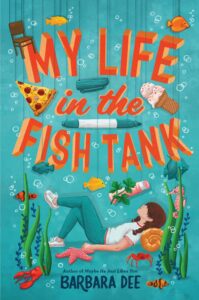 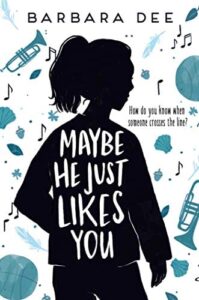 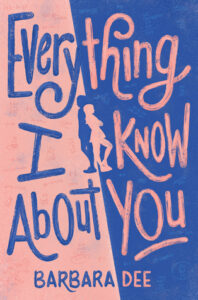 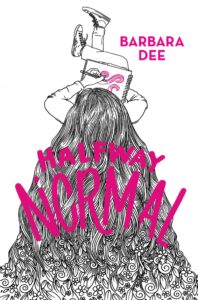 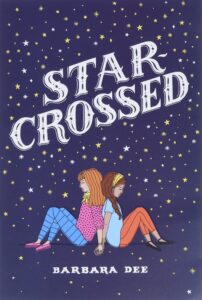 4 thoughts on “Barbara Dee on Parenting in Haven Jacobs Saves the Planet & GIVEAWAY!”