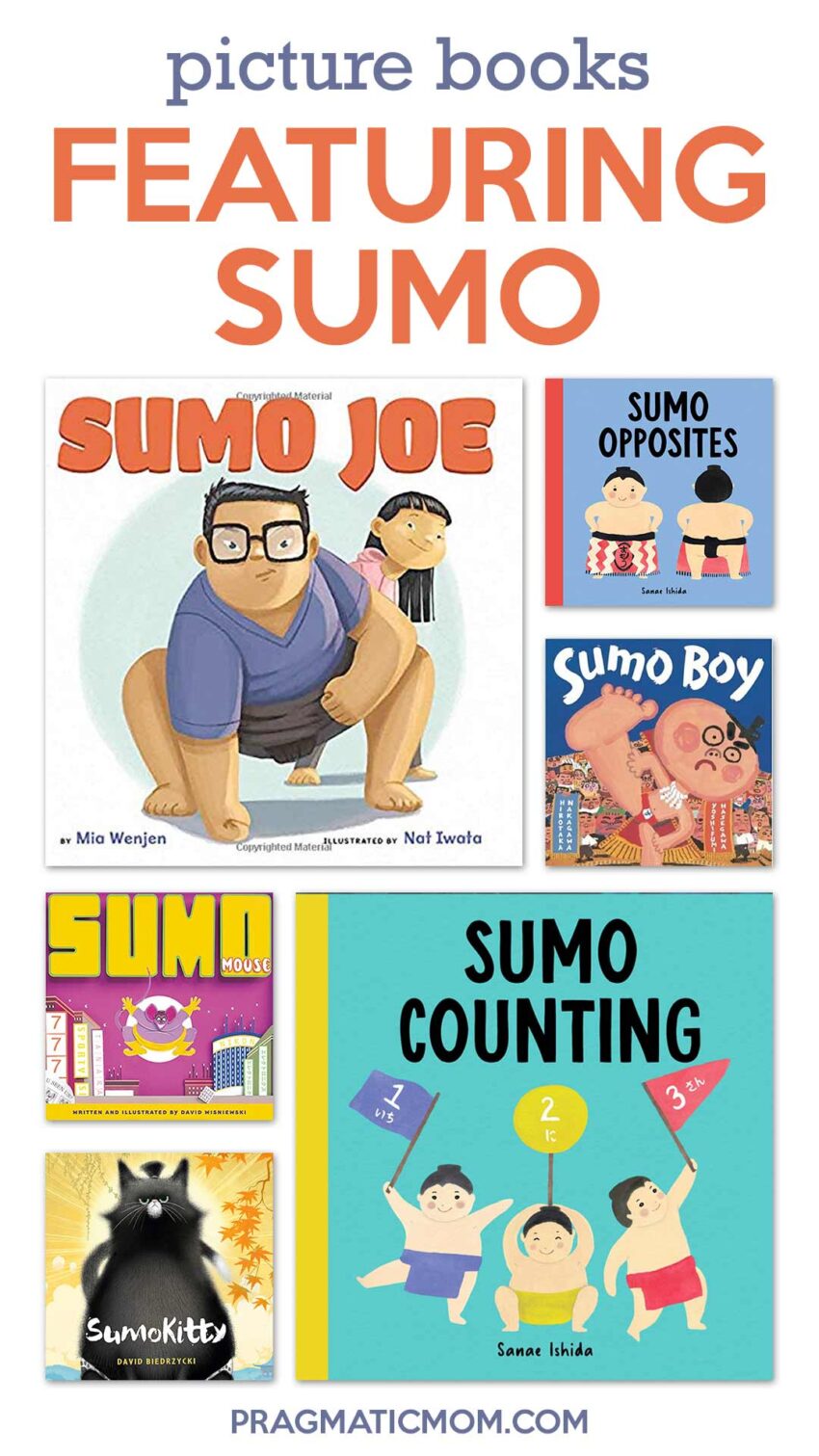 When I submitted my picture book manuscript, Sumo Joe, to Lee and Low’s New Voices competition, I received a response that my picture book had not won, but that I had the opportunity to receive feedback from editors at Lee and Low. My editor, Kandace Costin, found only one sumo picture book at the time when she researched the market. I noticed that a few more children’s books featuring sumo have been published so I thought I would do a round-up so Sumo Joe can have some friends!

In this sweet and funny story, Sumo Joe and his friends enjoy pretending to be sumo wrestlers. But when his little sister wants to join their boy-only game, what should Sumo Joe do?

I wanted to show sumo in its true light, as a sport, deeply rooted in Japanese culture and religion (versus something comedic featuring fat men in diapers). I added martial art, aikido (which, by sheer coincidence, Nat and I both studied briefly) to showcase Japanese hand-to-hand combat, sibling style! It is my hope that our story gets kids excited to learn more about sumo and Japanese culture while being able to relate to pesky little sisters! [picture book, ages 4 and up]

I am giving away a sumo-sized picture book giveaway! To enter, please fill out the Rafflecopter at the bottom.

I love how Japanese words, including sumo terms, are woven into the story of this cute counting board book. Kids can learn to count from 1 to 10 in both English and Japanese! The numbers 50 and 100 are also included. This board book even includes an illustrated glossary in the back! [board book, ages 0 and up]

Baby sumo wrestlers introduce the concept of opposites in this bilingual Japanese board book. I am learning Japanese through Duolingo and I found this very helpful as I don’t know all these words. The Japanese words are in Katakana which is like a Japanese alphabet. Many of these words can also be written Kanji, which is similar to Chinese characters, but that is more advanced! [bilingual Japanese board book, ages 0 and up]

Yoshifumi Hasegawa is a Japanese author, former kindergarten teacher, and musician. His picture book depicts a new superhero, Sumo Boy! Sumo Boy uses his wrestling skills to help a girl being bullied and then completes his good deed by bringing her to a restaurant for a sumo meal of Chanko Nabe, hot pot. [picture book, ages 4 and up][

After his football career fails to take off, Scott gets the opportunity to train as a sumo wrestler in Japan. It’s a tough transition to leave a small town in California and move to a new country. Scott, now renamed Hakugei (his novice sumo name; he may get a new sumo name if he reaches a higher rank of sumo), meets the dojo’s owner’s daughter Asami. Will he be able to succeed at sumo or will he be forced to return home? His next five sumo matches will decide his fate.

Scott’s sumo journey is similar to American sumo champion Chad Rowan (Akebono) which I found fascinating. I personally found the storyline choppy and hard to follow. The pages had three color schemes, orange, blue and green. Orange seems to be the story in the present time. Blue is the story when it is set in the past in California. Green is the recent past set in Japan. It would have helped if Scott/Hakegei looked a little more different from his sumo opponent. The three timelines converge at the end, but I honestly don’t know what happened. Did Scott win a match? I think so…??? It’s a little too much work to figure this out. I do like Pham’s illustrations and spare text. [graphic novel, ages 14 and up]

This is another sumo story about a superhero, Sumo Mouse. When mice go missing, Sumo Mouse is on the scene. An evil cat is kidnapping mice to use as part of a squeaky toy. At a sumo match, champion sumo mouse Gachinko battles an evil robot. Sumo Mouse is there to save Gachinko in this match of wits and skill. Fans of comic books will enjoy this sumo adventure! [picture book, ages 5 and up]

“Fall down seven times; get up eight.”

I love this sumo story of a stray cat who wants to earn a place at the sumo heya (training house). To do this, the sumo cat needs to keep the mice away. The cat needs to train like a sumo wrestler to overcome the mice. This picture book shows sumo wrestlers’ mental attitude as well as Japanese culture. It’s a charming story of perseverance through sumo training. The illustrations are also really beautiful! [picture book, ages 4 and up]

I am giving away a sumo-sized picture book giveaway! To enter, please fill out the Rafflecopter below. I can only mail to U.S. and A.F.O. addresses. 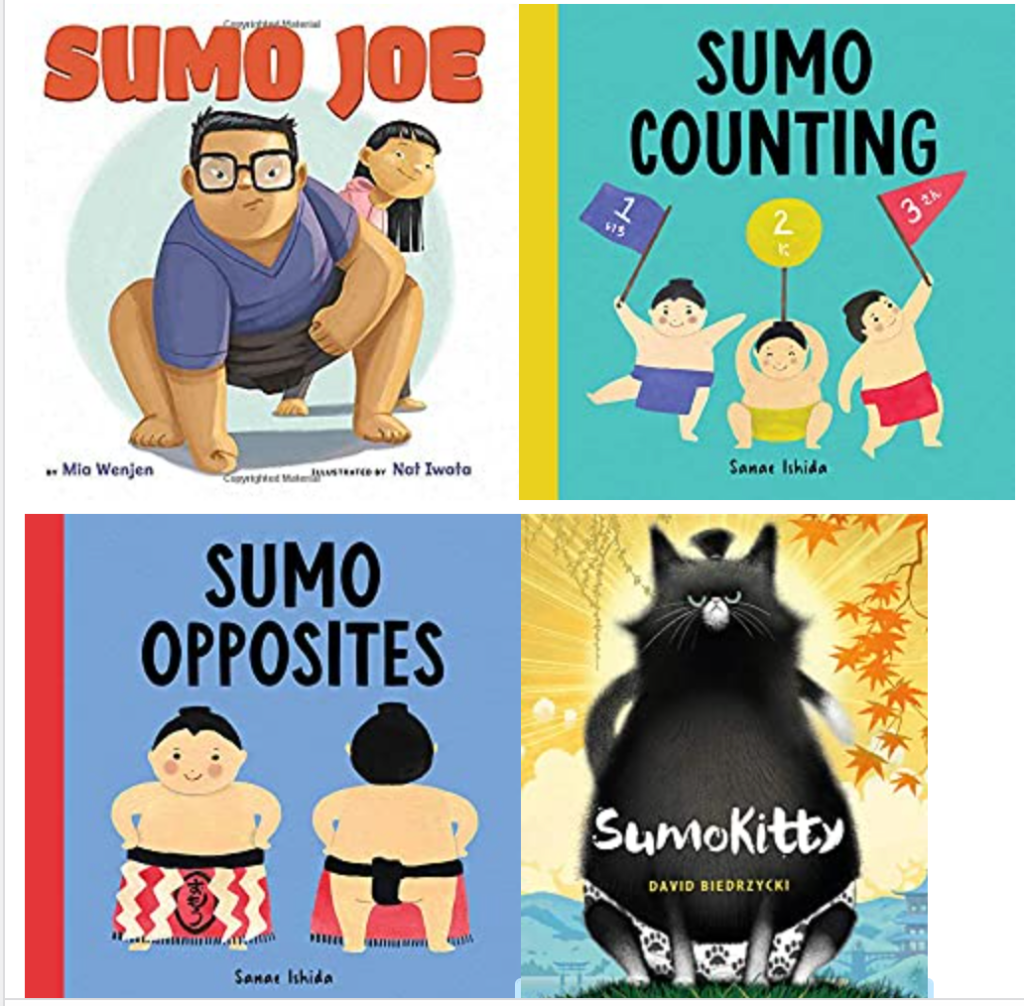 Sumo Joe on The Children’s Book Podcast with Matthew Winner

Thank you everyone! SUMO JOE on 2nd printing!!!