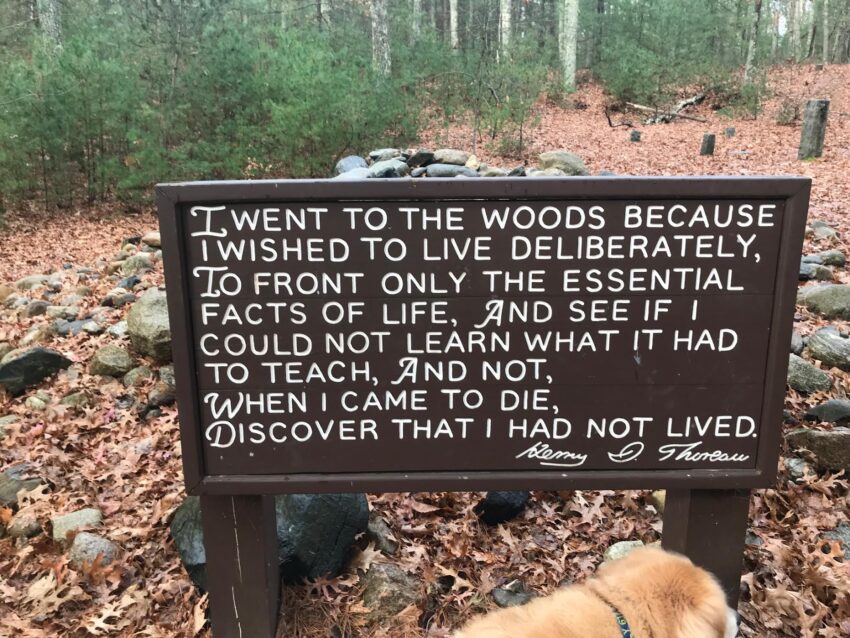 I  finally visited Henry David Thoreau House at Walden Pond in Concord, Massachusetts. It’s about 20 minutes from where I live and I have passed it many, many times, but never stopped to see it.

He was a precursor to the Tiny House movement. His house can be described not just as tiny but also as a hut. It’s just one room with a woodshed directly behind the house.  He also had a beanfield nearby. The land was poor for agriculture and only beans would grow near Walden Pond. 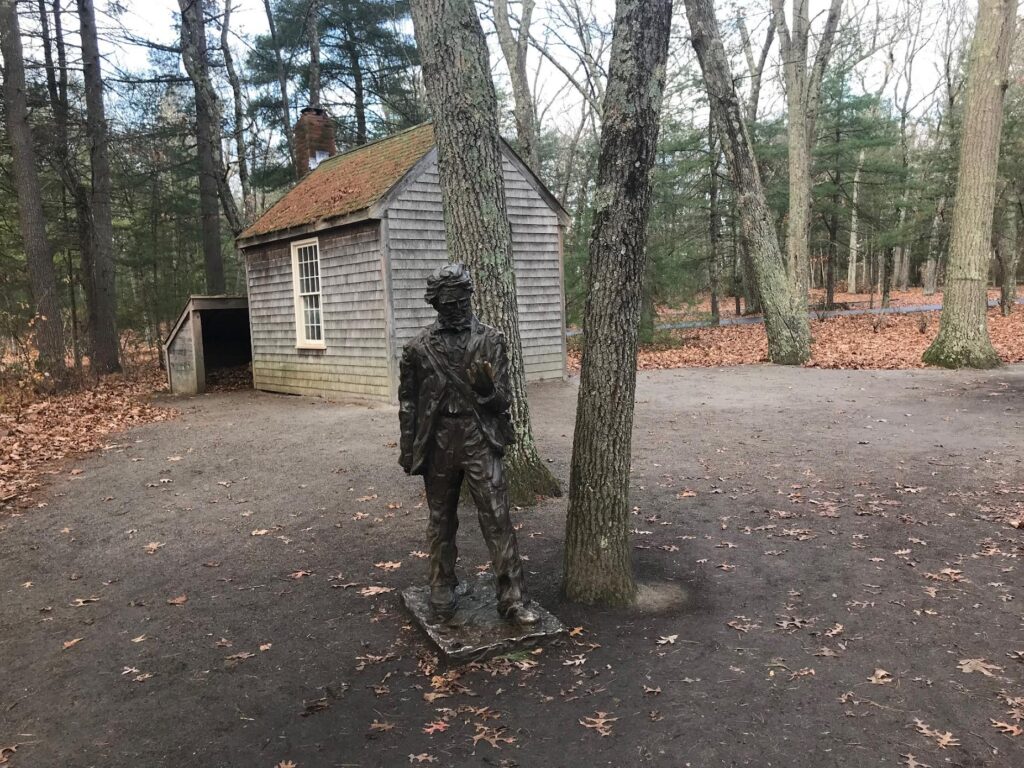 The location of Thoreau’s house is carefully preserved but the actual house is gone. There is a reproduction in the parking lot area complete with furnishings that included a small desk where Thoreau wrote his famous books.

I did not realize that Henry David Thoreau (1817-1862) was born and lived nearly all his life in Concord. But he’s not the first person to live in Walden Woods. Black people — freed slaves — also lived there long before Henry David Thoreau

“Yet, until very recently, there has been little acknowledgment that Walden Woods was first occupied by Black people whose experience of self-sufficiency was harrowingly different from Thoreau’s two-year experiment.

“Walden was a Black space before it was a green space,” said Elise Lemire, a professor of literature at Purchase College, State University of New York, and author of “Black Walden,” which chronicles the lives of the formerly enslaved people of Walden Woods. 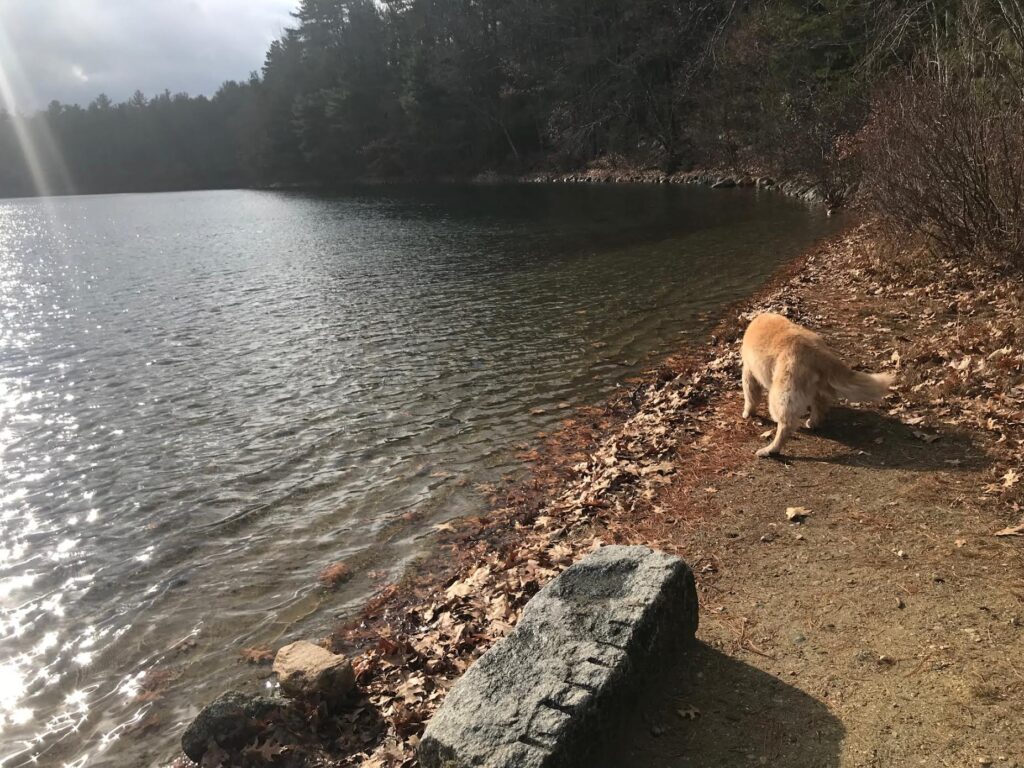 The existence of these earlier residents also runs directly counter to the popular myth of Massachusetts as the cradle of American liberty and home to an abolitionist movement that had been untarnished by slavery, Lemire notes.”

“Then, too, the only land made available to formerly enslaved people in Massachusetts was generally the most inhospitable to farming and as far as possible from White society. In Concord, it consisted of Walden Woods, where survival was unsparingly arduous, and the nearby and somewhat more fertile edge of the Great Field, also known as “Caesar’s Woods” for Caesar Robbins, a Black formerly enslaved Revolutionary War veteran who had made his home there.

Most of the formerly enslaved people who lived in Walden Woods were allowed to squat thereafter they were freed or had wrested their freedom, Lemire said. In Massachusetts, emancipation happened gradually through lawsuits, with freedom finally ordered by the state in 1780.

In all, about 15 Black people moved into Walden Woods, their cabins clustered in a “small village,” as Thoreau would later describe them. Brister Freeman stood out as a Black landowner.

“Down the road, on the right hand, on Brister’s Hill lived Brister Freeman, ‘a handy Negro,’ slave of Squire Cummings once…With him dwelt Fenda, his hospitable wife, who told fortunes, yet pleasantly – large, round, and black, blacker than any of the children of night, such a dusky orb as never rose on Concord before or since,” Thoreau wrote in “Walden.

In 1822, Brister Freeman died in his 70s, two years after his older sister. Barely a decade later, few traces remained in Walden Woods of the siblings or the other formerly enslaved inhabitants. Their community had not lasted into the next generation.

As for Freeman and those who had lived in Walden Woods decades earlier, Thoreau “is waxing poetically about these earlier Black inhabitants without describing their pain,” said Madison, the director of the Institute for Economic and Racial Equity and associate dean of equity, inclusion, and diversity at Brandeis University.” From The Washington Post

All of my book lists are now indexed and cross-referenced: List of Lists: 300+ Book Lists for Kids.

If you read these picture books in order, it gives an overview of the African American experience historically starting from slavery to the present day.

These five books show different perspectives from the story of young Masaii girl who wants to touch the moon to visiting family in Tanzania and The Gambia.