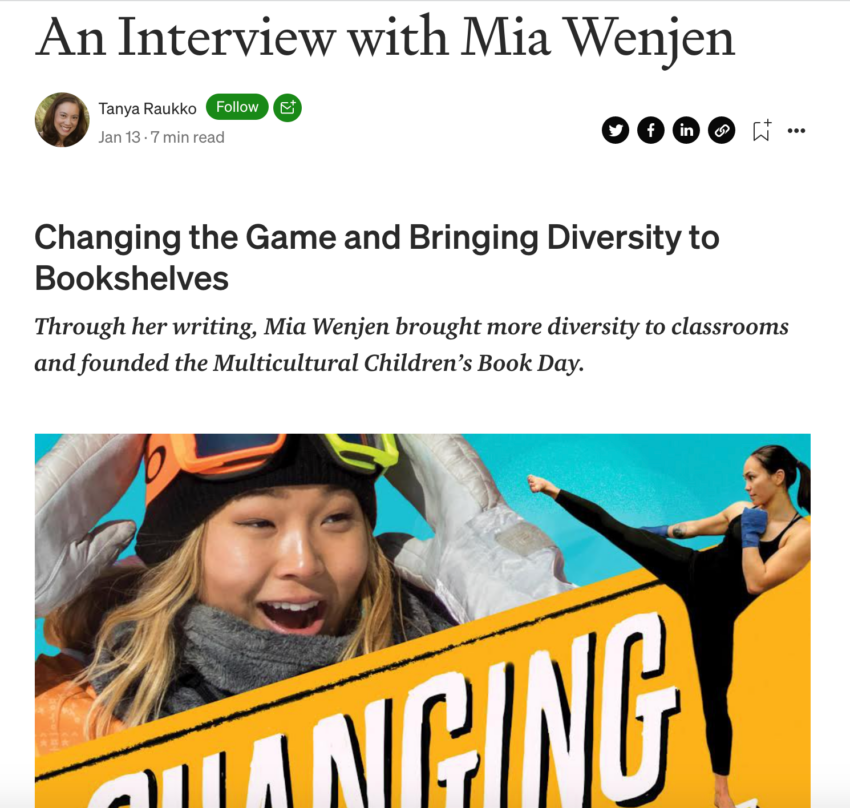 Thank you so much to Tanya Raukko for interviewing me about Multicultural Children’s Book Day in Medium.

An Interview with Mia Wenjen

Changing the Game and Bringing Diversity to Bookshelves

I was pleasantly surprised when I saw Mia Wenjen’s note to our alum community about a book she had authored, Changing the Game: Asian Pacific American Female Athletes”. Drilling down to research further, I noticed that Mia was also the founder of Multicultural Children’s Book Day, an organization whose mission is to raise awareness for books that celebrate diversity and get more of those books into classrooms and libraries. She is also the co-founder of Aquent, once a Harvard student startup that has turned into the largest global marketing and creative recruiting firm in the U.S.

During our conversation, she mentioned a story of her daughter, who couldn’t name a single Asian-American female athlete when prompted. This became Mia’s motivation to showcase many diverse role models, such as young, female, Asian-American athletes. Through books, she could demonstrate that all types of dreams are possible.

I was very excited to approach Mia to learn more about her plans, because our Make Noise Today initiative precisely aligns to this common objective to empower youth to champion racial equality by amplifying Asian-American stories. We can take control of our own narrative and promote racial equity by telling personal stories of our heritage and accomplishments, challenges, grit, inspiration, and culture.

What events led you to create Multicultural Children’s Book Day?

I stopped working full-time when I had my second child, now 19 years old, to be a full-time mother. When my third child turned 5 years old and he was in preschool five mornings a week, I decided it was now my time to do something for myself and started a blog, PragmaticMom.com. I focused on education and parenting because my oldest child, then in first grade, was having a tough year. Her teacher was absent often due to long-term illness and she had substitute teachers for substitute teachers. She fell behind in math and reading compared to her peers. I tried to catch her up on my own and the other first-grade parents in her class asked me what I was doing. I decided to chronicle it in my blog.

I also made book lists and because my children are Chinese, Japanese, and Korean American, I made a list for each ethnicity. My Korean American list was my first “viral” post — it didn’t get a ton of views but it was the most I received for my blog at the time. I have always loved children’s books so I decided to create more lists. Later, when I learned through Lee and Low Books that the number of diverse books for children published had not changed in 14 years, I decided to focus on this for my book lists. Valarie Budayr who also blogged on children’s books (her blog Jump Into A Book focused on extension activities for picture books) reached out and she suggested that we form our own holiday. I had no idea you could do that but Valarie said we could just pick a day and off we went.

Was it challenging to embark on these projects while building Aquent?

My role at Aquent during this time was limited to being on the Board of Directors and taking an occasional project, but my background is in marketing so blogging and social media were, to me, the future of marketing. I felt like I was keeping a toe in the business world by just being online.

How did you arrive at writing books such as Changing the Game: Asian Pacific American Female Athletes?

Valarie Budayr also had her own small publishing company, Audrey Press. When I got an idea to write a book to keep girls in sports based on my own two daughters’ experiences, I pitched my idea to her and she liked it. HOW TO COACH GIRLS and THE ELUSIVE FULL RIDE SCHOLARSHIP: AN INSIDER’S GUIDE were both co-written with Alison Foley, then the Varsity Head Coach for Boston College Women’s Soccer.

I took a children’s book writing class through my local community education program and wrote SUMO JOE for that class. I entered Lee and Low Books New Voices competition and didn’t win, but they offered to help me edit my manuscript and ended up publishing it in 2019. I loved working with them. Josh Funk invited me to The Writers’ Loft and I joined their picture book critique group. With their support, I started writing picture book manuscripts and got a lot of rejection.

Just from being online, I would get a lot of questions from people needing help finding a specific kind of diverse children’s book. One person asked me for Native American children’s book author recommendations. He later asked me for Asian American authors for middle grade nonfiction biography. I suggested myself. I ended up working with Lary Rosenblatt of 22MediaWorks to write ASIAN PACIFIC AMERICAN HEROES for Scholastic. When my middle daughter told me that there are no female Asian American athletes that she could think of, I was shocked because she was very sporty. I wrote CHANGING THE GAME: ASIAN PACIFIC AMERICAN FEMALE ATHLETES in response and self-published it through Kickstarter. I used the same team at 22MediaWorks including Lary, the graphic designer, and editor. Long story short, Lary ended up being my literary agent and I’m working on more picture book manuscripts and hope for some good news in 2022.

In writing your books, what surprising learnings did you have (about the subjects/heroes, society, culture)?

My biggest takeaway is how failure is often the impetus for success because it forces the person to evaluate and make significant changes. Things might have been going so-so before the failure which meant that the old way was sort of working. I think risk-taking and resilience are themes that successful people have in common. As for people of color, they have additional barriers that can include racism and poverty so I noticed that they dig particularly deep to fight for the manifestations of their dreams. I have also noticed how no one has a straight path to success in terms of being able to predict how it is going to go down. I think there is the element of surprise in that each person feels like I know this is where I wanted to go, but I had no idea that the road to get here would be so windy.

How can we best address challenges that parents face today in raising race and culture conscious children?

I love to use children’s books and food to introduce kids to new cultures. It’s a really fun way to learn about new countries and cultures while also learning about race. When my oldest was in first grade, she was learning how to read . I decided to find the best picture books by researching book lists and going to several public libraries several times a week. I would read 10 picture books a night to my three kids. Picture books worked for all three ages at the time (6, 4, and 2). Those picture books took us around the world and into children’s lives that we would not have experienced otherwise. I believe it made my kids more empathetic as well as made them more curious about the world. I see that now as they are older and have a desire to travel.

In what ways would you personally like to continue “Making Noise” in the near and long-term future?

It’s been so wonderful to see more BIPOC voices being celebrated in children’s book publishing but there is still a long way to go. I am excited to be part of that future.

How do you imagine and hope the world will be like for future AAPI generations in terms of celebrating diversity?

I would love for AAPIs to learn more and work harder to disaggregate AAPI from a lump sum to its constituent parts because we are not one homogeneous Asian group. Without disaggregating this group, it’s easy for stereotypes to persist such as “model minority.” We also need to address mental health and de-stigmatize it. We need our children to pursue careers outside of “doctor,” “attorney,” “engineer,” “accountant.” We need AAPI’s to be teachers, therapists, coaches, etc. We need this diversity so kids can get the support you get when they see themselves everywhere — in the media, in the schools, on the sports fields, etc.

Possessed of the same entrepreneurial spirit that has driven Aquent from the outset, Mia launched Aquent’s West Coast operations and grew the Los Angeles market into one of the company’s largest. Mia went on to oversee the Boston market, manage an internal startup aimed at the temporary placement of accountants, and serve as publisher of 1099 Magazine, the offline version of Aquent’s cheeky webzine for independent professionals, 1099.com. She blogs on parenting, children’s books, and education at PragmaticMom.com and is the co-creator of Multicultural Children’s Book Day, a nonprofit celebrating diversity in children’s books. 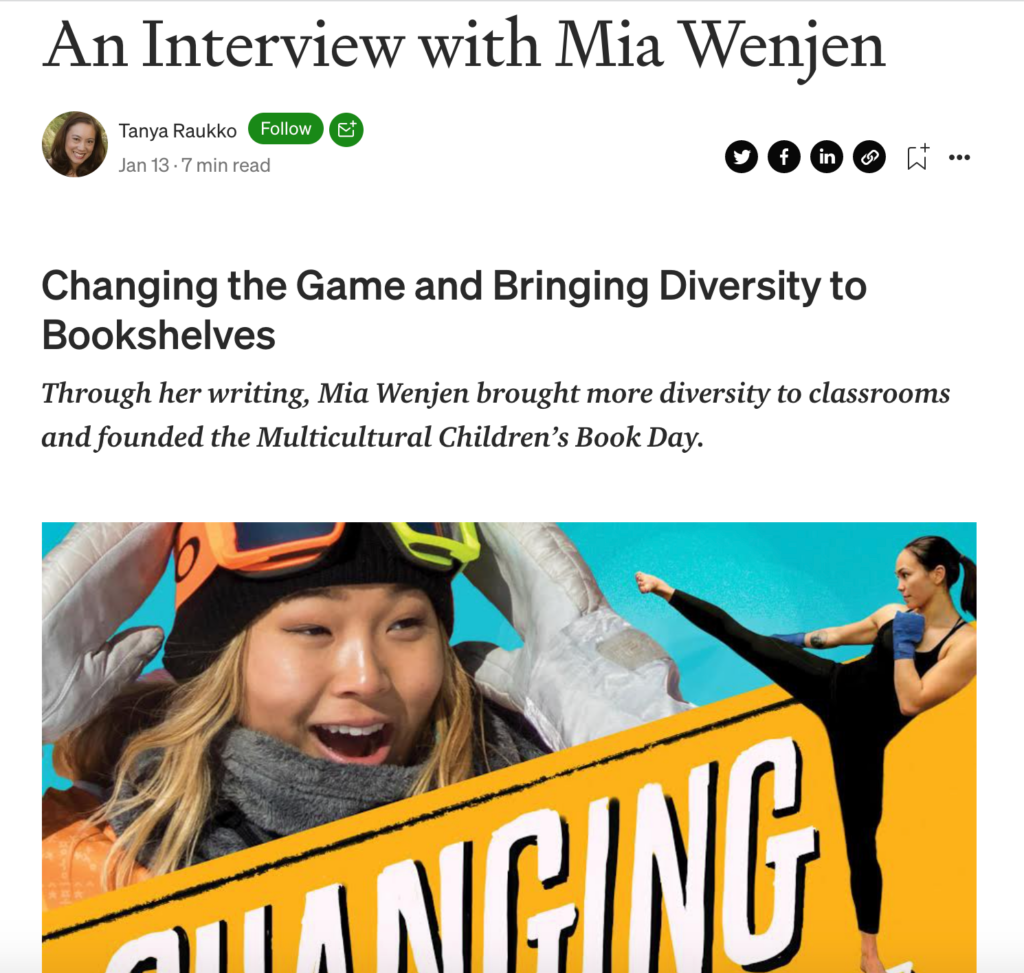 2 thoughts on “Thank you for interviewing me about Multicultural Children’s Book Day!”