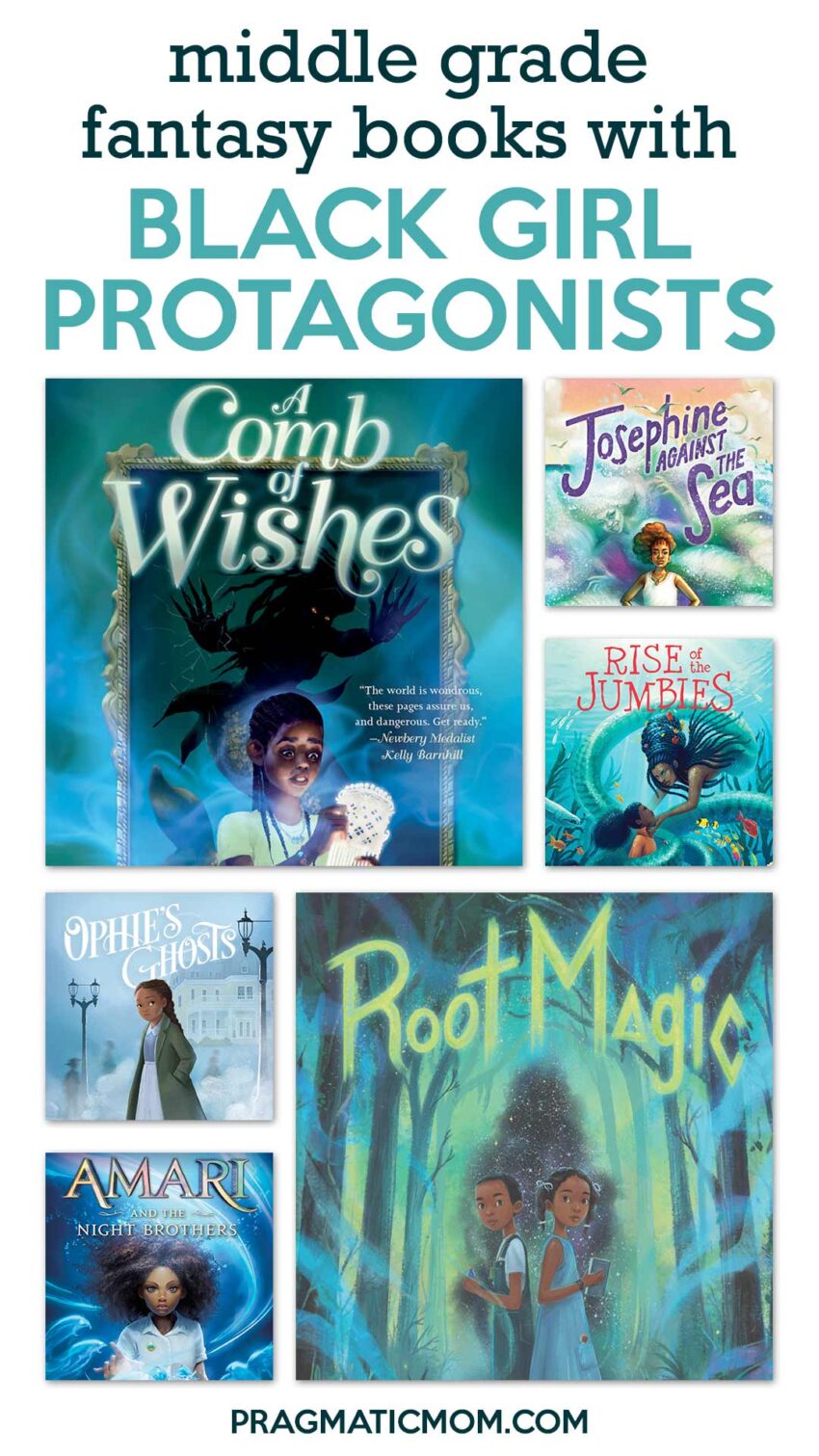 Please welcome my guest author today, Lisa Stringfellow. We both served on the Equity and Inclusion Committee for NE SCBWI (and what a crazy time that was!). The best part of the E&I committee was working with the committee members, especially Lisa Stringfellow! She’s awesome!

My next door neighbor’s daughter also had Lisa as her middle school English teacher, not once but twice! They are also big fans of Lisa’s. My neighbor’s daughter, who is now a junior in high school, said that Lisa used to mention a mermaid book that she was writing. I’m thrilled to be part of her debut middle grade blog tour for that very book!!

A Comb of Wishes by Lisa Stringfellow

Newbery-winning author Kelly Barnhill called it “one of the most promising works of fiction in a long time!”

When Kela and her friend Lissy stumble across an ancient-looking comb in a coral cave, Kela can’t help but bring home her very own found treasure. Far away, deep in the cold ocean, the mermaid Ophidia can feel that her comb has been taken. And despite her hatred of all humans, her magic requires that she make a bargain: the comb in exchange for a wish, but getting what she wants most comes at an unexpected price. [middle grade, ages 8 and up]

We are giving away A Comb of Wishes. To enter, please use the Rafflecopter at the bottom.

Brookline Booksmith celebrates the release of A Comb of Wishes with local author Lisa Stringfellow, in conversation with Wings of Fire author Tui T. Sutherland. 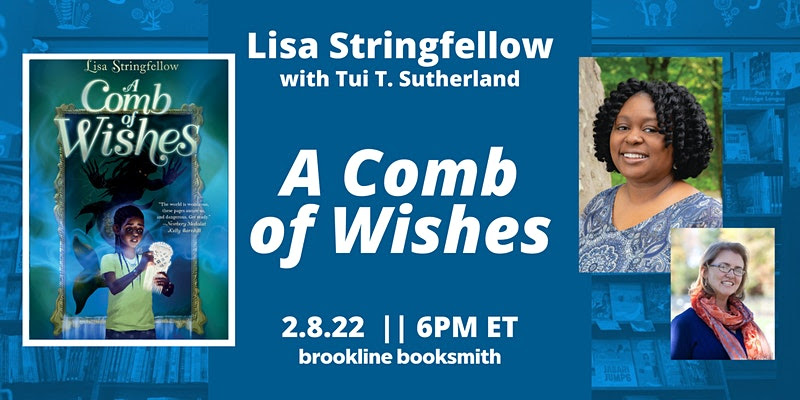 I was a voracious reader in school and practically lived in the library. Books were comforting and inspiring. I especially loved fantasies like A Wrinkle in Time, The Chronicles of Narnia, and other stories that involve magic and mystery. Unfortunately, when I grew up, there were few fantasies that featured Black girls like me.

Many people refer to the importance of books that serve as “windows and mirrors” for children, the metaphor coined by children’s literature scholar Dr. Rudine Sims. Not seeing yourself in books, especially as a protagonist who is off having amazing adventures, can make a child feel that those types of stories are not for them. They absolutely are!

I’m heartened to see so many more books being written and published by Black creators and that feature strong Black girls. Fantasy asks us to imagine what the world might be like if magic was possible or magical creatures existed. There’s no reason Black girls shouldn’t be leading those adventures!

I am excited to share five recent middle grade fantasy titles featuring Black girls as protagonists. All were published between 2017 and 2021.

A ghost story that blends contemporary and historical facts and sheds light on the realities of segregation. While playing in the woods near her home, Iris finds an abandoned grave that no one knew existed. After researching the area, she learns that it was once a segregated cemetery, now neglected and forgotten. But disturbing the grave has awakened the spirit of Avery Moore, the young girl whose grave Iris found. Although Iris tries to bring recognition to her discovery, it might not be enough to appease Avery’s ghost.

I love Iris’s persistence and the important history of segregation shared in The Forgotten Girl, as well as the need to correct wrongs of the past. [middle grade, ages 8 and up]

Josephine Against the Sea by Shakirah Bourne

A funny, contemporary fantasy that follows brave Josephine, a girl living in Barbados, who suspects that her father’s new girlfriend is more than she claims to be. Jo works to find the truth and keep her father safe and single while trying to convince him to let her join her school’s cricket team and prove that she can take care of herself.

Being part Bajan myself, I love how Shakirah Bourne draws on the culture and vibrancy of Barbados. The dialogue in Josephine Against the Sea rings true with the sounds of the island. [middle grade, ages 8 and up]

Dark and atmospheric, this middle grade historical fantasy follows the journey of twins Jez and Jay as they begin to learn their family’s Gullah Geechee tradition of rootworking. Intertwined with characters such as boo-hags, haints, and living dolls, is a necessary focus of racial prejudice and discrimination and the importance of community.

I enjoyed how Root Magic focused on family and traditions that are passed down through generations. This book is perfect for fans of Hoodoo by Ronald Smith. [middle grade, ages 8 and up]

Rise of the Jumbies by Tracey Baptiste

The second book in the award-winning Jumbies series, Rise of the Jumbies< continues to follow Corinne La Mer, who is half-Jumbie and half-human. Despite saving the village and her father from the jumbies, her neighbors can’t help but suspect her involvement when children go missing. Corrine must journey to the sea to find Mama D’Leau, the water spirit that rules the ocean, and ask for her help.

Rise of the Jumbies touches on the horrors of the trans-Atlantic slave trade in a way that is accessible for middle school readers. An important addition to school and classroom libraries. [middle grade, ages 8 and up]

Justina Ireland’s middle grade debut blends historical fantasy and the dark history of racial violence in the South. Ophie Harrison didn’t know she could see ghosts until the horrible night in 1922 when her father was killed, and he appears to warn her and her mother of impending danger. Now that she and her mother have moved to Pittsburgh to start over, she’s seeing ghosts again, this time in the house where her mother has taken a job as a maid. Ophie befriends one particular ghost who died unjustly and has to decide whether to help or let the past stay buried.

Ghost stories have always been a favorite of mine, but Ophie’s Ghosts highlights the importance of justice and reconciling with the past. [middle grade, ages 8 and up]

Amari and the Night Brothers by B.B. Alston

The first in a trilogy, the book introduces 13-year-old Amari who is lost without her big brother Quinton, who has mysteriously disappeared–and no one but Amari seems to care or believe he’s still alive. When Amari finds a ticking briefcase in Quinton’s closet, she realizes there was more to her brother than she knew. Inside is an invitation to try out for a spot in a secret organization called Bureau of Supernatural Affairs. Once she gets used to magical creatures, like dwarves and dragons, perhaps she’ll find the answers to what really happened to Quinton.

Amari and the Night Brothers is a fantastic addition to the canon of books about magical schools, and one that sets Black girls as the heroes of their own adventures! [middle grade, ages 8 and up]

A Comb of Wishes GIVEAWAY!

We are giving away A Comb of Wishes. To enter, please use the Rafflecopter below. We can only mail to U.S. and A.F.O. addresses. Lisa Stringfellow writes middle grade fiction and has a not-so-secret fondness for fantasy with a dark twist. Her debut fantasy A Comb of Wishes will be published on February 8, 2022 by HarperCollins/Quill Tree Books. It was selected as an ABA Indies Introduce title for Winter/Spring 2022 and Lisa received the inaugural Kweli Color of Children’s Literature Manuscript Award in 2019 for the novel manuscript. Her work often reflects her West Indian and Black southern heritage. Lisa is a middle school teacher and lives in Boston, Massachusetts, with her children and two bossy cats. To learn more, please visit her website and follow her on Twitter.