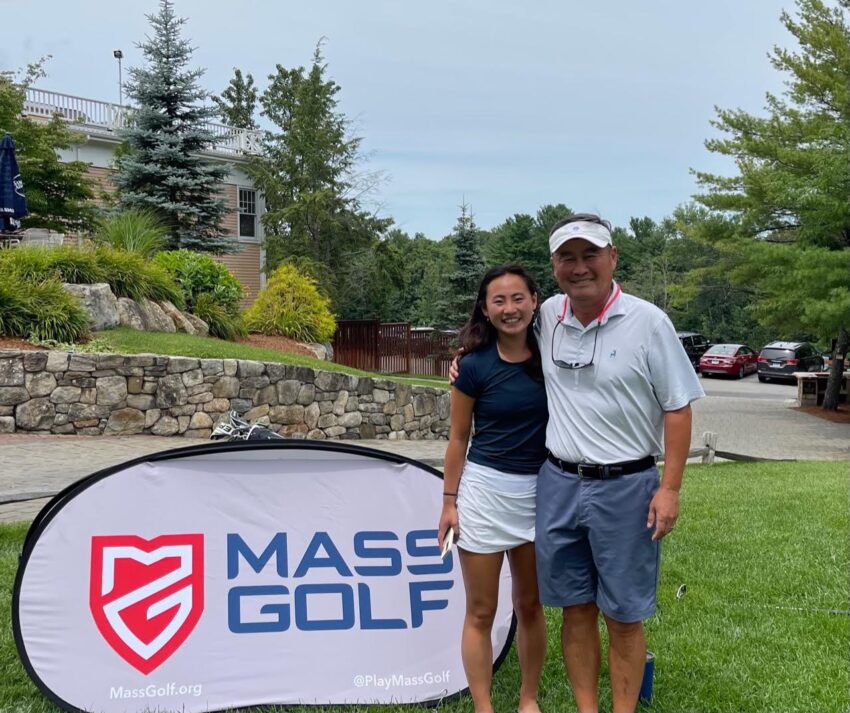 Tai and Ali Lee (Granite Links Golf Club) were solo third with a mark of 10-over 82.

My daughter and husband played in their third Father Daughter Mass Golf tournament in the Forward Division. She had been working at a sleepaway camp for five weeks prior to the tournament so she wasn’t able to work on her golf game. The previous year, she practiced intensively, hitting golf balls for at least one hour nearly every day for months.

The tournament was held at Shaker Hills Country Club. Though they didn’t get the win that my daughter had hoped for, there is no age limit so they can keep trying for years to come! Congrats to all the winners!

“The top five teams were all separated by just one stroke, but the team of Todd and Sydney Ezold (Twin Hills Country Club) emerged victorious by shooting 8-over-par 80.

The Ezolds had a strong start to their day posting pars on their first four holes. Despite a few blips in the middle of their round, they closed things out with consecutive pars on the 17th and 18th holes to stay just ahead of the competition and grab their first-ever win in the Father Daughter Modified Scotch format.

Todd and Sydney play frequently over the summer at their local Twin Hills Country Club, but this was their first competitive event together this season.

“This is the first tournament we’ve played together,” Todd said. “Sydney played college softball and she was really kind of late getting into golf, but the last couple of years she’s played a lot.”

In preparation for the modified scotch format, Todd and Sydney actually played the alternating shot style for at least nine holes a week at Twin Hills. That, plus a focused strategy, paid dividends for them on Tuesday.

“My daughter’s only been playing for a couple of years, but she drives it well,” Todd said of Sydney, who is 25. “For the most part, she was driving it well, and I was hitting greens. She was keeping me close with the putter, and we just kind of three-putted our way through. She just drove it really well again, and we were fortunate enough to make a couple of pars.”

As for sharing a title in a family event, “It’s fabulous,” Todd said. “Whether we won or lost today, it was awesome to just be out there competing with her. I enjoyed it very much and she did as well.”

Mike and Riley Casey (Charles River Country Club) came in just behind the Ezoldss at 9-over 81. Tai and Ali Lee (Granite Links Golf Club) were solo third with a mark of 10-over 82.” From MassGolf.org

My Husband Ties for 4th at Ouimet (and Funny Moment)