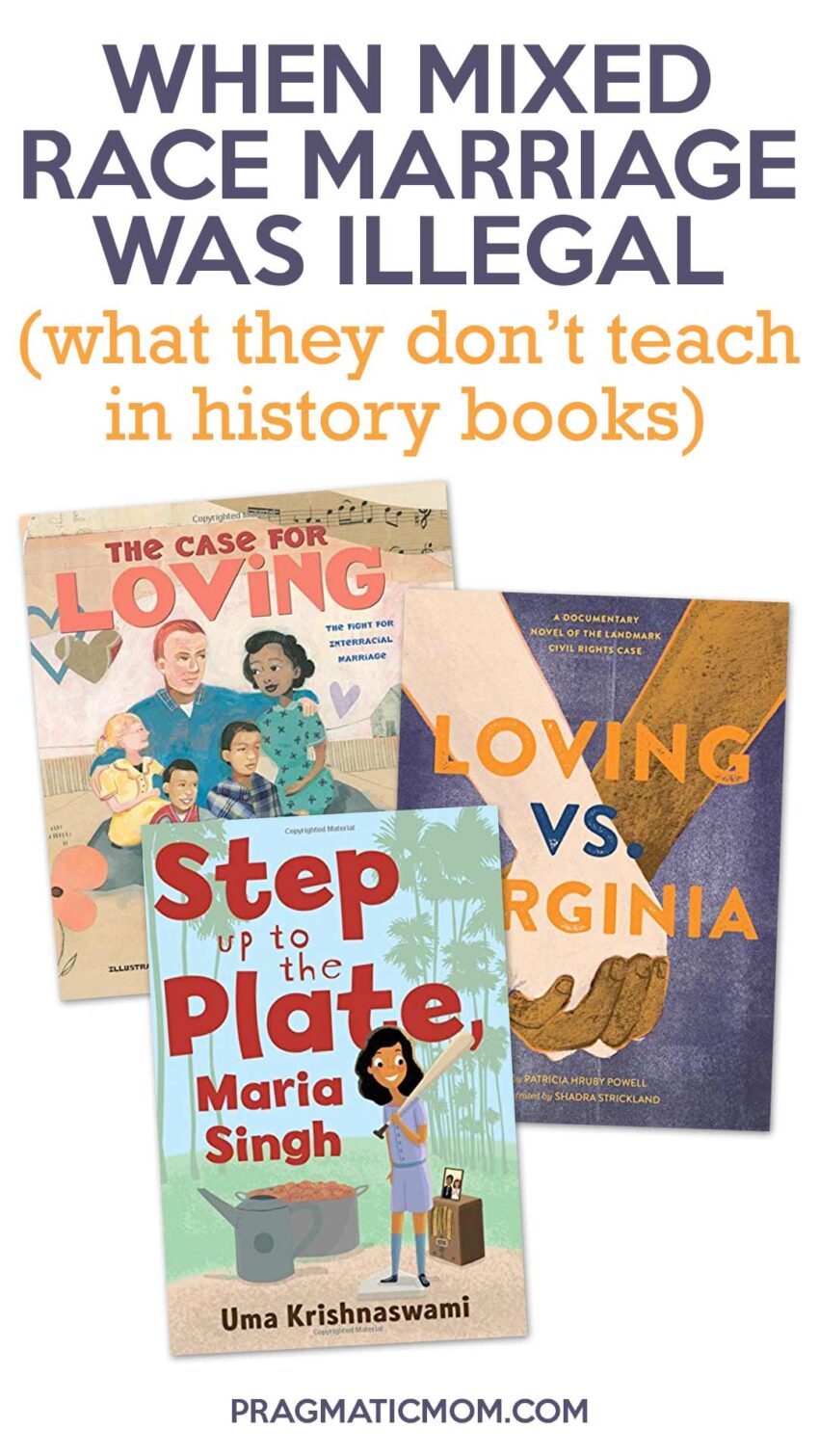 In other words, the laws to prevent mixed-race marriages worked to keep whites as the majority race in the United States.

Mixed-race marriages became illegal starting in 1691 in Virginia. The roots of this law were steeped in white supremacy. 275 years later, this law would be challenged by a couple with the fitting last name of “Loving”. In 1969,  Virginia’s tourism and travel slogan, “Virginia is for lovers”,  would become one of the most iconic ad campaigns in the past 50 years.

Typically defining miscegenation as a felony, these laws prohibited the solemnization of weddings between persons of different “races” and prohibited the officiating of such ceremonies. Sometimes, the individuals attempting to marry would not be held guilty of miscegenation itself, but felony charges of adultery or fornication would be brought against them instead.

Children’s Books on When Mixed Race Marriage Was Illegal

The Case for Loving: The Fight for Interracial Marriage by Selina Alko, illustrated by Sean Qualls and Selina Alko

Imagine not being able to marry the person you loved, just because they were of a race different from your own.

Even after slavery ended, some white people weren’t used to blacks being free, let alone free to marry whom they chose.

If you married someone who had skin color unlike your own, you could go to jail.

This is the story of Mildren and Richard Loving who challenged the law that made interracial marriage illegal. In 1966, the Lovings hired lawyers to fight against this law that was created to preserve the “purity of the white race.”  Their case made it all the way to the Supreme Court where the justices ruled unanimously in favor of the Lovings.

I love that this picture book was created by an interracial couple; Sean Qualls is a black man and Selina Alko is a white Jewish woman. [picture book, ages 4 and up]

Loving vs. Virginia: A Documentary Novel of the Landmark Civil Rights Case by Patricia Hruby Powell, illustrated by Shadra Strickland

2017 marks the 50th anniversary of the landmark case that made mixed-race marriages legal. That Richard and Mildred’s very last name is “LOVING” and that their crime is loving each other says something about fate perhaps. In 1955, in Virginia — state slogan: Virginia is for Lovers (formerly Virginia is for history lovers)– two teenagers fell in love amidst segregation, racism, and cruelty.

Their marriage broke a Virginia 1924 law to preserve racial integrity and keep children of partial white ancestry out of all-white schools. The fact that this law implied that one race was superior to another — this legislation allowed Negroes to marry those of other races, thus subjecting them to losing their racial purity — was an inconsistency that won their case.

It took nine long years during which they lived in exile in Washington DC for them to win their case. Told in mesmerizing free verse that makes you feel like you’ve stepped back in time, this chapter book is as important as their landmark case. [Novel in verse, ages 8 and up]

Step Up to the Plate, Maria Singh by Uma Krishnaswami

Nine-year-old Maria Singh longs to play softball in the first-ever girls’ team forming in Yuba City, California. It’s the spring of 1945, and World War II is dragging on. Miss Newman, Maria’s teacher, is inspired by Babe Ruth and the All-American Girls’ League to start a girls’ softball team at their school. Meanwhile, Maria’s parents–Papi from India and Mama from Mexico–can no longer protect their children from prejudice and from the discriminatory laws of the land. When the family is on the brink of losing their farm, Maria must decide if she has what it takes to step up and find her voice in an unfair world. In this fascinating middle-grade novel, award-winning author Uma Krishnaswami sheds light on a little-known chapter of American history set in a community whose families made multicultural choices before the word had been invented.

Videos on the History of the Laws Against Interracial Marriage

Why were the races separated by law in America?

A look at Idaho’s interracial marriage laws over the years

1 thought on “When Mixed Race Marriage Was Illegal: What They Don’t Teach in History Books”