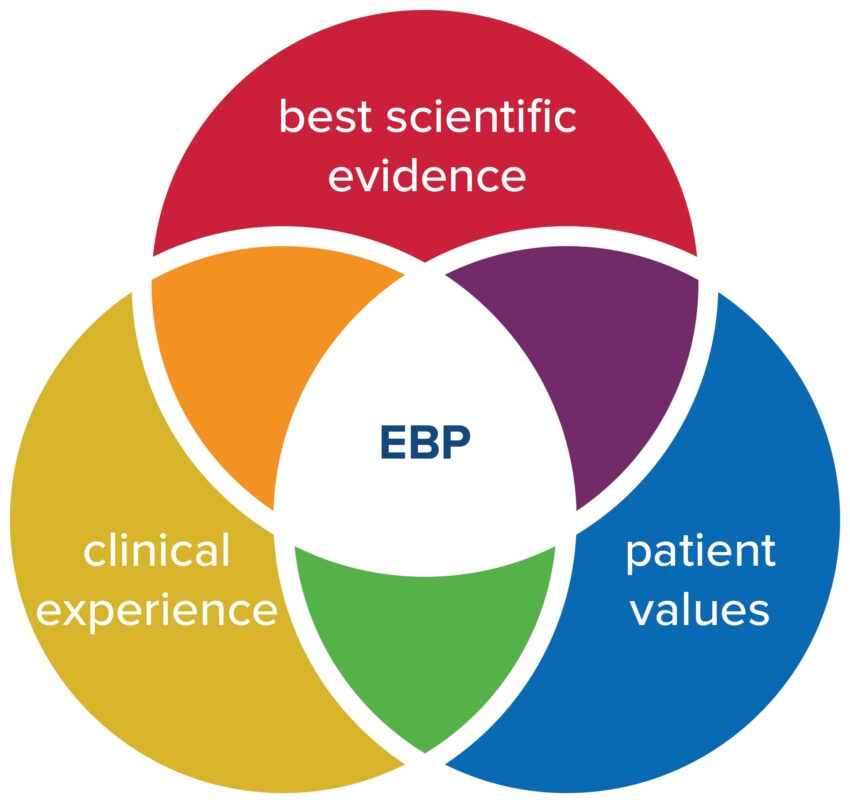 Evidence-based practice (EBP) is a really important idea in nursing that is a key component of exceptional patient care. EBP in nursing is an integration of research evidence, clinical expertise, and a patient’s preferences. This problem-solving approach to clinical practice encourages nurses to provide individualized patient care.

Evidence-based practice describes a wider, more encompassing discipline, as compared to the original term evidence-based medicine (EBM). The concept of EBM was made a part of medical studies in 1991, but it wasn’t till 2005 that a more inclusive approach was taken. It was found that similar principles can be followed in more fields of healthcare than just medicine.

The Sicily Statement on Evidence-Based Practice was published in 2005, and it defined EBP in a
similar manner, albeit with slight modifications to make it applicable in fields other than just medical practice. It states that decisions regarding a patient’s healthcare should always be taken on the basis of relevant, recent, and verified evidence.

However, the patient should be presented with the same evidence as well before finalizing any plan of treatment. The evidence and the best possible treatment paths must be simplified and explained to a patient by concerned healthcare professionals so that the patient can take an informed decision.

It should be noted that a long, long time before evidence-based practice became a discipline,
Florence Nightingale had successfully used similar ideas to treat soldiers during the mid-1800s. Of
course, EBP in nursing has come a long way since then, but her work in later life is considered to
have laid the foundations of modern nursing. Today, evidence-based nursing education and practice center around a few broad steps, such as:

Value Establishment and Preparation – Often referred to as Step 0 in EBP, it involves establishing the importance, benefits, and value of following evidence-based practice in the mind of nursing students. Step 0 is about preparing them to embrace the Spirit of Inquiry.

Training in EBP – Training nurses in EBP so that they can gain the knowledge and skills required to successfully implement the discipline inpatient care.
PICOT – The five aspects of creating a patient inquiry are called PICOT in short. The letters stand for:

Gathering Evidence – Evidence can be gathered from lab exam results, relevant research data from previous clinical trials, epidemiologic data, case studies, and more.
Scrutinizing Evidence – Once the evidence has been gathered, it must then be scrutinized further for specific relevance to the case in question, validity, and efficacy.
Using the Evidence to Find Treatment Options – To find the best possible treatment options from the verified evidence, several factors must be considered. These factors are variable, but the following two are general constants:

Evaluation of the Outcome – The outcome of an evidence-based treatment procedure must be
evaluated so that healthcare providers can learn from the results. It is essential to identify and
eliminate errors, as well as to identify and establish successful steps.
Share the Evaluation – The only way for evidence-based healthcare to grow is through sharing these evaluations. This ensures that the efficacy of EBP increases continuously and universally. Thanks to the internet, this is not as difficult as it used to be. Online presentations and conferences, online sharing, and posting of case studies in journals are common methods of dissemination in EBP.

Why is Evidence-Based Practice Considered to be the Number One School of Thought?

There is a lot of controversy regarding the conflicts between evidence-based practice and other
schools of thought. Nevertheless, EBP has emerged as the only logical method of practice in most
cases. Earlier, eminence (renown) based medicine depended entirely on the healthcare
professional’s experience and reputation.

It was not uncommon for experienced healthcare providers to depend too much on their prior
experience rather than medical evidence. As a result, misdiagnosis and mistreatment were more
common than they are today. Due to a lack of established structure behind such treatment plans, it is only natural that they were often prone to failing. Failures of the type are not totally absent these days, which would now qualify as medical negligence.

The only exception would be scenarios where no medical evidence is available or can be procured in time. Surgeons often have to make quick decisions on the operating table if something does not go according to plan. In such instances, experience and expertise play a crucial role in deciding the outcome.

The Benefits of EBP

By now, it should be clear that EBP is the only logical method of formulating a treatment plan, as it is based on medical evidence and not guesswork. If we were to identify the specific advantages which the discipline added to healthcare, they would be as follows.
Structure – EBP is a structured, step-by-step procedure for finding the best possible treatment and care plans for each patient. The standardized protocols are evidence-based and verified, so the final treatment plan naturally has a higher chance of success.
Current and Relevant – Evidence in the form of lab exam results and the latest findings are
backbones of EBP treatment and care. Opinion-based treatment plans are often recommended by
senior professionals, which is an outdated method because:

If a patient is not content with the outcome of an evidence-based treatment plan, they can consult
their lawyer and check for discrepancies between the steps that were supposed to be taken based
on the available evidence, and the steps that were actually taken. At the same time, if the clinician
did follow all standardized protocols of EBP, they are much less likely to be sued by disgruntled
patients.

Improved Chances of Positive Outcomes – When treatment and care plans are in complete sync with the latest medical facts, patient preferences, and sound real-time evidence, they are far more likely to succeed. In the absence of evidence, it is better to wait, if that is an option. Uneducated guesswork can do more damage than good in most cases.
Customization – Before EBP, patients were not made privy to their own treatment plans, which
meant that they had little to no say in the final course of action. As we explained in the definition of evidence-based practice itself, involving the patient is a critical part of the whole approach.

Based on the specific situation, the care plans can be customized to better suit a patient and
improve his/her chances of recovery. The medical language will need to be simplified, of course,
which is part of an EBP healthcare provider’s duty.

Increased Safety – Patients being treated under evidence-based practices are proven to be a lot
safer while staying at a hospital or healthcare clinic. For example, hospital-acquired infections (HAI) affect roughly 1.7 million patients every year in the US (average), killing 99,000 people in the process. However, hospitals with active standardized evidence-based protocols managed to prevent two primary types of HAIs by 60% and 50% respectively. For more information, check out the 2015 AHRQ program which made it possible.

EBP is verified as playing a big role in lowering mortality rates in infants and seniors. There are other examples as well, but these two are the most profound achievements.
Traumatic Rib Fractures in Seniors – Patients suffering from traumatic rib fractures, who were aged 65 or more, have a higher survival rate when treated with:

Each of the three methods is evidence-based practices, which have been verified and established
as standard procedures to treat seniors with three or more rib fractures.
Pre-Term Infant Deaths – Four EBP methods were used across several European hospitals to lower death rates among preterm infants. They are as follows:

1. Maintaining continuous nasal positive airway pressure within the first 2-hours from the
infant’s time of birth.
2. Active and verified measures to prevent hypothermia.
3. Use of antenatal corticosteroids, as required.
4. Ensuring that the hospital has access to the latest equipment, necessary for neonatal care.

Whether as a DNP nurse clinician, or a doctor, healthcare providers can and do deliver better results, as compared to outdated methods used in previous decades. In due time, the shared database of knowledge and the verified evidence-based approach will prove to be instrumental in improving the quality and efficacy of healthcare in general. It is the only way forward for medical diagnosis and treatment overall.

Have You Heard About Inflammatory Breast Cancer?