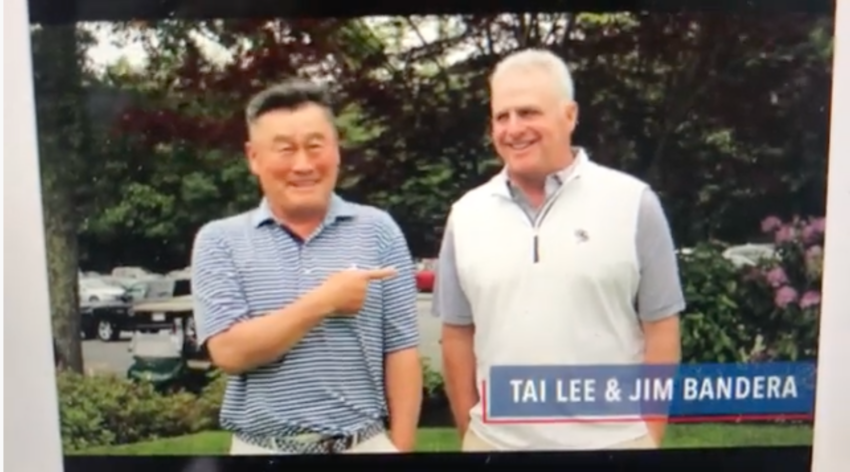 My husband placed second at the Massachusetts Senior Four-Ball, a two-day event held at Walpole Country Club and Foxborough Country Club this year. He met his partner, Jim Bandera, at a Senior Amateur event last year. They really hit it off and partnered for the first time at this event. My husband is 55-years-old, making this his first year of eligibility.

This post is part of the video scrapbook for my family that I keep here on my blog. I tell myself that one day, my kids (or even their grandkids) will be happy to pull this up and see their dad playing golf as a senior amateur!

How about you? How do you preserve memories for your family?

WALPOLE | FOXBORO, Massachusetts – By the time they reached the 18th hole at Foxborough Country Club on Wednesday, it looked as though Keith Smith (Franklin Country Club) and Steve Tasho (Thorny Lea Golf Club) were in a strong position to win the 24th Massachusetts Senior Four-Ball Championship. But they still finished things off in style as Smith chipped in for birdie off the back lip of the fringe to put an exclamation point on the victory, with the team shooting a two-day total of 7-under-par 136.

Tai Lee (Granite Links Golf Club) and Jim Bandera (Plymouth Country Club), who were tied for the lead after Round 1, held sole position of second place by shooting a two-day score of 138 (5-under).

The Super Senior Division belonged to Jim Ruschioni (Wachusett Country Club) and Paul Nunez (Ludlow Country Club), who used a strong second-round effort to come in late and wrap up the honors by shooting a 139 (4-under).

Keith Smith is no stranger to success at Mass Golf events, and Senior Four-Ball in particular. He won in 2014 playing with Dave Turgeon, and now he’s back on top with Tasho, a two-time Mass Amateur champion. “This is a great win,” Tasho said. “There’s a lot of great teams and players in the state. It’s just great, it’s a lot of fun.”

For the pair, the win was a result of splitting strong play and also burying some clutch shots.

In their second round, at Foxborough Country Club, both men recorded two birdies. The most decisive shot of the two rounds came from Smith on the 11th hole Wednesday. The hole plays as a par-five, and Smith was able to hit his second shot up onto the green using a hybrid. From there, he knocked in an eagle putt to solidify the group’s positioning on the leaderboard.

“Steve had flopped the ball in there about four feet, so for me, I figured that we already know we got birdie,” Smith said. “It made my putt a little bit easier. That one got us to 5-under for the day, which really, you start finding a comfort zone when you realize you’re in the hunt, so that was a big catapult forward. It was tough out here. You still need to pay attention. T holes will jump up and bite if you get on the wrong side of the green.”

The eagle jumps out on the scorecard, and the late birdie was a fitting end to the competition, but Smith and Tasho credited the success to remaining consistent over the two rounds of play and playing their best golf late.

“Steve’s incredibly consistent, always in play, a great putter,” Smith said. “So, it made my job a little bit easier, took some of the pressure off me. But we brother-in-lawed it pretty good. We tried to give ourselves as many multiple chances for birdies as we could. We felt like we left a couple out there, they didn’t roll our way, but we had enough in the end.”

“We hit a lot of green and so we had a lot of opportunities in the two days,” Tasho added. “It was just a matter of who was putting for us, whose putt fell and whose didn’t with the birdies. We were pretty consistent, tees to green all week.”

After their first round of play at Foxborough Country Club on Tuesday, Jim Ruschioni and Paul Nunez were even-par and three strokes off the lead. In the second round at Walpole, they found their stride. Three birdies from Nunez and two from Ruschioni helped propel them to a 4-under-par closing round, earning them the Super Senior Division title for players aged 65 and older.

“We’re both 73 years old, so to be able to compete at this level, that’s just a bonus for us,” Ruschioni said. “We enjoy each other’s company, and we keep saying every year, this is the last year, but now we’ll have to come back again after this year.”

Ruschioni and Nunez are no strangers to winning the Senior Four-Ball. The two have four championships (2003, 2004, 2008, 2009) between them, but this is their first time winning the Super Senior Division since its inception in 2017. After Round 1, they were looking up at Jon Fasick (New England Country Club) and Carter Fasick (Westborough Golf Club) on the leaderboard, but they just remained focused and played their game in round two.

“We just knew where we stood after yesterday’s round,” Ruschioni said. “To be honest, when the Fasicks were 3-under at Walpole, I figured they’d come [to Foxborough] and be under par, So, we just hung in there, and we birdied two out of the last four holes, posted our score, and they said you got the Fasicks by one. I was surprised at that. They’re a premier four-ball team.”

The win for Ruschioni and Nunez snaps a run of two straight years the Fasicks had won the Super Senior Division. Beyond winning, they were just happy to have the event back after last year’s cancellation. “I’m glad to have everything back,” Nunez said. “It seems like we’re getting back to some normalcy.”

Tai Lee and Jim Bandera had never played golf together before as partners, but their first time doing so proved to be a major success. They topped the leaderboard after Round 1  and ended up finishing in sole possession of second place. After connecting at a Senior Amateur qualifying event last summer, the pair hit it off and were jumping at the chance to compete together.

“He’s a very good golfer, but he’s a nicer guy,” Bandera said. “And that’s hard to do when you play as well as he does. If you don’t have fun playing golf with him, you should give up the game.”

Lee and Bandera have terrific chemistry. In addition to playing well on the course, they have a lot of fun together along the way.

“We just clicked and it was a lot of fun even though we played terribly,” Lee said when reflecting on meeting at last summer’s qualifier event. “He didn’t play well and I was like, this is the guy I want to partner with because anything I do is going to be good,” Bandera joked in response. Going forward, the pair is definitely looking to continue playing together and perhaps even pick up a victory at some point along the way.

After a busy scramble for the lead, the teams of Tai Lee & Jim Bandera share the lead with Ray Richard & John Hadges after Day 1. But defending champions Kevin Carey & Joe Walker are just one stroke back and in the hunt.

Keith Smith & Steve Tasho rallied in the final round to capture the 24th Massachusetts Senior Four-Ball Championship with a score of 7-under. Paul Nunez and Jim Ruschioni also rallied to win the Super Senior Division. Tai Lee and Jim Bandera came in solo second.

Happy 20th Anniversary to My Husband!

Dating My Husband All Over Again