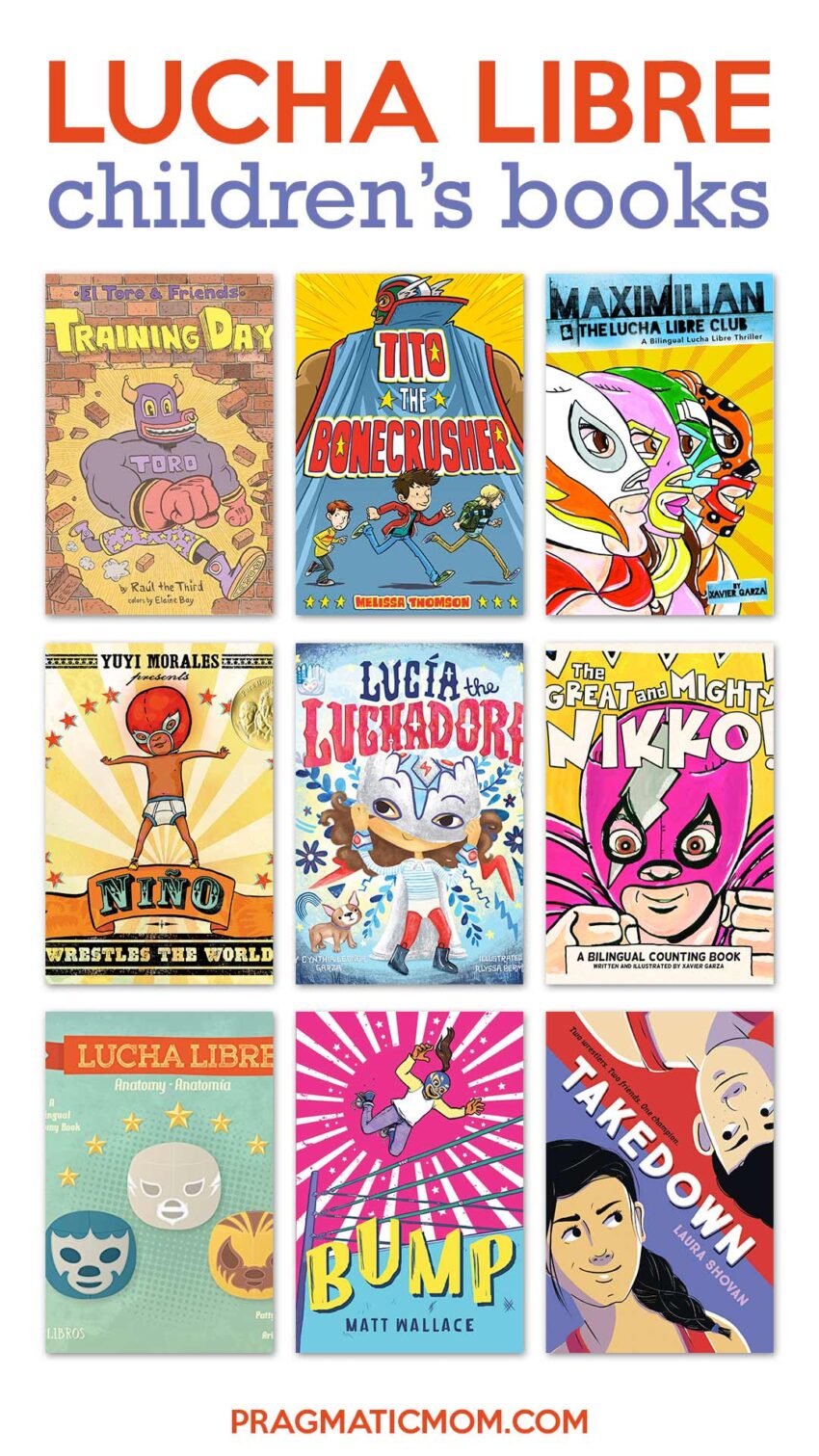 Wrestling fans of all ages will delight in Lucha Libre children’s books which bring Latino culture to the ring. And, in the spirit of Title IX, let’s give some love to the female athletes who also bring the same level of excitement to the sport of Lucha Libre.

Lucha Libre books are a fun way to learn about Latino culture! It’s difficult to read these books and not become a fan!

Learn parts of the body in this bi-lingual Spanish board book. The Lucha Libra images are a fun way to illustrate this concept! [board book, ages 1 and up]

The Great and Mighty Nikko by Xavier Garza

Learn to count in both Spanish and English in this graphic novel-inspired picture book. Nikko’s bed has been invaded by luchador figures — ten in all! It’s 9 versus 1 in the final match, and then it’s time for bed! [picture book, ages 3 and up]

From my blog post, Ten Picture Books That Spark Courage:

Lucia is fearless and awesome, but when classmates tell her that girls “can’t be superheroes” she loses some of her pluck. With the help of her grandmother, she explores her family’s Luchadora heritage and claims her place. Great messages of being strong, sticking up for yourself, with an anti-bullying story. Fast-paced and super fun!  [picture book, ages 4 and up]

Lucia the Luchadora and the Million+ Masks by Cynthia Leonor Garza, illustrated by Alyssa Bermudez

At the Mercado, Lucia spots lucha libre masks. Her little sister Gemma wants to be a Luchadora like Lucia. Helping Gemma find a mask makes Lucia realize that the best adventures are shared. [picture book, ages 4 and up]

From my blog post, Top 10 Latinx Books For Kids:

This is a really fun picture book to introduce kids to Hispanic culture through lucha libre wrestling!

Yuyi Morales mixes in Hispanic lore sure to lure kids into wanting to learn more:

Training Day (El Toro and Friends) by Raul the Third

The training regimen of a luchador is intense so it’s easy to see why El Toro might not be in the mood to train. His trainer, Kooky Dooky, has a plan to get him out of bed and ready to work. El Toro is inspired by his fans and ends up working hard during his training camp for his match against The Wall. His trainer did a good job and El Toro is ready for his fight! [picture book, ages 4 and up]

The story starts out with middle school drama in the form of a love triangle between young Max, his girlfriend Cecelia, and the new girl Paloma. If awkward 6th-grade crushes are not your thing, keep reading! Readers are about to enter the inner sanctum of Lucha Libra culture, with a behind-the-scenes peek into the lives of Lucha Libre greats. Max also gets a front seat when he gets invited to a private club for the younger generation of Lucha Libre relatives. The love drama seems to follow Max around, as his love triangle problems expand to include the ex-boyfriend Paloma’s. And Max’s own feelings need to be sorted out between Cecelia and Paloma. My favorite part of this book is the passing of the baton as older Lucha Libre stars retire from the ring, opting for new roles within the wrestling world, making room for the next generation. This series does a wonderful job of tearing the masks off the Lucha Libre world, making it even more enticing! [bilingual Spanish middle grade, ages 8 and up]

Tito the Bonecrusher by Melissa Thomson

I find that I have questions about the connection to Lucha Libre in this book. Is there a reason to use Luche Libre wrestling versus WWE in the plot? What is the ethnicity of Oliver and his family? There are hints that they are Latino, perhaps Mexican American? For example, Oliver looks “different” from the adults in the commercial shoot. His mother cleaned houses for a living and his father worked in restaurants and is now in jail. And, in the cover illustration, Oliver has a darker complexion than the two white characters next to him. These oblique references to Latino heritage are a little problematic for me because I feel like it is a racist trope to cast Mexican Americans as house cleaners and restaurant kitchen workers.

Also, while I like Karl as a character, he married Oliver’s mother and brought them up in the social rank so that they can now live in a fancy neighborhood and attend private school. That’s another troubling storyline for me. It implies that success for a Latina woman is through marriage to a “white savior.”

Other than the Lucha Libre wrestling, there aren’t any other references to Latino culture. Is that because Oliver and his family are white? Or that they are trying to fit into a rich white neighborhood? Or that their ethnicity is meant to be only hinted at?

The plot of the story turns on Oliver and his friends cooking up a complicated plan to bust his father out of jail so that he can attend Oliver’s sister’s high school graduation ceremony. His motley crew of co-conspirators plan an over-the-top mission that goes remarkably smoothly until it doesn’t.

The story carefully skirts ethnicity while borrowing Lucha Libre, a proud example of Latino culture, as the basis for the plot, and yet it still manages to include harmful racist stereotypes. I wish the plot would have revolved around a white WWE wrestling hero or have been more committed to portraying Latino culture and representation in a more authentic way. If Lucha Libre was simply a way to inject diversity into an otherwise white story, it’s an example of what not to do. And that’s a shame because the author, Melissa Thomson, writes beautifully, creating interesting characters and a fast-moving “Ferris Bueller’s Day Off”-type of adventurous plot. [middle grade, ages 8 and up]

“MJ is having a hard time of it. Her father is no longer with the family, and because of this, she and her mother have moved to a smaller apartment. At school, members of the gymnastics team are nasty to her, and since she isn’t participating anymore, she’s finding it hard to find friends to sit with at lunch. When she realizes that there is a wrestling ring in her neighbor’s yard, she goes to investigate, only to have Mr. Arrelano yell at her. He later comes to apologize, and MJ, who has watched Lucha Libre wrestling avidly for a long time, is thrilled that he runs a wrestling school called Victory Academy. Even though she is young and small, she convinces “Papi” (Mr. Arrelano) to let her train. Her mother isn’t thrilled but lets her do it. The training is everything that MJ wants, and even the sore muscles from “bumping” (falling onto the floor in order to avoid injury). Eventually, she enters a fight because someone is unable to make it, and her use of gymnastics causes the video of the event to go viral. This causes a lot of mixed emotions– some other wrestlers are jealous, Papi is worried about her safety, and MJ herself is afraid to let her mother know how much she is wrestling. Mr. Corto, who has been fining the gym for numerous minor infractions and trying to close it down, decides that MJ is being endangered after she almost catches someone releasing rats at the gym, and tries to close down Victory Academy. Can MJ make peace with her father’s absence, the mean girls at school, and her participation in wrestling while trying to solve the mystery behind the threats to the gym?” [middle grade, ages 8 and up]

Takedown is not a Lucha Libre story, but I include it for wrestling fans, especially those who want to see more girls and women in the sport!

From my blog post, 10 Upcoming Middle Grade Novels of Self-Discovery:

Mikayla and Lev are talented wrestlers, equally determined to make it to the state championships. But when they’re paired together as partners it’s not so easy since only one of them can win. There’s an added challenge for Mikayla, a girl competing in a traditionally male sport. Both kids set off on a journey to discover what they’re capable of in this spirited book about family, friendship, and breaking stereotypes. [chapter book, ages 8 and up]