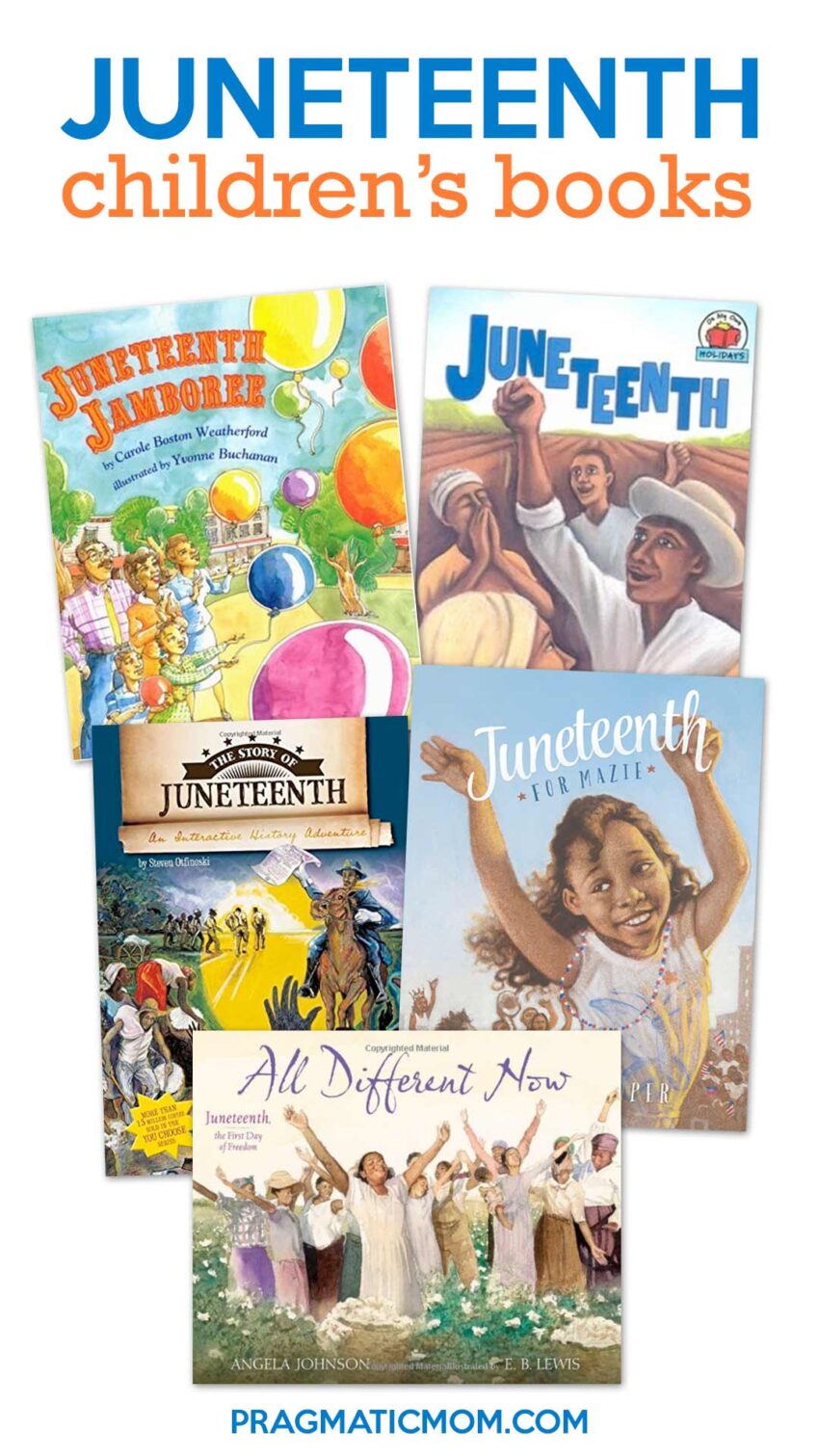 Juneteenth gets its name from the combination of June and Nineteenth and is celebrated annually on June 19. It’s also called Emancipation Day and Freedom Day. Abraham Lincoln signed the Emancipation Proclamation on Jan. 1, 1863, announcing enslaved people “shall be then, thenceforward, and forever free,” but the proclamation didn’t immediately apply in certain areas, including secessionist states like Texas, which had left the Union and joined the Confederacy during the Civil War.

It took another two years for the change to be enacted in Texas. The Civil War ended in April 1865 and two months later, on June 19, 1865, Maj. Gen. Gordon Granger of the Union Army issued General Order No. 3 in Galveston, Texas, with Granger saying, “The people of Texas are informed that, in accordance with a proclamation from the Executive of the United States, all slaves are free.” from NBC Boston

Are you celebrating Juneteenth where you live? My daughter’s friend organized a rally in Newton’s Heartbreak Hill!

“For decades we have marched,” said organizer Daniela Divo in a statement. “We have marched for civil rights. We have marched for equality. Now we march for justice. We must be the generation to break the infinite chain of injustice and oppression in this nation. We do not want to inherit or perpetuate the painful legacy that terrorizes our families, friends, and communities.”

Divo said the aim of the march is to combat ignorance through education. from The Newton Patch

Juneteenth is a holiday that is finally getting its due. I hope that schools everywhere will celebrate by learning more about this important milestone in American history. In 1980, June 19th was made a legal holiday in Texas. Perhaps more states will follow suit!

What happened when the enslaved in Texas first learned that they were free? Sojourner Kincaid Rolle writes in lyrical free verse, evoking that day in the Lone Star State and how everyone celebrated. This beautiful picture book belongs in all classroom libraries! [picture book, ages 4 and up] 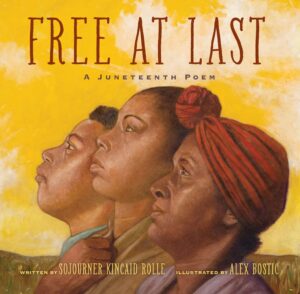 Opal Lee and What It Means to Be Free: The True Story of the Grandmother of Juneteenth by Alice Faye Duncan, illustrated by Keturah A. Bobo

Freedom is a golden coin. Struggle makes it shine.

The Juneteenth holiday didn’t happen on its own. Opal Lee tells the story in this picture book of what it was like during enslaved times in Texas, the day of emancipation, and what life was like for her during the Jim Crow times. When she was twelve years old, her family’s brand new home was burned down on Juneteenth, and this inspired her to fight for freedom. Her efforts resulted in national recognition for Juneteenth. She continues to walk for freedom at the age of 90! [picture book, ages 6 and up]

This is Carole Boston Weatherford’s first published picture book. Interest in the Juneteenth holiday prompted a reprint of this book! Cassandra’s family has moved to Texas and she’s not sure if she’s going to like it here. Her parents are preparing a feast for a surprise but they won’t tell Cassandra what the event is. When they go into town, they find a big celebration for Juneteenth. Carole Boston Weatherford weaves in the history of Juneteenth seamlessly into Cassandra’s story of moving to a new town and making a new friend. [picture book, ages 6 and up]

Juneteenth for Mazie by Floyd Cooper

Black people still struggled to stand shoulder to shoulder with white people. They still weren’t treated as equals. It wasn’t easy, but they never gave up. And every year on Juneteenth, they remembered.

Maisie remembers her great-great-great-grandpa Mose as she celebrates Juneteenth with her family. His story from enslavement to freedom is sensitively told, as is the message that there still work to be done for Black people to be treated as equals. [picture book, ages 6 and up]

All Different Now: Juneteenth, the First Day of Freedom by Angela Johnson, illustrated by E. B. Lewis*

Angela Johnson takes us back in time to when a little girl and her family first learned about how things would be different in this moment of emancipation. The declaration of freedom was delayed in some states including Texas, where this book is set. It would be two additional years until the announcement in Galveston, Texas of President Lincoln’s Emancipation Proclamation. Texas had not returned to the Union by January 1, 1863, when it was first announced. [picture book, ages 5 and up]

This is also a story about cotton which was first grown in Texas by Spanish missionaries.

At the onset of the Civil War, it was the policy of the newly-created Confederate States of America to withhold cotton from European markets in the hopes of inducing either foreign intervention or, at the very least, encouraging recognition of the fledgling Confederacy. It was believed that cotton was “king” and that foreign markets required the South’s most valuable staple crop in order to support European economies. As a result, Confederate President Jefferson Davis and his cabinet adopted a policy that came to be known as King Cotton Diplomacy. This policy hinged on the farce that early in the war the Union blockade denied Confederate shipment of cotton to Europe and aimed at provoking European (most notably the British) intervention. from Texas State Historical Association

… many white people believed that they were better than black people. They believed that blacks were not equal so slaves did not deserve to be free.

The slaves were free, but black Americans would struggle for equal rights for a long time.

This chapter book does a great job linking the American history of enslavement with the Civil War and Juneteenth holiday. It should be required reading in elementary school as a helpful lens for children to view racism in America. [early chapter book, ages 6 and up]

The Story of Juneteenth: An Interactive History Adventure (You Choose: History) by Steven Otfinoksi

… in some towns and cities, white authorities wouldn’t allow African-Americans to celebrate on public lands. So they moved the festivals to more rural areas and black church grounds. In time, freed blacks were able to buy land and donate it for Juneteeth celebrations.

By the beginning of the 1900s, Juneteenth celebrations had largely disappeared. The early history of emancipation was fading for many younger African-Americans, who wanted to forget about the days of slavery.

This is a choose your own adventure set during the precarious days of newly emancipated African-Americans. What will you do now that you are free? There are different scenarios presented based on fictional figures.

“Many southern whites resented the newly freed people. They were afraid the former slaves would take their jobs. Whites created laws called “Black Codes” to restrict their progress. Racist groups like the Ku Klux Klan formed in 1866, terrorized and murdered many black people.”

Against this backdrop, we can begin to understand the underpinnings of Black Lives Matter, police violence against black people, and the new voter restriction laws happening currently, Juneteenth is a holiday that should be in U.S. history books and celebrated in towns across America as it helps us understand the foundation of our country and the rifts that remain. [middle grade, ages 8 and up]

The Story Behind Juneteenth (Holiday Histories) by Jack Reader

I do love historical fiction as a way to visualize what life was like but I wish that someone would tell this same story from Sis Goose’s point of view as this story is from a white perspective. I guess that is not surprising given this book was published in 2007 but this is a prime example of Whiteness in children’s book publishing that a story about a Black holiday is centered around a white family whose guilt is assuaged in a neatly tied-with-a-bow ending. I would love for #OwnVoices to tackle this same subject.

Luli is a young girl whose family owns a cotton plantation in Texas. Sis Goose, who was born a slave, is like a sister to her. Luli’s family is keeping a secret from Sis Goose, and when she finds out that emancipation happened two years prior, she runs away. Her situation is complicated and ends tragically. Luli and her family are burdened with guilt but are given second chances to honor Sis Goose’s memory.  [middle grade, ages 10 and up]

From Lee and Low’s Juneteenth Webinar: 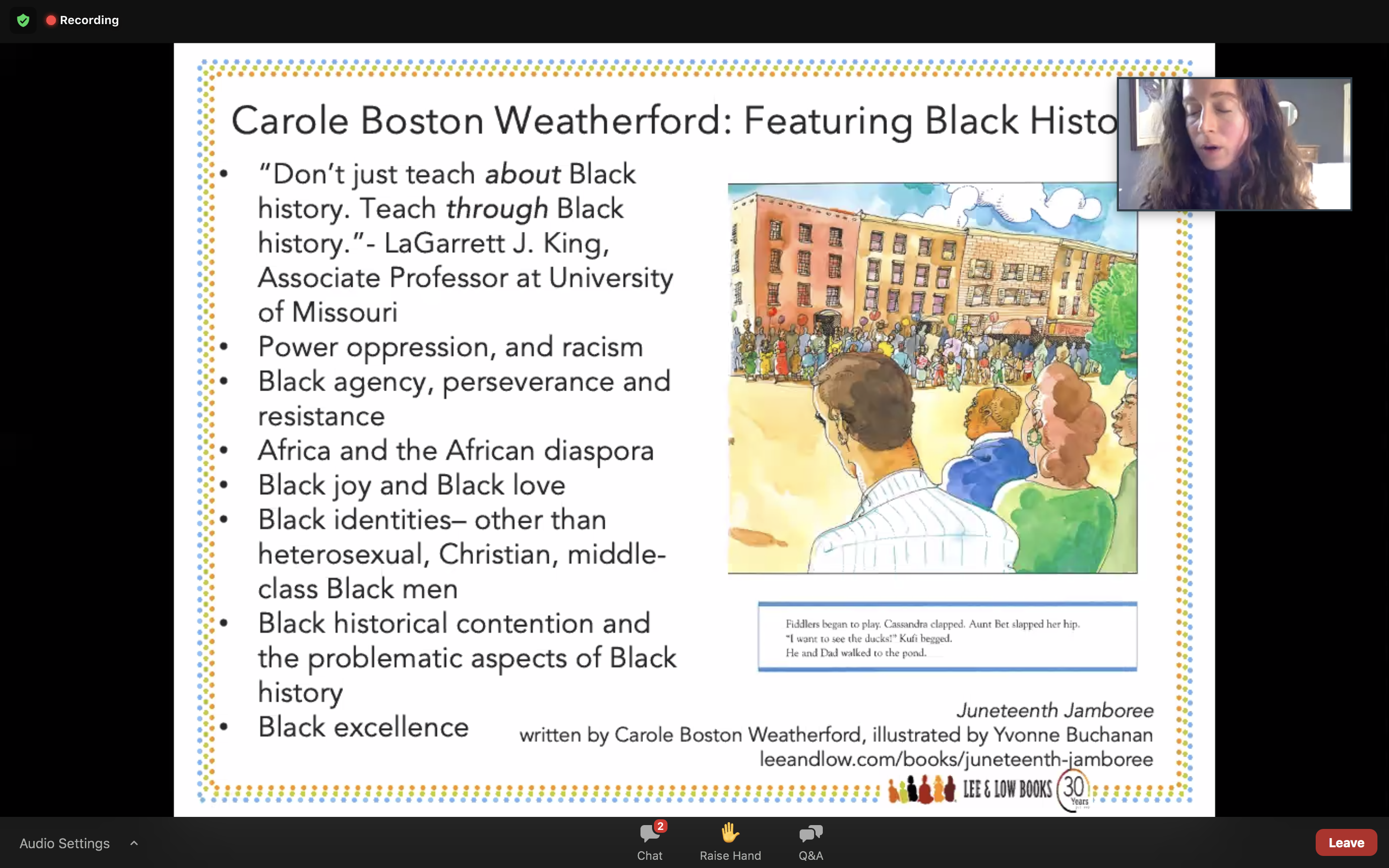 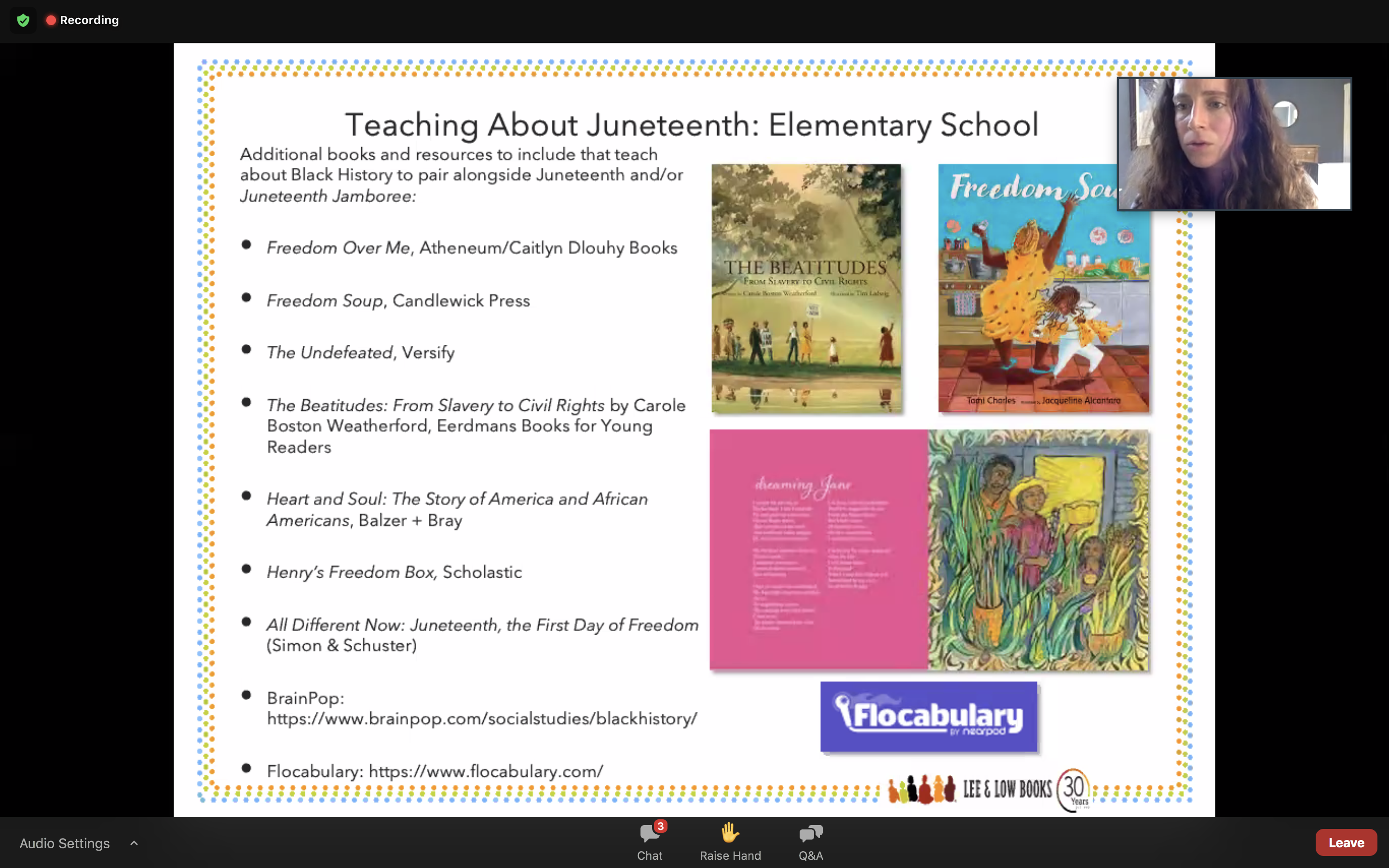 This Little Light of Mine: 5 African Americans Who Excelled in the Arts