This is from New York Magazine: 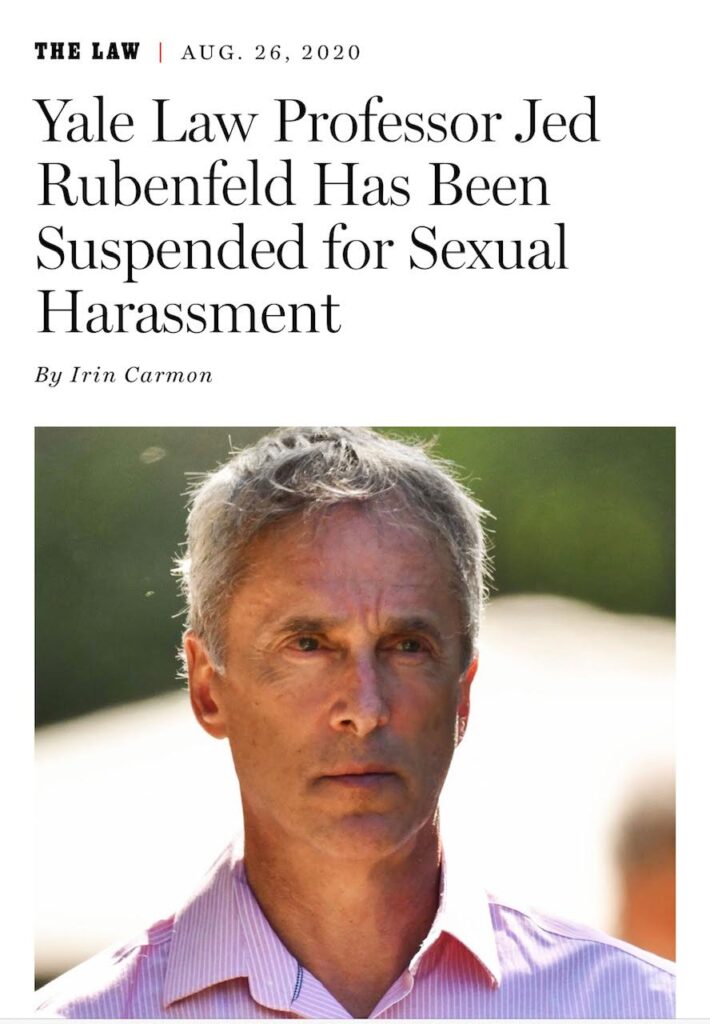 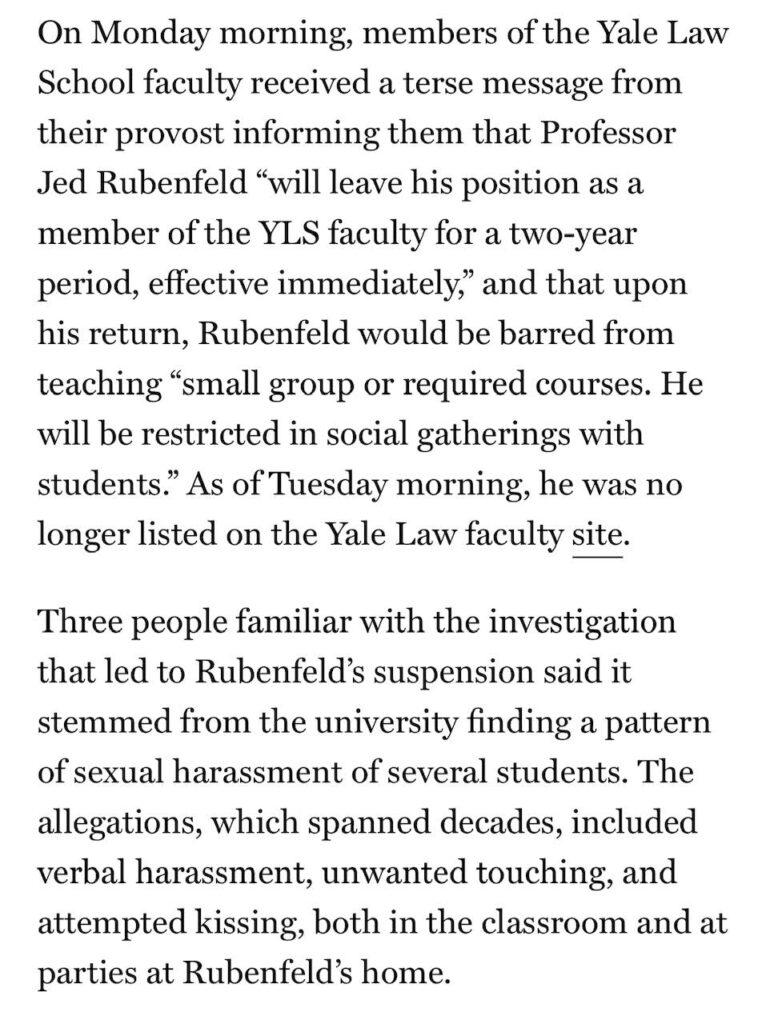 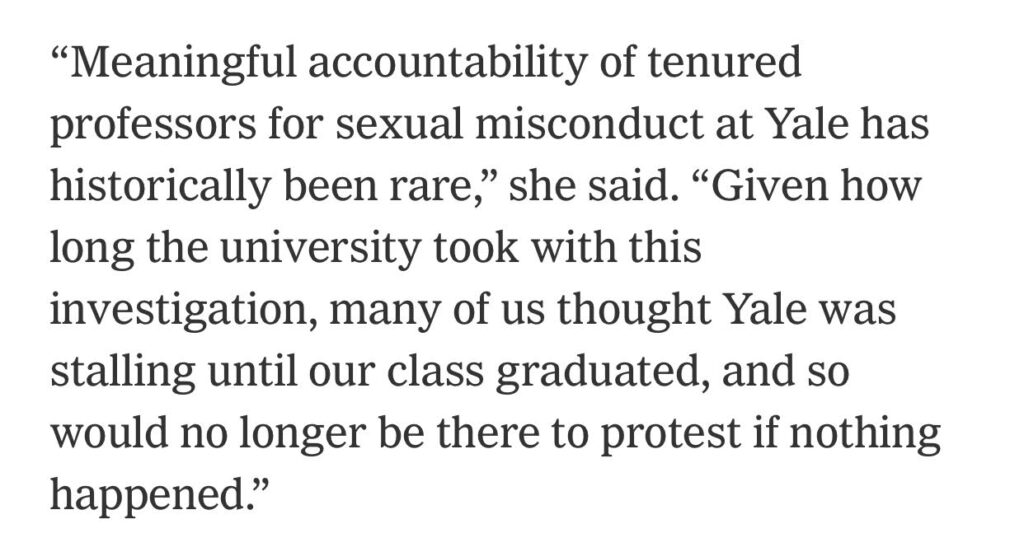 A two year suspension, however, was not was the victims sought according to the Yale Daily News, Law Students demand Rubenfeld’s permanent removal, greater transparency: 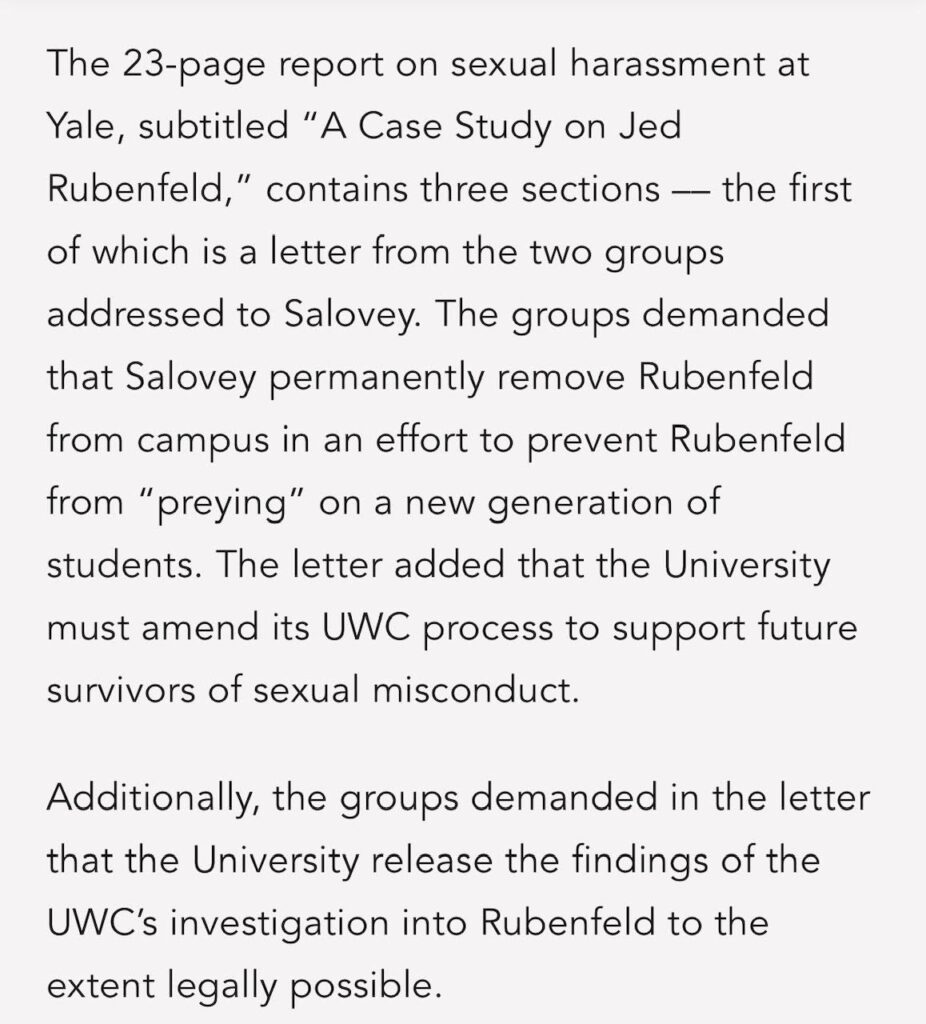 According to The Guardian: Prominent Yale law professor suspended after sexual harassment inquiry: 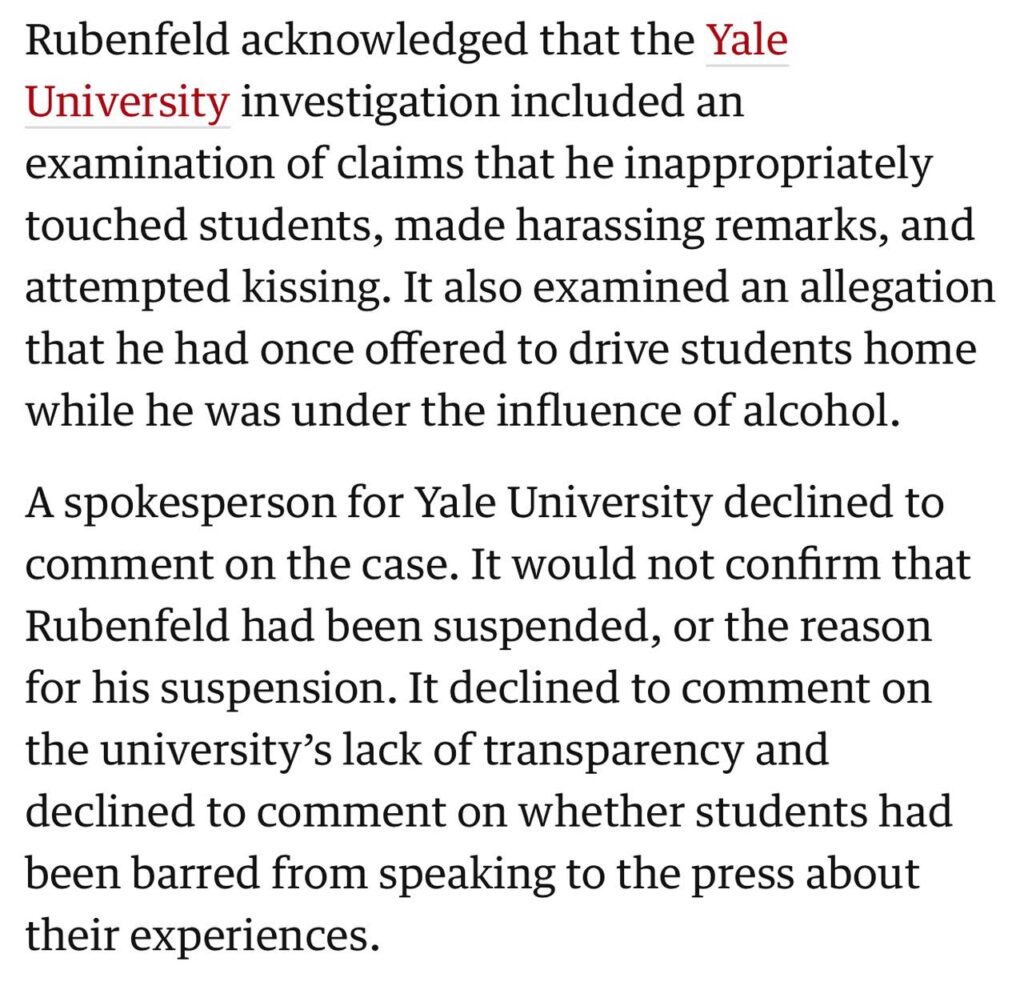 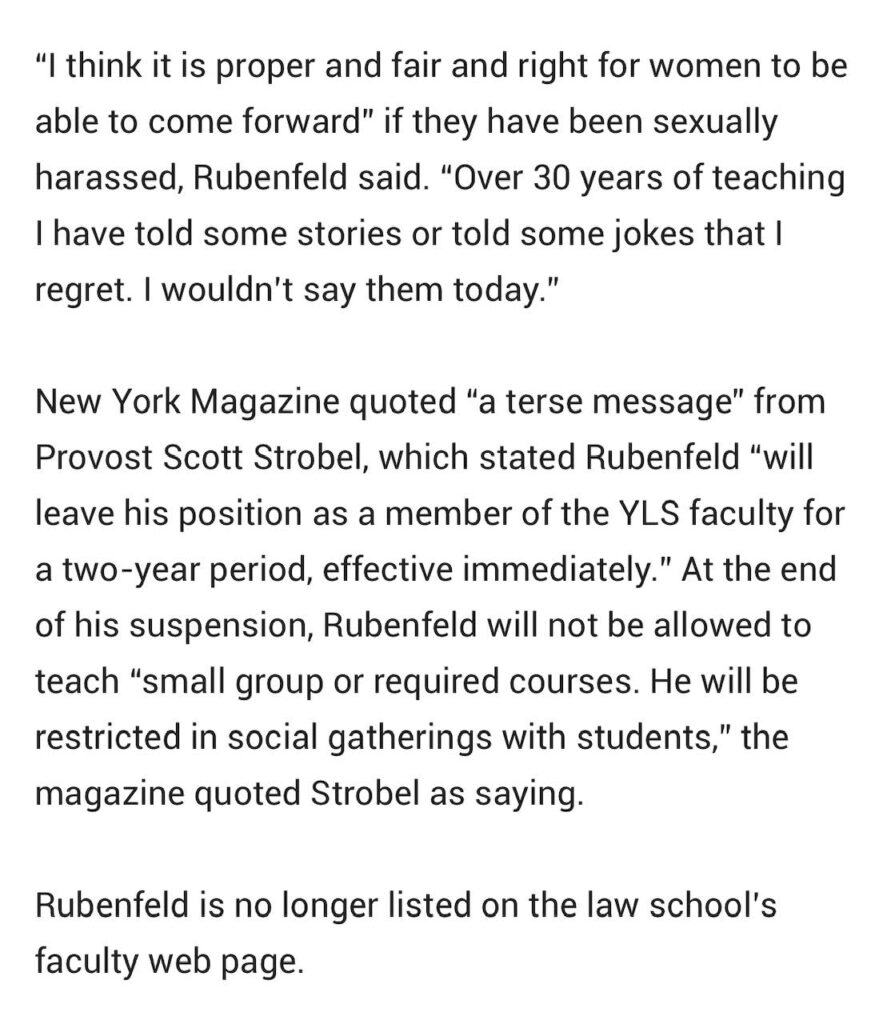 What’s interesting to me is how difficult it is for Higher Education to discipline professors. Yale Law School’s investigation resulted in only a two-year suspension. It begs the question of what is required for outright dismissal?

In the children’s book publishing industry, something similar seems to have happened. Matt de la Pena has been accused of sexual misconduct while teaching creative writing at a New England college. Some of these allegations surfaced on the now scrubbed School Library Journal article. I have the comments on my post on Sexual Misconduct in Children’s Book Publishing and also here below.

Accusation 1: “I wonder if any of Matt de la Pena’s students have weighed in. A friend took a writing class with him and recounted several tales of transactional sexual relationships with his students and creepy behavior.”

Accusation 2: “I didn’t respond to Anne’s survey but Matt de la Pena is someone to steer clear of.”

Accusation 3: “Matt de la Peña. You are powerful and respected in this industry, you should be ashamed of the way you speak to and treat female students. Your business is how we write, not how we look. Among several inappropriate comments, you minimized me down to my appearance in a moment of my education that I worked hard for, that should have been one of my proudest. You made me feel small and objectified. I resent it. I am not shocked to see that I am not the only student you abused your power over.”

Matt de la Pena, hasn’t had time to offer an apology in between all of his speaking engagements, but he somehow found time to change his bio. He no longer considers himself a “love doctor.”

Rehabilitating Jeb Rubenfeld’s reputation is laid out by PR firm O’Dywer’s, How Jed Rubenfeld Could Restore His Reputation: 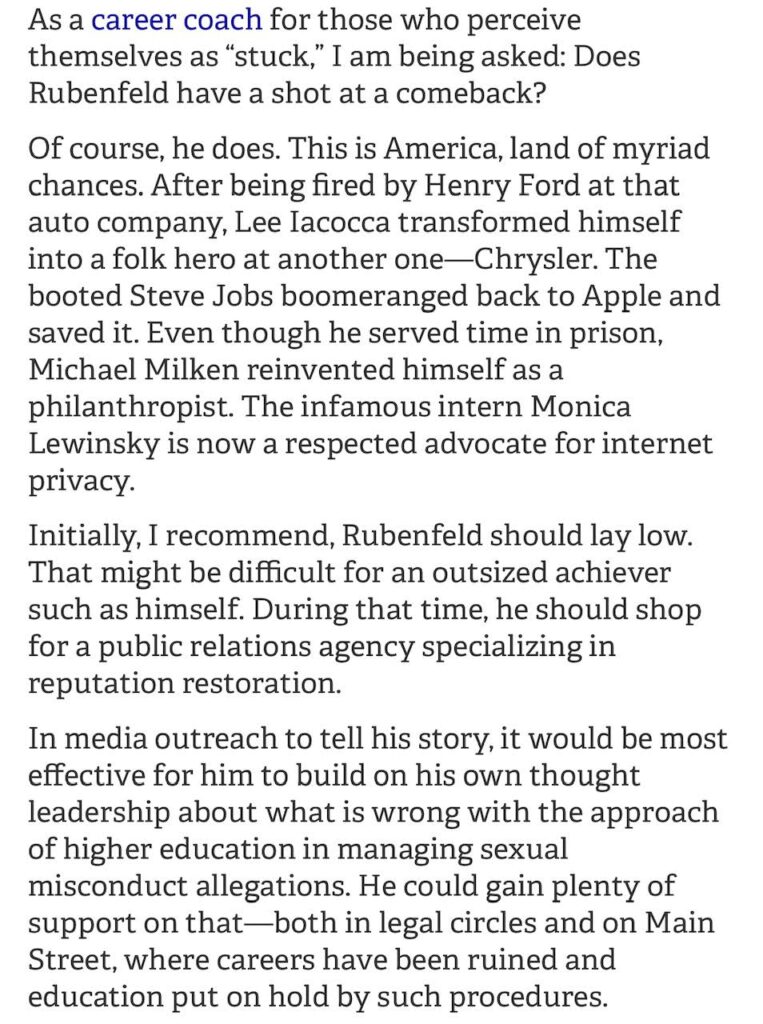 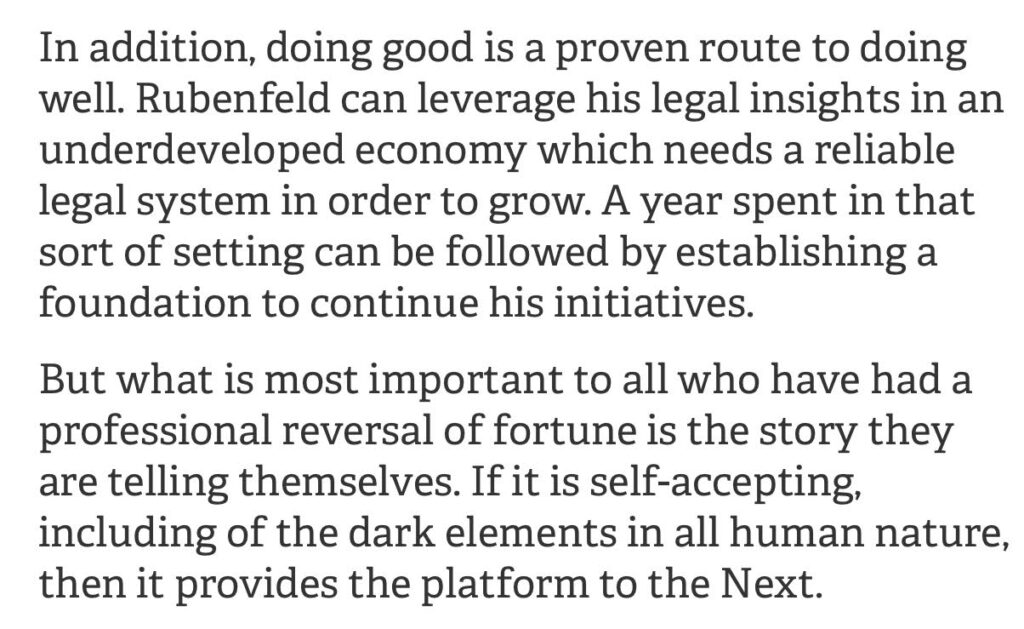 Matt de la Pena and How To Restore His Reputation

Scbwi provided the non-profit platform for Matt de la Pena to make his comeback. A donation, perhaps, was the first step: 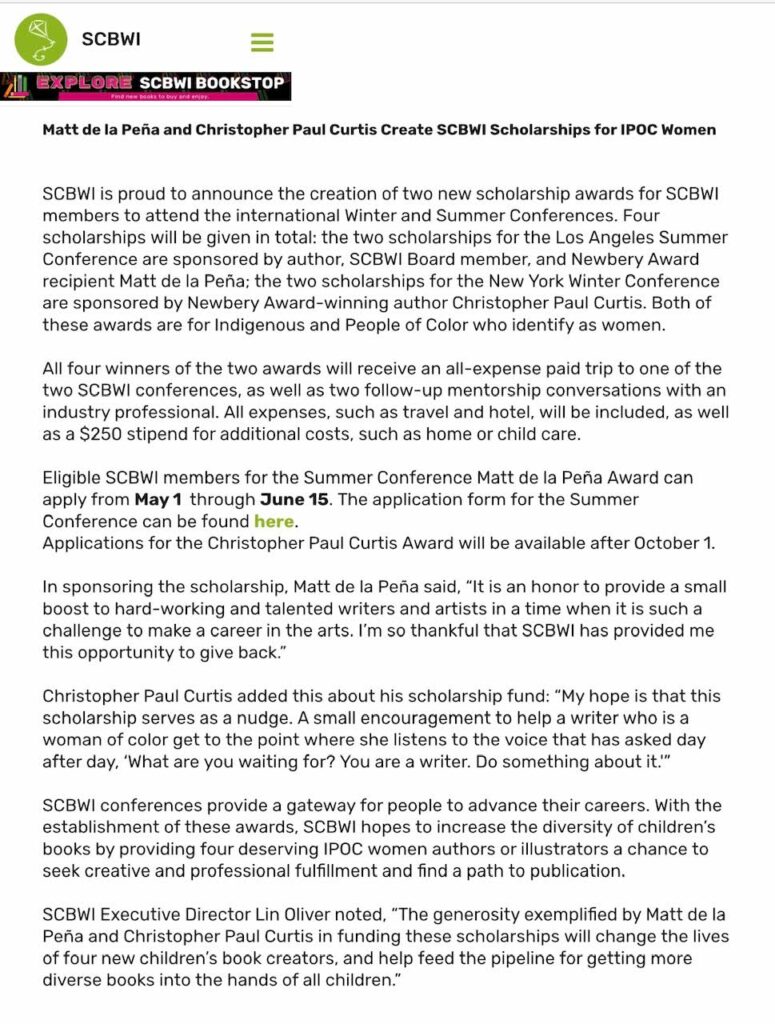 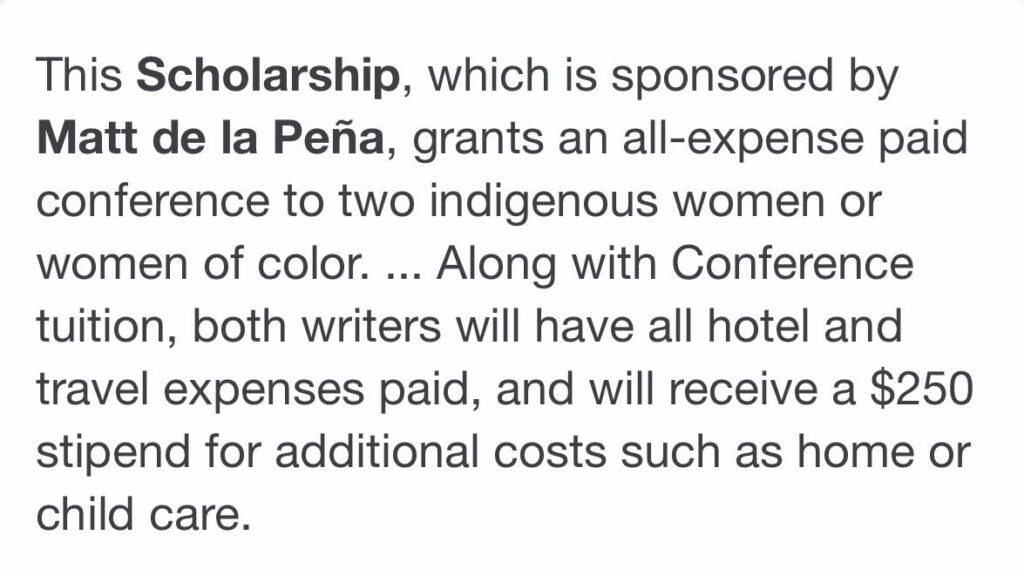 ’13 Reasons Why’ Author Expelled From Writer Organization Over Harassment

Asher Says He Left SCBWI On His Own, and Feels “Harassed” Himself

Collateral Damage of Men Behaving Badly Hits One of Ours

It was just announced in School Library Journal  that her upcoming book Mario and a Hole in the Sky: How a Chemist Saved Our Planet. to be published in April, will be pulped and re-illustrated.  Why? Because it was illustrated by David Díaz,  who was accused in 2017 by illustrator Ishta Mercurio of making an unwanted advance on her at a Society of Childrens’s Book Writers and Illustrators (SCBWI) conference where Díaz was on the Board of Directors.  The incident occurred  back in 2012 but, as a young,  unpublished illustrator she wasn’t about to make waves. There were, however, contemporaneous witnesses to the affront.

However, in 2012,  SCBWI had received an anonymous complaint against Díaz, which   “corresponded with what the organization’s leadership had observed of Díaz’s behavior at conferences, which they considered unprofessional. At that point, they removed him from the board for a year”… and Díaz received some therapy. He was later readmitted to the board and served another year without incident.  But when Mercurio’s complaint was published in 2017, Díaz and Oliver agreed he should step down permanently.

I personally think that Lin Oliver has a finger to the wind in determining Scbwi’s reaction to sexual misconduct claims. As long as they don’t hit the front page news, thus impacting the bottom line, she’s going to continue to support those creators credibly accused, giving them second chances.

The pandemic has affected Scbwi financially as well. The draw of their events is the change to rub shoulders with agents, editors, and well-known authors and illustrators. Removing the in-person factor reduces income. Online events are here for the near term and Scbwi has switched to that model but I’m sure attendance is down. It will take a star-studded lineup to get their conferences sold out again. Matt de la Pena fits the ticket and adds diversity to the mix as well. Not to mention that he’s also a benefactor to the organization, funding scholarships and making, perhaps, other financial donations.

Scbwi is a nonprofit that promotes hopes and dreams, but never forget that it’s in the business of making these dreams happen. And that takes membership renewals and attendee ticket sales. With a 2:1 majority of female members, Scbwi knows how to work that angle. Put men front and center on the stage. It’s an outdated strategy that suggests a change in leadership is in order. But this is an organization where only the bottom line demands accountability. Everything else is just PR.