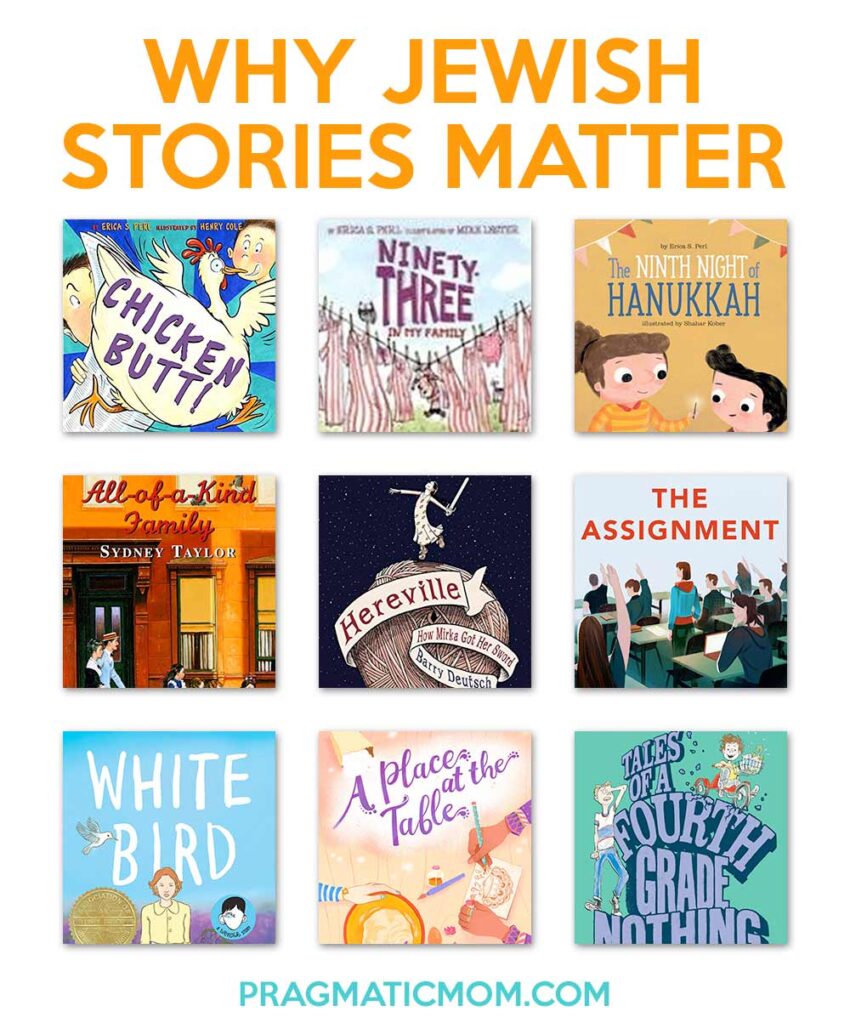 Please welcome my guest author today, Erica S. Perl, with  Why Jewish Stories Matter. I met Erica years ago when she visited Wellesley Books for her picture book, Chicken Butt. My dear friend Lynn Melville had the most interesting neighbors and Erica S. Perl was one of her Cambridge neighbors back in days before she had kids. Lynn’s youngest son, Sam, was my son’s best friend during his preschool years (and they are still friends though they are in different grades).

We brought them to Erica’s hilarious Chicken Butt book event and we sang songs with Erica leading the way with a chicken hat. There were chicken cookies too, as I recall. It was a warm hug of a day and it was, I believe, the first time the boys met authors at book events. Sam still loves 93 in My Family. I read it so often to my son that I still have parts of this rhyming story memorized.

As the years passed, I noticed that Erica branched into middle grade and I found all her books to be excellent! I’m thrilled to welcome Erica today in celebration of every night of Hanukkah, but especially the ninth night!

The Ninth Night of Hanukkah by Erica S. Perl, illustrated by Shahar Kober

It’s Hanukkah, and Max and Rachel are excited to light the menorah in their family’s new apartment. But, unfortunately, their Hanukkah box is missing. So now they have no menorah, candles, dreidels, or, well, anything! Luckily, their neighbors are happy to help, offering thoughtful and often humorous stand-in items each night. And then, just as Hanukkah is about to end, Max and Rachel, inspired by the shamash (“helper”) candle, have a brilliant idea: they’re going to celebrate the Ninth Night of Hanukkah as a way to say thanks to everyone who’s helped them! Activities including pennants, thank you cards, a cultural guide, and a special blessing are here. [picture book, ages 4 and up] 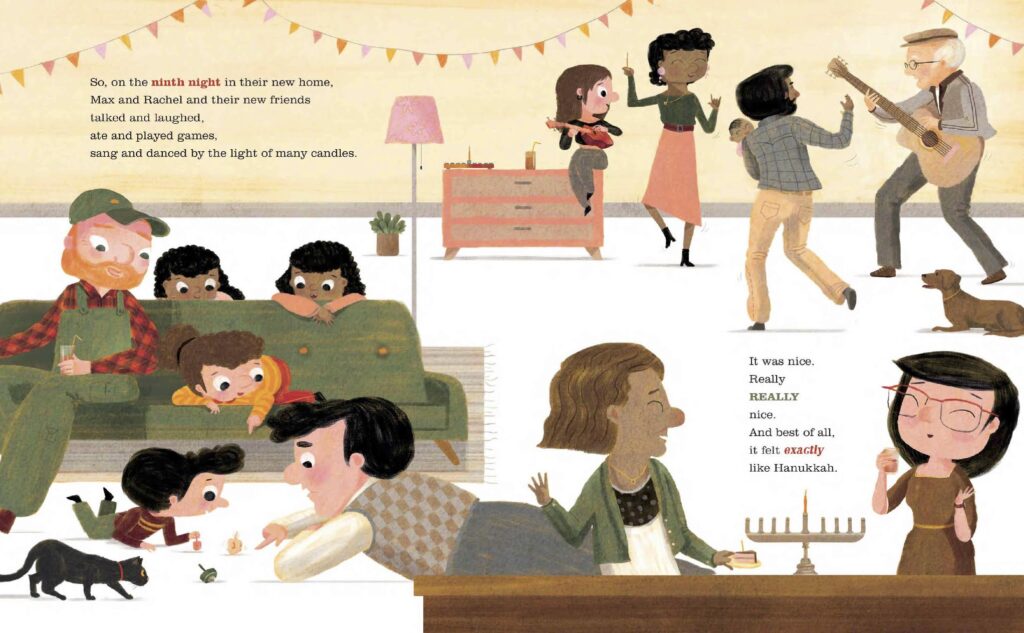 While we still have a long way to go, I am thrilled to see how many excellent, diverse stories are making their way into the world. All kinds of stories – stories that shine light on underrepresented cultures and experiences, stories that feature heroes (and sheroes!) we haven’t seen before, and stories that aren’t “about” identity, but are populated with refreshingly diverse casts of characters. I say bring it on so that we can all have diverse bookshelves! And make sure to include Jewish stories.

Why Jewish stories? Well, there are lots of reasons. Allow me to list a few:

1) So Jewish kids can see themselves represented. We’re a religious minority, after all – according to the Pew Research Foundation, only 1.9% of Americans identify as Jewish. I know from experience what it’s like to not see yourself in books. I didn’t encounter Jewish book characters until I read Sydney Taylor’s All of a Kind Family books several years later. Even then, books about Jewish kids were hard to come by. Even harder if you were looking for characters who didn’t live in an Eastern European shtetl or on New York City’s Lower East Side. Judy Blume’s Sheila Tubman (first seen in Tales of a Fourth Grade Nothing, and later the star of Otherwise Known as Sheila the Great) was the first character I met who really felt like me to me.

2) So all kids can see the diversity that exists within the Jewish faith. It’s easy for people with limited personal experience to assume that all members of a minority group are alike. But within the Jewish faith, there’s a huge range of differences in terms of how we worship, how we live, where we live, what language(s) we speak, and what religious and cultural traditions we preserve, question, or reject. We don’t all keep kosher, for example. Some Jews cover our heads, others do not. The list goes on and on. Barry Deutsch’s Hereville graphic novel series does an excellent job of profiling (to quote the book’s wry-yet accurate tagline) “yet another Troll-fighting 11-year-old Orthodox Jewish girl” – yes, please! There are also many wonderful books about kids whose identity includes Jewish and non-Jewish heritage. I’ve listed some picture book options here. I also recommend Madelyn Rosenberg and Wendy Wan-Long Shang’s middle grade novels Not Your All-American Girl and This is Just a Test.

3) So we never forget. As Jews, the Holocaust lives within us. We make it a priority to honor all that was lost by never forgetting what happened in Nazi Germany. There are many excellent books that translate this experience for children and teens (Liza Wiemer’s recent YA novel, The Assignment tackles the ways the Holocaust can be taught in high school; and, for younger readers, R.J. Palacio’s White Bird, a graphic novel, won the Sydney Taylor Book Award last year). While some might make the argument that there are “too many” Holocaust books – it sometimes feels like they outnumber all other Jewish books by a huge margin – it’s important to remember how few living Holocaust survivors remain, and that acts of antisemitism are unfortunately on the rise.

4) So Jewish people will be understood and appreciated as part of the fabric of a diverse society. When I was a kid, I often felt very “other.” My hair was too dark and too frizzy, my family ate weird foods (oily smoked fish, sweet noodle “pudding,” and tongue sandwiches, anyone?) and I desperately wanted to fit in. Today’s kids, thankfully, seem to have a greater understanding that what makes each of our families different makes us special. So, when I wrote The Ninth Night of Hanukkah, I filled it with neighbors of all ethnicities – including the Jewish family at the book’s center. The book closes with an image of all of the neighbors celebrating together, which is what I want to show the world. Jewish people deserve to have a place at the table (speaking of which, try Saadia Faruqi and Lauran Shovan’s A Place at the Table!) as well as on the bookshelf, along with everyone else. 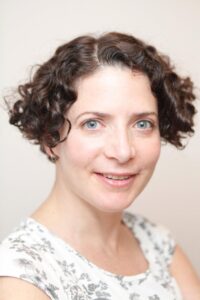 2 thoughts on “Why Jewish Stories Matter”