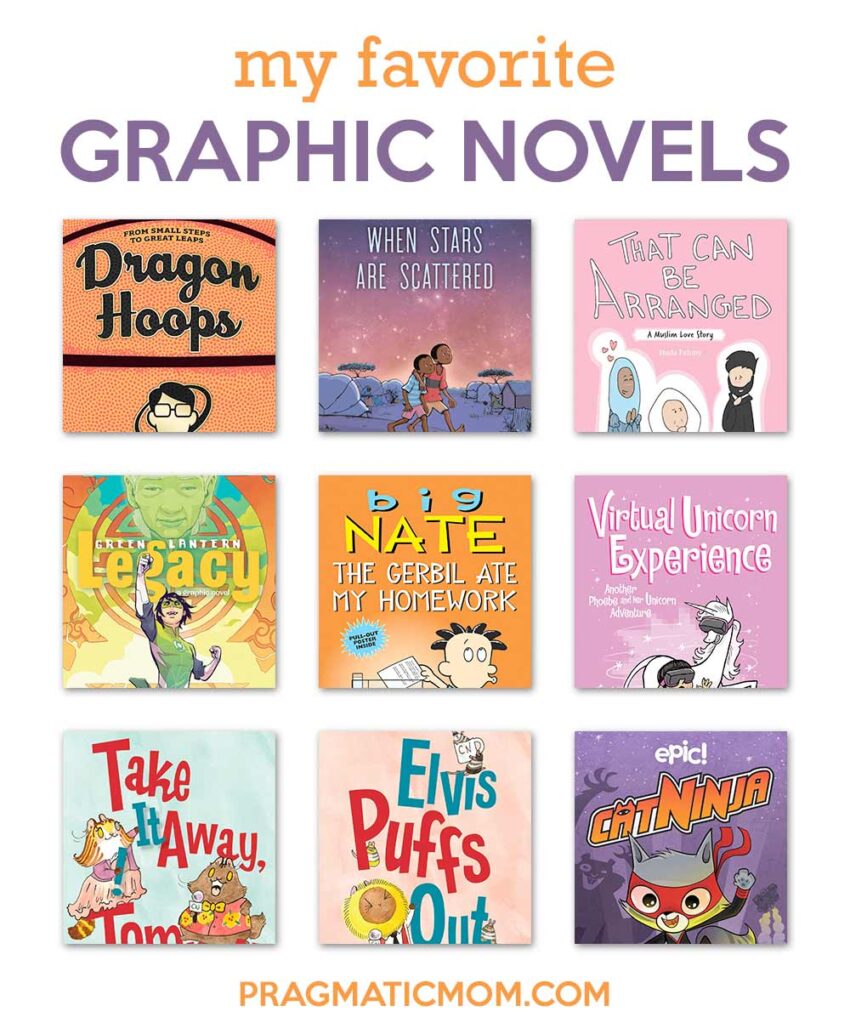 My son has always loved graphic novels since he learned to read independently. In fact, I credit graphic novels for motivating him to read. Captain Underpants, Big Nate, Percy Jackson, dinosaur book, and National Geographic nonfiction were all milestone markers that got him reluctantly off screens and peering into a book.

I still search for books to tempt my son into reading for pleasure. He’s discovered the humor of David Sedaris. I’ve given him a few of the books on this list including Dragon Hoops and Green Lantern: Legacy for him to evaluate for me. I’m happy that graphic novels still keep him reading!

What graphic novels would you add to this list? I just ordered Flamer by Mike Curato from Boookshop.org to add to this list. I’ll keep adding if you give me suggestions. Thanks!

My Favorite Graphic Novels from 2020

*This is my number one pick for my son who loves basketball and the Celtics!

In real life, Gene Luen Yang was a math teacher at a Catholic high school when he wrote this graphic novel. Basketball wasn’t a sport that he knew much about, but his high school’s quest to win the California State Championship drew him in as the prize was just out of reach. Yang gets personal here, with drama unfolding not just within the team and the players, but also his own career choices and that of the head coach, accused of sexual misconduct. Basketball fans will appreciate a top team’s quest for the championship but those who don’t enjoy watching hoops will find that sports reveal insights into the big issues of this last decade: the #metoo movement, diversity, and making choices in an uncertain environment. [young adult, ages 12 and up]

When The Stars Are Scattered by Victoria Jamieson and Omar Mohamed

Omar Mohamed and Victoria Jamieson have penned an unflinching memoir about what life is like for two young boys in a refugee camp in Kenya. Their father was killed in front of them in Somalia and they don’t know what happened to their mother. It was a small miracle that they made it to this refugee camp without perishing. Here, there are chronic food shortages, limited access to education, and danger from wandering too far from their section of camp. But there is also love and community. Omar and Hassan have Fatuma, a legal guardian who treats them like her own sons. Omar wants to help his younger brother Hassan, who is nonverbal, and education is his only means out. When hope is in short supply, Omar finds that there is a way home after all. [graphic novel, ages 9 and up]

*Pair this with Brothers in Hope and A Long Walk to Water.

8th grade is beginning at Riverdale Academy Day School and it’s another adjustment for friends Jordan, Liam, and Drew. Their school is working to address diversity and inclusion issues but this seems to alienate Drew more. Why does he feel like a stereotype here of an inner-city black kid? He enjoys football but he’s hesitant to try out for basketball because isn’t even more of a cliche? Income disparity is also hard to hide at this pricey private school. Drew finds it uncomfortable to be around Liam after spending time at his huge house. Being comfortable with yourself has never been an easy task for a middle school student, but can Drew find a way to find commonality with his friends, both at school and in his neighborhood, or will he forever feel like the odd man out? [graphic novel, ages 8 and up]

That Can Be Arranged: A Muslim Love Story by Huda Fahmy

I’m obsessed with the Netflix show, Indian Matchmaking, so this was a natural fit for me and Huday Fahmy does not disappoint! I didn’t realize that women are expected to get married by the age of 21 in Islam culture or they are considered past their prime. In Japan, girls past the age of 25 are considered “Christmas Cake” (and I thought that was young to be considered past their prime for marriage). This is a charming graphic novel of Huda’s love-at-first-sight story. Arranged marriages, like in Asian cultures, are not forced marriages. They are more like a personal dating app. I hope Huda continues her graphic novel about being a newlywed because now I am fully invested in her relationship.

I think this is a perfect read to learn more about the Muslim religion. It has the perfect balance of humor and tension. The large font and limited text on the page also make this appealing to reluctant readers. [graphic novel, ages 8 and up]

My son has always loved DC and Marvel Comics superheroes, specifically The Flash and Green Lantern. I thought this was a no brainer to get him reading. But he’s not a fan of “diversifying” superheroes where they suddenly get a new ethnic identity, in this case Vietnamese. I think with the success of Miles Morales as Spiderman, it’s a money grab to recast superheroes into BIPOCs. My son would prefer that DC and Marvel create BIPOC superheroes, rather than pretend that an alternate universe exists where they are suddenly completely different. Still, I personally enjoyed this retake of Green Lantern as the grandson of a Vietnamese Superhero. [middle grade, ages 8 and up]

Big Nate: The Gerbil Ate My Homework by Lincoln Peirce

Lincoln Peirce has this talent of expressing how kids feel and what they think through Big Nate who is a kind of everyman. His graphic novel series also has a wide age appeal. My son started reading Big Nate in 3rd grade and still enjoys these books in high school. There is just something comforting and appealing about a Big Nate book; it’s like a cozy blanket to cuddle up in. A case in point: my daughter is babysitting a 3rd grade girl and she will only read Big Nate books exclusively. (I made this list for her.) [graphic novel, ages 8 and up]

Big Nate: Blow the Roof Off! by Lincoln Peirce

The theme of this Big Nate book is his new girlfriend who is one grade older. While the age difference presents challenges, Big Nate and his friends help him to weather this newest dilemma. And that’s what is great about the Big Nate books. He has a solid group of friends who do things together, even if they are not the best at it such as their band. Other characters such as Chad provide ballast for another theme of these books, kindness and being a decent person. I think the wide appeal of Big Nate is that while he’s the Everyman, he’s also just a nice kid going through middle school which can be fraught with social drama and friendship issues. [graphic novel, ages 8 and up]

Virtual Unicorn Experience: Another Phoebe and Her Unicorn Adventure by Dana Simpson

This Phoebe and Her Unicorn adventure centers around the performing arts. Her unicorn has auditioned for a part in a play and doesn’t handle rejection very well. Phoebe questions if her piano lessons should end when she accomplishes a certain level of proficiency. Throughout the book, Phoebe and her unicorn banter, allowing her to express all her thoughts and anxieties to a semi-judgemental audience. Phoebe also branches out into human friendships, finding commonalities with her frienemy through a TV series. Phoebe is growing up and we are here for it! [graphic novel, ages 8 and up]

Take It Away, Tommy!: A Breaking Cats Adventure by Georgia Dunn

At first, I found this graphic novel series puzzling. The art isn’t the crisp line art like most graphic novels. I didn’t understand the premise of the books. Who exactly was the narrator? And then, I got it. The cats are roving reporters who dispense the news of their human household. And, just like that, I was charmed. In this book, there are also ghosts in the house — a cat ghost and a lady. The cat reporters figure out the breaking news story that involves a charity to help stray cats. There is also drama with the mice in the house that ends with a message about getting along. [graphic novel, ages 9 and up]

Elvis Puffs Out: A Breaking Cats Adventure by Georgia Dunn

In this latest edition, a stray kitten is rescued by the humans and integrated into the breaking cat news reporters. The kitten, now named Beatrix, makes an impact on the news crew right away. There’s a happy ending for her as well as she finds a new home. There are other newsworthy stories the cats break as well. An “Owl and Pussycat” love story gone awry with a mouse in need of a rescue. Readers may also be amused by human life as observed by their pet cats. Combining fanciful adventure with a unique cats’ perspective, this graphic novel series is as cozy as warm pajamas and fuzzy socks. [graphic novel, ages 9 and up]

I really loved Dan Santat’s graphic novel Sidekicks which also features pets who save the world. CatNinja is Sidekicks + The Incredibles. It’s pets as ninja superheroes with a little tech thrown in. Yehudi Mercado illustrates this epic adventure with a mood of dark and manic energy. [graphic novel, ages 7 and up]

Sounds All Around: A Guide to Onomatopoeias Around the World by Dr. James Chapman

This book began as a webcomic series, Soundimals, that author (and illustrator), Dr. James Chapman, began in 2013. In the webcomic, Chapman explored the sounds that animals make around the world. This graphic novel includes animal sounds and expands the onomatopoeia words to noises that humans and the natural world make as well. Use this graphic novel as a fun way to explore multiculturalism — there is great diversity in the way humans describe the world around us, but there is also so many similarities! [graphic novel, ages 9 and up]