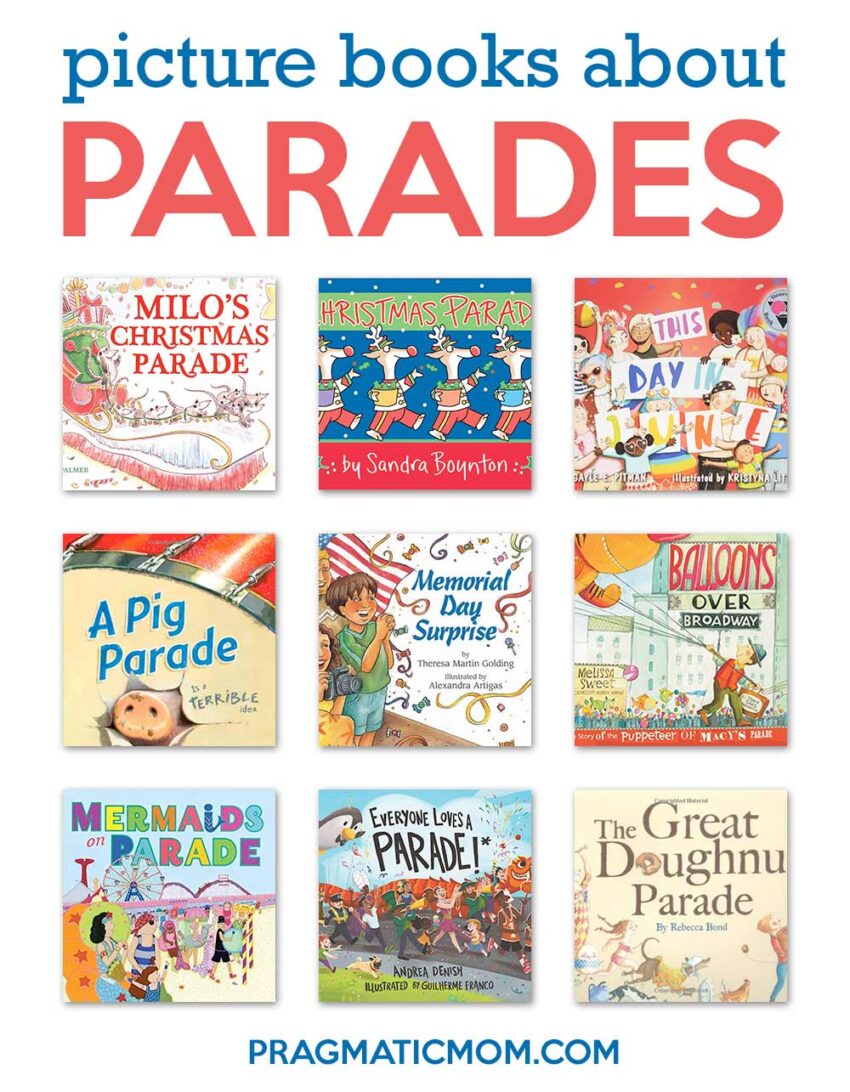 Please welcome my guest author today, Jennie Palmer. You might remember her when she was here with her pizza book list. Her newest picture book, Milo’s Christmas Parade, harkens back to her days working on the Macy’s Thanksgiving Parade. How many people can say that?!

We are giving away three copies of Milo’s Christmas Parade. To enter, please fill out the Rafflecopter at the bottom.

My latest picture book, Milo’s Christmas Parade, was inspired by the years I worked as a designer and sculptor for the crew that builds floats and balloons for the Macy’s Thanksgiving Day Parade.

In my story, Milo and his family watch their local Christmas parade every year. Well, Milo is the only one who’s really watching. The other opossums are only interested in snacking on dropped bits of popcorn and peppermint sticks. But Milo is riveted by the colorful costumes, giant balloons, and fantastic parade floats trimmed with fringe. It’s his dream to one day join the Christmas parade. And this year, with a plan, hard work, and the unwavering support of his passel, Milo is determined to make his dream come true. [picture book, ages 4 and up]

Parades celebrate events, cultures, and communities, big and small, all over the world. Each parade has its own distinct traditions and elements, but all are joyous events kids love.

This year, the Macy’s Thanksgiving Day Parade, like so many other events, will be re-imagined to ensure everyone’s safety during COVID. So, while parades everywhere may have been put on hold temporarily, I hope these 9 stories can hold the space until we can all be together to celebrate again.

This Sandra Boynton classic features her beloved characters marching along to a catchy, non-religious, Christmas rhyme. This holiday parade story’s emphasis is on identifying animals and instruments. [picture book, ages 3 and up]

This Day In June by Gayle E Pitman, Illustrated by Kristyna Litten

A celebration of the LGBTQ community, this sparsely-worded, rhyming picture book features pride parade images that are joyous and detailed. A beautiful celebration of unity and inclusion. The back matter offers context for each page as well as a discussion guide. [picture book, ages 4 and up]

A Pig Parade is a Terrible Idea by Michael Ian Black, illustrated by Kevin Hawkes

What happens if you mix pigs with classic parade elements? Nothing good. If your child is old enough to know what a parade is, this book is hysterical. Not only a great read-aloud but super useful for teaching elementary persuasive writing. [picture book, ages 4 and up]

Balloons Over Broadway by Melissa Sweet

A personal favorite of mine, this book tells the story of Tony Sarg, puppeteer and the first creative director of the Macy’s Thanksgiving Day Parade. Melissa Sweet’s collage-style matches perfectly with the playful ingenuity Sarg is famous for. A perfect send up for the man who invented The Macy’s Parade’s signature balloons. This is a book to pour over and is sure to inspire young artists. [picture book, ages 4 and up]

I love the Coney Island Mermaid Parade because it celebrates the creativity of its participants. This story follows a little girl’s parade day from preparing her own costume to the end-of-day awards ceremony. Children will love all the colorful costumes and the overhead map of the parade route. A note for parents — the actual mermaid parade is a very body-positive event where partial nudity is not uncommon, so be aware if young readers want to search for more images of the event online. [picture book, ages 3 and up]

Everyone Loves a Parade by Andrea Denish, illustrated by Guilherme Franco

This sweet rhyming book features this country’s most well-known parades. Colorful and bold illustrations of The Rose Bowl, Mardi Gras, Chinese New Year, Thanksgiving Day parades, and more, show why everyone loves a parade! Well, almost everyone. A perfect parade primer for ages 4-7 years. [picture book, ages 4 and up]

A tale about a Boy who marches through town with a doughnut tied to his belt by a string. Billy first attracts a hen, then a cat, then half the town joins to form a joyous parade. Written in rollicking rhyme, this spontaneous parade feels just as monuments as any planned event and is sure to leave little ones hungry for a donut. [picture book, ages 3 and up]

The Day Ray Got Away by Angela Johnson, illustrated by Luke LaMarca

A successful Parade relies on everyone involved playing their parts perfectly. In The Day That Ray Got Away, a veteran parade balloon decides that for him, this parade will be different. Children and adults alike will identify with Ray’s desire for freedom, and cheer the wonderfully unresolved ending. Fun Fact to research with kids: back in the 1920s and ’30s, Macy’s used to release their giant balloons at the end of the parade with a cash reward for whoever captured and returned the balloons to the store! [picture book, ages 5 and up]

We are giving away three copies of Milo’s Christmas Parade. To enter, please fill out the Rafflecopter below. We can only mail to U.S. and AFO addresses. 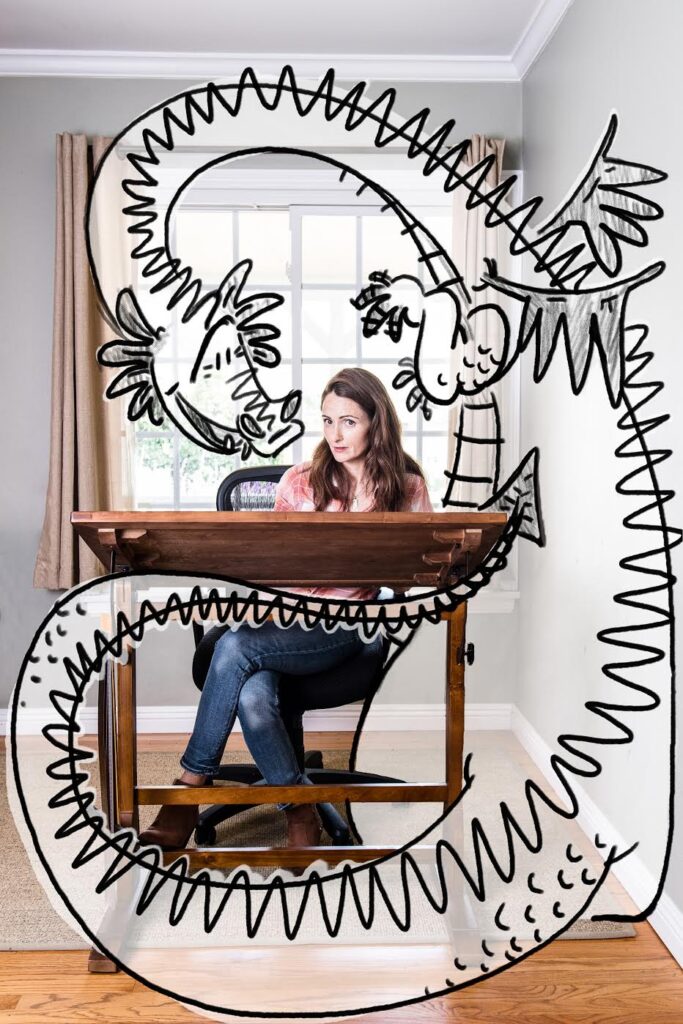 Jennie Palmer is the author-illustrator of The Wompananny Witches Make One Mean Pizza (Abrams). Before making books for children, she worked as a production designer, most notably as a senior designer and sculptor for the Macy’s Thanksgiving Day parade. Jennie is a graduate of RISD where she majored in illustration. Born and raised in the NY area, Jennie now lives in Burbank, CA with her husband and three children. Her second picture book, Milo’s Christmas Parade, will be published by Abrams on Oct. 20, 2020. To learn more, check out her website, Instagram, Facebook, and Twitter!

Picture Books with Birds as Inspiration or Character