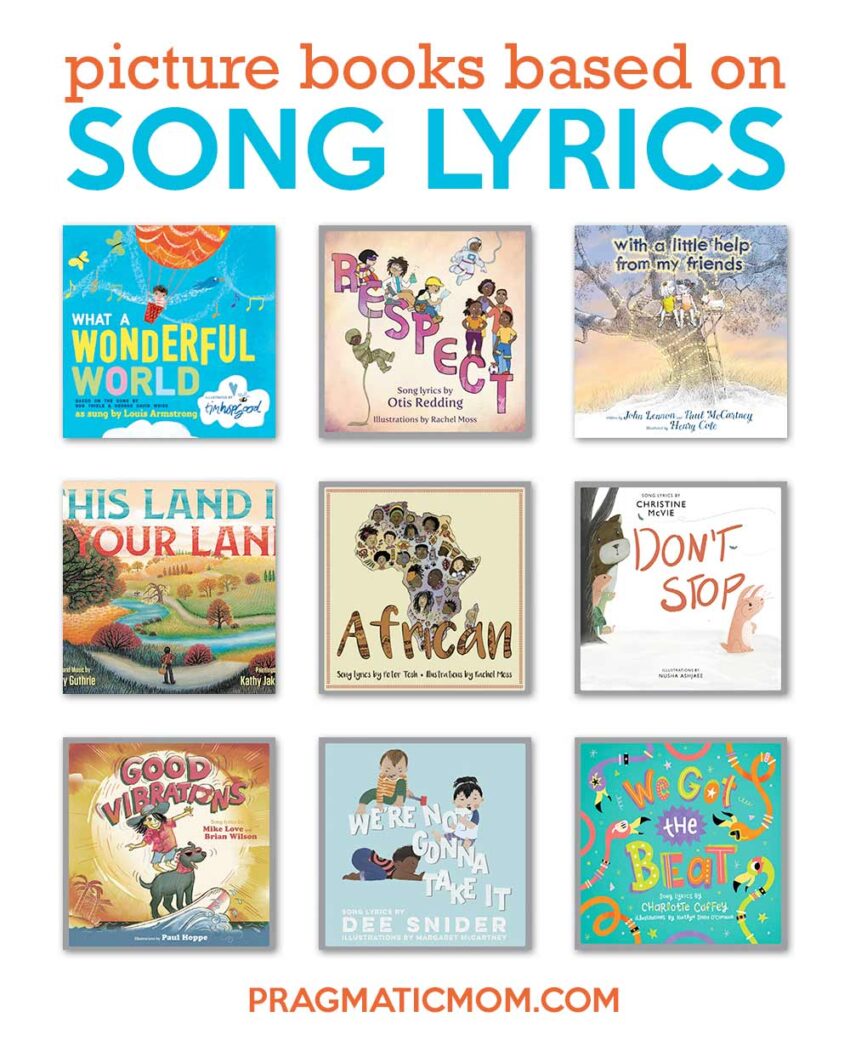 Your favorite songs reimagined as picture books? Yes! Once you start reading these books, it’s hard to get the songs out of your head. What I love about these books that even though the lyrics tell a story, it can often be reinterpreted to circumstances that relate to a young child such as a friend moving away, a mother who works outside the home, and bullying.

What are your favorite songs that you would like to see as a picture book? Thanks for sharing!

What a Wonderful World song lyrics by Louis Armstrong, by Bob Thiele and George David Weis, and illustrated by Tim Hopgood

Louis Armstrong recorded What A Wonderful Life in 1967. The song sold over one million copies. We used the song for our first Multicultural Children’s Book Day video! [picture book, ages 3 and up]

p.s. Sign up to receive a free diverse children’s book through Multicultural Children’s Book Day. You simply post a review of that book to any social media channel during the last week of January.

Otis Redding released the original song Respect in 1965. It became a signature hit for Aretha Franklin in 1967 when she reimagined the song and made a few lyric changes. This picture book combines Otis Redding’s lyrics with Aretha Franklin’s vision of a strong woman deserving respect … it’s an ode to all moms who work, both inside and outside the home! Otis Redding’s version was of a man desperate to keep his woman. [picture book, ages 2 and up]

With a little help from my friends by John Lennon and Paul McCartney, illustrated by Henry Cole

It’s nearly impossible to read this book without hearing the Beatles song in your head! Henry Cole does a brilliant job of taking the lyrics of this famous song and turning it into a story of a friendship between two girls. Their friendship is are able to surmount the difficulty of distance when one of them moves away. [picture book, ages 4 and up]

This Land is Your Land by song lyrics by Bob Dylan, illustrated by Kathy Jakobsen

Woody Guthrie debuted This Land is Your Land in 1940 and it has gone on to become a beloved folk song inspiring patriotism and inclusion. Illustrations to Bob Dylan’s lyrics in the picture book depict a road trip across America, celebrating the beauty of our great nation. [picture book, ages 3 and up]

This picture book is a celebration of children of African descent. The song “African” by Peter Tosh was originally released in 1977 on his second solo record, Equal Rights. Peter Tosh, along with Bob Marley and Bunny Wailer, were members of the Jamaican reggae band, The Wailers [picture book, ages 1 and up]

Christine McVie wrote Don’t Stop for Fleetwood Mac as an anthem to pushing forward. In this picture book, her song is reimagined as a rabbit’s hibernation story waiting for spring. [picture book, ages 1 and up]

The Beach Boys Mike Love and Brian Wilson encapsulated the surf culture of California in the 1960s so it’s appropriate that their song lyrics are reimagined in this picture book as a day at the beach for a little girl and her dog who spread goodwill everywhere they go. [picture book, ages 1 and up]

Twisted Sister probably did not imagine their song as a Terrible Two anthem but it works! Their 1980s hair band’s antiestablishment anthem is reimagined as three diverse toddlers who resist what their parents want them to do. [picture book, ages 1 and up]

We Got the Beat song lyrics by Charlotte Caffey, illustrated by Kaitlyn Shea O’Connor

The 1980s all-girl band, The Go Go’s, is my jam from my college days when New Wave syntho rock graced every party. It’s entirely appropriate then, that this picture book would be in the form of a dance party where children and parents find their groove inside the house and outside in nature. [picture book, ages 1 and up]

These Boots Are Made for Walkin’ song lyrics by Lee Hazlewood, illustrated by Rachel Moss

These Boots Are Made for Walkin’ was an instant hit for Nancy Sinatra who recorded it in 1966. In this picture book, a very jealous cat must adjust to life when a new puppy joins the family. [picture book, ages 1 and up]

American hip hop duo DJ. Eric B. & MC Rakim defined the golden age of rap in the 1980s as the DJ/MC.  Their hit single, Move the Crowd, is reimagined in this picture book as an adventure of a boy who gets dragged into a stereo where the world is colorless and dull. He transforms this world  life into a vibrant dance party. [picture book, ages 3 and up]

If Not For You by song lyrics by Bob Dylan, illustrated by David Walker

Bob Dylan’s 1970 song “If Not for You” is reinterpreted as a parent/child relationship of unconditional love. [picture book, ages 3 and up]

Get Up Stand Up song lyrics by Bob Marley, by Cedella Marley, illustrated by Vanessa Brantley-Newton

Bob Marley’s daughter, Cedella Marley, has taken her father’s anthem of peace, love, and truth and reenvisions it into an anti-bullying picture book. Her father would be proud! [picture book, ages 3 and up]

Based on the song ‘Three Little Birds’ by Bob Marley, his daughter, Cedella Marley, adapts the lyrics into a cheerful story of a boy who doesn’t let anything get him down. Three colorful birds in his life help to light the way! [picture book, ages 2 and up]

A young activist gets her community to transform her neighborhood for the better in this picture book that brings Bob Marley’s message to a young audience. [picture book, ages 3 and up]

2 thoughts on “Picture Books Based on Song Lyrics”