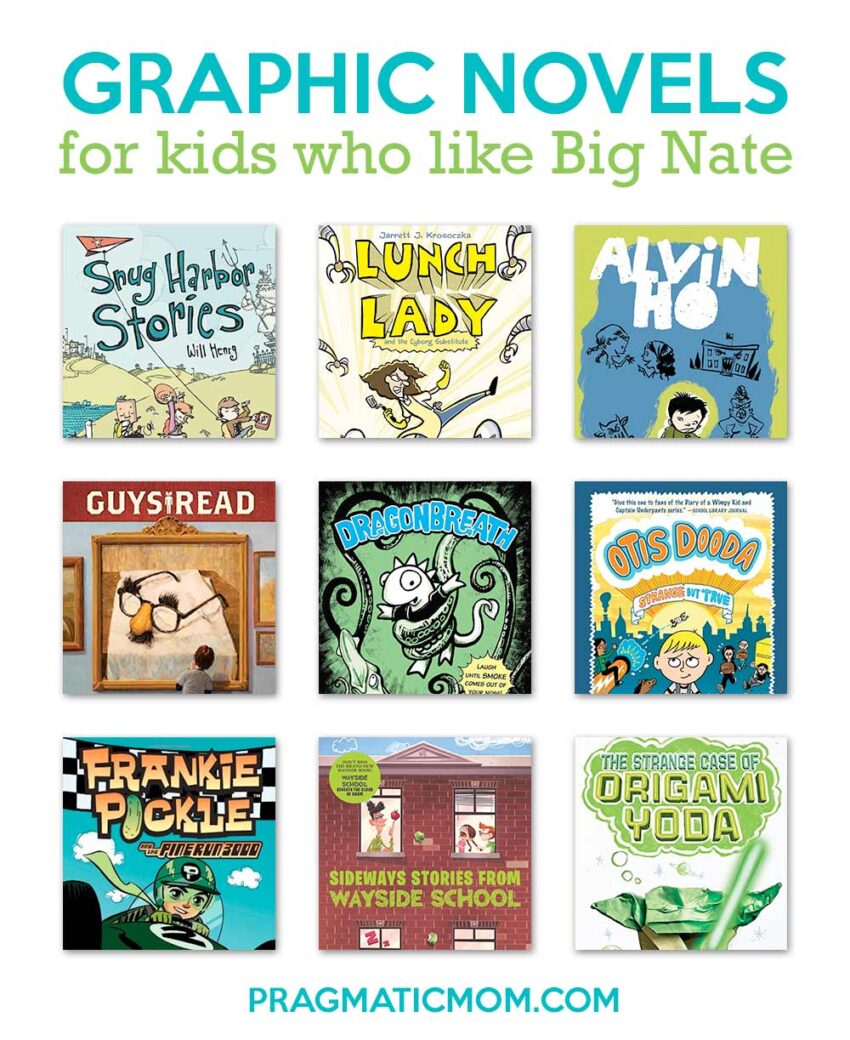 I know a third grade girl who will read ONLY Big Nate and nothing else! Myson started reading Big Nate about that same time and still enjoys these books and now he is in high school. Big Nate fans span a wide spectrum of ages. That’s the beauty of Big Nate!

But there is also a time for branching out. Who better to recommend books for Big Nate fans than Big Nate author, Lincoln Peirce, himself. He guest-authored for me and recommended these graphic novels: 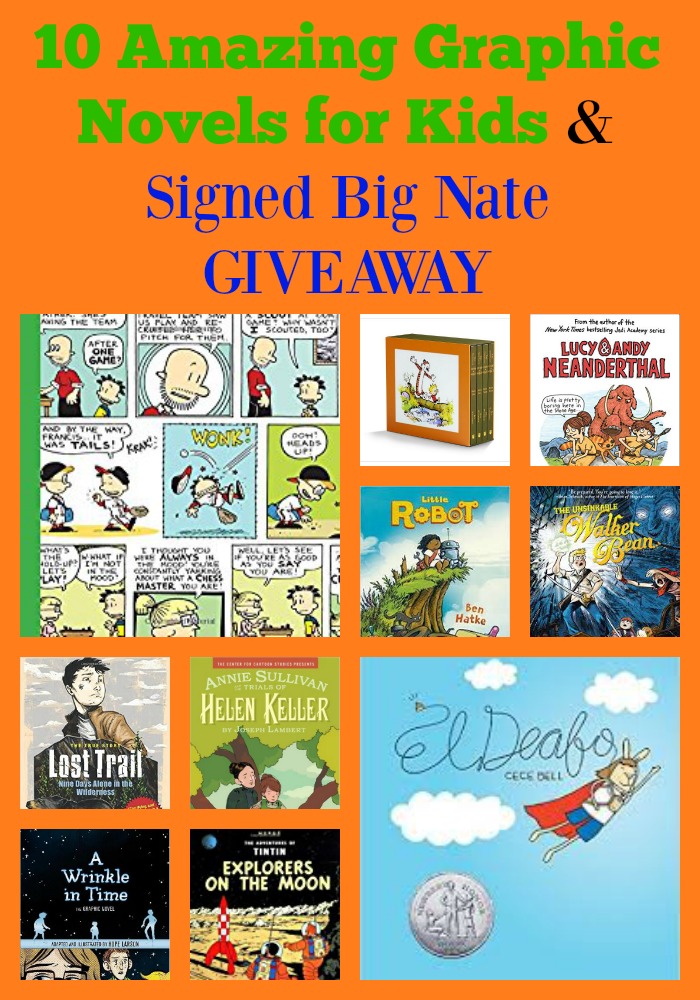 I’ve read my fair share of Big Nate books too. They are great because they capture the social anxieties of elementary and middle school kids so perfectly but also throw in a little philosophical humor akin to Calvin and Hobbes. I think that is the secret sauce to the wide age appeal.

Big Nate: The Gerbil Ate My Homework by Lincoln Peirce

Can you believe that Big Nate books are celebrating nearly 30 years since first coming out? And this book number 23 in the series! With an “every kid” kind of feel and a single dad that is nice but a tad hapless, Big Nate finds the humor in those painful years of middle school. And stay tuned for a forthcoming TV adaptation from Nickelodeon! [graphic novel series, ages 7 and up]

Big Nate: Hug It Out by Lincoln Peirce

This has been a consistent series that gets my son reading over a long period of years. When he was in elementary school, Big Nate got him reading for fun once he was reading independently. In middle school, he appreciated Big Nate’s humor. Now, as a freshman in high school when kids might stop reading for pleasure, this is one of very few books that will catch my son’s interest. Big Nate is the hardest working graphic novel series in the business and really gives you your money’s worth! [graphic novel series, ages 7 and up]

Snug Harbor Stories: A Wallace the Brave Collection by Will Henry

This is one of my favorite new graphic novel series. This is the closest graphic novel series that I’ve found to Big Nate but instead of a suburb, it’s set in a small New England fishing village. Wallace the Brave has the same setup of a group of friends who happen to all be boys, with gentle adventures and a sense of humor that sometimes bends towards philosophy. [graphic novel, ages 7 and up]

These next graphic novels are similar to Big Nate but add in an element of magical realism with an imaginary character in the case of Phoebe and her Unicorn series and superpowers in with Jarrett Krosoczka’s Lunch Lady series.

Lunch Lady and the Cyborg Substitute by Jarrett Krosoczka

It all started with a school visit back to Jarrett’s old school and running into his former lunch lady. How could it be that she had a life outside of the school cafeteria? His musings resulted in this wildly popular graphic novel series that showcases lunch ladies worldwide as superheroes fighting evil. [graphic novel, ages 7 and up]

Unicorn Bowling: Another Phoebe and Her Unicorn Adventure by Dana Simpson

Phoebe and Her Unicorn reminds me of a female version of Calvin and Hobbes. Her Unicorn is invisible to everyone except Phoebe and is more vain and egotistical than Hobbes. That makes for great humor. Underlying the rapport between the two characters is Phoebe’s struggles with her peers at school. In this book, Phoebe deals with her frenemy Dakota who was once also her best friend. [graphic novel, ages 8 and up]

It might feel like a stretch to get Big Nate fans away from graphic novels but these chapter books chock full of illustrations and rife with humor might do the trick. My first choice to tempt readers to branch out from graphic novels is the Alvin Ho series. Alvin might have more issues than Big Nate when it comes to dealing with his life, but that makes for great comedy. [chapter book, ages 6 and up]

Imagine Big Nate as a young dragon, just living life going to school in a suburb. This is a true hybrid of graphic novel and chapter book, with panels of comic book pages breaking up the chapters. The humor quotient is off the charts! [middle grade, ages 8 and up]

My son found the potty humor hilarious in this series set in New York City. It’s not quite the same vibe at Big Nate where the humor is anchored in normalcy, but the eclectic characters in this book make this book a page-turner and a chuckle-getter. [chapter book, ages 7 and up]

Sideways Stories of the Wayside School series by Louis Sachar

The oddness presented as every day is the charm in the Wayside School series. Weird things happen here but the reader just deals with it. In fact, it’s what the reader wants to uncode with each funny, weird, or silly story. [middle grade, ages 8 and up]

The Strange Case of Origami Yoda series by Tom Angleberger

An unexpected hero who might be on the autism spectrum earns the respect and friendship of peers in this series that coalesces humor, Star Wars characters, and understanding our differences. [middle grade, ages 7 and up]

Diary of a Wimpy Kid series by

Mistakes Were Made by Stephan Pastis*

*Stephan Pastis has been accused of sexual misconduct.

Art imitates life in terms of making mistakes. But Timmy Failure and his invisible friend, a polar bear, make for a hilarious crime-solving partnership akin to The Pink Panther. [middle grade, ages 8 and up]

This series is unlike any other out there, and even just peeking into the books, kids will be amazed to see that they actually look fun. Told in the style of a script or screenplay and packed full of pictures, text message/online exchanges, and snarky “inked-in” asides, kids reading this book might not even realize that they are, indeed, reading. But as much of a blast as reading about the Tapper Twins is, their stories tackle tough, important subjects, and will leave kids with something worthwhile to chew on long after they’ve turned the last page. [chapter book, ages 8 and up] from 10 Books to Turn Reluctant Readers into Eager Ones!

Tales of a Sixth Grade Muppet series by Kirk Scroggs

I think this series is a slightly older version of Diary of a Wimpy Kid series with a bit of magical realism thrown in. It’s funny with a lot of middle school angst with this main character who wakes up to find that he is a muppet but then must go about his life including attending middle school. [middle grade, ages 8 and up]

Giveaway: 3 copies of Big Nate: The Gerbil Ate My Homework!

We are giving away 3 copies of the newest Big Nate book, The Gerbil Ate My Homework!

Please fill out the Rafflecopter below to enter. We can only mail to U.S. and AFO addresses.