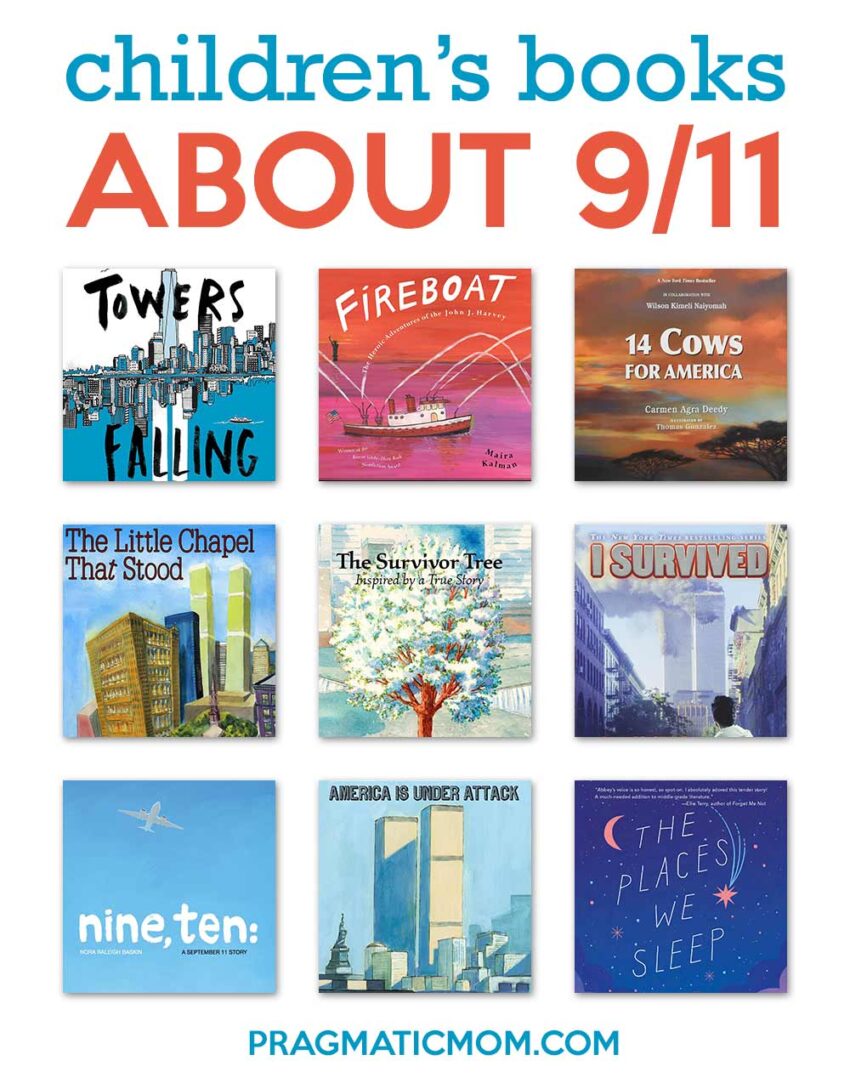 Living near Boston where the 9/11 planes took off, we seem to be one degree away from knowing someone who perished that day.

For me, my neighbor was one of the pilots flying out of Boston. My neighborhood cafe and bakery had a daughter on that flight. My old neighbors from the South End has a dear friend who worked in the Twin Towers and never had a chance to get out.

I also wanted to remember Boston College alumni Welles Crowther, known as The Man in the Red Bandana, who died that day leading at least a dozen people out of the burning tower to safety. He put out fires, helped those in need, carried a woman on his back while leading a group down the only open staircase. He returned into the building to help more people when the South Tower collapsed at 9:59 am. Welles was just 24 years old.

Deja is ten and her family of five live in a homeless shelter. She doesn’t understand why her father can’t work. At her new school, the curriculum explores home, community and the two towers that were once visible from the school’s windows. With two new friends, each also hurting in ways that Deja is just beginning to understand, they piece together why the tragedy of 9/11 still affects them deeply and personally today. This book is excellent for helping readers understand homelessness and how mental illnesses can be the root cause of it. [middle grade, ages 9 and up]

Fireboat: The Heroic Adventures of the John J. Harvey by Maira Kalman

The John J. Harvey fireboat was in retirement since 1995 but on September 11th, 2001, Harvey is called back into action to battle the flames, showing that old heroes never die. [picture book, ages 4 and up]

The Little Chapel That Stood by A. B. Curtiss

Inexplicably, a little historical chapel less than 100 yards from the Twin Towers survived, giving hope to the devastation. [picture book, ages 9 and up]

The Survivor Tree: Inspired by a True Story by Cheryl Somers Aubin, illustrated by Sheila Harrington

A tree that miraculously survived the ashes and rubble from 9/11 is a story of hope, resilience, and healing. [picture book, ages 8 and up]

I Survived the Attacks of September 11, 2001 by Lauren Tarshis, illustrated by Scott Dawson

Lucas is upset about his parents wanting him to quit football, so he takes the train to NYC to talk to his uncle who works as a fireman. The day is September 11, 2001. [chapter book, ages 8 and up]

“There were lots of good details about what the building looked like after it was hit, how Risha and Scott got out of the building, the chaos on the streets, and even little things, like high heeled shoes being abandoned on the sidewalks. The book is tense, but not overly scary, and everything is okay at the end, which is helpful for my sensitive students who still want to know about this historic event. There’s a nice bibliography in the back, as well as some notes about Messner’s personal experience on that day.” [chapter book, ages 7 and up]

Yusuf Azeem is Not a Hero by Saadia Faruqi

“Yusuf and his family live in the small Texas town of Frey where his father runs the A to Z Dollar Store and his mother does freelance writing from her new office in the garage. Yusuf and his best friend Danial are ready to ROCK 2021. Middle school has not only lockers and Chrome Books, but a robotics club that the boys have been looking forward to for years. However, Yusuf finds a progression of nasty notes in his locker that make him worry about how others perceive him. There’s a lot of talk about the 20th anniversary of the 9/11 Twin Towers attacks, and anti-Muslim feelings in the town are running high. This causes problems for the Muslim community when Mr. Grant challenges the permits for the mosque that they are building just outside town, and his son, Ethan, continually makes inappropriate remarks in school. Yusuf’s father once stood up to an armed man who tried to rob his store, but Yusuf doesn’t think that he is brave enough to stand up to anyone. It helps a little that his Uncle Rahman has given Yusuf the journals that he kept as a high schooler in 2001, and Yusuf is able to see a first-hand account of the events occurring after 9/11, but it’s still a complicated matter, and Yusuf is saddened to see how little has changed in the intervening 20 years. He and Danial are on the robotic team but have to negotiate with their parents to allow them to go since their Sunday school is being held on the same day as robotics practice. Yusuf has befriended Mr. Grant’s nephew, Jared, who seems nice but is swayed by his family’s opinions. Jared’s grandmother is a frequent customer at the A to Z store, and a believer that “You can only make enemies with strangers”. When the racial tensions mount and there is a town meeting about the permits, Yusuf finds out that while most of the town supports the building of another house of worship, a hate group, the Patriot Sons, is determined to keep Frey free of “outsiders”. When one of Yusuf’s computer projects gets him unwanted attention at school, will he ever feel at home in Frey again?” [middle grade, ages 8 and up]

Four kids who don’t know each other are inextricably linked following the attack on the twin towers. [chapter book, ages 8 and up]

America Is Under Attack: September 11, 2001: The Day the Towers Fell by Don Brown

“Corey and his friend Leila live in New York City near Central Park West with their families. Corey’s grandfather, Papou, hasn’t been around for a while because he has gone to Canada, and Corey misses him. His grandmother was killed in one of the Twin Towers during 9/11. When a picture from Leila’s aunt causes Corey to hallucinate that he has traveled back in time, he soon finds out that it is not a hallucination– Papou is a member of the Knickerbocker club and has the genetic ability to “hop” through time if he has a metal artifact from a particular year. Corey has inherited it. Not only that but after a trip to 1862, Corey realizes that he is a rare “throwback” who can actually alter the linear flow of time. Papou has tried and tried to save his wife, but has always failed, which give Corey the idea to try himself. Unfortunately, he gets stuck back in 1862 after he is robbed of his cell phone and coins from the present day. He falls in with Quinn, a cowboy from the west, and the two work together to try to find out who robbed him so he can get back. In the present day, Leila is worried but also finds out some interesting information from her aunt that might help. Will Corey be able to survive and make it back to his own time?” [middle grade, ages 8 and up]

The Places We Sleep by Caroline DuBois

From From the Mixed Up Files of Middle Grade Authors interview with Caroline DuBois:

“It’s early September 2001, and twelve-year-old Abbey is the new kid at school. Again.

I worry about people speaking to me / and worry just the same / when they don’t.

Tennessee is her family’s latest stop in a series of moves due to her dad’s work in the Army, but this one might be different. Her school is far from Base, and for the first time, Abbey has found a real friend: loyal, courageous, athletic Camille.

And then it’s September 11. The country is under attack, and Abbey’s “home” looks like it might fall apart. America has changed overnight.

How are we supposed / to keep this up / with the world / crumbling / around us?

Abbey’s body changes, too, while her classmates argue and her family falters. Like everyone around her, she tries to make sense of her own experience as a part of the country’s collective pain. With her mother grieving and her father prepping for active duty, Abbey must learn to cope on her own.” [middle grade, ages 8 and up]

“This was absolutely harrowing. The details of what Brandon and Richard had to do just to get out of the building were vivid without being too graphic and made me feel like I was right there. The same is true of Reshmina’s struggles trying to keep her family safe when her twin brother is determined to join the Taliban and her village is under attack. There is a lot of information about what life was like for Reshmina, which was quite interesting, and the politics of the situation were well balanced. Notes at the back are helpful for young readers who won’t have as much familiarity with the topic. This is probably the best book about 9/11 that I’ve read.” [middle grade, ages 9 and up]

The nonprofit Tunnel to Towers Foundation, which supports Gold Star and fallen first responder families, is starting a 9/11 Institute to provide tools to help schools teach about the Sept. 11, 2001, terror attacks. Frank Siller, the nonprofit’s founder, says lessons on 9/11 are required in 16 states. 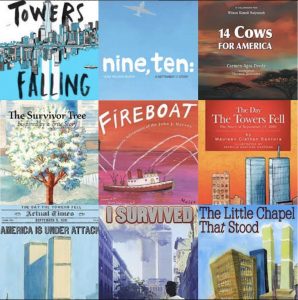