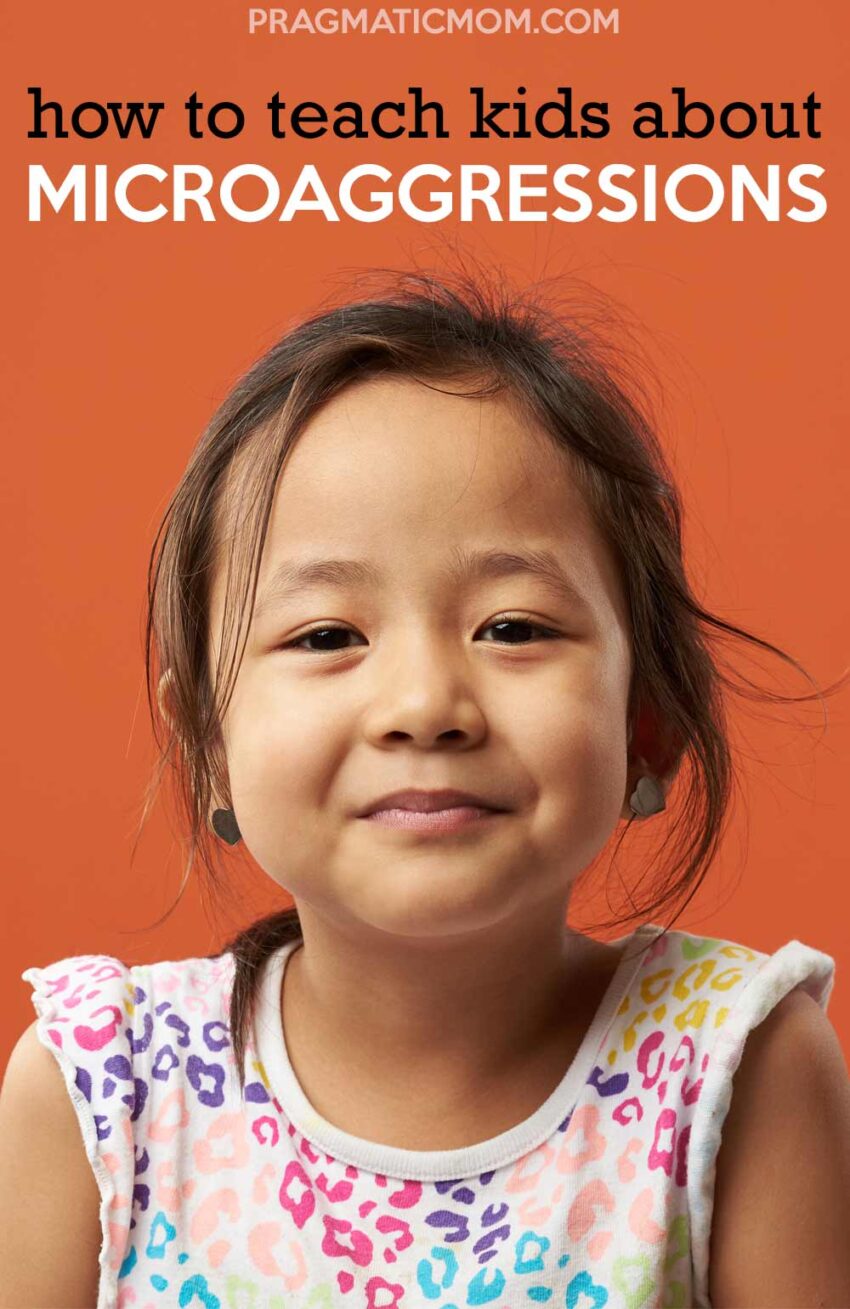 I think I have been asked “Where am I from?” a lot since I was a child. It was a question that always felt a little uncomfortable, even if the person expressed a genuine curiosity. If I deflected from the implied question and answered that I was from California, or Southern California, or Seal Beach as the questioning progressed, it would inevitably lead to “but where are you from from?”

This was before I had the tools to recognize that this question is a microaggression. It was always confusing if this was a racist question or genuine curiosity as I am of mixed race of Asian descent, thus hard to pinpoint from a geographic perspective. I wish that I had known that an appropriate response would have been to say, “My grandparents came from Japan in the early 1900s and my father came from China for his Ph.D. at UCLA.” Or even, “Do you realize that’s kind of a racist question?” Context is everything, but it’s also hard to judge on the fly when you are in a conversation with a stranger.

And that’s not to say that I’m not guilty of asking questions either. I asked my daughter’s friend in college where he learned to speak such perfect English because I knew he was from Thailand and I thought that maybe he went to an American School there (he did). She called me out that my question was racist and I simultaneously both chastened by my question and proud of my daughter’s willingness to intervene.

From my point of view, I had met a bunch of kids from The American School when I lived in Tokyo for a summer and it blew me away how these kids who had never left Japan spoke such perfect English, down to American slang! It always impresses me … not just fluent English but “English as if you grew up here.”

I wish that my public school system taught about racism as part of the curriculum. They teach about bullying, suicide prevention, and stranger danger. Perhaps racism was left off because it didn’t seem like an issue. But, of course, it’s clear these days that racism is the elephant in the room. Microaggressions might be a good place to start!

How about you? What books, videos, or materials would suggest for a unit on teaching kids about microaggressions? Thanks so much for sharing!

Microaggression is a term used for brief and commonplace daily verbal, behavioral, or environmental indignities, whether intentional or unintentional, that communicate hostile, derogatory, or negative prejudicial slights and insults toward any group, particularly culturally marginalized groups. from Wikipedia

“In a 2007 article for American Psychologist, Sue and six other researchers identified three categories of racial microaggressions:

Let’s start with this humorous video that makes the point of how the question, “Where are you from?”, is a microaggression.

(The creator of the video notes that ff you’d like to use this video for your company, school or other organization please email KenTanakaLA (at) gmail (dot) com for licensing information.)

Examples of microaggressions in the classroom from Southern Illinois University:

Some examples of microaggression (DU CME):

Ways of responding to microaggressions when we witness others doing them:

Examples of Ways to Respond to Microaggressions

When one student suggests that a statement made by a character in a book is offensive to Asian women, another student says ‘That’s not offensive. That’s reality.’

Response: ‘I understand that you disagree. Can you tell me what you mean?’

Example 2:  Paraphrasing as a means of reflection

A white student says, ‘I don’t understand why we always have to talk about race. It’s not always about race.’

Response:  ‘It sounds like you are concerned and frustrated about the focus of discussion. What is it that concerns you most?’

A male student responds to a comment with a joke, ‘Does your mom know you’re gay?’

Response:  ‘I didn’t find that joke funny. Please remember our class ground rules and be respectful of each other.’

When asked a question about terrorism, a student suggests that another hijab-wearing student would be better able to answer the question.

Response: ‘She can decide if she would like to comment. I’m interested in the perspectives of all the students in this class so that we can think about this topic together. Over the years, many groups have engaged in terrorism. Can anyone give me some examples?’

Where Are You From? by Yamile Saied Mendez, illustrated by Jaime Kim

Lulu the One and Only by Lynnette Mawhinney, illustrated by Jennie Poh

“… Lulu tells her readers, there is always THAT question, the one she just hates, that hurtful, insensitive question people are always asking: “What are you?” …

Lulu’s story is upbeat and friendly, and she’s a happy character who is very proud of her heritage, but her dismay at being asked what she is instead of who she is is very apparent. Rather than just becoming withdrawn and angry about it, she turns to her older brother for advice, demonstrating the power of family for support, as well.

Jennie Poh’s colorful illustrations strike just the right balance between playful and serious. What are you? is just one kind of microaggression that people of color face on a daily basis. Lulu the One and Only is a book that can empower young children who are dealing with people’s reactions to their biracial identity, and it is a book that white people, adults, and children, can benefit from as well, helping them understand what it feels when people of color are asked insensitive questions, the kind that white people are not usually asked.” [picture book, ages 4 and up]

Farah and her younger brother endure straight-up bullying by the new girl, Dana, but I include this book because the type of bullying is subtle enough for the adults to ignore it. In the first instance, Dana makes fun of Farah’s name by comparing it to “pharaoh.” Dana also walks with a fake limp makes fun of Ana who has cerebral palsy. This book can be used as an example of comparing quiet bullying to microaggressions — where is the line between them? Allies also figure into this story and can be another point of discussion. How should an ally get involved? How can you be an ally during a conflict? [early middle grade, ages 8 and up]

New Kid is the first graphic novel to be awarded the Newbery prize and it’s easy to see why! Embedded in a coming of age story of being the new kid at a New York City private prep school is the friction of racism in the form of microaggressions. There’s the obnoxious kid Andy who doesn’t seem to realize that Ramon is Nicaraguan, not Mexican. It’s not just the kids but the adults at Jordan’s school commit microaggressions. A white adult assumes that Mr. Gardner coaches a sport because he’s black. The librarian at the book fair picks “urban grit” books for Jordan and Drew. And my favorite, Mrs. Rawle, who is the worst kind: she thinks she’s “woke” but she’s actually racist. Jordan’s year at Riverdale Academy Day School also depicts kids of all different backgrounds struggling to fit in, and, in learning about each other, they triumph in the end by not just getting through the year, but by forging bonds that connect them to each other. Jerry Craft’s graphic novel points out our racist blind spots. It’s a book that is both empowering and uplifting, making us, the reader, better people for having read this book. [middle grade graphic novel, ages 8 and up]

Jerry Craft on experiencing microaggressions  and including this material in New Kid:

Cilla Lee-Jenkins is not excited about the new addition coming to her family. She refers to the new baby as “the Blob.” The new baby is also bringing out tensions on both sides of her family, with hints that it could be related to race. Cilla is bi-racial. Her father is Chinese American and her mother is white. When she’s with the white side of her family, she experiences microaggressions but doesn’t quite know what to make of them. When adults ask her questions such as “Where are you from?” and “What are you exactly?”, Cilla answers with an innocence that she’s a future author extraordinaire. Susan Tan treats microaggressions in an age-appropriate way to call it out quietly without having it damage her protagonist’s spirit.

Pair this book with picture book, Where Are You From? [middle grade, ages 8 and up]

Racism and White Fragility at #ALAMW19