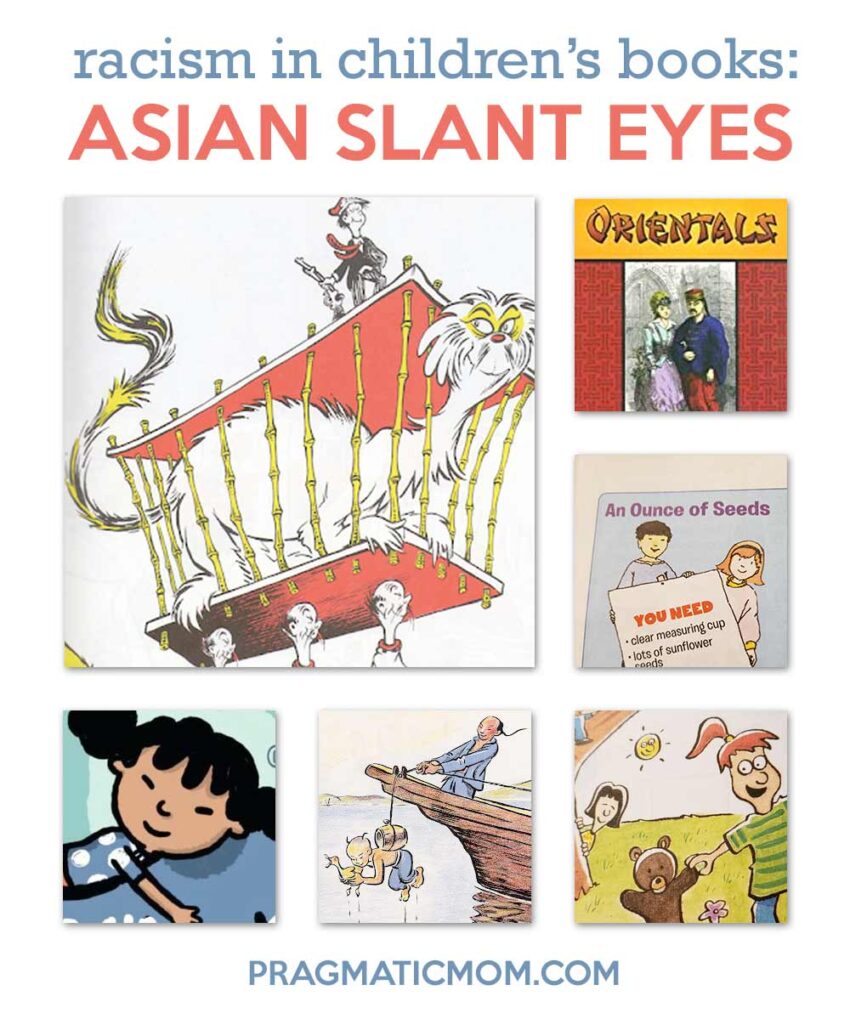 “Chink!” “Jap!” “Where are you from?” “Do you eat dog?” “Why don’t you go back to where you came from?” “Do you know Kung-Fu?” From the racist to the innocuous, issues of culture, ethnicity, and discrimination are prevalent themes for Asian minorities in the United States.

The Asian desire to be “American” and fit into mainstream society in the U.S. can be challenging as reminders that they are “perpetual foreigners” can be seen in jokes, teasing, and at times outright racism. from Psychology Today

Anti-Asian racism recently has been cited as 100 reported incidents per day. And that’s just the reported ones. There’s violent racism and casual racism against Asian Americans so today I am focusing on the depiction of Asian characters in children’s books, specifically “slant eyes.”

Let’s start with Italian chef Gianluca Gorini who runs the Michelin-starred restaurant daGorini in the Italian town of San Pietro in Tuscany. He posted a photo of his team making slant-eyes and wearing racist hats on Instagram. It’s racism as “humor.” 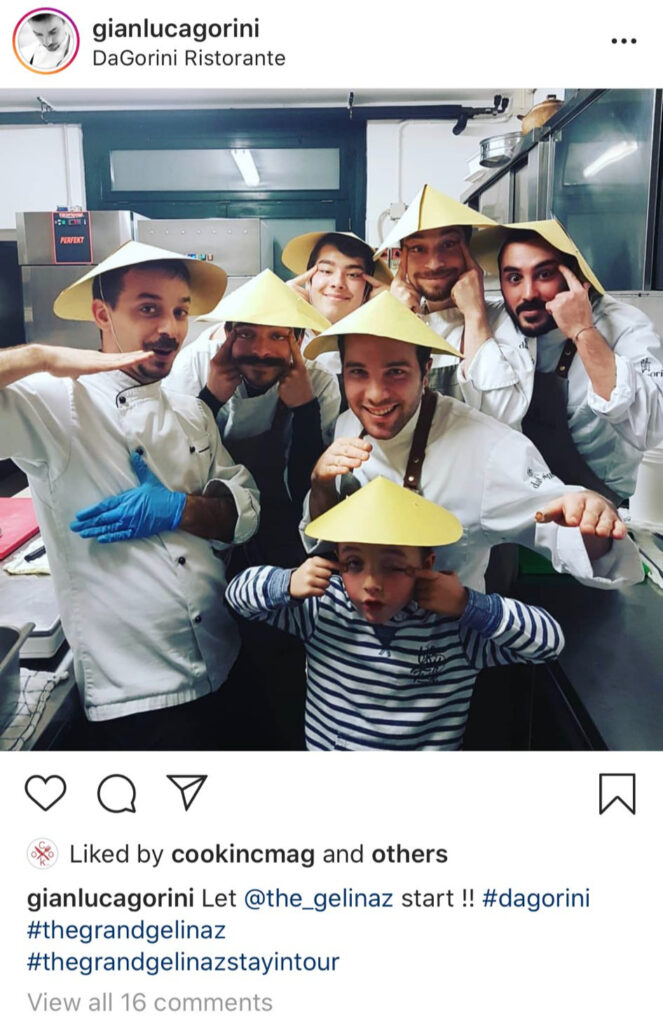 Both Tahhan and Bencosme have apologized for their actions, while Telemundo has suspended them indefinitely.” (from The Undefeated)

Let me follow this up with: it’s also racist when the images are drawn by Asians or Asian Americans. We’ve internalized these orientalist images and been taught that this is how we mark ourselves as Asian. No, it doesn’t have to be this way. Stop drawing slanted eyes. Just stop.

Yellowface is Just as Offensive as Backface

“As Robert G Lee, associate professor of American studies in Providence, Rhode Island, stated in his book Orientals: Asian Americans in Popular Culture: “Yellowface marks the Asian body as unmistakably Oriental; it sharply defines the Oriental in a racial opposition to whiteness.

Yellowface exaggerates ‘racial’ features that have been designated ‘Oriental,’ such as ‘slanted’ eyes, overbite and mustard-yellow skin color”. Mickey Rooney did that for his character Mr. Yunioshi in the film Breakfast at Tiffany’s, which is a prime example of yellowface.” from South China Morning Post

This is by no means an exhaustive list of racist depictions of Asian children in children’s books. In fact, it’s the tip of the iceberg.

This is from Jammy @jamlamlaser:

2nd Asian kid in the book of majority-white kids and animals, and he is ALSO BRIGHT YELLOW.

@SchoolZone WHAT THE HELL. 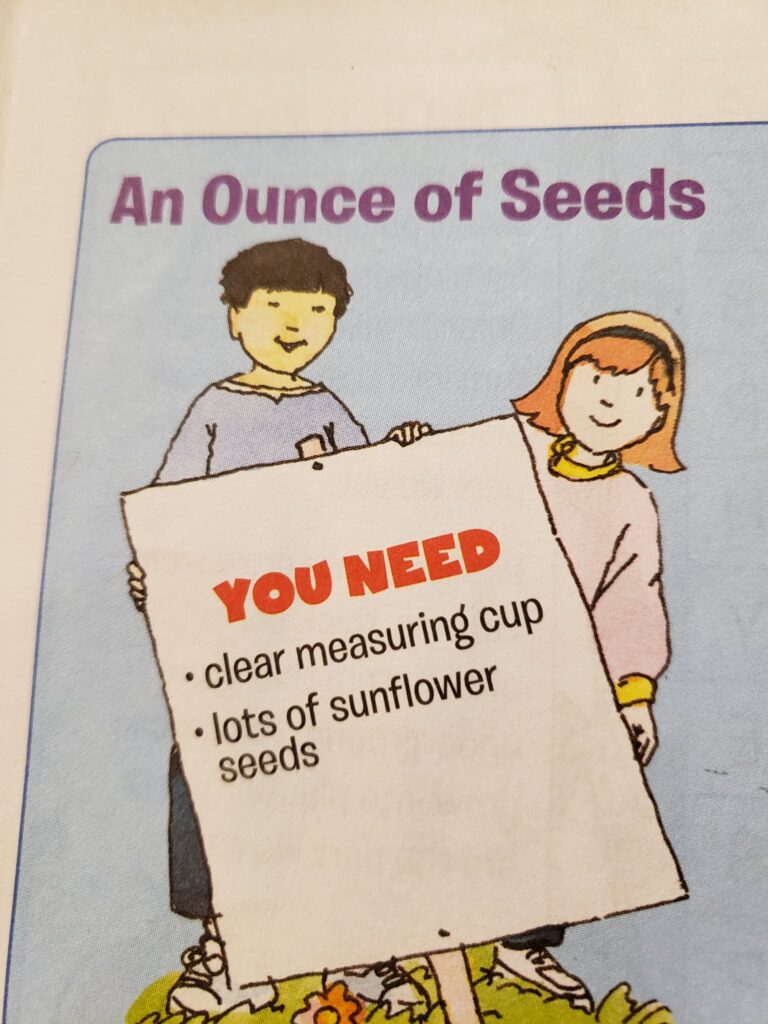 WHAT IS WRONG WITH YOU
@SchoolZone
????? 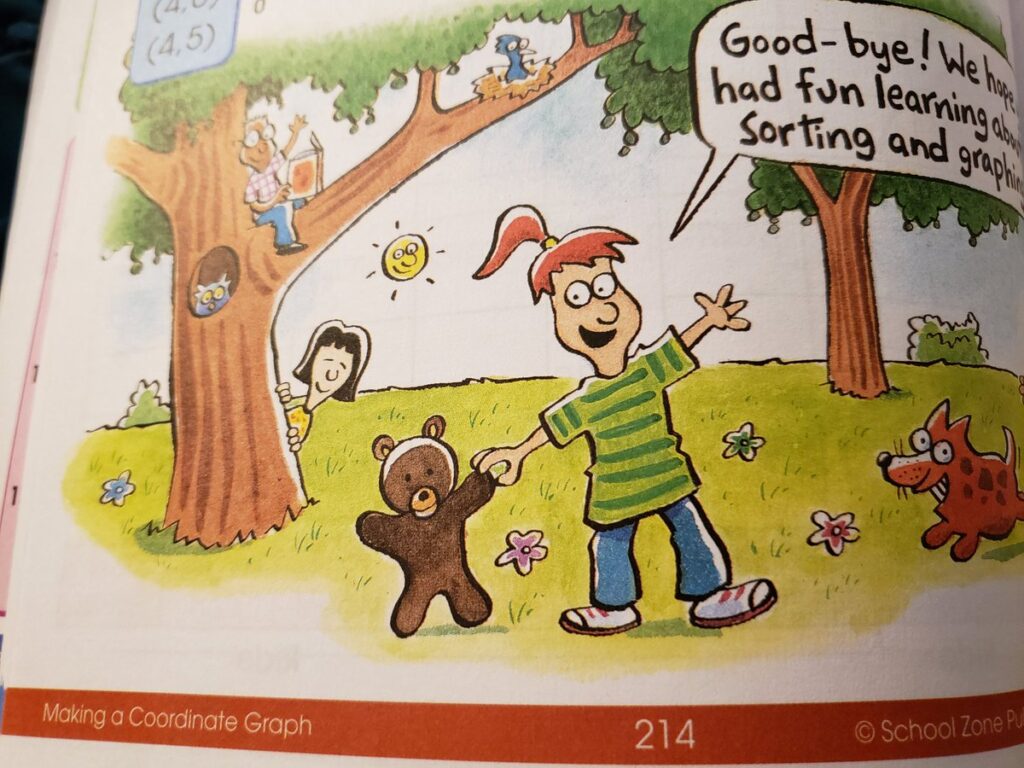 Diana Gutenberger blogs on racist depictions of humans in The Story About Ping. 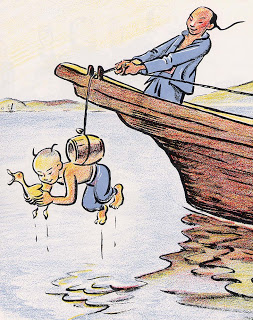 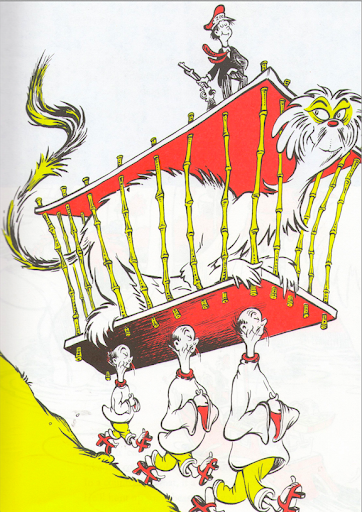 Eyes as slits or slant-eyes is a lazy racist way of illustration and are, by no means, a problem from long ago that is just now surfacing.

These images are from a Pearson ELA “Successmaker” online curriculum in the New York area. The mother and others in her school district complained until they were removed. 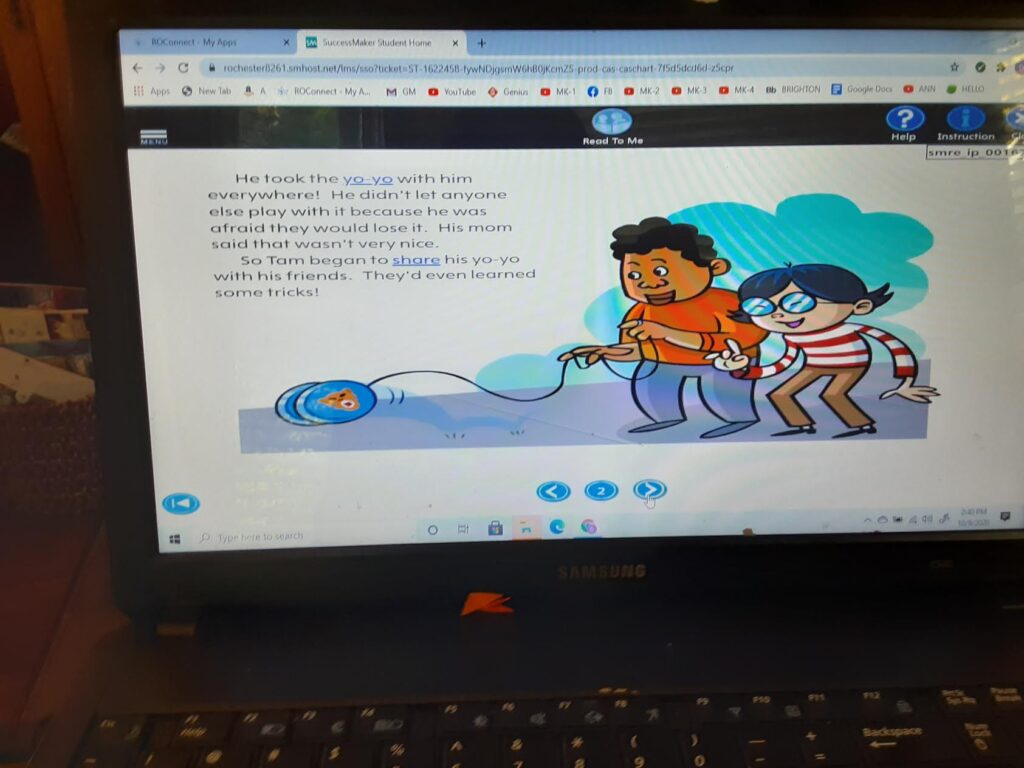 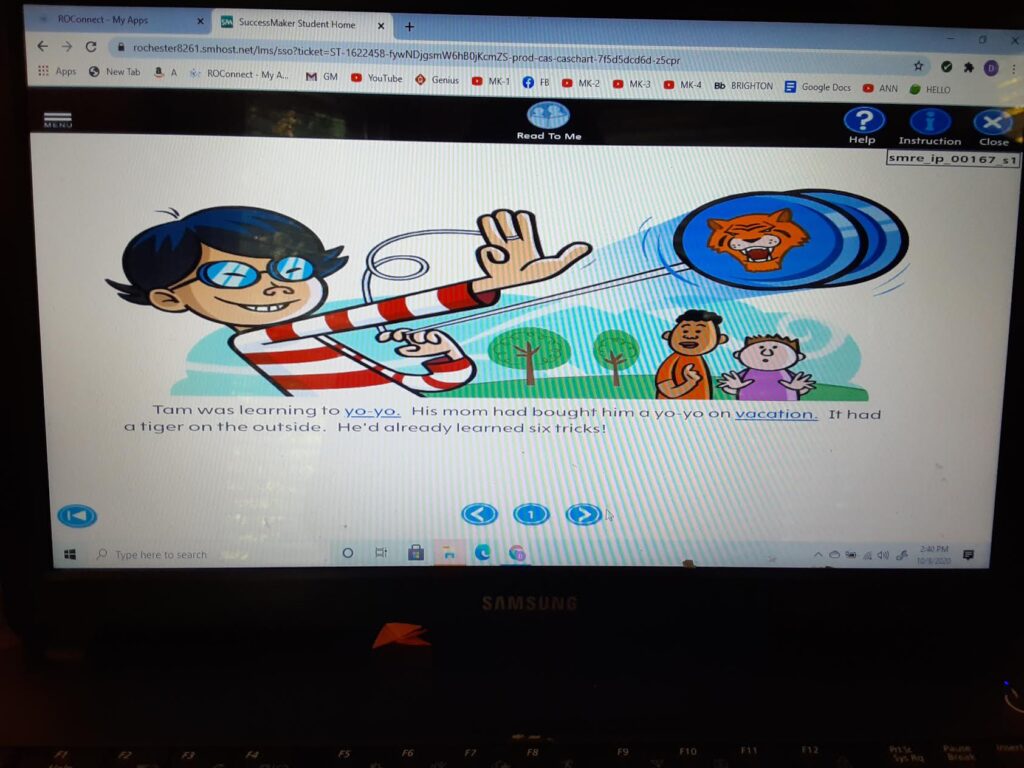 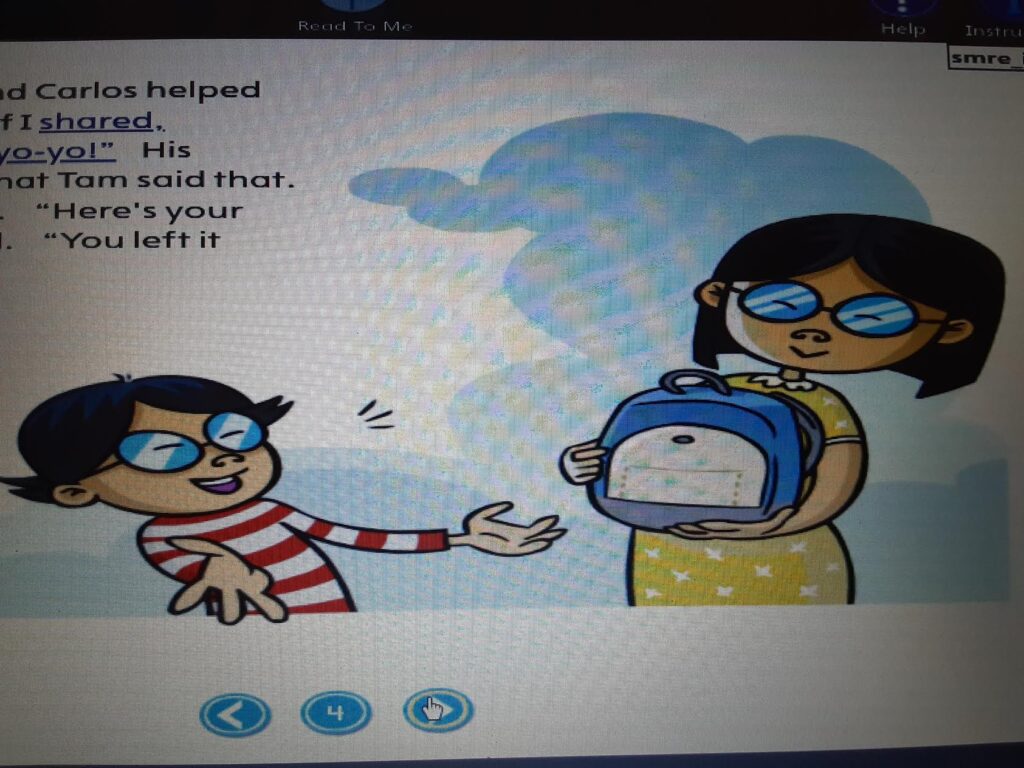 The illustrator subsequently updated the image:

Feel free to add books that you notice that have Asian children drawn with “slant eyes” or eyes as slits. I think you’d be surprised to see how many recently published picture books have racist depictions of Asian children.