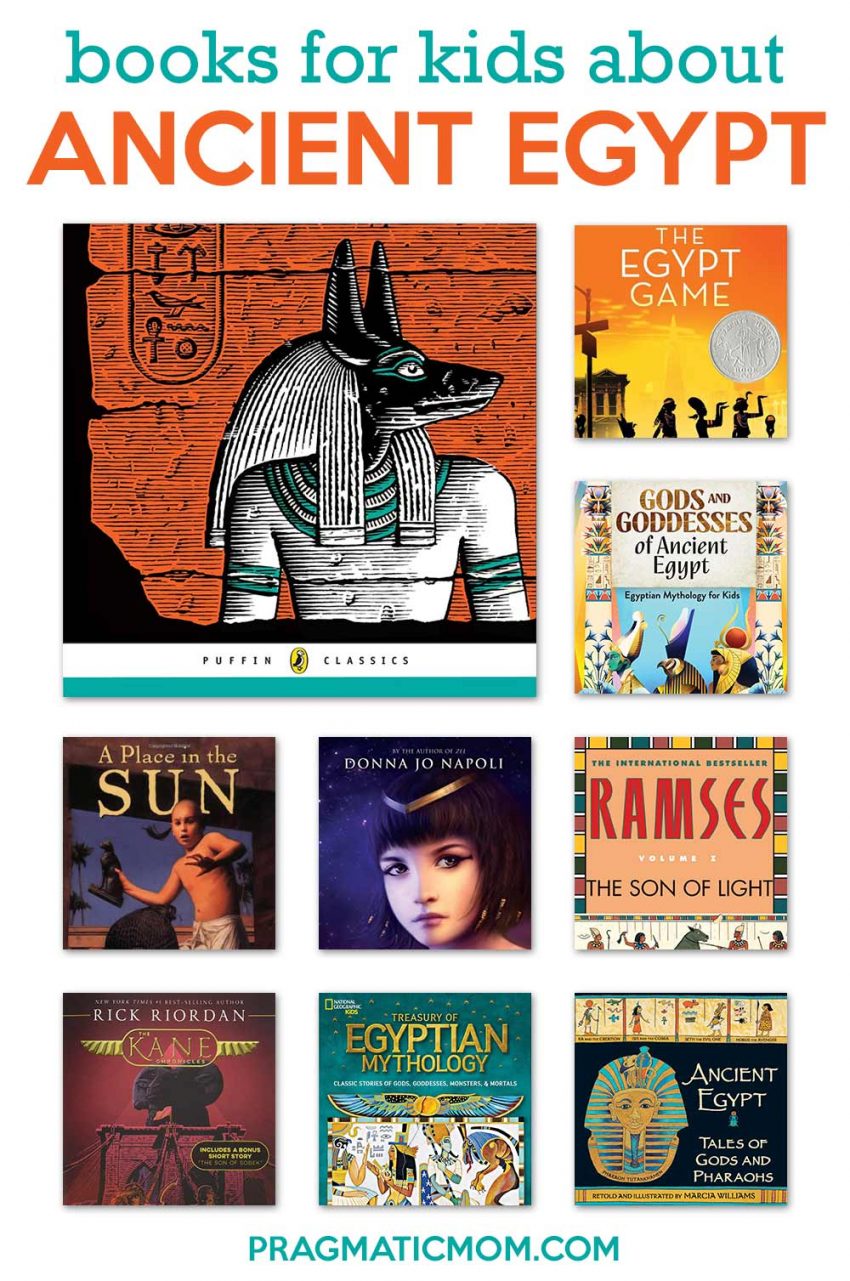 I’ve always had a fascination with Ancient Egypt. It makes me happy that my kids get an introduction to ancient cultures at school. Isn’t it amazing how these books make history from so long ago feel like we are part of it?

And there are still secrets to be discovered from these stories of Pharaohs such as the relationship between the female Pharaoh Hatshepsut and her architect Senenmut … which the first book in this list explores.

Another revelation to me is that the great Pharoah Ramses II is also the Pharoah who wouldn’t let Moses and his people go until 10 great plagues were unleashed on Egypt. The Ramses series by Christian Jacq suggests that Moses and Ramses II were not always adversaries.

I also love how many of the middle grade books that incorporate Ancient Egyptian mythology — the religion of the time — always paves the way for characters in books to have superpowers. Rick Riordan, Marissa Moss, and Donna Jo Napoli all have exciting action adventures with these themes.

Finally, there is something magical about Ancient Egypt that makes it seem like it’s not far fetched to have some kind of magical gift.

What do you think? Are you a fan of this period in time too? What are your favorite books about Ancient Egypt? Thanks for sharing!

Hatshepsut came to the throne of Egypt in 1478 BC. Her rise to power was noteworthy as it required her to utilize her bloodline, education, and an understanding of religion. Her bloodline was impeccable as she was the daughter, sister, and wife of a king. Her understanding of religion allowed her to establish herself as the God’s Wife of Amun. Officially, she ruled jointly with Thutmose III, who had ascended to the throne the previous year as a child of about two years old. Hatshepsut was the chief wife of Thutmose II, Thutmose III’s father. from Wikipedia

My favorite Rick Riordan-like book about ancient Egypt is surprisingly not by Rick Riordan. It’s by Marissa Moss, known for her Amelia’s Notebook series. This has all the same highlights of a Rick Riordan novel: action-adventure, hidden powers from a powerful and newly discovered bloodline, and a battle against evil.

When Talibah and her younger brother, Adom, accompany their father, an academic, to his homeland of modern Egypt on his research assignment, they become involved in a mystery surrounding an ancient, lost pharaoh-a rare queen ruler. Someone has tried to wipe her from the record, to make it appear as if she never existed! She needs Talibah to help her and her high priest, Senenmut, reclaim their rightful place in history. Exotic locales, mysterious strangers, and a sinister archaeologist round out an adventure that is full of riddles, old tales, and, most surprisingly of all, a link to Talibah’s and Adom’s mother, who died mysteriously. [middle grade, ages 8 and up]

I have a tie-in to this story here: The Pharoah’s Secret at the Museum of Fine Arts

I personally loved this series about Ancient Egypt mythology. Sadie and her brother Carter are twins separated during their childhood. Sadie lives in London with the grandparents, and Carter lives in the U.S. with their father after their mother dies in a mysterious explosion. The siblings are reunited when the father, an Egyptologist, conducts a research experiment at the British Museum. The god Set is accidentally released and now Sadie and Carter must learn to harness their own powers to save their father and the world. [middle grade, ages 8 and up]

Carter Kane is your host in this introduction to Egyptian Gods & Creatures, Glyphs & Spells. This primer will also give you back story to the Kane Chronicles. [middle grade, ages 8 and up]

A Place in the Sun by Jill Rubalcaba

The 13th son of his long-lived father, Ramses II, Merneptah was nearing 60 years of age at his accession in about 1213. from Encyclopedia Britannica

Merneptah or Merenptah was the fourth pharaoh of the Nineteenth Dynasty of Ancient Egypt. He ruled Egypt for almost ten years from late July or early August 1213 BC until his death on May 2, 1203 BC, according to contemporary historical records. from Wikipedia

This book is set in the time of Ramses II. When 9-year-old Senmut’s father is bitten by a cobra, Senmut tries to save him by carving a statue because it is believed that it will release the god Sekhmet trapped in the stone. Like his father a master carver, Senmut is gifted with the chisel, but in his haste, he accidentally kills a dove and the penalty is death. Senmut is exiled to the gold mines of Nubia where life is very hard. Determined to save his father, he secretly finishes the statue. When the Pharoah’s son, Merenptah,  is sick, Senmut’s statue is discovered. Can the statue save the Pharoah’s son? Senmut’s life hangs in the balance. [middle grade, ages 8 and up]

Akhenaten, known before the fifth year of his reign as Amenhotep IV, was an ancient Egyptian pharaoh of the 18th Dynasty, who ruled for 17 years and died perhaps in 1336 BC or 1334 BC. He is noted for abandoning traditional Egyptian polytheism and introducing worship centered on the Aten (notably instead of Amun, the temples of which he destroyed, the name of whom he rubbed off and the priests of whom he left without resources). from Wikipedia

When the Pharoah Akhenaten takes power, he decrees that all the old gods must be discarded and replaced by a single god, Aten, the sun god. This is a difficult transition for the Egyptian people, especially for young Tutmose’s father, Harkhuf. A collector of rare animals reflecting the myriad of gods, Harkhuf plots to kill the Pharoah and he needs Tutmose’s help. Tutmose is a talented sculptor, and the faience cat he has made is turned into a weapon. But the Pharaoh Akenaten and his wife Nefertiti have been kind to Tutmose and his brother. What side will he take? [historical middle grade fiction, ages 9 and up]

Lights on the Nile by Donna Jo Napoli

Khufu, known to the ancient Greeks as Cheops, was an ancient Egyptian monarch who was the second pharaoh of the Fourth Dynasty, in the first half of the Old Kingdom period (26th century BC). Khufu succeeded his father Sneferu as king. From Wikipedia

For those who like Ancient Egypt mixed with fairies, this is the perfect historical fiction book that incudes a hint of fantasy. Kepi and her pet baboon Babu are kidnapped. When they are separated, she must make her way to the capital, Ineb Hedj, to rescue her beloved pet. [middle grade, ages 9 and up]

It’s a modern-day story of kids who discover a love of Ancient Egypt with a murder mystery twist.

The first time Melanie Ross meets April Hall, she’s not sure they have anything in common. But she soon discovers that they both love anything to do with ancient Egypt. When they stumble upon a deserted storage yard, Melanie and April decide it’s the perfect spot for the Egypt Game. Before long there are six Egyptians, and they all meet to wear costumes, hold ceremonies, and work on their secret code. Everyone thinks it’s just a game until strange things start happening. Has the Egypt Game gone too far?

Ancient Egypt: Tales of Gods and Pharaohs by Marcia Williams
In this retelling of nine tales of ancient Egypt, Marcia Williams uses her signature comic strip style to capture the rich mythology and early history of this great civilization. Rami, Ra’s beloved cat, highlights Egypt’s many cultural and technological advances along the way. An instantly engaging, accessible introduction to an ancient civilization, this collection of stories is sure to fascinate and inspire young Egyptologists.

Ramesses II, also known as Ramesses the Great, was the third pharaoh of the Nineteenth Dynasty of Egypt. He is often regarded as the greatest, most celebrated, and most powerful pharaoh of the New Kingdom. His successors and later Egyptians called him the “Great Ancestor”. from Wikipedia

Although this is an adult historical fiction series, it appeals to a wide age. Christian Jacq is an Egyptologist and a gifted author who brings the reign of Pharoah Ramses II alive in cinematic detail. The first book starts when Ramses II is a teenager and must pass tests of worthiness. His corrupt Shannar is also angling for the throne. Ramses’ friends include the Hebrew Moses (of Biblical fame), Setau the mage, Ahmeni the frail scholar. The five-book series encompasses his sixty-six-year reign. [young adult, ages 12 and up]

I found nonfiction books on Ancient Egypt that cover gods, pharaohs, and more!

Ancient Egypt: Tales of Gods and Pharaohs by Macia Williams

In this retelling of nine tales of ancient Egypt, Marcia Williams uses her signature comic strip style to capture the rich mythology and early history of this great civilization. Rami, Ra’s beloved cat, highlights Egypt’s many cultural and technological advances along the way. An instantly engaging, accessible introduction to an ancient civilization, this collection of stories is sure to fascinate and inspire young Egyptologists. [nonfiction middle grade, ages 6 and up]

The stories are embellished with sidebars that provide historical, cultural, and geographic context and a mapping feature that adds to the fun and fascination. Resource notes and ample back matter direct readers to discover more about ancient Egypt. [nonfiction middle grade, ages 8 and up]

These stories include the great myths – of Amen-Ra, who created all the creatures in the world; of Isis, searching the waters for her dead husband Osiris; of the Bennu Bird and the Book of Thoth. But there are also tales told for pleasure about magic, treasure and adventure – even the first-ever Cinderella story.* [nonfiction middle grade, ages 10 and up]

* The first ever Cinderella story is from China.

Featuring illustrated myths of incredible Egyptian gods and goddesses, these stories describe the magic each deity performed along the Nile. You’ll also learn about how Egyptian mythology was a key part of ancient Egyptian culture, like pyramid building, the mummification process, and even the worshiping of cats. [nonfiction middle grade, ages 8 and up]

The Pharoah’s Secret at the Museum of Fine Arts

The Pharaoh’s Secret: Like The Red Pyramid But Better! 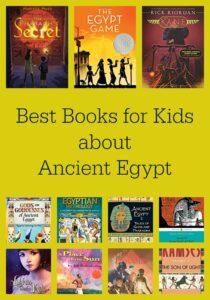 1 thought on “Best Books for Kids about Ancient Egypt”