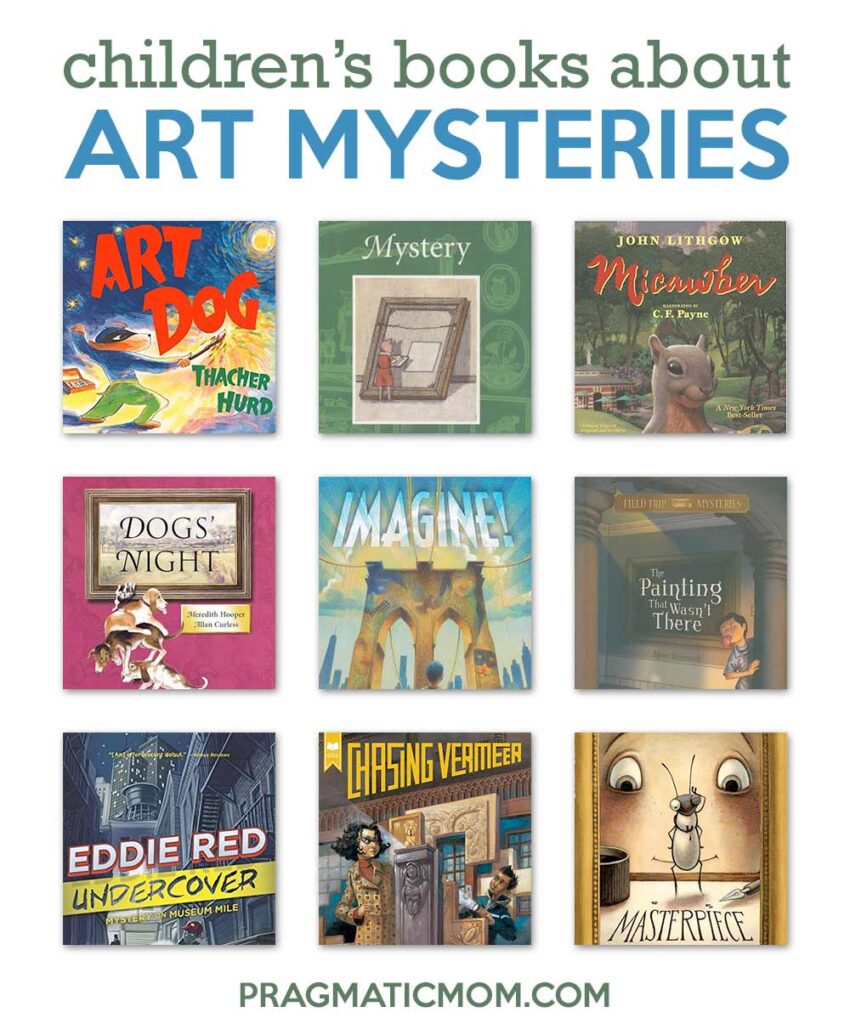 The art heist mystery at the Isabella Stewart Gardner Museum inspired this book list. I have compiled a list of children’s books of mysteries in museums below. What books am I missing? Thanks for adding to this list!

Arthur Dog leads a quiet life as a guard at the Dogopolis Museum of Art, except for nights when the moon is full. On those nights, something crazy happens. On those nights, he’s Art Dog. A tagger? Or maybe more of a Banksy. He was painting on one of those nights when the unthinkable happened. Someone took off with the Leonardo Dog Vinci painting from his museum and replaced it with a Mona Lulu. In a case of mistaken identity, Art Dog is put into jail. Armed with his paints that turn painted objects into real-life things, he captures the thieves. Rewarded with an art show of his own, Art Dog paints a masterpiece in the sky without revealing his identity. [picture book, ages 4 and up]

–> compare the painting that was stolen at the Dogopolis Museum of Art with the ones missing from the Isabella Stewart Gardner Museum. Which one is the most similar?

A little piglet and her grandfather draw at the museum every Tuesday. They notice something peculiar. Parts of several paintings are missing. The raccoon is fingered as the theft, but the little piglet follows the clues to solve the mystery. The readers can too! Just look carefully at all the illustrations. [picture book, ages 4 and up]

Did you know that the Isabella Stewart Gardner Museum officials on Monday reiterated their promise of a $5 million reward for information leading to the recovery of the works in good condition?

Clue:  two large Rembrandt canvases were cut suggest that the thieves were novices in the value of the art. From the New York Times.

Micawber, a squirrel fascinated by art, leaves a museum with an art student and secretly uses her supplies to make his own paintings.

The dogs depicted in the paintings have an annual event. On Dogs’ Night, they all On their annual Dogs’ Night, they all leave their paintings for a night of frolicking and fun. This year is different though. Four of the dogs accidentally return to the wrong paintings. For one year, the dogs cause a sensation at the art museum. Are these painting forgeries? Finally, Dogs’ Night comes around again, and dogs return to their correct paintings. The four paintings all hang in the National Gallery in London. [picture book, ages 4 and up]

A boy enters the Museum of Modern Art (MOMA) where the artwork speaks to him. The paintings come to life and follow him out for an adventure that changes how he sees art forever. Is it his imagination at work? [wordless picture book, ages 4 and up]

The Painting that Wasn’t There: Field Trip Mysteries by Steve Brezenoff, illustrated by Marcos Calo

For readers that live near art museums where famous paintings have been stolen like Boston’s Isabella Stewart Gardener Museum, this mystery might seem predictable. Still, Steve Brezenoff does a good job introducing a wide cast of suspicious characters. James Shoo and friends use their acute powers of observation to follow the clues in time to stop an art theft. The reader will have fun honing in on the clues as well. [early chapter book, ages 6 and up]

Sixth-grader Edmund Lonnrot’s photographic memory and artistic skills are put to use by the NYPD to catch a ring of art thieves. His best friend Jonah’s OCD comes in handy when trying to figure out the thieves’ strategy that involves a geometrical puzzle as to where they will strike next. Edmund’s private school is also on the line; if he can help catch the thieves, he can earn next year’s tuition. I’m looking forward to the next book in this series; Marcia Wells’ mystery is well-paced. She mixes humor and action, creating a compelling read that will draw in both boys and girls. Her characters are spot on and feel like real people; her background as a middle school teacher has clearly come into play! [middle grade, ages 8 and up]

Called the Da Vinci Code for kids, Balliet combines an art quest mystery centering around Dutch master artist Vermeer. When an invaluable Vermeer painting disappears, Petra and Calder are caught in an international art scandal. It will take their knowledge of the artist plus their clue-solving ability to crack this case. [middle grade, ages 9 and up]

Masterpiece by Elise Broach with illustrations by Kelly Murphy

This is Cricket in Times Square meets Chasing Vermeer. A beetle with a talent for drawing to rival Albrect Durer befriends a young boy in this caper involving art forgery to combat an art heist. Set in New York and centered around the Metropolitan Museum of Art, this is a fun mystery adventure. Art thefts including the works stolen from the Isabella Stewart Gardner Museum are also mentioned in this book (p. 97) which makes this especially fun for this book list. [middle grade, ages 8 and up]

This is a beloved classic from my childhood and it made me harbor fantasies of running away and living in an art museum like Claudia and her younger brother. Steeped into this mystery is the question of the origin of a statue. Is this a Michaelangelo? Claudia must go through the mixed up files of Mrs. Basil E. Frankweiler to find out. [middle grade, ages 8 and up]

Under The Egg by Laura Marx Fitzgerald

For fans of From the Mixed Up Files of Mrs. Basil E. Frankweiler, this is the next closest. Seg in Manhattan (also), this mystery revolves around a Renaissance Madonna and Child portrait, Nazi Germany, and a secret that 12-year-old Theodora must solve involving her recently deceased grandfather. Think Grey Gardens meets From the Mixed Up Files in this thrilling and satisfying mystery. [middle grade, ages 8 and up]

Celine’s divorced African American parents are part of New York City’s elite; her father is a partner at a large investment bank, and her mother is a curator at The Metropolitan Museum of Art. When two small and not particularly valuable paintings go missing, Celine’s mother is under suspicion. The paintings’ history is mired in the racial tensions of the Deep South. As Celine closes in on the lost paintings, she is drawn into a bitter struggle that can rewrite history. Who knew curating an art show could be so dangerous? [young adult, ages 14 and up]

Best Mysteries for Kids and the Kid Lit Blog Hop 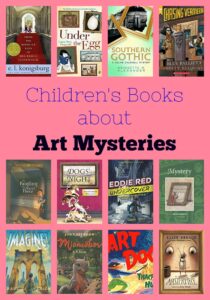