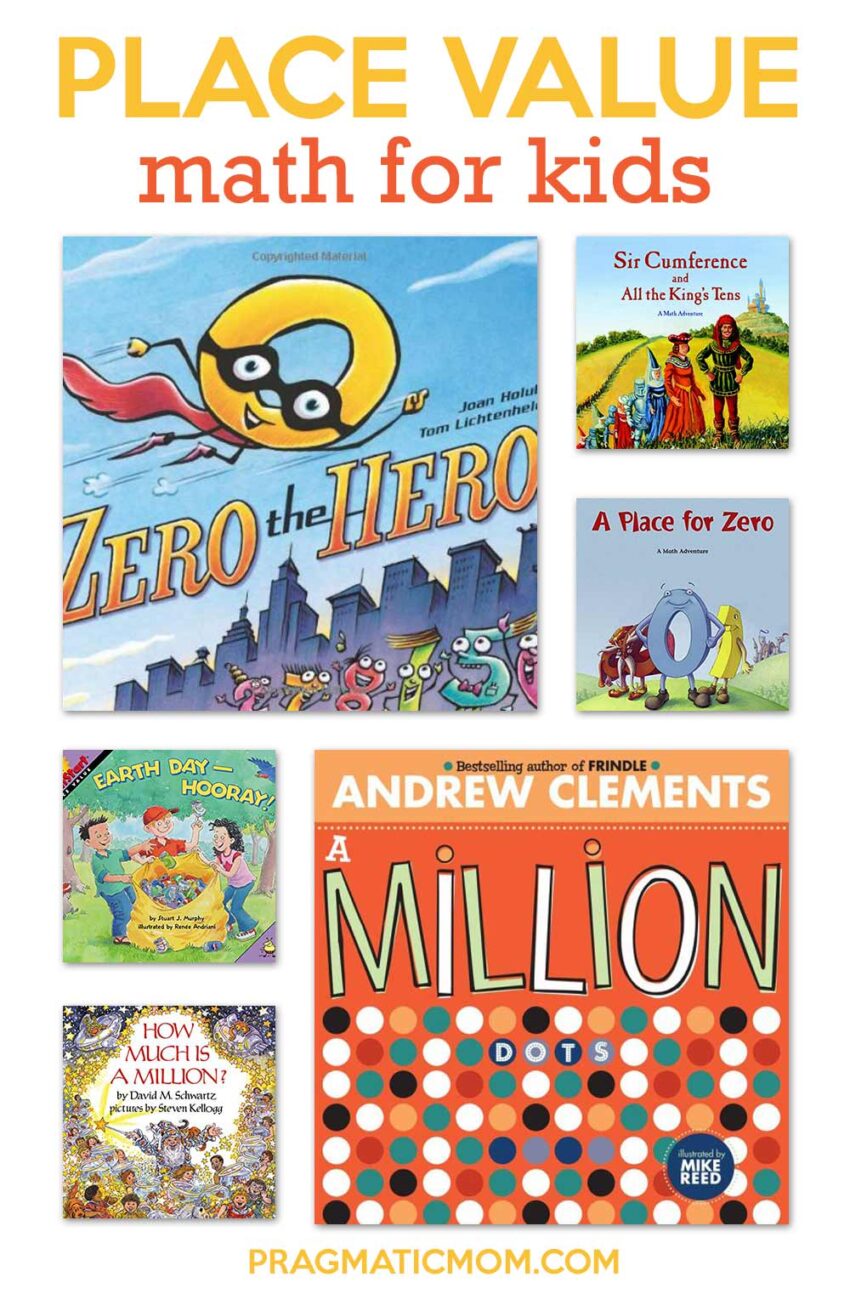 Today, I found a great animated video about place value so I am basing my post around this math concept. I like to use picture books and games to teach kids math concepts. It’s a fun way to get them to get an intuitive sense of math. I have math games here: 70+ Free Educational Games. I also have more math picture books here:

How about you? Do you like math picture books too? What are your favorites? Thanks for sharing!

Sir Cumference and the All the King’s Tens: A Math Adventure by Cindy Neuschwander, illustrated by Wayne Geehan

It’s difficult for Lady Di to count the guests for the king’s surprise birthday party until Sir Cumference figures out to group them into 10 rows of 10, thus making 100. This is a visual representation of place value where a digit’s place tells its value or how much it’s worth. In this story, the tents show the value of the digit’s place with the biggest tent in red representing thousands, the blue tent representing hundreds, the green tent representing tens, and the smallest tent representing ones. [picture book, ages 8 and up]

If Luke, Ryan, and Carly can collect 5,000 cans from cleaning up the park, they can use the money to buy flowers to beautify it as part of their Save The Planet Club. But how to keep track? They tracked by filling small bags with ten and then put 10 bags worth into a big bag that held 100. They haven’t reached 5,000 yet, but a school-wide drive will help. Their counting system worked! This is an Earth Day place value counting book perfect for first and second grade. [picture book, ages 6 and up]

Zero the Hero! by Joan Holub

While this book demonstrates in a humorous way the concept of zero, it also shows place value when Zero stands next to a number, thus putting into the tens category. Without Zero the Hero, the other numbers find severe limitations to what they can represent. Things get dire when the Roman Numbers show up to take the numerals prisoner. It’s time for Zero to show everyone the hero that he really is. This is a really fun picture book to teach kids math concepts! [picture book, ages 6 and up]

This is another version of the role of zero in math in terms of multiplication, addition, place value. Zero lives in Digitaria, a small country of numerals. This is a good book to pair with Zero the Hero but I think Zero the Hero gets the math concepts across in a more visual way and the story is more fun to read. I also like the illustrations better in Zero the Hero.[picture book, ages 6 and up]

How Much is a Million? by David Schwartz

The first page before even the title page shows the place value of a million in this picture book that grapples with exactly how to visualize a number as humongous as a million! David Schwart’s examples are both amusing and illuminating! And then he goes on to describe what a billion and a trillion would be as well! [picture book, ages 4 and up]

A Million Dots by Andrew Clements

Andrew Clements tackles the concept of counting to one million by using dots on a page coupled with illuminating examples of size. For example, he illustrates 24,901 dots as the distance of miles around the Earth at the equator. All his examples add up to one million dots. If you want to contest his count, try counting the dots yourself!

I found this book a little confusing because the factoid example of the page does not align with the dots on that actual page. I would have preferred for the dot count to cumulative which also matches up to the factoid on that page.  [picture book, ages 4 and up] 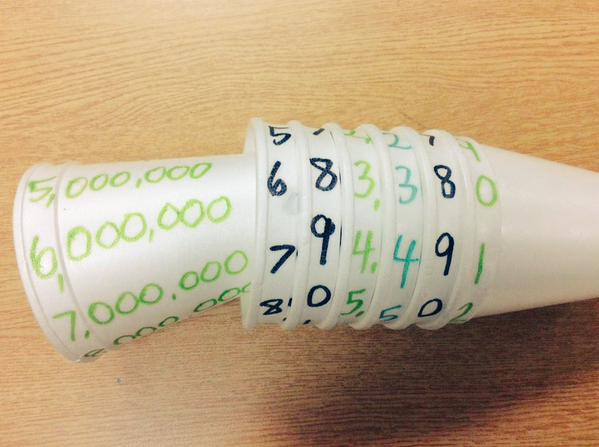 And another version from Imagination Tree:

Here’s a place value song that ties it all together:

This is HarperKids promotional trailer for A Hundred Billion Trillion Stars by Seth Fishman explores them. With illustrations by Isabel Greenberg, the picture book is a delightful dip into the power of numbers and the vast beauty of our planet.

The Mystery of Pi for Pi Day! 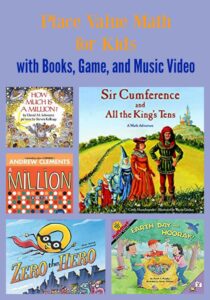