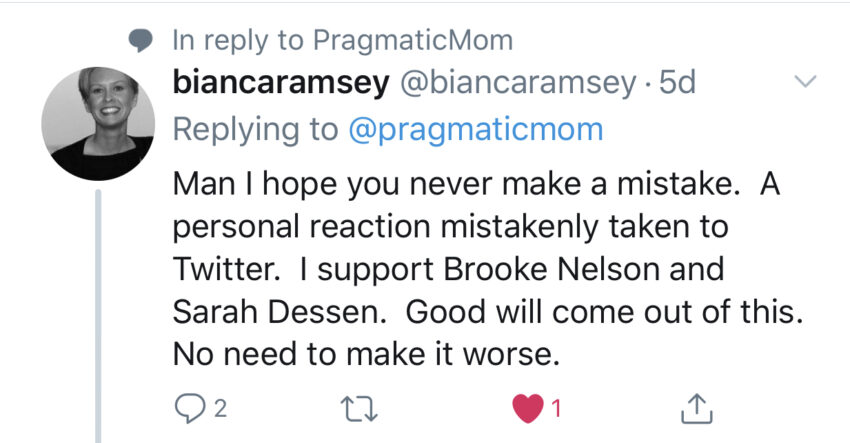 A funny thing happened on Twitter to me this past week. A woman was aggressively calling me out for tweeting about #SarahDessen. It was strange and out of the ordinary how persistent she was, and she seemed to be closely monitoring her Twitter account, replying almost instantly every time I responded.

Some of her tweets had a PR-speak to them; they did not feel authentic. Something was up so I decided to peel away the layers of the onion … to find a shocking reveal.

Here’s what went down…

This is the first tweet she sent to me because of this thread that I posted about how Brooke Nelson should sue Sarah Dessen. 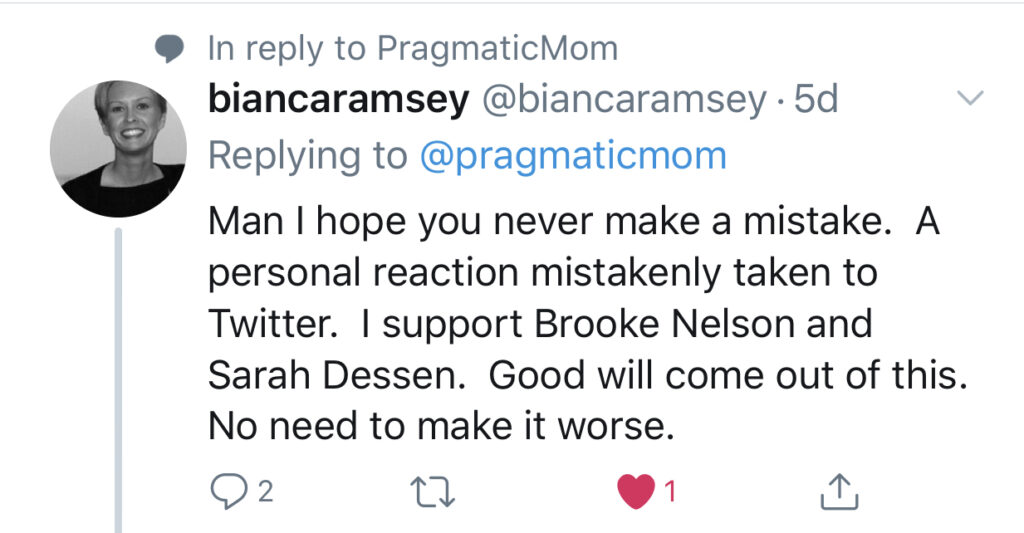 We had some back and forth. She was calling me out as to why I was going after Sarah Dessen. She seemed to want to shut me down. Here are some of her tweets. I will link some of the threads below.

She claims to be non-partisan, but this turns out to be a falsehood.

@biancaramsey
I support Brooke and I support sarah.

@biancaramsey
I understand, I have read your work before. I just think there is more to this than an author purposefully attacking another woman. Big mistakes were made, but Sarah Dessen too has a track record of kindness and support for other women.

Here is when I started to suspect that she had an ulterior motive to shut me down.

You are putting a lot of time into this. I know something bad has happened like this to you, but you seem to be on a mission to hurt sarah back.

I have a long thread back to her here.

I ask her if she’s associated with Penguin, the PR firm, or Sarah Dessen.

@biancaramsey
I am not associated with penguin, I just responded to ginas post which tagged penguin. I am not a writer, I run a non profit that teaches mutually meaningful design to high school kids. We do social justice design and complex solutions to conflicts and disagreements in design.

But then I ask…

And her bombshell reply:

@biancaramsey
She is my best friend.

And now she is exposed, she’s ready to leave Twitter.

@biancaramsey
Me? My name is bianca ramsey. I graduated chapel hill high with sarah in 1988. 19 years ago I was her maid of honor. I love her and will one day live in a old folks home with her god willing!

@biancaramsey
No threat. Twitter is bizarre. As moms I though we could talk. And I thought I was being sincere and nice. I have no twitter following and nothing to gain, i just love my friend.If you would like to talk we could but this twitter thing is stressing me out.

@biancaramsey
She is off of all social media. As I will now be too. I wish you the best.

And now after getting a taste of  A FRACTION of the hate that Brooke Nelson received, she would like to bow out. Of course, she signed up for this.

@biancaramsey
I wish I could talk to you instead of tweeting. I feel for both Brooke Nelson and sarah Dessen. I’m sorry to everyone who ever gets online abuse. Because this little exchange and the messages emails I’m now receiving has been enough to shut me up forever.

My reply here. I go off on her.

One thing that Sarah Dessen doesn’t want people to know is how her PR firm is blocking all posts and stories about her Tweet scandal on Instagram. No doubt, this is a feature that you can pay Instagram to do; they are owned by Facebook now.

The irony is that Instagram’s demographics are teen girls:

Sarah Dessen was faux outraged that Brooke Nelson described her readership as teen girls. But now she wants to block teen girls from learning about her cyberbullying.

My final takeaway is this:

Sarah Dessen, as a professional author, is more than qualified to write her own apology. And it would have been much more sincere than the crap apology that her Crisis PR Firm wrote for her which incensed me (and is why I wrote my initial post).

The cost of a Crisis PR Firm is likely $22,000 a month for their retainer fees. No matter what the fee is, Sarah Dessen could have written her own apology and used the money that she is currently spending on a Crisis PR Firm to donate to Brooke Nelson’s graduate school to help pay for her degree as a token of apology. If she had done that, everyone would have applauded her.

Instead, she pulls this stunt of having her friend try to shut me down. The optics on all her Twitter antics are not favorable and with Black Friday and CyberMonday coming up, this might affect her holiday sales. Because that is the only thing that Team Dessen cares about. Oh that, and her Netflix deals.

Sarah Dessen writes compelling mean girl characters in her books. Could it be that she’s been successfully hiding her mean girl side all along? You do write what you know…

My message to Sarah Dessen: it’s really not that hard or too late to do the right thing. Fire your PR firm. They are incompetent. That apology made everything worse. Your friend coming after me was also a miscalculation. Did your PR firm approve this? Refuse to pay them. Use the money to donate to Brooke Nelson instead. Pay directly to her grad school program on behalf of her tuition. Write your own apology. Own up to what you did. Everything will go away.

It might not be too late to save your Netflix deals because I’m sure they are watching. They’ve had to cancel a bunch of shows and movies due to scandal. They are watching now and calculating, in a game theory kind of way, how much it will cost them if they cancel now or later. It’s never too late to do the right thing.