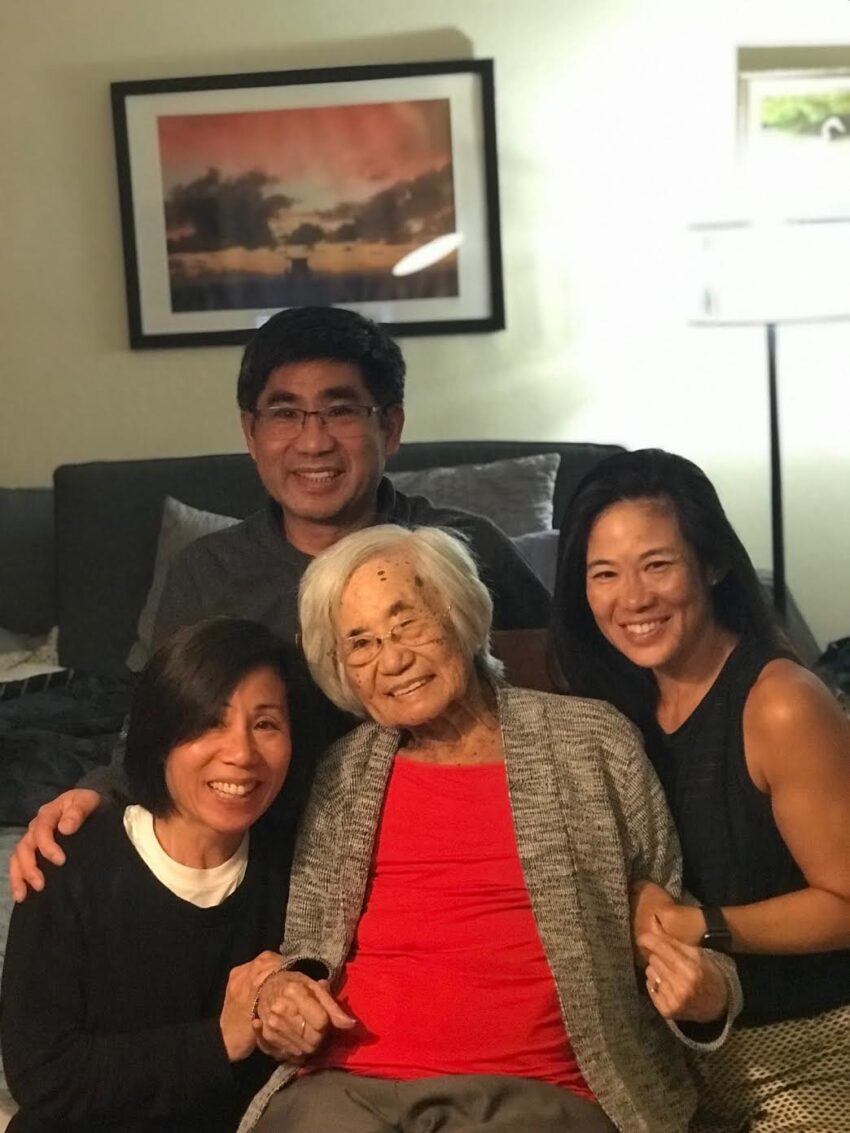 I have nothing but good memories of your mom. I was new to LA in the mid-1950’s and started working for the Air Force on Maple Street and met Rose there; we worked in different departments but on the same floor. I remember having many Friday-after-work Mexican dinners at El Cholo. We even took hula lessons together, went on a bus trip to San Diego once, and took other trips with her brother Art.

To me, what sets Rose apart and what always impressed me most is that, in all the years that I have known her, she never said anything nasty or negative about anyone. I think she lived by the principle that if you cannot say anything nice about someone, it is better left unsaid. It is making me sad again thinking about Rose and what a great person she was. I will never forget her kindness and friendship.

Rose Wenjen, passed away this morning after battling breast cancer for the second time. This cancer was unusual for someone her age; it was very aggressive. But, as we used to joke, it was like our mother was reverse aging. At one point, her hair actually was getting darker on its own.

A little about my mother. She was born in San Francisco’s Japantown, making her an American citizen. Her parents immigrated from Hiroshima and never learned English. She taught Buddhist church school there. Her family was forced to relocate during WWII for being Japanese American. Because we had relatives in a remote part of Utah, they lived in a tent there and worked their family’s farm. It was near the underground site testing nuclear weapons. It was like they could not escape the atomic bomb.

If you ask my mother about that time, she would smile and say that the Mormons would come to visit to convert her so she would have robust conversations about Buddhism versus the Mormon faith. She earned her AA degree at Weber College while in Utah which was nearby. When the war ended, she and her family relocated to Los Angeles. For the first time, Asian Americans could work for the government as Civil Servants and that is what she did. She was a stenographer in the court system and also worked for the U.S. Army JAG corps. With the money she made, though, she purchased a two-family house near LAX for her relatives. Her parents lived on the top floor and her siblings and their relatives lived below. She lived there until she got married. She met our father in Los Angeles and stopped working to raise us children in Seal Beach, CA.

When our father could no longer work from Parkinson’s Disease (he was a math professor at Cal State Long Beach), she went back to work, again as a civil servant at Seal Beach Naval Weapon Station (again where nuclear weapons were rumored to be stored — this time Trident missiles). She also worked in the government program in the 70s to naturalize undocumented people. Her job was front desk receptionist. My mom was the nicest human being. Always smiling. Always kind. Brimming with positive energy. I remember that people gave her small gifts, usually food, for her kindness at the front desk.

My mother also did a stint in real estate and her office was in Little Saigon. We joke that she didn’t sell many houses but she did take many, many people to experience her favorite Vietnamese restaurants there. She would take us to her favorites and we had a lot of great Pho and 7 Courses of Beef with her.

We will remember her always for her belief in the health benefits of Forever Living Aloe Vera Products and Nikken healing magnets. I was always skeptical, but she’s made me a believer. Many will remember her for her hospitality. She would always offer anyone in her house tea and cookies and that included my sister’s piano students as she taught out of the Seal Beach house.

She was active in the International Friendship Club in Seal Beach, actively recruiting everyone that she knew. I remember her talking to people waiting at baggage claim after a flight together and her telling them about the club and encouraging them to join. She helped open a Sister City in Todos Santos in Mexico and did charity work to help support the community there.

She also was active in the Seal Beach Garden Club. She loved flowers, and gardening and turned her yard, front and back, into a Japanese garden oasis.

She loved to travel. Perhaps her only regret was not traveling more, but she lived in Taiwan for a year when our father was a professor on exchange for a Fullbright Fellowship. She traveled throughout China and Japan. She visited Thailand, Belgium, France, Spain, and Austria. She painted in Hawaii and Italy. She took a cruise to Alaska and drove across Canada (twice!).

She died like she lived. She never complained about her health or being in pain. In fact, if you ask her, she’s never been sick a day in her life.

We will remember her legacy which lives on in us, her three children, and her six grandchildren. She had the gift of creativity and was a talented artist. She had formidable strength in keeping a positive mental attitude. Her glass was always half full. She was a gentle hand as a parent — no Tiger parent here. She always supported our endeavors, even signing her house as a guarantor for my business start-up.

She died about a week shy of her 96th birthday. She had a long and beautiful life and we are grateful for our time with her.

There will be remembrance services the week of Christmas vacation in Torrance, CA. For anyone interested, please email me at pragmaticmomblog@gmail.com to be notified. My mom never wanted to bother anyone or take grandchildren out of school. Education was a big thing for her. So she will approve of services at year-end. A display of her artwork will be at the reception following and she would be honored if you would take a painting that you like to remember her. 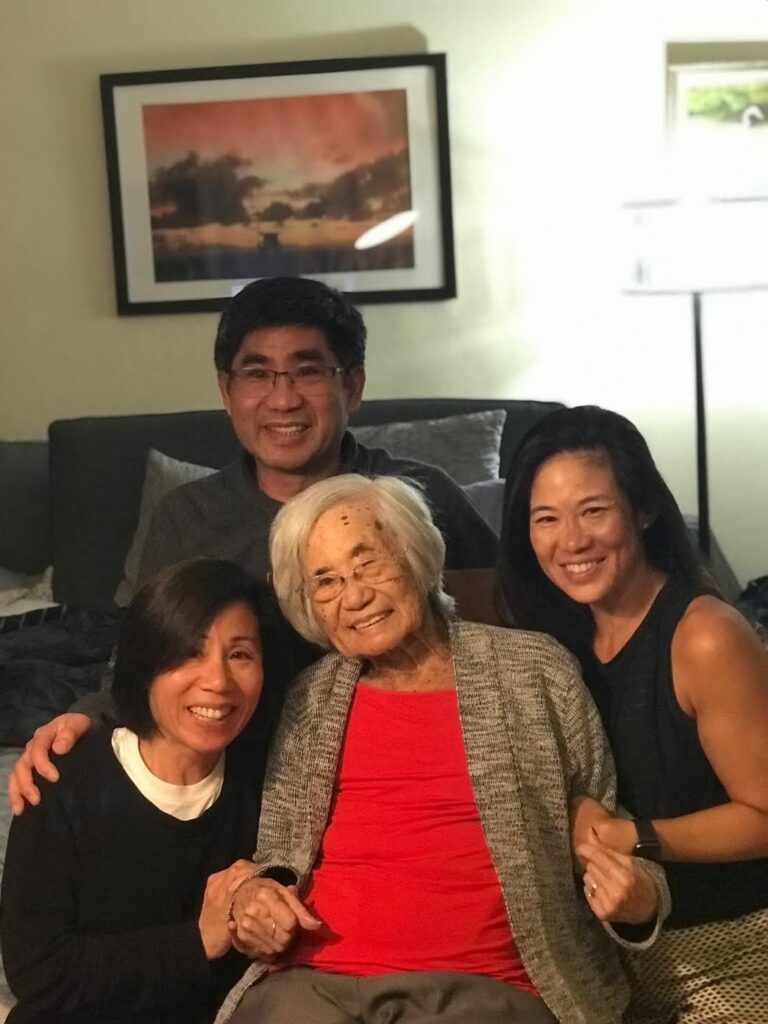 Our Japanese Daimyo family crest. It’s from the Sakai clan. 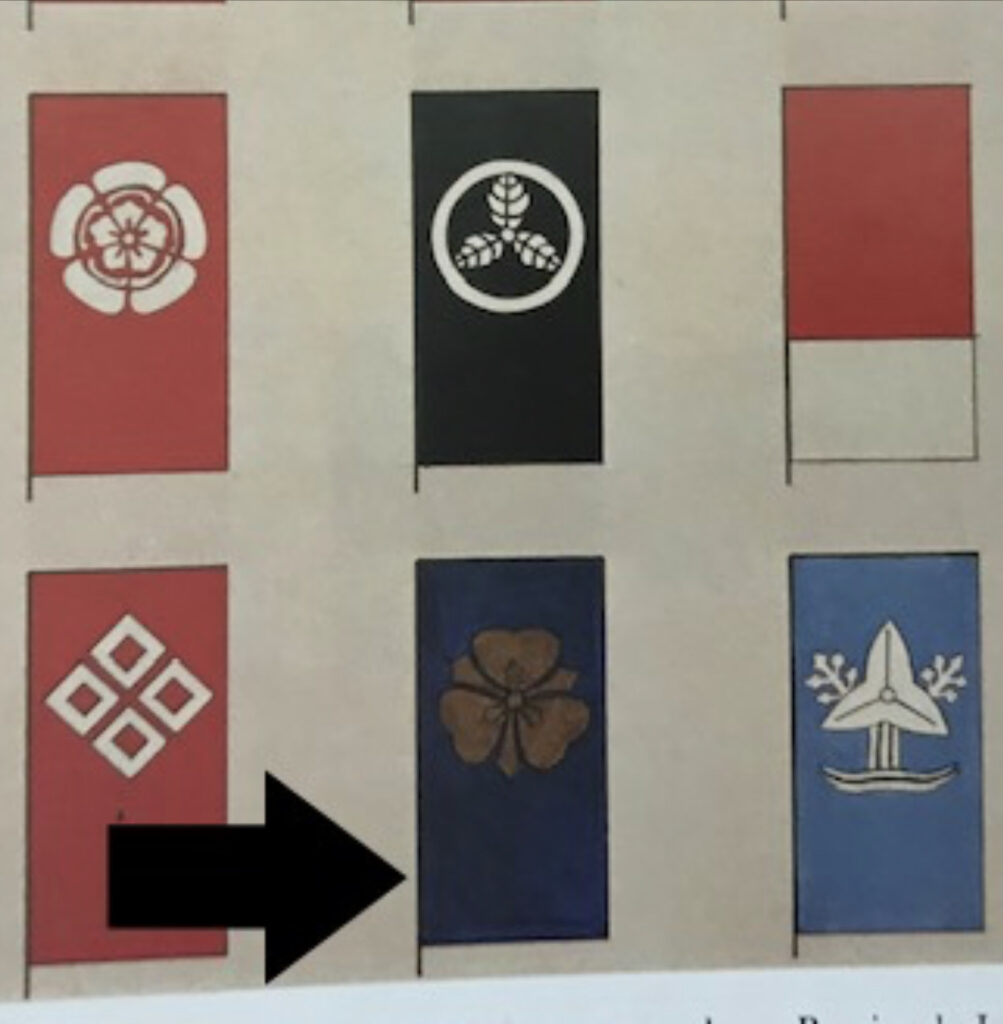 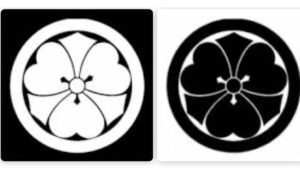 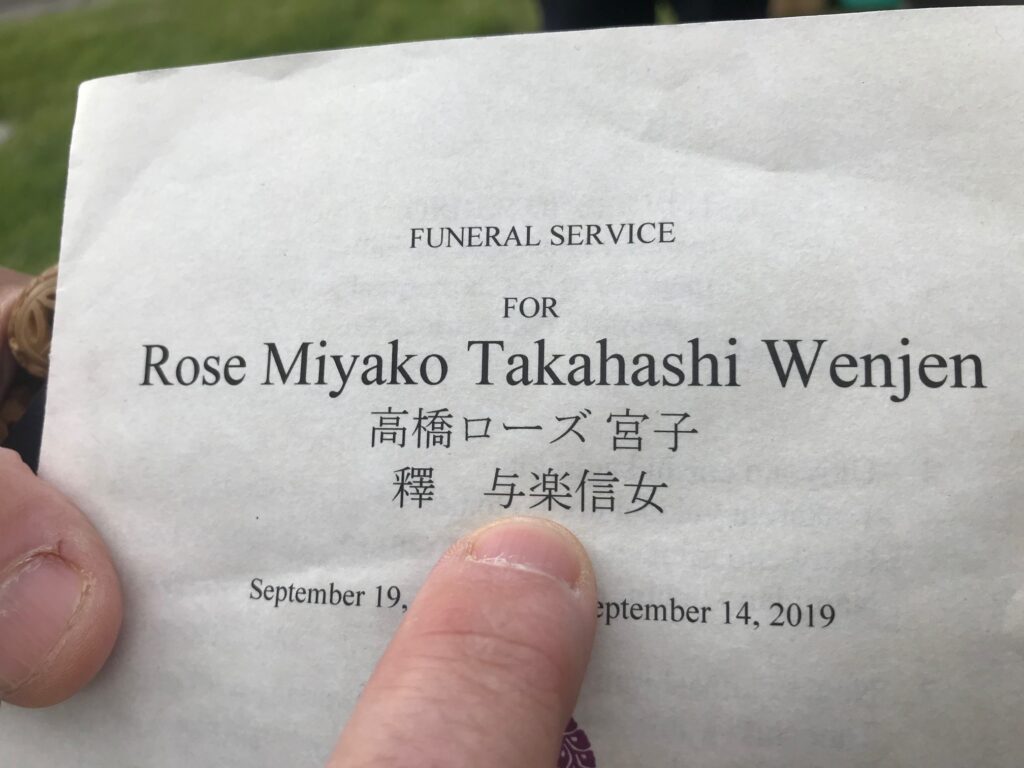 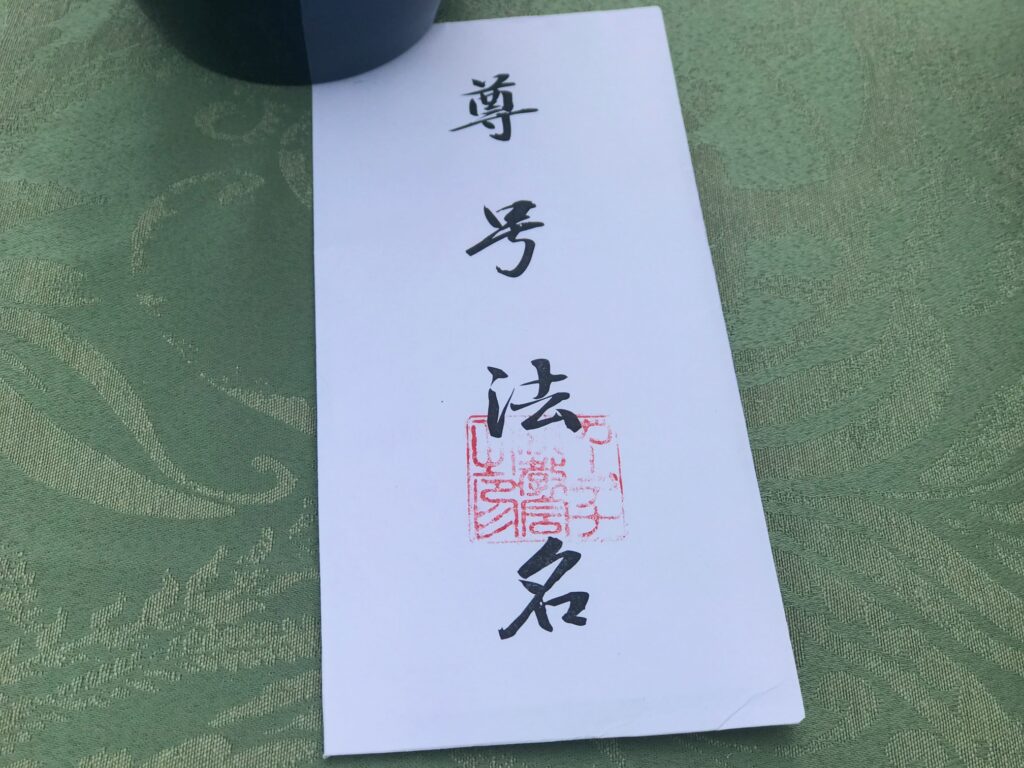 For genealogy purposes, here are her parents. Note that we (and all your cousins) have the 400- year-old family tree from our relatives in Hiroshima. The Japanese government no longer releases a family tree prior to the Meiji Restoration which is about 150 years ago because they want to de-emphasize feudal samurai Japan.

Rose Wenjen’s father, Tsutau Frank Takahashi, died pretty young when they were living in San Francisco. He was a history teacher in Japan. He built and flew a propeller plane while living there. There’s a photograph of that somewhere. Her mother remarried and Rose lived with her stepfather, Takeo Sasaki, and mother, Chitose Sasaki, when in Los Angeles. He seemed like a good man. I met him a few times. Chitose and Takeo Sasaki, your great grandparents, are buried in Boyle Heights, Los Angeles.

Rose was the middle child of five children. The oldest, a girl, died pretty young. I think around 3 years old or so? Her older brother is believed to have died from drowning in his late teens or early 20’s. Rose and her family used to walk across the San Franciso bridge as a family outing. Her oldest brother would run ahead and have a homemade baked pie waiting for them when they returned. He was a strong swimmer and swam in the SF bay often. My mother believed that he had a heart attack while swimming in the bay. I think he died before they were forced to relocate to Utah during WWII. Her younger sister, the baby of the family, is Florence. 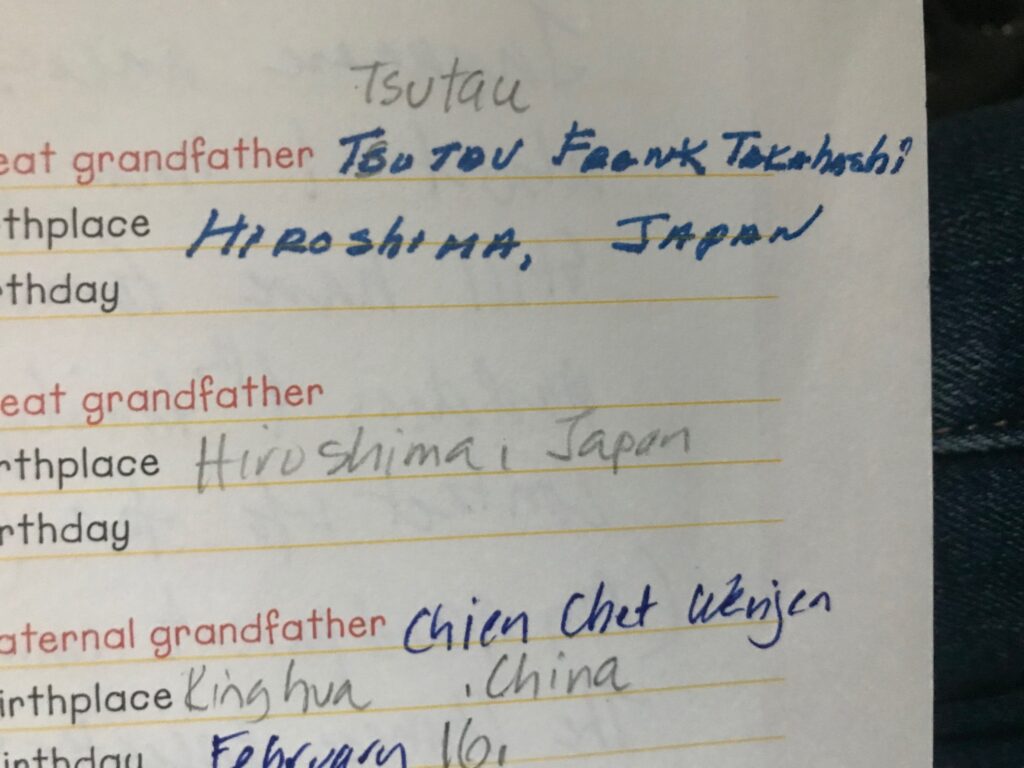 From the Sun News.

Seal Beach resident Rose Wenjen passed away on Sept. 15, after battling breast cancer for the second time. It was just one of many challenges Rose faced in her life, each time she persevered and succeeded.

Rose was born in San Francisco in the neighborhood known as Japantown. Her parents had immigrated from Hiroshima and never learned to speak English. Yet, Rose would go on to teach Buddhist Sunday School in the neighborhood. World War II would intervene and Rose and her family, like other Japanese Americans, were forced into internment camps. Because they had relatives in a remote part of Utah, they were sent to camp in Utah.

The camp was near a site where underground nuclear testing had been done.

“It was like they could not escape the atomic bomb,” her daughter Mia said.

Again, Rose made the best of the situation. She was able to eventually enroll in Weber College in Utah and earn an AA Degree. After the war, her family relocated to Los Angeles, where she would go to work as a court stenographer.

“For the first time, Asian Americans could work for the government as Civil Servants and that is what she did,” Mia said.

She met her husband in Los Angeles and they relocated to Seal Beach. She would eventually quit work to raise their children. However, with the money she had earned she was able to purchase a house near LAX, where her parents, her siblings and their family lived. As an American-born citizen, Rose had rights to own property that Japanese American immigrants did not have at the time.

Rose raised her children in Seal Beach and became integrated in the community. She was a volunteer with the Seal Beach Friendship Club and helped coordinate a sister-city partnership with Todos Santos, Mexico. The club raised money to help children in that city.

Her husband was a math professor at Cal State Long Beach. When he was forced to stop working due to Parkinson’s disease, Rose again went back to work, this time at the Naval Weapons Station Seal Beach.

Rose died just a week short of her 96th birthday after a full and beautiful life. Despite obstacles and challenges placed before her, Rose always moved forward and made the most of what she accomplished.

“She will be remembered for her unfailing optimism, her kindness, and her generosity of spirit,” Mia said.

She is survived by her three children, their spouses, and six grandchildren. They are:

China for Kids with Children’s Books, Culture and Design

13 thoughts on “My mother, Rose Wenjen, passed away today…”