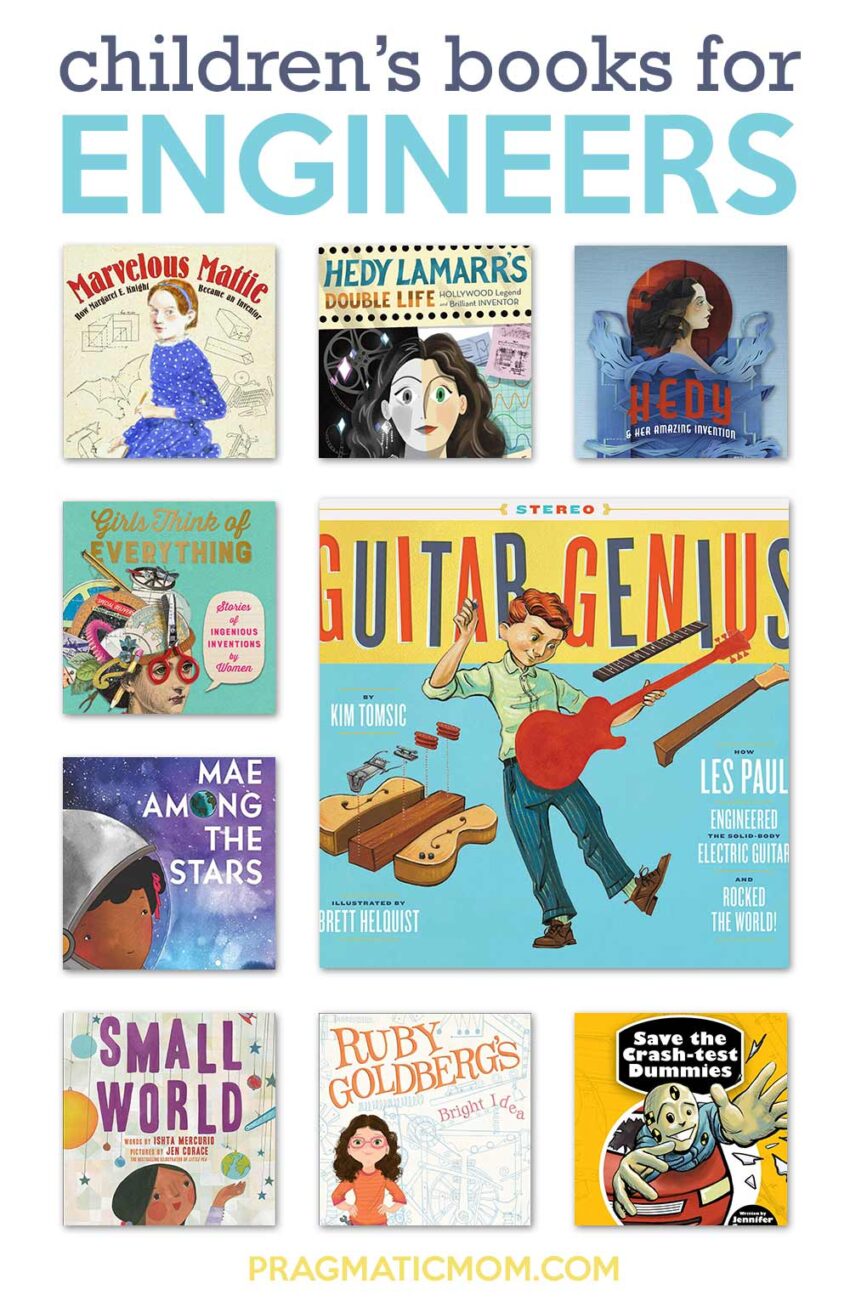 My son’s favorite class in middle school was Ed-Tech, an engineering class. He thought it was fun to invent things to solve problems. That’s what engineering is … designing and building machines and structures including bridges, roads, vehicles, and buildings. It’s often to solve a practical problem or improve on a machine that already exists. Engineering is for creative problem solvers!

And while it seems like boys gravitate towards engineering more than girls, this list is proof that girls are great engineers!

What books am I missing? Thanks for your suggestions!

p.s. This list was inspired by my fellow New in ’19 author, Kim Tomsic, who wrote Guitar Genius: How Les Paul Engineered the Solid-Body Electric Guitar and Rocked the World. We all have debut picture books out in 2019.

Mattie was an inventor since she was very young, creating toys for her brothers and a foot warmer for her mother. Her first commercial success was a fast sled that she sold to her brother’s friends. When her mother moved the family to work in a textile mill, Mattie befriended the machine shop manager, Mr. Baldwin. To prevent thread shuttlecocks from injuring the workers, Mattie invented a metal guard which was widely used. Mr. Baldwin taught her about patents.

Working at a paper bag factory, Mattie got the idea to create a better machine that would make a square-bottomed bag that would not tip over. She worked on her invention for two years, until it worked perfectly. Many of the paper bags we use today are still being processed by Mattie’s invention. [picture book biography, ages 6 and up]

Not many knew that glamorous Hollywood actress Hedy Lamarr was also a closet engineer who developed a groundbreaking communications system to secure the U.S. navy’s torpedo guidance system using ‘frequency-hopping,’. This technology is still used today. [picture book, ages 5 and up]

Hedy was gifted with beauty, brains, and performing arts talent. As a child, she could portray all the adults around her just by the way she walked. She was talented at the piano like her mother but didn’t like t practice. Her active mind preferred to problem solve creating new inventions. She escaped a confining marriage by running away to America where she became a Hollywood star but still she did not stop inventing. During WWII, Hedy worried about her mother back in Vienna. With composer George Antheil, they developed an idea of “frequency hopping.” By changing a radio signal frequently, it becomes impossible to track. She knew this technology could be applied to stop Nazi submarines from attacking British ships by not keeping their radio-controlled torpedoes from being jammed by the Germans. Hedy filed a patent for this technology and it is used still today in many different applications including cell phones, Wi-Fi and Bluetooth. Pair this with Hedy Lamarr’s Double Life for a more in-depth look at Hedy Lamarr’s secret life as an inventor. [chapter book, ages 7 and up]

Music propelled Lester Paul into engineering. He started with building a crystal radio set, and then engineered his own recording device for his music. Taking things apart was how he taught himself. When he found that his guitar wasn’t loud enough for his performances, he engineered a speaker with a microphone. This eventually led to his creation of the solid-body electric guitar. His inventions changed the landscape of music. An accomplished musician inducted into the Grammy Hall of Fame and the Rock & Roll of Fame, Les persevered even after his first music teacher told him not to return for lessons because he had no musical talent. [picture book, ages 5 and up]

Mae Jemison is the first African-American woman to travel in space. In addition to being an astronaut, Mae was an engineer, physician and NASA astronaut, and volunteer in the Peace Corps. She faced racism and sexism but never let it deter her from her dreams. As an astronaut, she conducted experiments in space. The Earth We Share is a science camp for kids ages 12 to 16 that Mae launched. Mae returned to NASA for a special project to develop the first starship in 2011. [early chapter book biography, ages 8 and up]

Girls Think of Everything: Stories of Ingenious Inventions by Women by Catherine Thimmesh, illustrated by Melissa Sweet

Save the Crash-test Dummies by Jennifer Swanson, illustrated by TeMika Grooms

Take a front seat into the world of car safety engineering. If it weren’t for the experiments on cars using crash-test dummies, our cars would not be as safe as they are today. Jennifer Swanson takes us through the timeline of cars and the safety features that have developed through the decades to protect drivers and passengers. [nonfiction chapter book, ages 8 and up]

Jabari is back and this time he’s making a flying machine but he wants to do this by himself. His sister, Nita, wants to help and his dad persuades him to take on a partner. It’s not easy and Jabari gets frustrated but in the end, he preserves. It’s great to see Jabari demonstrate the design process of an engineering project! The illustrations are a visual treat in this beautifully designed book. [picture book, ages 4 and up]

It’s a small world when you view the earth from the vantage point of another planet. Ishta Mercurio writes in lyrical prose of this journey of the world of Nanda as a baby that starts of small and cozy, but with nurturing, grows larger and larger. As Nanda explores the world around her, she discovers her love of science and physics. Her STEM passion catapults her to her career as an astronaut blasting off into space It’s from here that she can look back at her blue planet and realize what a small and interconnected world we live in. [picture book, ages 4 and up]

Ruby Goldberg was named after Rube Goldberg and a little mishap when she was born. For the science fair this year, she’s decided to join forces with her arch-rival, Dominic. In working together, and paying attention to the people in her life instead of being so focused on her science experiments, Ruby learns that collaboration is also important for science. [chapter book, ages 8 and up] 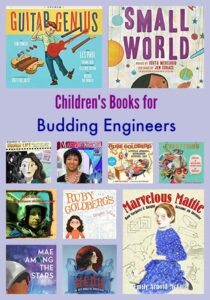 Books for Kids Who Admire Astronauts

10 Books to Encourage of Love of Science in Babies/Toddlers

Baltimore the Snowy Owl and Owl Books for Kids

Why Do Chameleons Turn Colors?

Books for Kids with Science Concepts

Books for Kids on the Math of Spirals