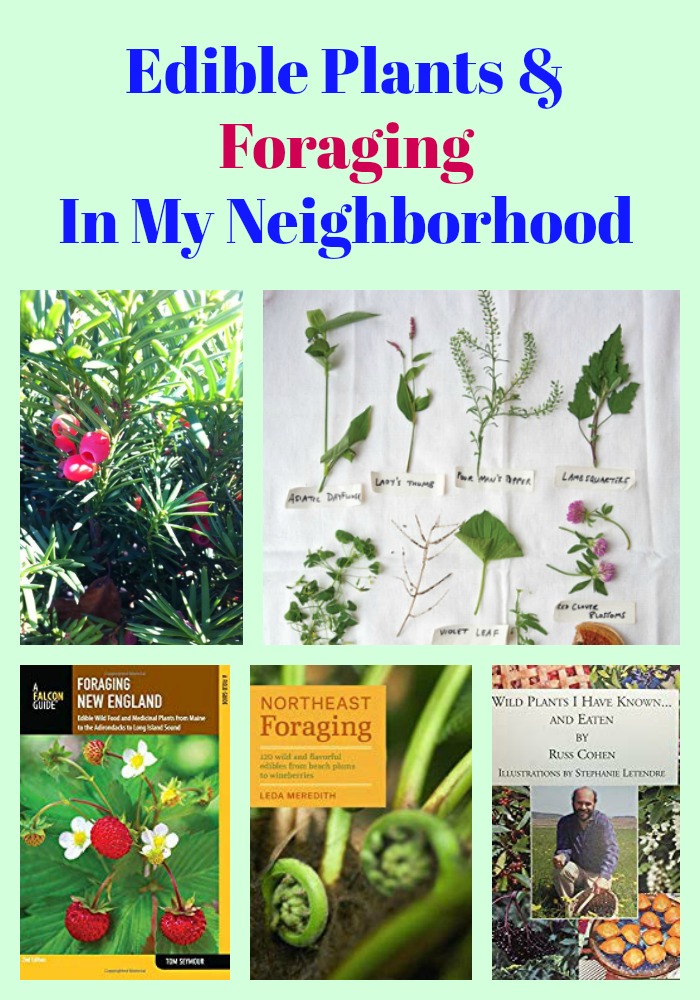 Foraging for edible plants and berries is not the first thing that comes to mind when you live in a suburban city near Boston. At least, that is where I found all these specimens. Yet, the foraging is abundant at schoolyards, dog parks, and soccer fields.

My family and I took a class with Russ Cohen, author of Wild Plants I Have Known… and Eaten where we walked around an aqueduct learning about edible plants that flourish in our parks and yards. He’s a pretty interesting guy:

Since his retirement in June 2015, while continuing to offer walks and talks on foraging for wild edibles, Russ is now playing the role of Johnny Appleseed for native edible species. He has set up a nursery (near his childhood home in Weston, MA) where he is growing over 1,000 plants, representing more than a third of the more than 170 species native to New England ecoregions that are edible by people. Many of these plants were propagated from seed Russ gathered himself. Russ is then forming partnerships with land trusts, municipalities, state and federal agencies, schools and colleges, tribal groups and others, to plant plants from his nursery on appropriate places on their properties.

This is our experience foraging with him. I didn’t identify the plants that he showed us. They are all in his book. A few of the plants are below as well where I found them closer to where I live.

I am an amateur and I read the books below then found plants I thought looked familiar while walking my dog at dog parks and at soccer fields.

I don’t know too much about mushrooms and would strongly recommend AGAINST gathering wild mushrooms unless you are an expert.

p.s. It was this article in Saveur Magazine that got me interested in foraging. The author, Ava Chin, uses foraging as way of coping with grief. What a wonderfully positive way to remember her grandmother! The plants below were collected by Ava from Brooklyn’s Prospect Park.

These are the plants that I found where I live near Boston.

I think it’s a Serviceberry. The berries resemble long-stemmed blueberries.

This Echinacea plant is growing in front of my kids’ elementary school. It’s a common flower grown in gardens. Some species are used in herbal medicines and some are cultivated in gardens for their showy flowers.

My dog ate these berries when he was a puppy playing at the dog park. I realize now that it is Smooth Sumac berries which the Native Americans used to make a refreshing drink.

I think this is Pokeweed. The young shoots and leafy tips can be cooked as a kind of asparagus like a vegetable. The root, seeds, and mature stems and leaves are dangerously POISONOUS!! I’d stay away from this one!

These Milkweed pods growing in front of my kids’ elementary school will soon release the seeds that float in the wind. When the pods are very young, they are edible as a cooked vegetable.

The Pineapple Weed that I found resembles Chamomile, a relative which is used to make tea. Pineapple Weed can also be used for colds and to aid relaxation. It’s has a pineapple scent and a slight pineapple flavor.

These are Crabapple trees. The crabapples are sour (my kids and I tried them) but they are supposed to be great cooked as applesauce.

Juniper berries (the same ones found in the spice aisle) were growing at Weeks Field along the perimeter.

I think this is Chickory. It’s growing in front of my kids’ elementary school. It’s used as a field green and the root can be roasted and used as a substitute for coffee.

I see Yew berries everywhere in front yards since Yew is commonly used as hedging. The berry is edible but the seed is poisonous. This picture was taken in Newton Centre in the main garden area near the parking lots.

The Kousa Dogwood has edible fruits and is a common ornamental tree. I found one at Hamilton Field but also at a friend’s front yard.

p.p.s. Here are other foraging books that I own and like:

To examine any book more closely, please click on image of book. 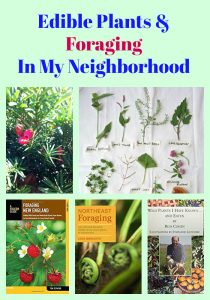