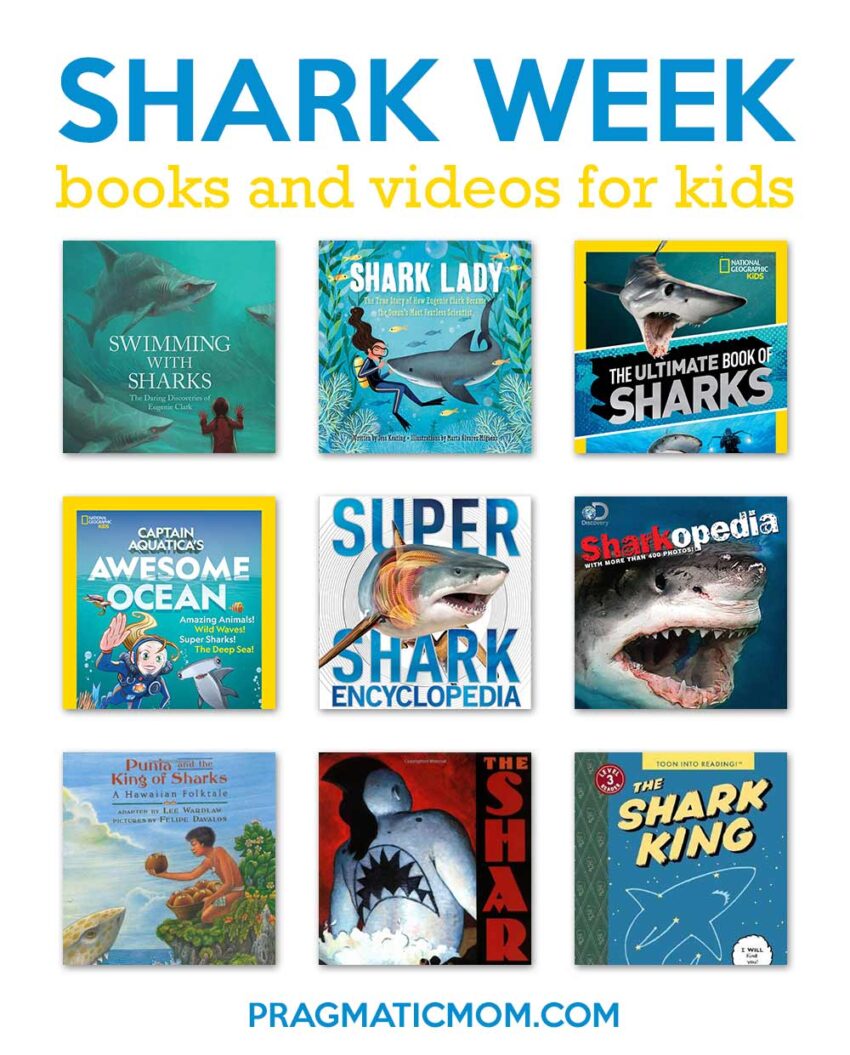 My middle daughter, PickyKidPix, became terrified of sharks after indulging in too many Shark Week TV shows. It’s easy to get a skewed impression of sharks so let’s use children’s books to learn about sharks before Shark Week begins on July 17th!

Let’s start Shark Week off with some facts about sharks, shed by the first scientist to study sharks, Dr. Eugenie Clark!

The truth is, despite their fearsome reputations, humans are much more dangerous to shards than they are to us. Every year, humans kill more than 100 million sharks. It’s important to treat sharks with respect, but there is no need to fear them.

From Shark Lady: The True Story of How Eugenie Clark Became the Ocean’s Most Fearless Scientist by Jess Keating, illustrated by Marta Alvarez Miguens

It’s one of those coincidences in children’s book publishing that there were no books on Eugenie Clark and then two picture book biographies were published in the same year! Both are excellent and show different details of her life.

Swimming With Sharks: The Daring Discoveries of Eugenie Clark by Heather Lang, illustrated by Jordi Solano

Eugenie Clark became the first scientist to study sharks in their natural habitat, an amazing achievement given the discrimination she faced as a woman in a field dominated by men. Her research shed new light on sharks showing that they were intelligent creatures and not voracious killers. [picture book biography, ages 5 and up]

Shark Lady: the True Story of How Eugenie Clark Became the Ocean’s Most Fearless Scientist by Jess Keating, illustrated by Marta Alvarez Miguens

Eugenie was fascinated by sharks and marine life at a young age. Her mother gave her an aquarium which became her laboratory and sanctuary. As a young scientist upon graduation from graduate university, Eugenie discovered three new species on a research trip in the Red Seas. She was also finally able to study sharks in their natural habitat. A timeline at the end of the book details her achievements. [picture book biography, ages 4 and up]

The Ultimate Book of Sharks from National Geographic Kids

This Kid Reviews Books has a great review:

I am doing a science fair project about how fast different sharks swim and this book helped a lot with understanding sharks. The book has a lot of facts about different types of sharks (even names the fastest sharks), where they live, the parts of a shark, shark trivia, environments, and a lot more. I like that there is an index in the back so you can look up things quickly. The pictures are awesome and I thought it was easy to read and understand. I like how the words are broken up into little sections with pictures for each section.

I learned about types of sharks I never heard of before – like cat sharks and tasseled wobbegongs (that is a real name) and also other facts like there are sharks that actually live up near the Arctic Circle (I always thought they lived in warm waters). This book would be great for schools to have. I think a lot of kids will like it. I thought this was a great book and it really helped me with my project.

“Don’t be fooled by the cartoon cover on this Science Superheroes volume about the ocean– this book is jam-packed with tons of information! Each chapter does start out with a brief graphic novel style adventure for Captain Aquatica and Finn, her hammerhead shark, but then continues with a thorough explanation of the topic, well-illustrated with National Geographic’s usual fantastic photographs. The chapters cover information about waves and weather, underneath the surface, ocean engineers, animals, and sharks. I especially liked the chapters about underwater technology and saving the ocean. The page layout is exactly what I look for when investigating nonfiction for my students– there are bold paragraph headings, pictures with information, sidebars, insets with additional information, maps, and timelines. There is also a glossary, very complete index, and a list of resources. The text is interesting and supported by these items.” [nonfiction, ages 8 and up]

Super Shark Encyclopedia and Other Creatures of the Deep by DK

It’s not surprising that Hawaii would have folktales featuring sharks as gods, both benevolent and to be feared!

Punia and the King of Sharks: A Hawaiian Folktale adapted by Lee Wardlaw, illustrated by Felipe Davalos

The Shark God by Rafe Martin, illustrated by David Shannon

The Hawaiian Shark God is featured again in this story about a cruel king who wants to punish children for a small transgression. In this story, the Shark God is benevolent, helping the children escape from execution. [picture book, ages 4 and up]

In this Hawaiian folktale, a maiden falls in love with a man who saved her from a shark and they get married and have a little boy but he is not who she thinks he is. Her husband is, in fact, the Shark God, and plans to take their son to the bottom of the ocean. It’s a little sad to me though that the mother has lost both her husband and son but many of the Hawaiian myths have bittersweet endings. [graphic novel, ages 4 and up]

The Bull Shark (Dragged From Under #1) by Joseph Monninger

“Barn Whimbril has moved to Florida with his mother after the death of his father in the military so that they can be near her sister. He is very interested in sharks and has read extensively on the topic. He also gets alerts on his phone when there are shark attacks. Unfortunately, there is an attack in a nearby canal that results in the death of a teenager. Barn and his friends Finn and Margaret start to investigate why sharks might be attracted to that particular stretch of the canal and befriend a resident, Grandpa Lemon, who lives nearby. The neighbors in the area are in favor of using dynamite or possibly electric shock to take care of the sharks, even if it is illegal, so Barn wants to make sure that the sharks are not harmed. He has an ally in Jessup Sabine, a scientist who is looking into the matter as well. Sabine is impressed with Barn’s hypotheses, and the two do some investigating. Barn’s biggest breakthrough is finding out that a local restaurant has employees that dump food scraps into the canal for fun, and the fact that there are solar panels nearby also attracts the sharks. Will Barn be able to prove that this is the reason that sharks are entering the canal before another tragedy befalls the area?” [middle grade, ages 8 and up]

Can you spot the seal? These images may explain why sharks mistake swimmers and surfers for their intended prey

Soul Surfer: A True Story of Faith, Family, and Fighting to Get Back on the Board by Bethany Hamilton, Rick Bundschuh, and Sheryl Berk

Bethany Hamilton’s story of surviving a Great White Shark attack is one of faith, love of surfing, and determination. While she still has occasional nightmares of being attacked by a shark, she uses her platform to inspire others to reach for their dreams. Her professional career seemed out of reach after her accident, but Bethany proves that the mind and spirit can overcome any obstacles. [autobiography, ages 8 and up]

Shark vs. Train by Chris Barton, illustrated by Tom Lichtenheld

It’s an unlikely face-off of shark versus train. Who will win? It depends on the circumstances! Who is the best at roasting marshmallows, playing piano, or sword fighting on a tightrope? This is the type of debate boys have! Who will you root for? Use this delightful and funny picture book to see sharks in a whole new light! [picture book, ages 4 and up]

Encyclopedia Prehistorica: Sharks and Other Sea Monsters by Robert Sabuda and Matthew Reinhart

No one does pop up books better than Robert Sabuda! Filled with facts and pop up surprises, Encyclopedia Prehistorica: Sharks and Other Sea Monsters explores the wonders of the ocean! [pop up nonfiction book, ages 5 and up]

The world’s shark population is in trouble for a sad, simple reason: shark fin soup. And although it’s illegal, poachers have been targeting Florida’s biannual migration of blacktip sharks.

Marine biologist Doc Ford needs some assistance protecting the sharks and enlists the help of three kids―Luke, Maribel and Sabina. Luke is brand-new to Florida from the Midwest; sisters Maribel and Sabina have only recently arrived from Cuba―and all three feel like fish out of water. It’s going to take some convincing for them to work as a team and to recognize in themselves the courage, wisdom and tenacity that Doc sees in them.

Together they form Sharks, Inc. and are given an important assignment: to set out each day on their small fishing boat in hopes of tagging sharks for Doc’s research―and to stay away―far away―from any possible poachers in the area.

The trio certainly isn’t looking for trouble, but when they come face to face with danger, survival requires them to rely on each of their own unique gifts, and especially on one another.

” I always enjoy stories with an environmental message, and there are many interesting scientific details about the animals off the Florida coast. I also like to see children doing things. Mysteries are a popular genre in my library, and it’s nice to have characters with a Cuban background. The author is from Ashland, Ohio (home of Grandpa’s Cheese Barn!), which would explain Luke’s background. ” [middle grade, ages 8 and up]

Shocking Shark Videos That Turn What We Know Upside Down!

Nature is surprising. Here’s is a twist on predator versus prey. Great White Sharks hunt seals for prey, but it also appears that seals hunt sharks!

I hope you enjoyed our children’s book list for Shark Week!

Will Jellyfish Take Over the Oceans? 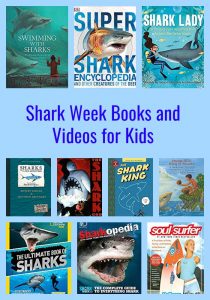 1 thought on “Shark Week Books and Videos for Kids”