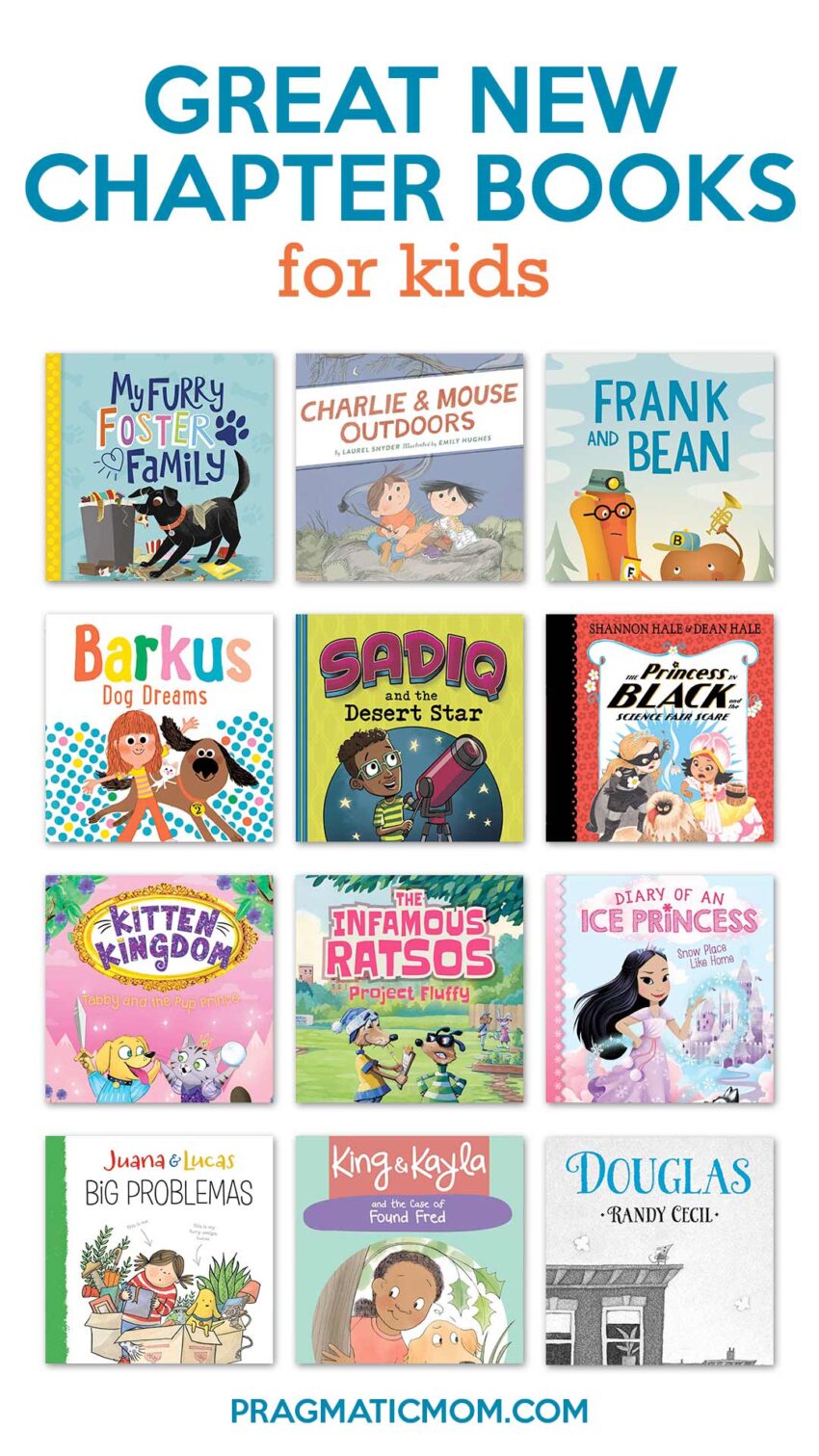 Debbi Michiko Florence brings diversity and animal rescue to life in her newest early chapter book series, My Furry Foster Family! I’m happy that there are other diverse voices on this list as well as other great chapter books to get kids reading!

To kick off summer reading, I’m giving away four ARCs (Advanced Release Copy) books. Please fill out the Rafflecopter at the bottom to enter.

How about you and your kids? What are some favorite chapter books that you recommend? Thanks for sharing!

Kaita Takano and her family foster pets as well as takes care of their dog Ollie, a dachshund, who is also a rescue. They have their hands full with Truman, a black lab with destructive tendencies. When it’s time to find Truman a forever home, it’s hard to let go.

This is an endearing series about pet rescue. My only criticism is the portrayal of the Takano family whose very large and round eyes and skin tone look more Latino than Japanese. An Asian illustrator might be more cognizant and nuanced about portraying a Japanese family more accurately. [early chapter book, ages 5 and up]

I think that this is the closest early chapter book series to Frog and Toad. It has the same innocense and charm. Charlie and Mouse are brothers (Mouse is the younger sibling) and they have these gentle, adult-supervised small adventures that are more like small treasured moments of a parent looking back in time at old VHS recordings of their children when they were young. This particular book has a camping theme. I’m a huge fan! [early chapter book series, ages 5 and up]

Frank and Bean by Jamie Michalak, illustrated by Bob Kolar

Frank and Bean have polar opposite personalities and that sets up the humor in this delightful early chapter book series. Frank is a cautious and careful planner. Bean is more freewheeling and LOUD! One is an introvert; the other an extrovert. Obviously, they are destined to become best friends. Pair with Charlie & Mouse Outdoors for two takes on camping!  [early chapter book series, ages 5 and up]

There are a lot of children’s books about dogs that feel anthropomorphic but I love it when an author nails a dog’s personality like the Harry the Dirty Dog picture book series, and this series has the same “inside the head of an actual dog” feeling. Barkus has gentle adventures that a dog would relate to. And kids will delight in Barkus’s escapades too! [early chapter book series, ages 5 and up]

Sadiq and the Desert Star by Siman Nuurali, illustrated by Anjan Sarkar

Sadiq is from Somalia but that’s not the point of the story. This is a STEM story about Sadiq and his friends who learn about astronomy at school and visit an observatory. Their fascination motivates them to raise money to build a telescope of their own to find the desert star that Sadiq’s father describes as well as try to see Mars. Can a telescope built of paper towel tubes be powerful enough to see the moon and stars? Somali words are sprinkled throughout the book and the DIY telescope project is also included at the end. [early chapter book, ages 5 and up]

The Princess in Black and the Science Fair Scare by Shannon Hale and Dean Hale, illustrated by LeUyen Pham

There’s an appealing goofiness to the Princess in Black and her adventures. Her friends might fumble around as they presto-change into superheroes and the villains are not too scary. The Science Fair Scare is no exception. I like the STEM thrown into the mix. This series sends a great message of girl power, gentle adventures, and STEM that to model for girls that princesses can also be the heroines of their own superpower STEM adventures. [early chapter book, ages 5 and up]

Kitten Kingdom: Tabby and the Pup Prince by Mia Bell

This new series is The Princess in Black + Anthropomorphic Kitten Siblings. It’s a cute series featuring anthropomorphic animals. The royal kittens dress up in disguise as they solve mysteries and retrieve a valuable magical object from the evil King Gorgonzola (a rat, of course), while peace between the dog and cat kingdom is being negotiated. Mia Bell uses clever puns to riff off the animals in her names which adds to the fun. I can see this being popular with the set that also loves The Rainbow Fairies series. [early chapter book series, ages 6 and up]

This is a really appealing series with animal characters that go through the same painful friendship issues as children do. In this case, Ralphie Ratso feels left out when his brother is enlisted by Chuck Wood, an athlete and the most popular kid in school, to get Fluffy Fabbitski’s attention. She’s only interested in her garden so Louis Ratso’s ideas fall flat.  It turns out that it’s poetry from the first annual poetry competition that fixes everything. Use this book in April to celebrate Poetry Month![early chapter book, ages 5 and up]

Diary of an Ice Princess: Snow Place Like Home by Christina Soontornvat

I would describe this as Airbender + Disney Princess + Percy Jackson. Princess Lina is a “half blood” with a Windtamer from the Boreas Greek wind god side of the family and a human father. Like her mother, she has special powers. Her grandfather is upset that she can’t control the winds yet. Her best friend, a groundling like her dad, wants her to attend boarding school with her. Will Princess Lina be able to control her powers to fit in? [early chapter book, ages 7 and up]

Juana and her dog Lucas are back in another charming installment that describes their upper-middle-class life in Bogota, Columbia. Juana’s big problema begins when her mother starts to wear more perfume than usual and style her hair in a fancy way. Will her mother’s new boyfriend be a big problem for Juana and Lucas? Kids who have single mothers and have nuclear families can relate to Juana’s response to a new person thrust into her life. I love Juana’s personality and her views, especially in the lists that she makes to analyze people, are hilariously funny. She’s the new Ramona with an added bonus of learning about life in Columbia, South America! [early chapter book, ages 6 and up]

King & Kayla and the Case of Found Fred by Dori Hillestad Butler, illustrated by Nancy Meyers

Kayla and her dog King find a lost dog, Fred, at her grandmother’s house.  Fred is not a stray; he has a human family, but how to get him back? Kayla and King are on the case to solve the mystery of where Fred came from. Can they return him to his family? [early chapter book, ages 7 and up]

Douglas is a city mouse who needs to escape from a predatory cat. His route seems unlikely but it’s ultimately successful — through the pocket of a strange girl! Yes, the plot is quiet but effective. This book reminds me of a chapter book version of The Invention of Hugo Cabret by Brian Selznek. Both have pencil drawings that feel like storyboards to a movie. Both have plots that are twisting, unusual, and strangely riveting. This is a book that will warm the heart of a reader! [chapter book, ages 6 and up]

The Pepper Party Picks the Perfect Pet by Jay Cooper

It’s another chapter book animal rescue story but this time, it’s with the wacky Pepper family. Annie wants to adopt a Chihuahua named Azzie but her parents opt to choose names from a hat. Her siblings have other ideas about the “perfect pet.” As the pets come home to the Pepper residence, they meet trouble and sibling sabotage. Will Annie ever get a turn to bring Azzie home? [early chapter book, ages 7 and up] 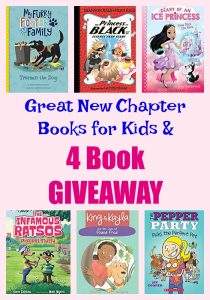