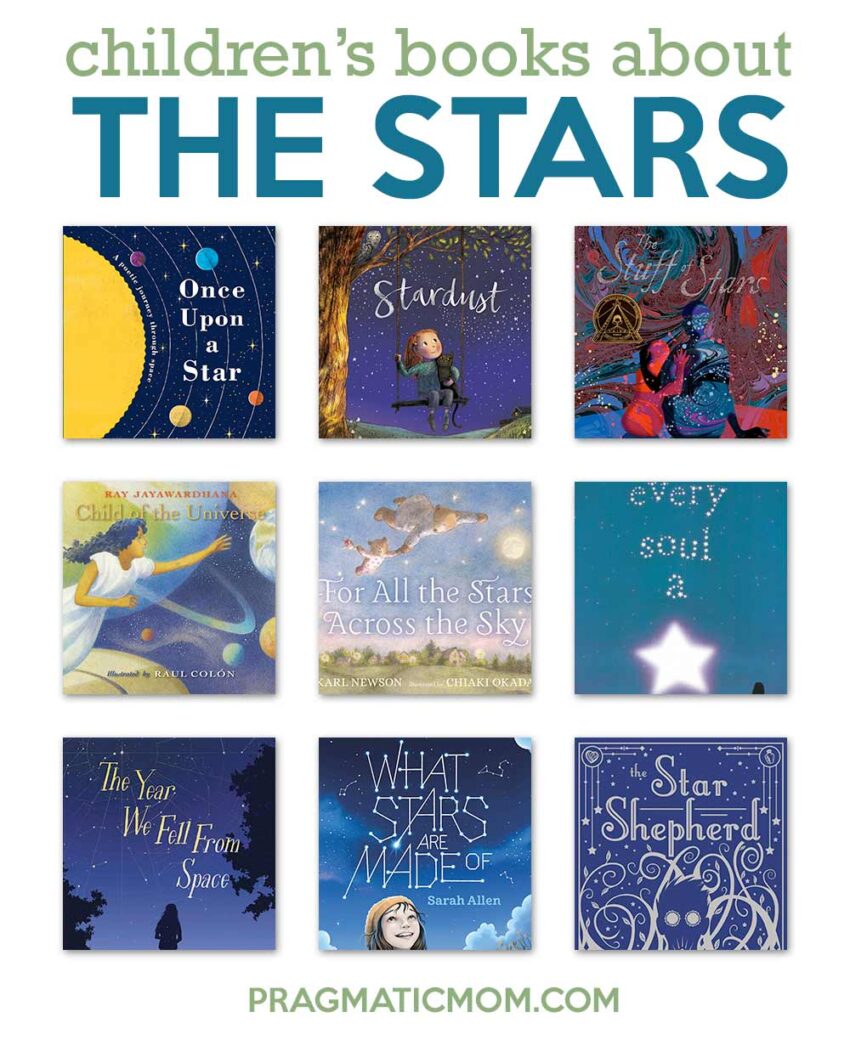 Stars are like nuclear reactors. They take a fuel and convert it to something else. Hydrogen is formed into helium, and helium is built into carbon, nitrogen and oxygen, iron and sulfur—everything we’re made of. … So most of the material that we’re made of comes out of dying stars, or stars that died in explosions. from National Geographic 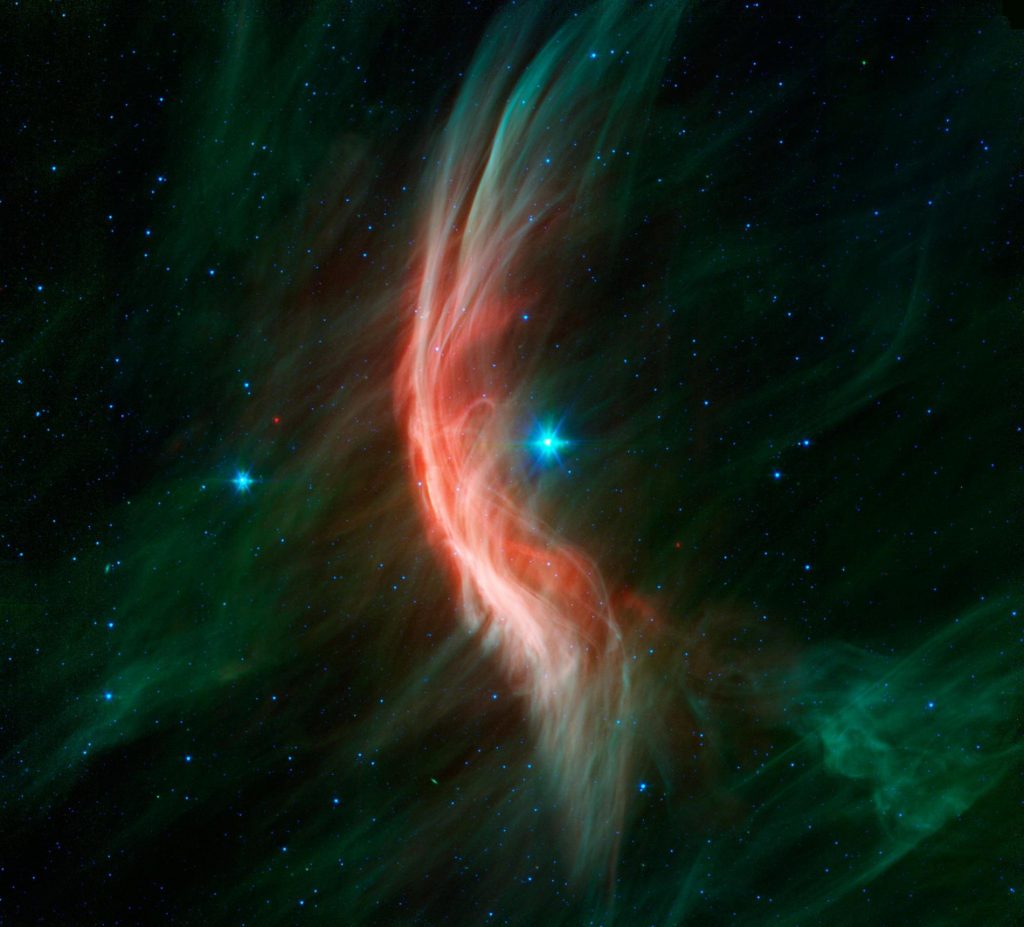 It’s not an obvious thing … that we are all made of stardust. It sounds poetic and even metaphorical, but we are in fact, made of stardust, and this realization makes the cosmos seem both near and far away.

We Are Made of Stars: Stars in KidLit

Once Upon a Star: A Poetic Journey Through Space by James Carter, illustrated by Mar Hernandez

Told in rhyme, this is the story of how stars were formed from The Big Bang, with a certain star becoming our sun as part of our solar system. As the sun warmed our earth, life grew and thus we are all made of stardust. [picture book, ages 4 and up]

Stardust by Jeanne Willis, illustrated by Briony May Smith

Being a star and coming from stars are not exactly the same thing, but it’s a comforting thought to a little girl who feels like her older sister is always in the limelight instead of her. In this intergenerational story, the girl’s grandfather gives his granddaughter a special message that we all shine in different ways because we are all made of stardust. [picture book, ages 4 and up]

The Stuff of Stars by Marion Dane Bauer, illustrated by Ekua Holmes

Ekua Holmes gave an incredible keynote speech at the recent NESCBWI in May 2019. Included in her talk was her inspiration for the marbling to illustrate this book. Because … how does one go about depicting the whole universe?!! It was a scrap of marbled paper that she found in her studio while cleaning it for ideas that gave rise to the gorgeous illustrations of this book. Ekua actually took several classes on marbling paper in order to create these illustrations. With both the words and illustrations, this picture book captures the universe as it explodes creating the stardust that forms stars, planets, and eventually us! [picture book, ages 4 and up]

Child of the Universe by Ray Jayawardhana, illustrated by Raul Colon

“My father says I am made of stars.

He turns off the light so it is dark.”

Is the world a microcosm within a child or the child a microcosm of the world? This lyrical love song of an astrophysicist to his daughter emphasizes the preciousness of each child and his or her place in the world. From atoms to bones, we are all made of stardust. We are all children of the universe. [picture book, ages 4 and up]

For All the Stars Across the Sky by Karl Newson, illustrated by Chiaki Okada

It’s bedtime and Luna wishes on stars that she can fly like birds. She and her mama take a magical journey traveling around the world, exploring from different vantage points. As they snuggle before they sleep, this bedtime story that celebrates the imagination also shows the power of wishes on stars. [picture book, ages 4 and up]

Every Soul a Star by Wendy Mass

…in a few billion years the sun will have used up all the hydrogen inside it and will swell up, absorbing the planet Mercury and making life on Earth uninhabitable. Then the sun will shrink until it’s really small. And then a few billion years after that, it will eject gusts of matter from all around it, including what’s left of earth and the atoms of everyone who has ever lived there. The atoms will be sent out into the farthest reaches of space to become parts of other stars and planets and creature.”

Told from three points of view, Ally, Bree, and Jack are at a crossroads brought together under very different circumstances to witness a total solar eclipse. (Personally, I can attest to the power of witnessing a total solar eclipse when my family and I drove to Oregon to witness one.) Ally is the most connected to the stars having run constellation and astronomy lectures at her family’s campground for years. Bree’s family are also interested in astronomy but she’s hidden her inner geek in pursuit of middle school popularity and a career in modeling. Jack is avoiding summer school to accompany his science teacher who is taking a group of people to watch the total solar eclipse. The stars align to bring them together and to challenge them to work together in the name of science and discovery. It’s when they all discover who much they are alike and how connected they are, as we all are, as part of the universe made of stardust. [middle grade, ages 8 and up]

“Liberty Johansen’s love of the stars is paramount in this book. She doesn’t just love them—she is guided by them and when she looks at the night sky, the stars show her how she’s feeling…which is important because a lot of times, Liberty doesn’t know how she’s feeling.” [middle grade, ages 9 and up]

From her book cover reveal in the Nerdy Book Club.

What Stars Are Made Of  by Sarah Allen

When her big sister Nonny tells her she’s pregnant, Libby is thrilled―but worried. Nonny and her husband are in a financial black hole, and Libby knows that babies aren’t always born healthy. So she strikes a deal with the universe: She’ll enter a contest with a project about Cecilia Payne, the first person to discover what stars are made of. If she wins the grand prize and gives all that money to Nonny’s family, then the baby will be perfect. Does she have what it takes to care for the sister that has always cared for her? And what will it take for the universe to notice? [middle grade, ages 10 and up]

p.s. I just received this ARC (Advanced Release Copy) of The Star Shepherd by Dan Haring and MarcyKate Connolly which is described as Neil Gaiman meets How To Train Your Dragon. It’s a fantasy about racing to save the stars before their light is extinguished for good. [middle grade, ages 8 and up]

All Done Monkey: Star Crafts, Activities, and Recipes for Kids 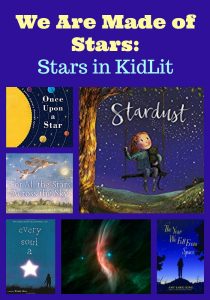 All About Meteors with books, videos and more!

Books for Kids Who Admire Astronauts!

1 thought on “We Are Made of Stars: Stars in KidLit”