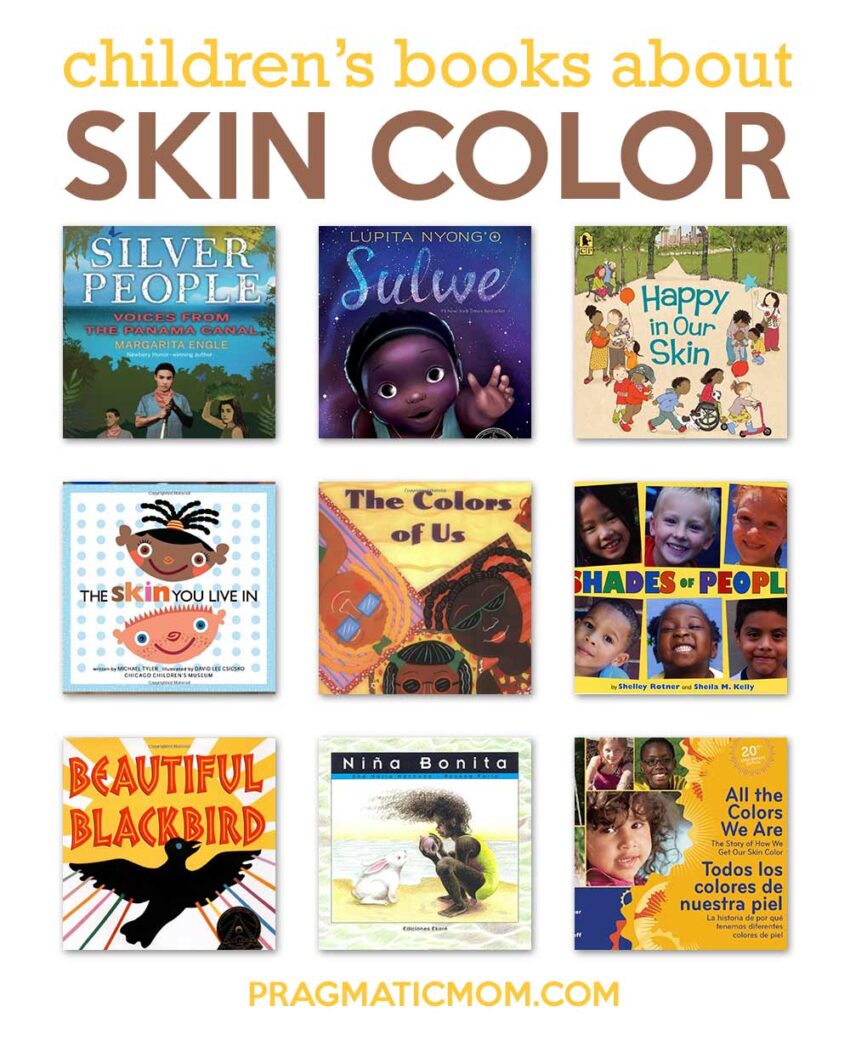 Celebrate diversity with these videos and children’s books about skin color. Combine these books with lessons on skin color and the beauty in all shades.

Pulitzer Prize author Alice Walker coined the term “colorism” in 1982 to mean the “prejudicial or preferential treatment of same-race people based solely on their color.”

It’s a term that defines racism in terms of skin color, favoring lighter toned skin, and it’s not limited to one race or one country.

Colorism is a societal ill felt in many places all around the world, including Latin America, East and Southeast Asia, the Caribbean and Africa. Here in the U.S., because we are such a diverse population with citizens hailing from all corners of the earth, our brand of colorism is both homegrown and imported. And make no mistake, white Americans are just as “colorist” as their brown brothers and sisters. from Time Magazine: The Difference Between Racism and Colorism

I pulled these articles on colorism in Asia to show the prevalence of it there. Interestingly, the roots of colorism have different origins in different countries though pale skin, in general, was shorthand for classism, in China and South Asia.

Pale skin was seen in ancient China as a signifier of being able to stay indoors during the daytime rather than being outside working, and a pale complexion became synonymous with nobility and wealth in Chinese culture. The paler you are in most of Asia, the more socieconomic currency is afforded to you based off of your looks. from Teen Vogue: I’m a Light-Skinned Chinese Woman, and I Experience Pretty Privilege

The caste system, though caste discrimination has been outlawed by the Indian government; still plays a tremendous role in shaping Indian society and the social hierarchy throughout South Asia. The system divides Hindus into different categories based on their status and privilege; granting rights to the upper castes (Brahmin) over the lower castes (Sudras).

The wealthy in pre-colonial times were likely to spend more time indoors among their valuable possessions, unlike the less fortunate — the peasants and servants who worked tirelessly under the blazing hot sun.

This essentially led to lighter skin being associated with the upper class; a symbol of wealth and prosperity.

European colonization and influence, of course, only helped reinforce the idea that lighter skin and “whitewashed features” were more desirable and widely accepted. from The Huffington Post: Daring To Be Dark: Fighting Against Colorism In South Asian Cultures

White skin is actually a traditional concept of beauty, with the notion of fair complexions as beautiful in Japan started in the Heian Era, from 794AD to 1192AD (Graham-Diaz, 2001). The reason for the preference of fair skin back then is quite different from today.

The lifestyles of rich, noble women who were considered sophisticated and classy during the Heian Era consisted of just staying indoors in their residence without going outside, waiting for the men to be back. In this era, it was semi-dark inside the residence even during the daytime and there was not enough light at night thus women needed to have extremely white complexions, so that the face would stand out and be attractive in such environment where there is not enough light.

That is why the tradition of putting powder on their face to make it look white began. White powder thus became a common make-up to look beautiful in the Heian Era. from Japan Sociology: Colorism and Discrimination in Japan’s Marriage Scene

In Korea where there are 20 plastic surgeries per 1,000 people, the highest in the world, outpacing even the United States, colorism exists today, defining beauty standards.

Jiyeon “Jenny” Baek, an international student from Seoul, South Korea, accounts her own culture that perpetuates the idea of the fairer you are, the better. Anyone who has tan skin is often faced with rejection and are shunned or singled out in South Korea. from Her Campus: Colorism and How K-Pop Fits Into the Mix

It’s interesting how it is human nature to find differences within people versus commonalities. And it’s these differences that lead to the attainment of more resources … the basic drive of human survival from caveman days.

Colorism starts at home and, as such, can be defeated by discussing with kids a more accepting message about loving the skin you are in. These picture books can help with that discussion, though I note that there are no picture books about colorism with Asian characters. If you know of any, please share! Thank you!

p.s. I wanted to add a middle grade novel in verse that covers this topic as well. As I recall this excellent book, those with lighter skin worked less dangerous jobs for more pay versus those with darker skin.

Did you know that there was an Apartheid system in Panama during the construction of the canal? Whites were paid in gold and those of color, much lower wages —  in silver.

Margarita Engle’s background as a botanist and agronomist is evident as she tells a story of the ecological impact of the Panama Canal as well as the Civil Rights story that is largely unknown.

I have an interview with Margarita Engle on Silver People at the Multicultural Children’s Book Day blog. [novel in verse, ages 12 and up]

Lupita Nyong’o is the perfect person to talk about beauty and skin tone. Sulwe, which means star, gets a visit from an actual star and then this story turns into a kind of modern folktale.

It’s a reminder to recognize the inner beauty of girls from a role model who generously shares this story of her own youth to help others find their way. [picture book, ages 4 and up]

Happy in Our Skin by Fran Manushkin, illustrated by Lauren Tobia

This is a great picture book to introduce the concept of skin as it covers several facets: the diversity of skin colors, the biological function of skin, and the individuality of skin via our fingerprints. Fran makes skin a celebration with rollicking rhymes and Lauren’s illustrations exude joy and love with inclusive illustrations.

This is a skin-to-skin hug of a message! [picture book, ages 2 and up]

The Skin You Live In by Michael Tyler, illustrated by David Lee Csicsko

This picture book is very similar to Happy In Our Skin which I prefer but this is a good choice if your kids want multiple books on this theme. It also rhymes, compares skin color with food, and has the same positive and empowering message. [picture book, ages 4 and up]

The Colors of Us by Karen Katz

Karen Katz explores the diversity of skin tones with comparisons to food — an easy analogy for kids to understand. Seven-year-old Lena is going to paint a picture of herself. Her mom helps her understand the nuances of color when portraying skin.

This book is great for kindergarten age children who draw self-portraits at school, particularly paired with multicultural crayons! [pictrure book, ages 4 and up]

Shades of People by Shelley Rotner and Sheila M. Kelly

I like this paired up with The Colors of Us as the message is similar. But because this book uses photographs, it helps to connect the concept of skin tone with a message of inclusivity.

It also extends the concept of the challenge of getting the right shade when painting (or drawing) because of the wide range of diversity of skin color. [picture book, ages 4 and up]

Ashley Bryan draws his story from a folk tale from Zambia and tells it as if speaking in an oral tradition to an audience. This powerful story about finding beauty within can be read on different levels from black is beautiful, generosity, individuality, and the power of art.

Be sure to ask the reader if blackbird is black or all colors of the sun.  [picture book, ages 3 and up]

This book examines skin color as a definition of beauty. A white rabbit admires the black skin of a little girl. When the rabbit tries to turn itself black, there are subtle references to anti-black racism from the Jim Crow era.

There is also a STEM genetics message that quietly says science and facts overcome racism and ignorance. You can use this picture book to discuss racism for older kids as well. [picture book, ages 4 and up]

All the colors we are: the story of how we get our skin color/Todos los colores de nuestra piel: la historia de por qué tenemos diferentes colores de piel by Katie Kissinger, photographs by Chris Bohnhoff

This book takes a nonfiction approach to skin color, and does it in two languages, Spanish and English. It covers the role of melanin and adaptation, and the biological link to skin color from ancestors. Because it uses facts and science, it’s a good pairing with all the rest of the books on this list.

You can reinforce the teachings of this book by using the two videos below as well. [bilingual Spanish/English picture book, ages 5 and up]

I’m not sure if the message of the book matches the audience. I like this story that revolves around not judging a person by their skin color, but by their character. But it feels a little too advanced for a preschool and Kindergarten audience.

I’d use this picture book when discussing racism at any age. [picture book, ages 4 and up]

Videos on the Science of Skin

Our own personal sunscreen: melanin!

Skin color is little more than an adaptive trait for living on rock that orbits the sun. It may reflect light but it certainly does not reflect character!

The Science of Skin by Angela Koine Flynn

When ultraviolet sunlight hits our skin, it affects each of us differently. Depending on skin color, it’ll take only minutes of exposure to turn one person beetroot-pink. Another might require hours to experience the slightest change.

What’s to account for that difference? And how did our skin come to take on so many different hues to begin with?

The Role Skin Plays in Our Body: Protecting, Regulating & Sensing

But besides keeping your organs in, what is its purpose? Emma Bryce takes us into the integumentary system to find out.

The Science of Skin by Emma Bryce

Between you and the rest of the world lies an interface that makes up 16% of your physical weight. This is your skin, the largest organ in your body. Laid out flat, it would cover close to 1.7 square metres of ground. 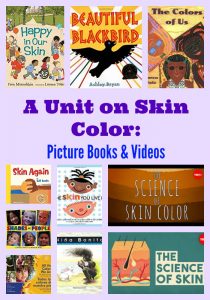