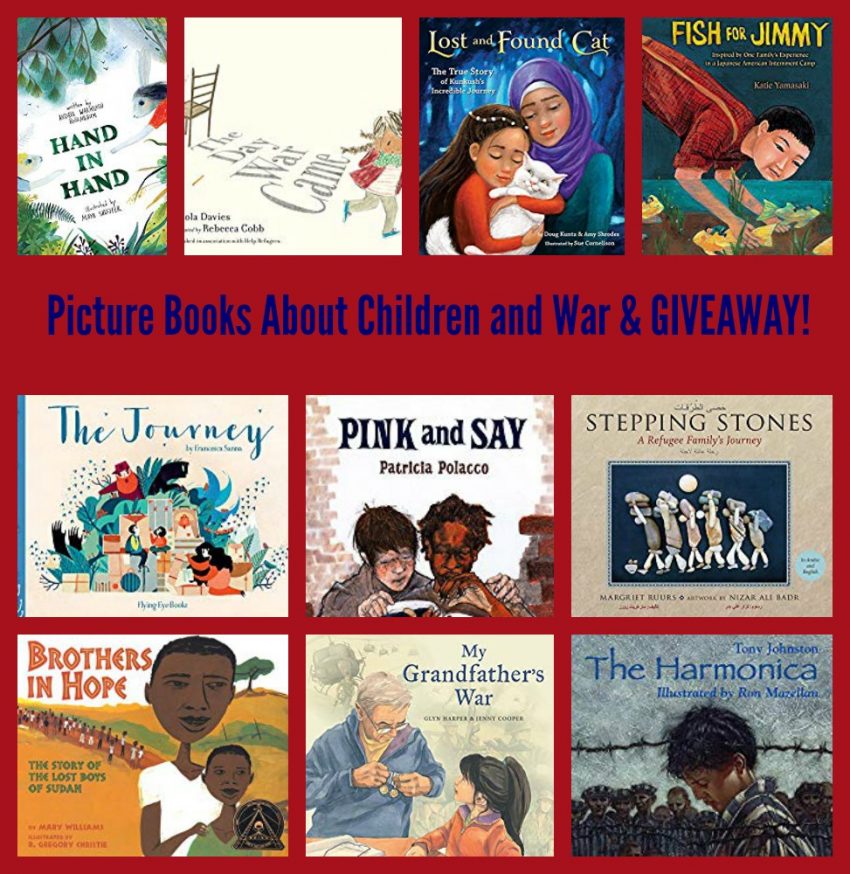 Please welcome my guest author today, Andria Rosenbaum, with her list of picture books about children and war! We are giving away a signed copy of her latest book, Hand in Hand. Please fill out the Rafflecopter at the bottom to enter.

Hand in Hand by Andria Rosenbaum

This is a really powerful story about the horrors of war. After soldiers stomp into town, a brother and big sister wait for their mother to return with food but she never does. They are sent to an orphanage and her brother gets adopted. The older sister eventually immigrates to a new country, and late into her life, she is able to see her brother. She has kept her promise to never say goodbye. This reads to me as a Holocaust story that any refugee of war can relate to. [picture book, ages 5 and up]

This is a lyrical lullaby about the refugee experience. A boy and his mother escape war and set off to sea where they help others along the way. The lovely watercolor illustrations balance the heavy theme. Because the words are so poetic, they lift the reader to a place of inspiration, celebrating courage, fortitude, and compassion for others. This is a gentle book to read with young children to teach them about the refugee experience. [picture book, ages 4 and up]

Ruby in the Ruins by Shirley Hughes

World War II is over and Ruby and her mother await the return of her dad, a soldier serving far away. She and her mother have survived the blitzkrieg of bombings but there are many houses in ruins in London. It’s a little strange to have dad home again. Ruby explores the bomb site ruins with the neighborhood boys when she falls and hurts her knee. When her father comes to bring her safely home, she can finally give him a kiss. This is a story of fatherly love and the bonds that ties families together. [picture books, ages 5 and up]

Picture Books About Children and War

Fish for Jimmy by Katie Yamasaki

After the bombing of Pearl Harbor in 1941, Taro and Jimmy are separated from their father and
taken to internment camps. Taro worries most about his younger brother, Jimmy who stops
eating. But he bravely finds a way to restores Jimmy’s hope and his appetite. Based on a true
story, Katie Yamasaki tackles this terrible time in history. [picture book, ages 6 and up]

Pink and Say by Patricia Polacco

Pinkus, a young, black, former slave, now soldier saves Say, a white boy/soldier during this civil
war story. The kindness and humanity shown to the young, white boy by Pink and his mother is
seared into Say’s (Sheldon Russell Curtis) memory. He passes Say’s story to future generations like a prized possession. Based on a true story told to the author by her father. [picture book, ages 6 and up]

Brothers in Hope: The True Story of the Lost Boys of Sudan by Mary Williams, illustrated by R. Gregory Christie

In this true story, War takes everything from eight-year-old, Garang. Forced to flee with
thousands of boys like him, he walks on a harrowing journey to Ethiopia, ending up in Kenya.
After many years, Garang and his brothers are allowed to immigrate to the United States. [picture book, ages 7 and up]

The Journey by Francesca Sanna

War interrupts and alters the life of a young girl and her family forever. When her father is killed
they are forced to flee the only home she’s ever known. She places all her trust in her mother as
they travel to find a new home. [picture book, ages 5 and up]

My Grandfather’s War by Glyn Harper

Sarah asks her grandfather to share his experiences as a soldier in the Vietnam War so she can
better understand his moods. She gains a new understanding of why he limps, and is sometimes
sad as he explains his regrets over his involvement in the war. [picture book, ages 4 and up]

This is the true story of a family forced to flee Mosul, Iraq. They escape with their beloved cat,
Kunkush. But along the way, Kunkush is frightened and runs away. Eventually, thanks to the
help of many strangers, the family is reunited with their beloved pet in their new home in
Norway. [picture book, ages 4 and up]

Base on a true story, this book is about a Jewish, Polish boy separated from his family during the
Holocaust. It’s the harmonica, given to him by his father that enables him to survive when he’s
forced to play for the commandant. This is a dark book that doesn’t soften the horrors of war. [picture book, ages 7 and up]

This poetic and powerful story of a young refugee’s harrowing escape and survival is beautifully
illustrated in unique stone artwork. It’s written in both English and Arabic. [picture book, ages 7 and up]

When war rains down on a young girl it suddenly shreds her life. Alone, she finds herself forced
to escape. As a refugee, she is turned away until other children welcome her to their classroom.
The book spotlights the ten million-plus, children refugees who are left alone to somehow
survive. The soft illustrations powerfully echo the theme. [picture book, ages 6 and up]

We are giving away a signed copy of her latest book, Hand in Hand. Please fill out the Rafflecopter below to enter. 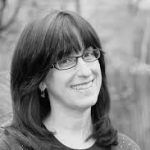 Andria Warmflash Rosenbaum is the author of TRAINS DON’T SLEEP, illustrated by Deirdre
Gill (HMH) and BIG SISTER, LITTLE MONSTER, illustrated by Edwin Fotheringham
(Scholastic Press). She hunts for picture book ideas from her home in New Jersey. You can
follow her on Twitter @andriawrose, or learn more about Andria and her books at her website. 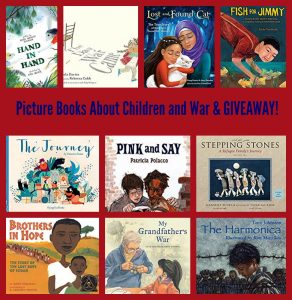 13 thoughts on “Picture Books About Children and War & GIVEAWAY!”