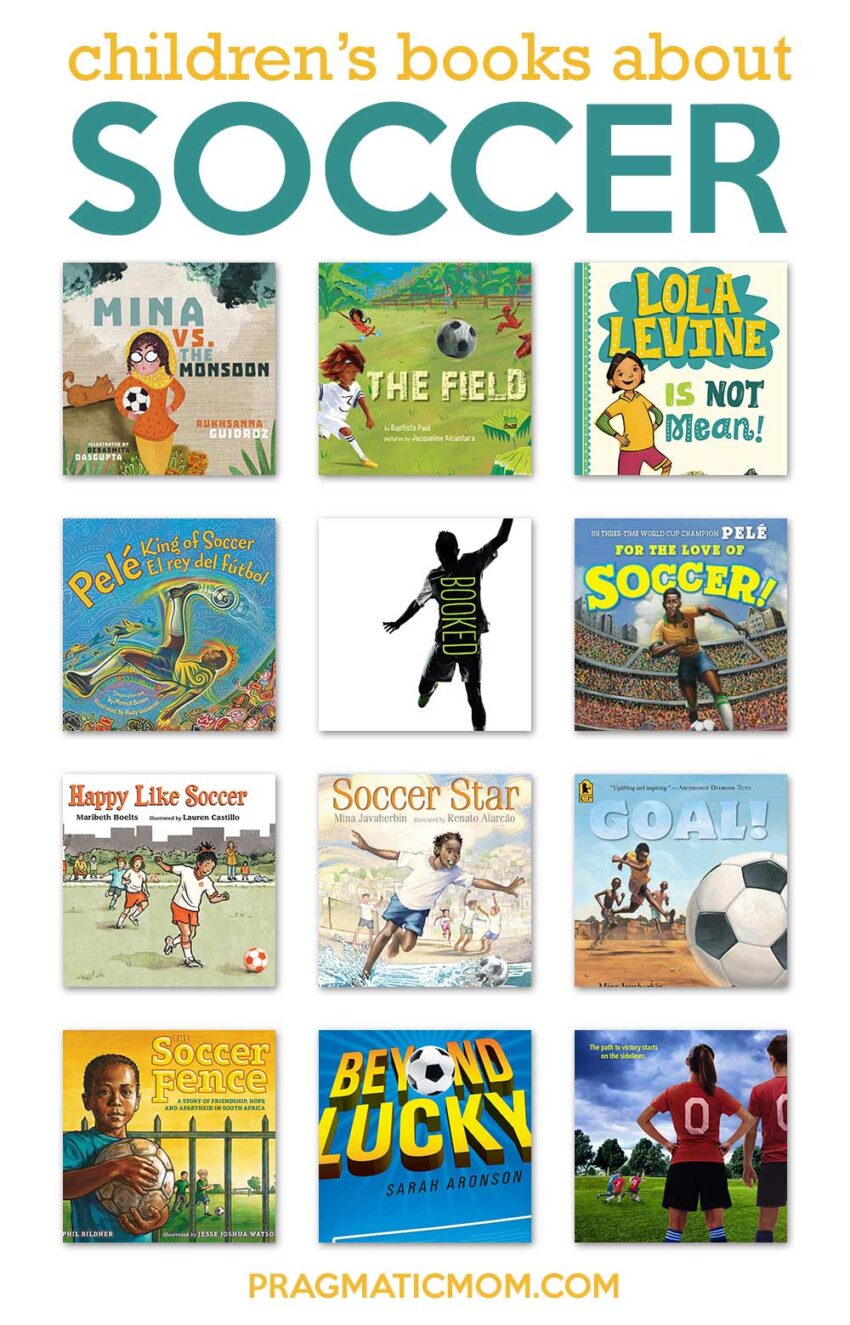 Inside: Looking for the best children’s books about soccer? Discover fiction and nonfiction books for kids to read and learn everything about this worldwide sport!

Mina vs. the Monsoon by Rukhsanna Guidroz, illustrated by Debasmita Dasgupta

This isn’t a picture book about the monsoon rains. It’s really a story about a young girl who loves soccer. There is a surprise about who else likes soccer that you can discover drinking chai, eating samosas, and, of course, playing soccer! [picture book, ages 4 and up]

The Field by Baptiste Paul, illustrated by Jacqueline Alcántara

It just takes an open field, a makeshift goal, and a ball to play futbol. Rain, mud, and mamas calling you in can stop these joyous children from playing soccer! This is a joyous celebration of a Creole childhood and of the love of soccer. Creole words included in the text.

“Creole is a language spoken by peoples of several Caribbean islands including Haiti, Saint Lucia, and Dominica.” [picture book, ages 4 and up]

I love the diverse characters in this new easy reader series by Capstone featuring girl protagonoists. In Soccer Dreams, Keisha joins a soccer team because wants to be a striker like her grandpa but it turns out that there’s another position that suits her more. [easy reader, ages 5 and up]

Lola Levine is Not Mean! by Monica Brown, illustrated by Angela Dominguez

Lola Levine is a great soccer goalie but that’s not always appreciated by her classmates. The popular girls think Lola is mean when she slide tackles a classmate who ends up injured. Lola uses her writing to resolve her problems and young readers will enjoy this strong girl character as she navigates second grade.

I especially liked the references to Monica Brown’s Pelé soccer picture book biography (also on this book list), and a favorite picture book of mine, Everyone Poops. Monica Brown scores the winning goal with this soccer story of fitting in, being yourself, and playing your heart out.[early chapter book series, ages 6 and up]

You Can Do It, Yasmin! by Saadia Fariqi, illustrated by Hatem Aly

The first story in this collection features Yasmin reluctantly learning to play soccer. She tries to get out of playing but Coach Garcia wants her to try new things. She gets chosen to be a goalie. Will she be able to stop the ball? Yasmin is a spunky and relatable character that readers will root for! [chapter book, ages 6 and up]

My son learned that he liked poetry after reading The Crossover. My son doesn’t play basketball but he’s played club soccer since he was eight. When I told him Kwame Alexander’s next book was about soccer, he was excited to read it. He liked this book about soccer, divorce, and bullying too.

I was surprised that a soccer star could be bullied. I haven’t seen that where I live, but I guess it happens. [novel in verse, for ages 10 and up]

“Eleven-year-old Maximiliano Cordoba loves playing fútbol, and hopes to someday play on the celebrated Santa Maria national team just like his Papá and his Abuelo did when they were young. And tryouts are only a few weeks away. But when Max is invited to join a fútbol clinic in another town, his father refuses to give him permission to go. Instead, Max is invited to help his father find needed stones for building a new bridge and earning money to buy a new pair of coveted soccer shoes. Additionally, Papá and abuelo offer to coach Max themselves so he can make the team. But when Max learns that he will need a birth certificate to play on the Santa Maria team, he also learns that his Papá doesn’t have a copy of it. Nor does Max know where his mother is, only that she left when he was a baby…For the most part, Max’s story seems to be divided into two unrelated threads – his desire to play fútbol and his desire to find out about his mother. But then Ryan begins to tie these two threads together in the most unexpected way and that when the book becomes unputdownable.” [middle grade, ages 8 and up]

For the Love of Soccer! by Pelé, illustrated by Frank Morrison

Arguably the best soccer player of all time, Pelé speaks to a young audience about what drove him. He loved competing in games, being part of a team, and most of all, the pure love of the game. His positive messages and inspirational story of overcoming poverty are other reasons why he is an icon of soccer. [picture book autobiography, ages 4 and up]

Happy Like Soccer by Maribeth Boelts, illustrated by Lauren Castillo

Sierra lives with her aunt in a small apartment in the inner city. She’s made an elite soccer team that plays far from her neighborhood. The other players’ parents are able to cheer for their kids but Sierra’s aunt has to work. Saturdays are busy days at the restaurant.

For the last game, her aunt’s boss offers her a different shift so she can attend her niece’s game but it’s rained out. Sierra figures out a solution but is she brave enough to ask her coach [picture book, ages 4 and up]

This picture book should have been the 2014 World Cup designated picture book. Set in Brazil, it’s an homage to all the children who work for a living but manage to rise from poverty through the game of soccer.

Paulo Marcelo Feliciano works on a fishing boat by day and his captain also coaches their pick up team. They play to win but when one player gets hurt, will Paulo’s little sister finally be able to join the boys? [picture book, ages 4 and up]

Goal! by Mina Javaherbin, illustrated by A. G. Ford

A new federation-size soccer ball is a rare prize in their small South African town. Ajani and his friends want to play soccer with it but how can they keep their ball safe from bullies that roam their streets? [picture book, ages 6 and up]

The Soccer Fence: A story of friendship, hope, and apartheid in South Africa by Phil Bildner

When Apartheid ended, the soccer fence separating Hector from a pitch where white boys played soccer was still closed. For the African Cup of Nations in 1996, the South African team was, for the first time, inclusive and their victory defeating Cameroon for the title helped to bring their country together.

And finally, the fence opened for Hector. The power of soccer to find commonality and bring people together is powerfully illustrated in this uplifting picture book. A history of Apartheid is included. [historical fiction picture book, ages 6 and up]

Beyond Lucky by Sara Aronson

This manages to be a soccer book, a coming of age book, and a book that explores the idea of self-confidence versus luck. Is it Ari’s rare and valuable Wayne Timcoe trading card that brings him luck? Is that why he’s the starting goalie this year instead of on the bench like previous years?

But when his card goes missing, it’s up to him to stop the fighting on the team between his best friend and the new girl and figure out what truly makes him a good player. [ middle grade, ages 8 and up]

Twelve-year-old Jeff Michaels, son of a Philadelphia TV sports reporter, is just learning to play soccer on the new sixth-grade team at his middle school. Andrea Carillo has fought her way onto the squad, but the coach doesn’t think girls should play with boys, so she’s riding the bench with Jeff―even though she’s one of the best players.

With Jeff’s help, the Philly media gets ahold of the story, and suddenly Andi is all over the news as she shows her worth on the soccer field. But amid bullies, threats, and a media firestorm, will Andi’s skills and Jeff’s perseverance be enough to save the season?

From sportswriter John Feinstein comes this action-packed novel about two kids who may be “benchwarmers,” but prove themselves naturals when it comes to teamwork, friendship, and finding a path to victory. (publisher description) [middle grade, ages 8 and up]

I have more soccer-related posts: 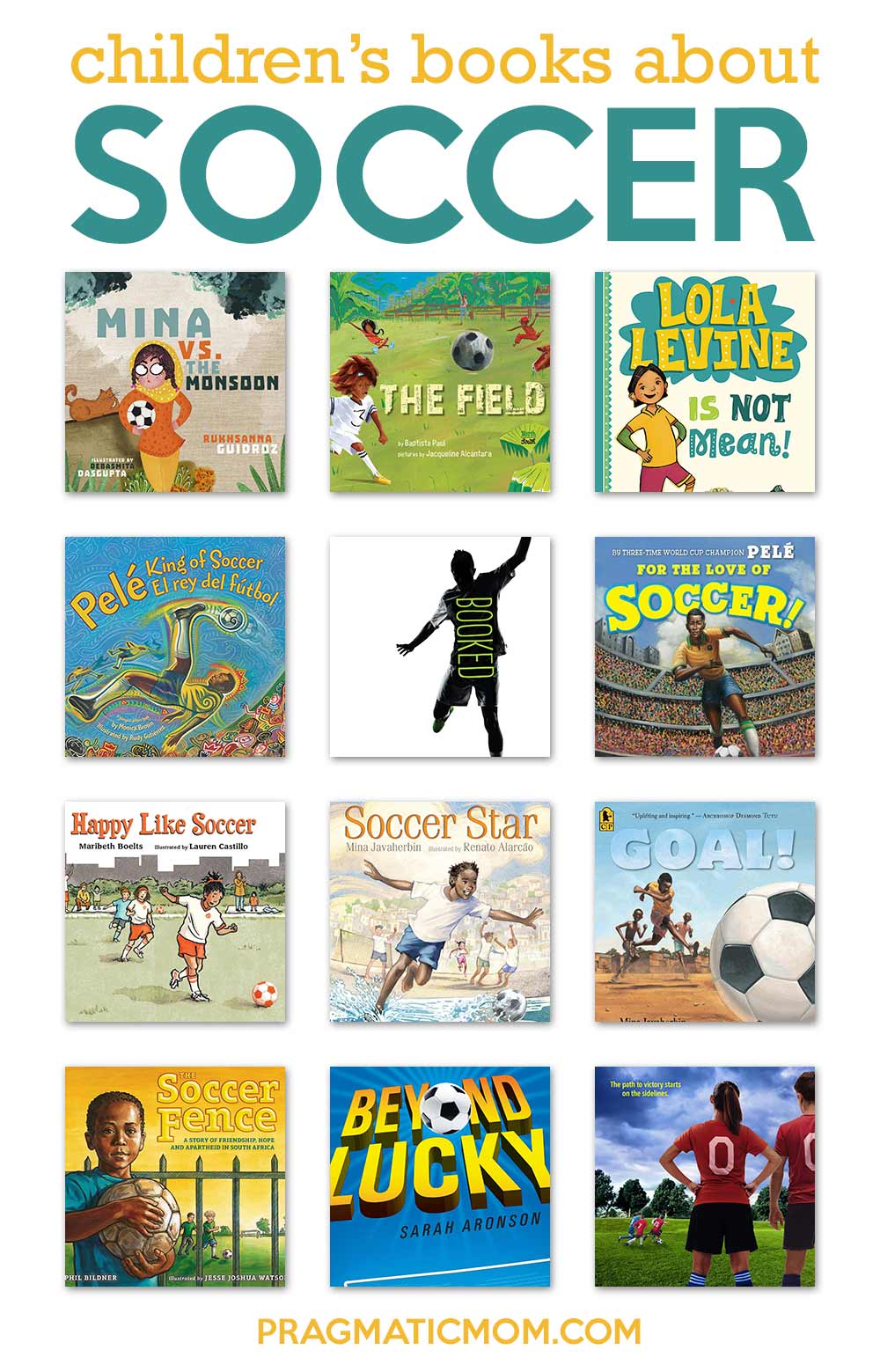