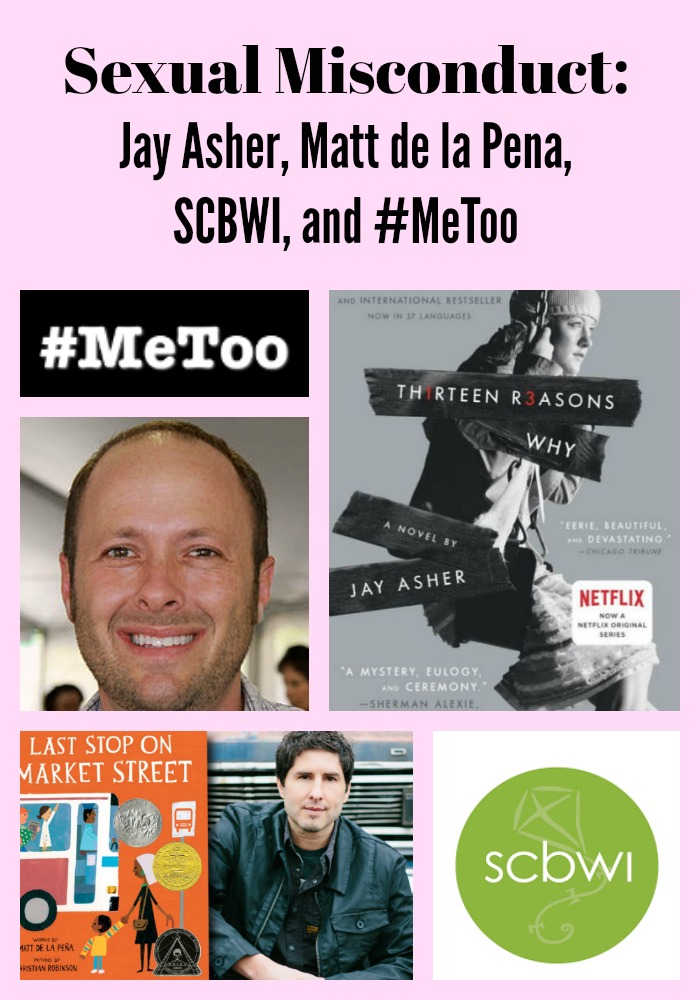 Jay Asher, author of Thirteen Reasons Why, has recently filed a defamation lawsuit against SCBWI and Lin Oliver.

Mr. Asher’s career imploded when he was accused of sexual misconduct, and the Society of Children’s Book Writers and Illustrators announced that he had violated the professional organization’s anti-harassment policy. The repercussions were swift: His literary agency dropped him, speaking engagements and book signings evaporated, and some bookstores removed his novels from their shelves.

Here are the accusations against Jay Asher that appeared in the School Library Journal article that has since been removed from their website:

Accusation 1: “I find it bizarre and horrifying that nobody has named Jay Asher. I am equally horrified at hearing of his disgusting Twitter claims of being so very pro – #MeToo and #TimesUp. The irony is incredible, and belongs in an episode of Black Mirror.”

Accusation 2: “After the Medium essay by Anne Ursu, people want us to name names. They want to know “who.” I will say the name from my story: Jay Asher. Happy, now?”

Accusation 3: “I was also one of those in Anne Ursu’s survey and the name from my story is also Jay Asher.”

Accusation 4: “I, too, experienced predatory behavior from Jay Asher. He uses SCBWI to find young, new writers. When I discovered his true nature, I cut off all communication and tried to warn other women through the whisper network. He found out and used threats and intimidation to quiet me. Well, Mr. Asher, the intimidation stops NOW. We will no longer whisper.”

Vanity Fair ran an article Thirteen Reasons Why Jay Asher has been Accused of Sexual Harassment:

“In April 2017, Mr. Asher voluntarily agreed that he would no longer attend S.C.B.W.I. conferences,” the statement reads. “This was in response to many years of harassment from a group of authors with whom he had consensual relationships that ended with some hurt feelings when they learned about each other.”

The statement adds that Asher is still a member of good standing within the S.C.B.W.I., and that there “was no allegation, investigation, or finding of sexual harassment” by the group. “These women were not subordinates of Mr. Asher; they were his peers and they each entered into romantic relationships with him voluntarily, with some initially pursuing him,” the statement continues. “Mr. Asher was married at the time of these relationships, as were many of the women. He is deeply sorry for the pain these consensual decisions caused his family, and others.”

“Thirteen Reasons Why author Jay Asher has been expelled from the Society of Children’s Book Writers and Illustrators, the writers’ organization said Monday. The group’s executive director, Lin Oliver,told the Associated Press that Asher was banned last year; this is the first time the news has come to light in a public way.”

“Asher’s name came up multiple times in the comments section of a School Library Journal article about sexual harassment in children’s publishing, though the article itself did not name him. Oliver told the A.P. that the S.C.B.W.I. investigated anonymous claims against Asher and, as a result, he is no longer a member; Oliver did not offer further details about the nature of those accusations.”

I’m not an attorney, but it appears to me that Jay Asher used SCBWI overnight meetings to conduct extramarital affairs. In generating these affairs, he engaged in sexual misconduct. SCBWI, in not having a robust code of conduct and harassment policy, is caught with a seemingly contradictory response, opening itself up for this lawsuit. Do I think Jay Asher is innocent? Absolutely not. I personally think this lawsuit Jay Asher’s way of getting back into the public eye. It’s been a year since he became a pariah and he needs the attention much more so than the money I believe.

I’m glad that Jay Asher is filing his lawsuit. It brings attention back to the #MeToo movement in children’s book publishing. The publishers, I believe, are taking a “lay low” mentality while they wait to see if there is any fallout. In the meantime, they are pumping authors and illustrations accused of sexual misconduct in a money grab like this one: 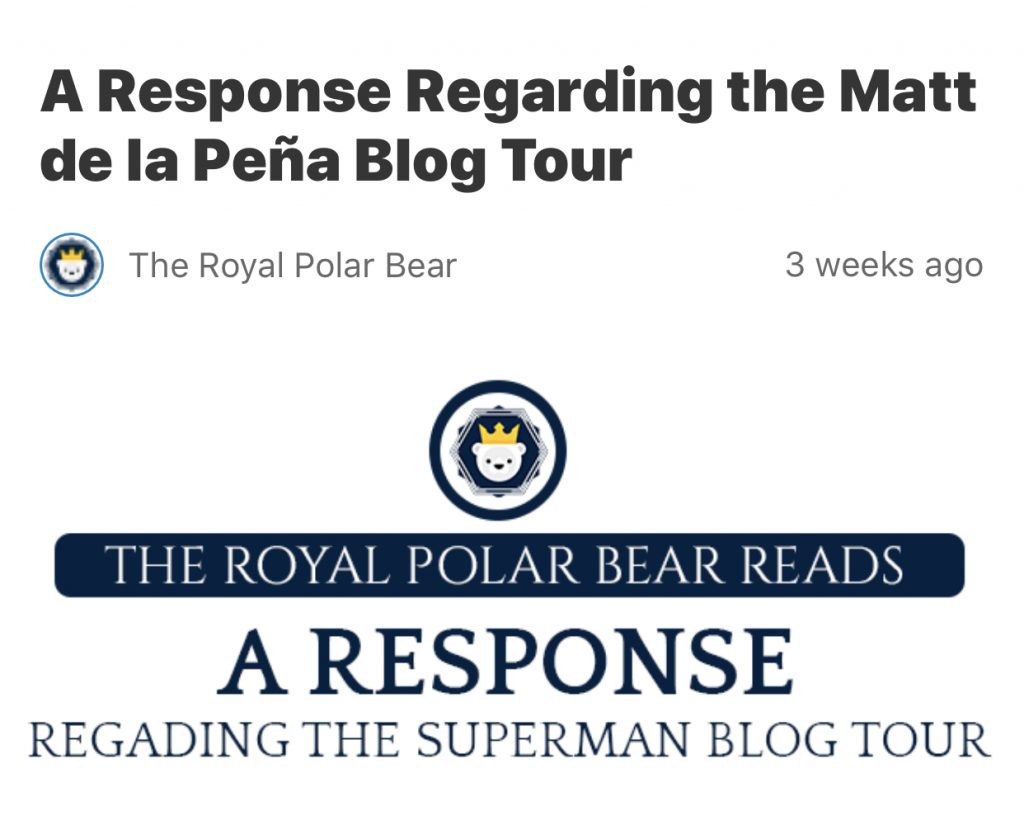 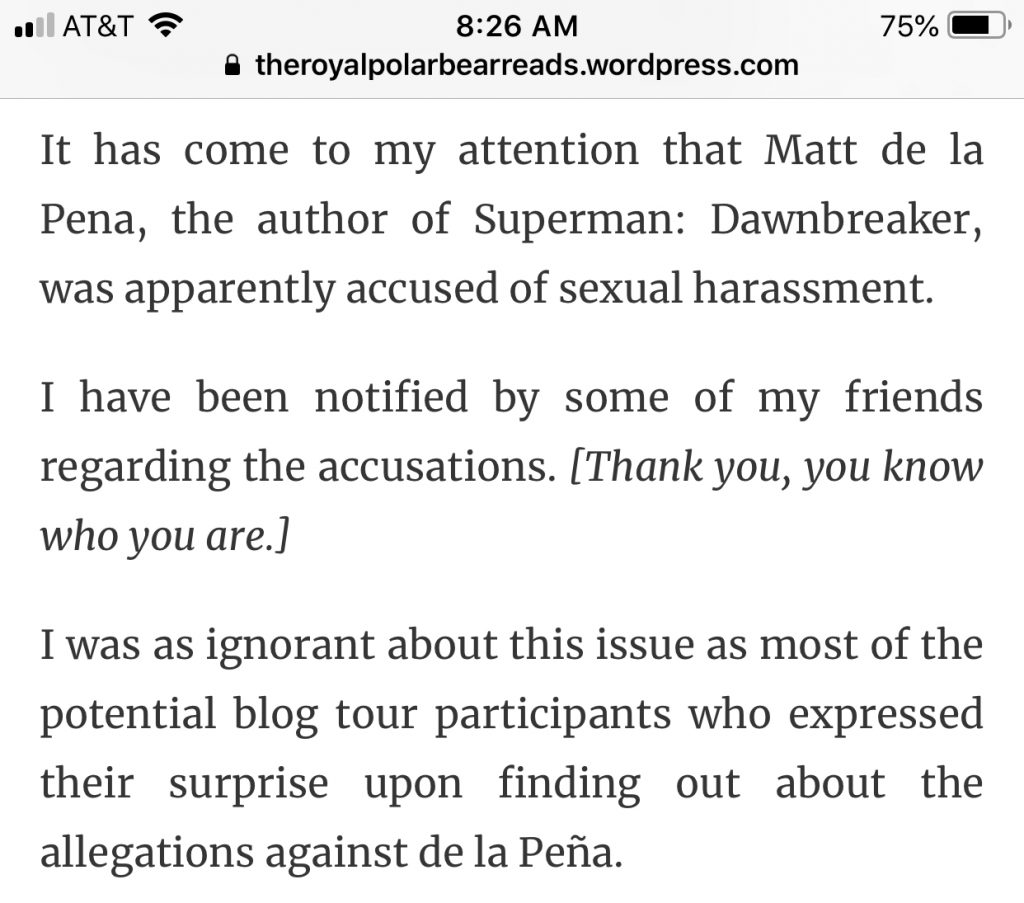 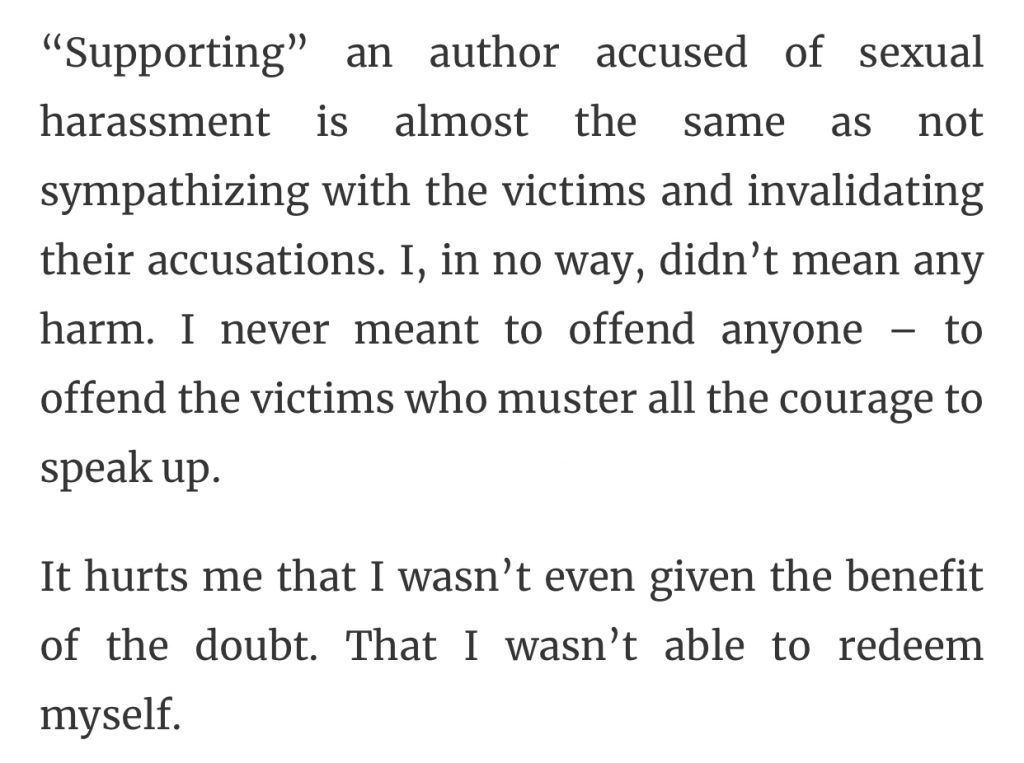 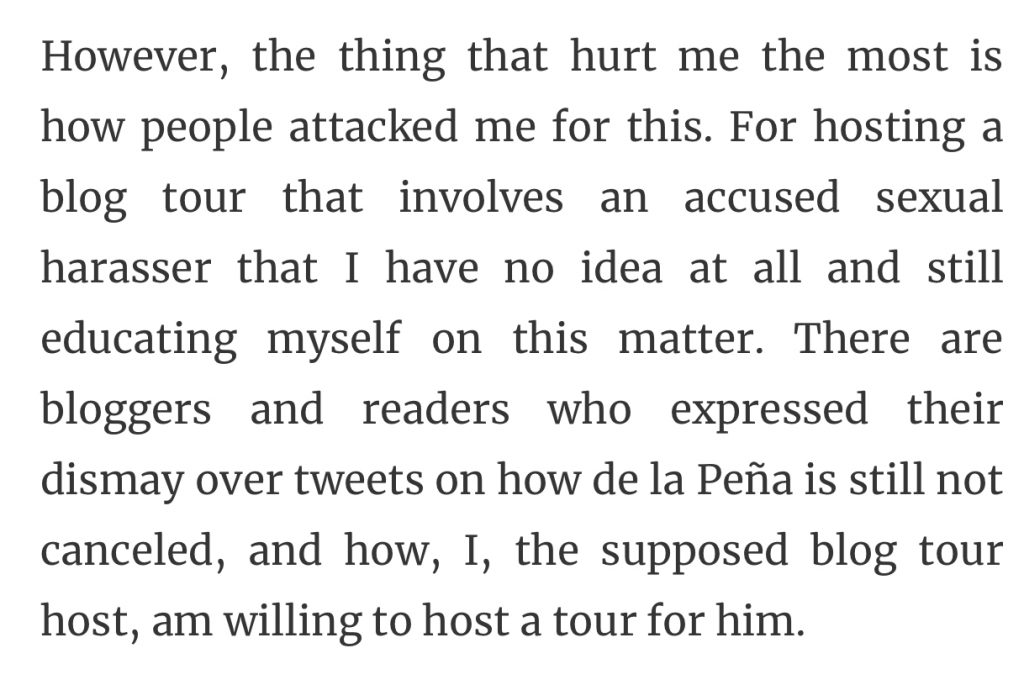 I don’t think it’s the blogger’s fault that he or she set up a blog tour when asked by a publisher. It’s not the blogger’s fault that it was not widely known that Matt de la Pena has been accused of sexual misconduct by three women. There seems to be a back channel campaign to cover it up that anyone making money of those accused are coordinating. They probably realize that it’s a matter of time or of one more incident before it blows wide open, but in the meantime, they are doing a money grab.

Accusation 1: “I wonder if any of Matt de la Pena’s students have weighed in. A friend took a writing class with him and recounted several tales of transactional sexual relationships with his students and creepy behavior.”

Accusation 2: “I didn’t respond to Anne’s survey but Matt de la Pena is someone to steer clear of.”

Accusation 3: “Matt de la Peña. You are powerful and respected in this industry, you should be ashamed of the way you speak to and treat female students. Your business is how we write, not how we look. Among several inappropriate comments, you minimized me down to my appearance in a moment of my education that I worked hard for, that should have been one of my proudest. You made me feel small and objectified. I resent it. I am not shocked to see that I am not the only student you abused your power over.”

Matt de la Pena, hasn’t had time to offer an apology in between all of his speaking engagements, but he somehow found time to change his bio. He no longer considers himself a “love doctor.”

Wny did School Library Journal remove their article that named the sexual predators in the children’s book publishing world. No doubt publishers played a large role.

The novelist Sherman Alexie asked his publisher to delay the publication of a forthcoming paperback edition of his memoir, “You Don’t Have to Say You Love Me,” following a recent NPR report in which three women accused him of sexual misconduct ranging from inappropriate comments to unwanted advances. The American Indian Library Association withdrew an award that it gave to Mr. Alexie in 2008 for his young adult novel “The Absolutely True Diary of a Part-Time Indian.” Mr. Alexie also declined to accept the 2018 Andrew Carnegie Medal for nonfiction for his memoir, which was given to him last month by the American Library Association.

On his website, Mr. Alexie expressed regret for his actions but also sounded defiant, writing that he rejects “the accusations, insinuations and outright falsehoods” made by a woman he said he had a consensual affair with and who accused him online of being a serial predator.

Grove Atlantic and Hachette Book Group, which both publish Mr. Alexie’s books, issued statements saying that they were surprised and troubled by the accusations, but that they will continue to publish his earlier books. from the New York Times

I also think that the Society of Children’s Book Writers and Illustrators needs to be accountable for the role they played in creating a toxic environment that created a fertile hunting ground for sexual predators.

In an interview, Mr. Diaz acknowledged that he made flirtatious comments and advances at a conference hosted by the Society of Children’s Book Writers and Illustrators and that he had gone through harassment training after the society’s board received a complaint about his behavior in 2012. He also went through a probation period where his conduct was regularly reviewed. When a separate allegation arose in the fall of 2017 about a sexual comment that Mr. Diaz made to a woman at a conference five years earlier, before his harassment training, Mr. Diaz voluntarily resigned from the board and apologized to the woman who made the complaint. from the New York Times

Other publishers have issued bland statements — or taken no action at all. Henry Holt & Company has continued to publish Bill O’Reilly following a New York Times report that Mr. O’Reilly settled claims by multiple women who accused him of sexual harassment and verbal abuse. Mr. O’Reilly was fired by Fox News, and last fall, his literary agent, William Morris Endeavor, said it would “no longer represent Bill O’Reilly for future deals.” But Holt has so far remained steadfast in its support of Mr. O’Reilly, whose best-selling “Killing” series has more than 17 million copies in circulation. Its fall 2018 catalog lists an untitled book by Mr. O’Reilly. “The corporate stance is that it’s not our job to judge our authors,” Stephen Rubin, the president and publisher of Holt, told The Times in a recent interview. from the New York Times

It will be up to us, the bystanders who buy children’s and young adult books, if there is accountability. We hold the keys because we make the purchases. In this business, money talks.