I invited my guest author to respond today, Sandra Neil Wallace, on the Wall Street Journal Op Ed piece, “Reading From Left to Left at Barnes & Noble.” The author, Dave Seminara, objected to a book display of Inspiring Books to Empower Young Readers because it was too liberal. He writes:

Unless you lock your children in a screenless cave in Idaho, they’ll consume a steady diet of leftist dogma simply by exposure to American popular culture.

At Barnes & Noble the other day, my sons and I noticed a display called “Inspiring Books to Empower Young Readers.” The collection included “First Generation: 36 Trailblazing Immigrants and Refugees Who Make America Great,” which lionizes, among others, Univision anchorman Jorge Ramos and the first fashion model to wear a hijab.

Liberals are devoted to diversity, but they define it in a peculiar way—obsessing over race, sex and sexual orientation while demanding conformity of thought. The folks who put together the Barnes & Noble display probably never considered that there are literate Americans who wish to expose their children to ideas outside the liberal orthodoxy.

Growing up, I basked in my grandmother’s love—she fed me bowls of breadcrumbs dipped in coffee for breakfast. And there was the rhythmical laughter of my great-grandmother, always dressed in black and speaking a language I couldn’t understand as she fussed over the noodle dough rolled onto the kitchen table, laughing as flour powdered my hair. Then I went to school, where my friends ate Fruit Loops for breakfast and there weren’t grandmothers or great-grandmothers like mine in the books we read. Soon I stopped talking about my family.

arted writing about my first-generation background, beginning with a collective biography co-written with my husband Rich Wallace called First Generation: 36 Trailblazing Immigrants and Refugees Who Make America Great. (School Library Journal interviewed us about the book here.) Exploring my mother’s refugee past as a child of war and embracing my grandmother’s resilience surviving concentration camps has been an awakening, helping me understand how this shaped my growing-up years and my conflicted identity, and igniting in me a groundswell of empathy for today’s newcomers to America.

It’s also re-acquainted me with hate. Since writing First Generation, Rich and I have been trolled on social media, and recently, The Wall Street Journal targeted our book in a piece titled “Reading From Left to Left at Barnes & Noble.” (Wall Street Journal op ed on First Generation) Concerned that a national bookseller’s display featured “Inspiring Books to Empower Young Readers,” it proceeded to skewer these inclusive children’s books, especially those about migrant families, asylum seekers, and immigrants and refugees, labeling the books as political propaganda. The display included memoirs by Reyna Grande and Malala Yousafzai, and also First Generation, which the writer, David Seminara, singled out. I expected to ignore this negative press, just like I did decades ago. But the piece wasn’t solely attacking us or our work, it was discounting a marginalized group of people who we have deep respect for. That’s why the article stuck with us. So did the writer’s name.

Digging deeper into his background, what I discovered sounded the alarm. The Wall Street Journal failed to disclose that Seminara is also the lead columnist for CIS—Center for Immigration Studies—an anti-immigrant website which is on the Southern Poverty Law Center’s Hate Watch list because of its ties to white nationalist groups. 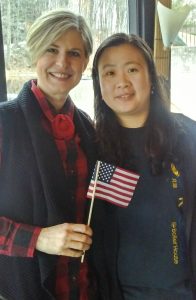 On the same day I was celebrating my second-year birthday as a US citizen with my friend Li Qin, who’d been sworn in beside me—Seminara was busy filing two stories: first, voicing his disdain that our book features Somali refugee and barrier-breaking hijabi model Halima Aden, then posting a column for CIS disparaging asylum-seeking families by labeling their dangerous lives as the “strollers-and-moms-fleeing-violence narrative.”

It became obvious at that moment what Seminara’s column was really about: discrediting inclusive children’s books by labeling them as political propaganda to deflect and avoid conversations about the humanity of newcomers.

I see this as a dangerous trend in mainstream media and–unlike my days as a sports journalist twenty years ago when I faced gender discrimination–this time I’m unwilling to be quiet about it. Because The Wall Street Journal isn’t alone. The Atlantic also recently ran a column interviewing booksellers and scholars about what it called “progressive” picture books in an article titled “The Radicalization of Bedtime Stories.” Here too, columnist Joe Pinsker ultimately categorized the narratives of marginalized groups under a political umbrella.

Julia Guthrie, fourth-grade teacher and New Jersey’s Non-Public Teacher of the Year, took notice. “There seems to be this fear that our students will somehow be radicalized by books that share the amazing accomplishments of immigrants. Radicalized to what? To view immigrants as people? As individuals with something to offer?”

School librarian Erinn Salge grew so concerned about the article in The Atlantic that she penned a blog post about it. “If scholars and booksellers yield to the idea that representing all people makes books more leftist, or inherently political,” Salge writes, “they close the doors on these narratives and their importance.”

Which is exactly what happened back in the 1970s and ’80s, when I was growing up. Books about newcomers were so few in number they were relegated to the special-interest shelves, signaling them as “different.” Now that there are more stories and they are finally being given an A-listing, there’s an attempt to discredit them by using a political argument to relegate them back to the “oddity” files.

Looking at the tone, language, and rhetoric of these articles also revealed to me something else that needs to be called out: Making positive, human qualities political if they’re attributed to asylum seekers, immigrants, and refugees is gaslighting and a cover-up for racism. And if we don’t speak out, the trend will continue to grow, our silence a signal that it’s okay to de-humanize people who are marginalized.

Miller gets an up-close look at their syllabuses and says that she hasn’t seen teachers promoting a political agenda in their classrooms. “I see educators trying to foster empathy and inclusion—to value the students in their classrooms and their families and teach children about the lives of people who do not look or live like them.” She stresses that this is exactly what education is supposed to do—“expand our knowledge and understanding beyond our own limited experiences.”

New Hampshire educator and immigrant Ritu Budakoti, who is the mother of two school-age children, also emphasizes the need for a broader outlook. “I think it’s our responsibility to raise our children with a worldview,” Budakoti told me over coffee–we’ve become friends since my citizenship ceremony. And she searches for books that support what she says will help her children “expand their context of the world,” especially stories about real-life role models that her kids can relate to and be inspired by.

And this is precisely what both The Wall Street Journal and The Atlantic articles failed to recognize: With nearly 14% of our population born in other countries, there are no two sides to whether or not children who have immigrated here deserve to have their stories told and celebrated. They unequivocally do. As Guthrie points out, “They have the same desire to see themselves represented as their peers who were born here.”

It’s why owner Kathy Burnette opened The Brain Lair, a bookstore in South Bend, Indiana, dedicated to titles featuring diversity that ignite imagination and foster empathy. “It’s hard for people to have empathy for others,” Burnette says, “if they don’t know anything about them.”

Within seconds of placing a copy of First Generation in her classroom, Guthrie says a young boy who had recently immigrated here snapped it up. “He literally could not believe that a book like this existed,” she explains. “I remember him clutching it to his chest and then eagerly devouring it back at his desk.” 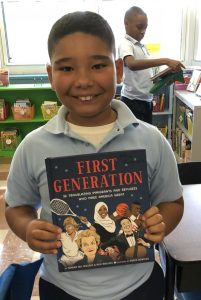 When reading her copy, Budakoti’s daughter “beamed with happiness” learning more about Indian-American business leader Indra Nooyi, while Budakoti’s six-year-old son became so fascinated reading about Croatia-born inventor Nikola Tesla, it prompted several trips to the library so he could begin making a blueprint for his own invention: a flying car.

Right now, the only flying I do is on airplanes, and I’m always struck by how– looking out an airplane window–human-made borders dividing cities, states, and countries are rarely seen from the sky. Perhaps this is the best point of view. And I have full faith in a six-year-old’s flying car becoming a reality and so hopeful of where it might take us, knowing that dreaming about it and designing it might not have been possible had he not seen himself in a book, and found a friend in an inventor from Croatia. 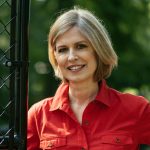 Sandra Neil Wallace is the daughter of a refugee and concentration camp survivor. The first-generation author broke a gender barrier in sports as the first woman to host an NHL broadcast on national TV. Her books for young readers also focus on people who break barriers and change the world. Sandra’s acclaimed titles have won the NCTE Orbis Pictus Award for Outstanding Nonfiction, the ILA Social Justice Award, and the Parents’ Choice Gold Award, and been selected as ALA Notable books, Booklist’s Editors’ Choice, and the New York Public Library’s Best Books for Kids. She is a founding-year member of the Keene (NH) Immigrant and Refugee Partnership and an advisor to the Cohen Center for Holocaust and Genocide Studies at Keene State College. Find her on Facebook, Twitter, and her website.