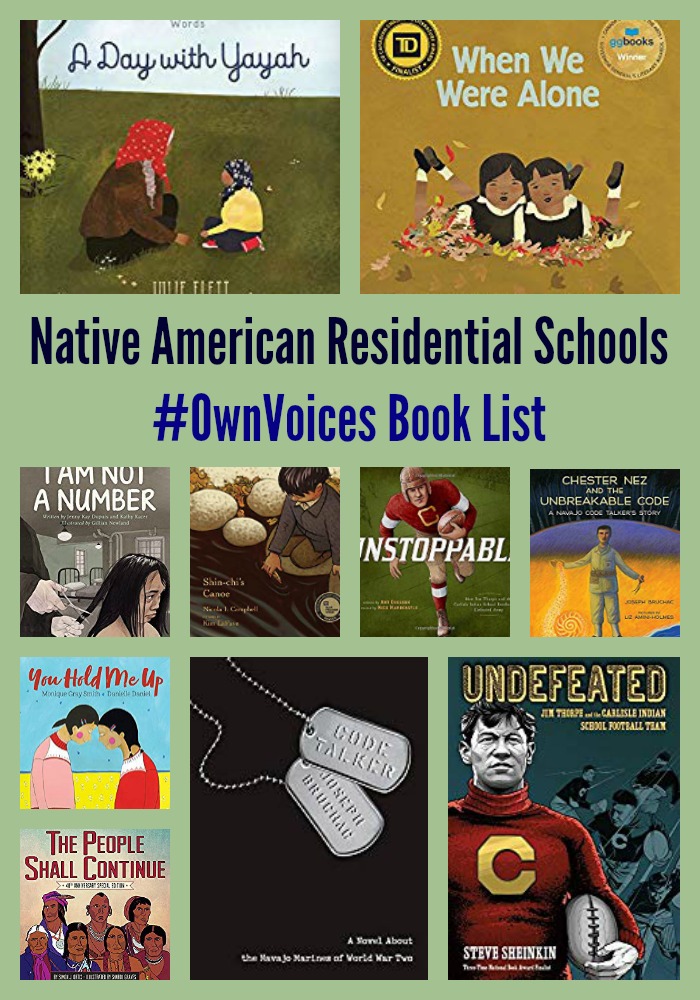 The recent family separation of some 14,000 children is not a new policy for the United States. Involuntary assimilation was a policy during the late 19th century when the U.S. and Canadian governments forced nearly 150,000 Native American and Indigenous children into Residential Schools reminiscent of Oliver Twist’s orphanage. In fact, the Residential Schools’ conditions were worse that Dicken’s fictitious infamous one.

“As part of this federal push for assimilation, boarding schools forbid Native American children from using their own languages and names, as well as from practicing their religion and culture. They were given new Anglo-American names, clothes, and haircuts, and told they must abandon their way of life because it was inferior to white people’s.” From History.com

“Though the schools left a devastating legacy, they failed to eradicate Native American cultures as they’d hoped. Later, the Navajo Code Talkers who helped the U.S. win World War II would reflect on the strange irony this forced assimilation had played in their lives.” From History.com

How ironic that the Native American culture that the government sought to suppress was a primary reason why America was not defeated by Japan during WWII.

This book list attempts to compile children’s books about the Residential Schools because if we don’t learn from our past, we will make the same mistakes again. What am I missing for this #OwnVoices book list? Thanks for your help!

p.s. Here’s a Christmas letter to Indian parents from a Canadian residential school highlighting the racism inherent in the system. Lance Albert of Saskatchewan, Canada shared a photo of a letter on Facebook from Kamloops Indian Residential School in Kamloops, British Columbia, dated November 18, 1948. This is from Upworthy:

Imagine having your kids forcibly taken from you, then being told that seeing them for the holidays was “a privilege.”

The reverend used the word “privilege” three times to describe parents simply getting to see their own children at their own expense. He threatens to hold their children hostage next Christmas if they don’t return them on time.

Add in the fact that many of the Native parents receiving this letter didn’t speak or read English, nor did they celebrate Christmas, and the arrogance and condescension in the letter grow even greater.

And again, this is modern history. My mom was a child when this letter was written, and I was born before Native parents in my own country had the legal right to say no to the government stealing their children. There are thousands of people living with the aftermath of these policies and practices, right here, right now.

It will be your privilege this year to have your children spend Christmas at home with you. The holidays will extend from DECEMBER 18th to JANUARY 3rd. This is a privilege which is being granted if you observe the following regulations of the Indian Department. 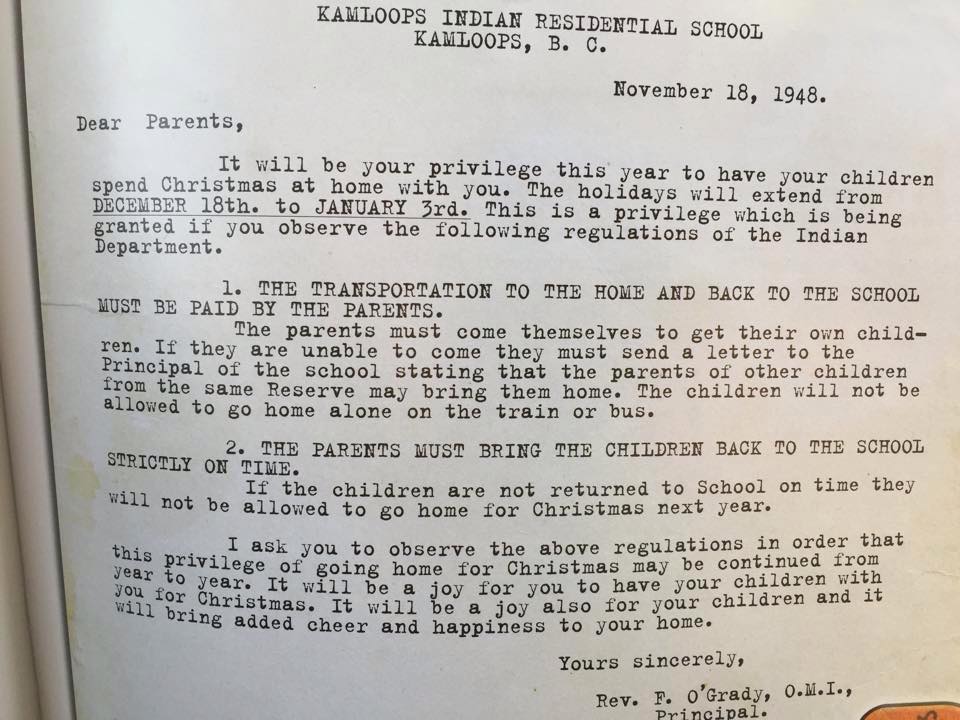 You Hold Me Up by Monique Gray Smith, illustrated by Danielle Daniel

“For over 150 years, Indigenous children (First Nations, Metis, and Inuit [from Canada]) [and Native American children] were taken from their families, communities, and cultures and placed in Residential Schools. At these schools, abuse was rampant. The children were separated from their siblings, forbidden to speak their own languages or practice their culture, often fed little or rotten food, and denied basic necessities.”

Written in the spirit of healing and reconciliation, Monique Gray Smith imparts a message of kindness and compassion in everyday living. Behind this message, she hopes to encourage dialogue between children and adults. These everyday moments of being together were denied those in Residential Schools. It makes these sweet images and words all the more impactful. The reality of Residential Schools is in the endnotes. The actual story is an uplifting one that doesn’t reference the Residential Schools at all. [picture book, ages 3 and up]

A Day with Yayah by Nicola I. Campbell, illustrations by Julie Flett

A family excursion with grandmother and her grandchildren, on the surface, looks like a pleasant outing outdoors, foraging for herbs and mushrooms. Yayah gently conveys her knowledge of the plant world, but also that these simple pleasures of speaking her language, growing her hair, spending time with her family, and celebrating her people’s culture were denied to her when she was forced to live in Residential Schools. The message is quiet and subtle so this is a good book for a very young child. [picture book, ages 4 and up]

When We Were Alone by David A. Robertson, illustrated by Julie Flett

When a young girl helps her grandmother in the garden, she learns about her grandmother’s residential school experience. Her grandmother gives a simple explanation for the small pleasures she now enjoys which were denied her then: wearing bright colors, having long hair, speaking Cree, and being with her family. While reflecting on a terrible time in history, the grandmother is a testament to Native American peoples’ strength of spirit and courage in finding empowerment through surviving a government-sponsored indoctrination program. [picture book, ages 6 and up]

The People Shall Continue by Simon J. Ortiz, illustrated by Sharol Graves

In broad strokes, this is the story of Indigenous peoples of the United States who continue to prevail despite attempts throughout history to eradicate their language, culture, and way of life. Written more than forty years ago, this story still resonates now more than ever. It’s both a history lesson, an anthem, and a promise. [picture book, ages 6 and up]

I Am Not A Number by Jenny Kay Dupuis and Kay Kacer, illustrated by Gillian Newland

This is Jenny Kay Dupuis’ grandmother’s true story of the abuse she faced as a child of the First Nations forced to move to residential schools. Both the United States and Canada had residential schools subjecting children to abuse, deprivation, and death. The schools were funded by the government and administered by Christian churches. [picture book, ages 7 and up]

Shin-chi’s Canoe by Nicola I. Campbell, illustrated by Kim LaFave

Separated at residential school, brother and sister Shi-si-setko and Shin-chi must wait for sockeye salmon which signals their return home. Food is an issue at school. While the teachers are well fed, the students were never given enough food. Shin-chi has a toy canoe carved by his father carefully hidden away. When it feels like he can’t take any more, he floats his toy in the river where it will make its way home. Finally, it’s time. When they return home, they find their father working on a dugout canoe for them. This is an unflinching portrait of a residential school that also captures the resiliency of the students. [picture book, ages 7 and up]

In 1929 when Betoli was 8-years-old, he had to leave his family to attend Residential Boarding School at Fort Defiance, a place where Navajos were held captive 70 years ago. Betoli, now renamed Chester, learned English and practiced Catholicism, as was required at school. Apparently separation of church and state did not apply at these government-funded schools. Chester decided to join the military when Japan attacked Pearl Harbor. Because he could remember his native Navajo language, he was asked to join an elite platoon charged with creating an unbreakable code. His work, along with twenty-nine other Navajo soldiers, helped win WWII. [picture book biography, ages 7 and up]

Chester Nez also wrote a memoir, Code Talker: The First and Only Memoir by One of the Orginal Navajo Code Talkers of WWII with Judith Avila.

This picture book is NOT RECOMMENDED because it casts an inappropriate fairy tale ending.

Carlisle Indian School was one of the residential boarding school created to “reeducate Native American children” by crushing their cultural heritage. Sports was one of the only ways to get privileges such as more food at these schools. Under Glenn “Pop” Warner, a white coach, the football team thrived. Jim Thorpe was one of the greatest athletes of his era, a multi-sport athlete, adept at track and field, baseball, and especially football. Both Jim’s Olympic experience at Decathlon and the Army versus Carlisle football game are detailed in this book, [advanced picture book biography, ages 7 and up]

*This is not an #OwnVoices book, but I include it because it is exceptionally well written and describes the inequities at Residential School between athletes, teachers, non-athlete students. It also casts light on Pop Warner and how he benefited from and exploited Jim Thorpe.

Jim Thorpe and the Carlisle Indian School Football Team is an astonishing underdog sports story―and more. It’s an unflinching look at the U.S. government’s violent persecution of Native Americans and the school that was designed to erase Indian cultures. Expertly told by three-time National Book Award finalist Steve Sheinkin, it’s the story of a group of young men who came together at that school, the overwhelming obstacles they faced both on and off the field, and their absolute refusal to accept defeat. [nonfiction chapter book, for ages 10 and up]

Code Talker: A Novel about the Navajo Marines of World War Two by Joseph Bruchac

A gifted storyteller and a descendant of the Abenaki people, Joseph Bruchac is a prolific author of more than 70 books.  Code Talkers is about the Navajo Marines, the unsung heroes, of World War II.  The Navajos both developed an unbreakable code (all other codes were broken by the Japanese) and risked their lives in battle to transmit messages that used their native language.

In the Code Talker teacher discussion guide: “As a boy, Navajo tribal member Ned Begay attends an American-run boarding school, where he discovers that speaking the Navajo (Diné) language is forbidden. Students who are caught speaking it are punished, and in time some lose their ability to speak Navajo.” [young adult, ages 12 and up] 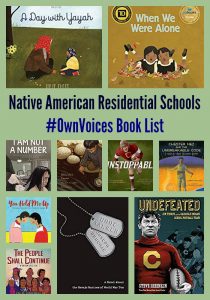