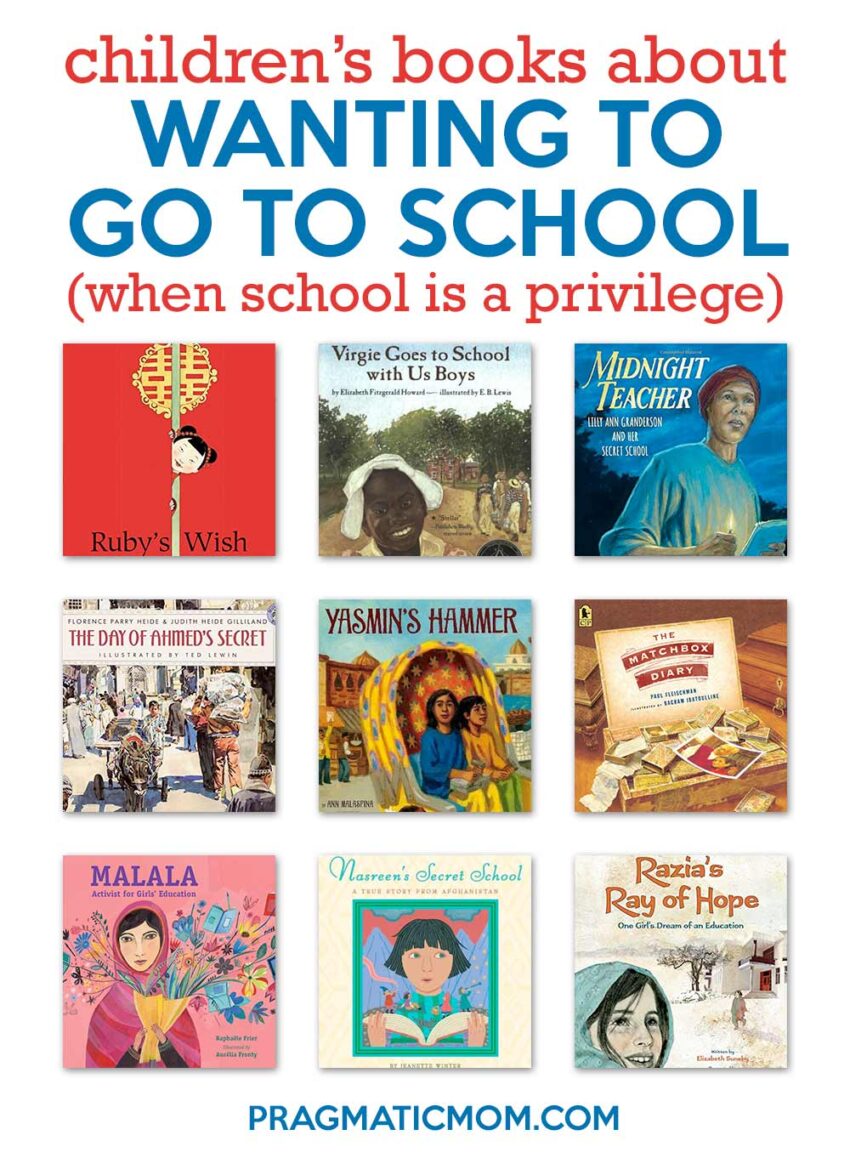 Author Patricia Newman and I are collaborating today on a list of books of kids who desperately want to attend school, but it’s not a given where they live. We will start off with some background and a list that Patricia Newman created for the Today Parenting Team. Her article is “All Kids Go To School, Right?”

This resource is a great discussion guide for raising global citizens. She also includes a fiction and nonfiction book list. I’ve used her list as an inspiration for my book list below. These books show a range of reasons why children aren’t able to attend school. While some of these true stories took place over a hundred years ago, conditions for others still have not changed.

Going to school is a privilege for the children in these books and for many children like them even today. I hope this list inspires readers to learn more about the world around them.

We are also giving away a copy of Patricia Newman’s book,  Neema’s Reason to Smile. Please fill out the Rafflecopter at the bottom to enter.

Set in Kenya, Neema dreams of going to school but she and her mother don’t have enough money to pay for her school uniform, paper, and pencils. Neema sells fruit and any extra money gets saved in a special basket, a Dream Basket. When she follows a girl to school, she gets to meet the teacher who works out a deal with her mother. Neema can finally go to school. Now, when Neema is on her way to school and sees another little girl with a fruit basket, she will pave the way.

This story is based on Jambo Jipya School based in Mtwapa, Kenya, which provides financial assistance for kids so that they can attend school. A former teacher at Jambo Jipya School started ReasonToSmile.org which raises money for food, books, and more modern classrooms. [picture book, ages 4 and up]

Wanting To Go To School Books: When School is a Privilege

Ruby’s grandfather had over one hundred grandchildren so it made sense that he hired a teacher and set up a school in his large home. Anyone who was interested could attend classes. In old China, allowing girls to get an education was unusual. Ruby excelled at school, but she had to work much harder since she had to learn about cooking, sewing, and cleaning the house as well. As Ruby got older and thought only this would be her last Chinese New Year’s celebration at home as she was old enough to get married, her grandfather surprised her. Inside the red good luck envelope, he gave her wasn’t money. It was an acceptance to university for Ruby.

This is the author’s own grandmother’s story, set during 19th century China. It seems like a long time ago, but compare this to the timeframe of Virgie Goes To School With Us Boys. [picture book, ages 4 and up]

Virgie Goes to School With Us Boys by  Elizabeth Fitzgerald Howard, illustrated by E.B. Lewis*

Picture books can teach history. With a double lesson of the Reconstruction era and the end of slavery, Virgie, a girl, is allowed to attend school despite objections from her brothers that it’s too far for her or that girls don’t need school. They are all going to learn to live free. [picture book, ages 5 and up]

Lilly Ann Granderson bravely ran a secret midnight school teaching, over time, hundreds of enslaved people how to read and write. Getting caught meant 39 lashes for both teacher and pupils. Based on a true story, this is an inspiring testament to the human spirit and to a pioneer in education. [picture book, ages 4 and up]

This is one of my favorite books and an important book to expose children to so that they can understand how other children live around the world. Ahmed is a young boy living in Cairo whose job is to deliver canisters of butane gas using his donkey cart. He has a special secret: today he has learned to write his name in Arabic. This is a good book for discussion that other children around the world don’t have the ability to go to school because they have to earn money for their family and how important an education is. [picture book, ages 4 and up]

In Bangladesh, a cyclone hits Yasmin’s village and her home and rice paddy are destroyed. Her family walks for many days with what they can carry to start over in the city. Yasmin and her younger sister must work smashing bricks to made into cement instead of going to school. Her father pedals a rickshaw and her mother cleans houses but this is still not enough money to let the girls quit their jobs and attend school. Yasmin decides to work with renewed vigor and earns a few extra coins. With this money, she buys a book. It’s a simple picture book with one word and one picture. Her family looks at it that night. No one can read the words. The family works harder than ever, and soon, very soon, it will be time for the girls to go to school. [picture book, ages 4 and up]

The Matchbox Diary by Paul Fleischman, illustrated by Bagram Ibatoulline

All this time, I thought Malala was born and raised in Afghanistan where the Taliban ruled oppressively. In fact, this is Pakistan and the fateful day that Malala is shot is October 2, 2012. This book does a really nice job covering Malala’s life and explaining what happened to her family and those around her during this shifting political time period. She continues to fight for the right of every child to go to school. She was just 12 when she declared publicly that girls’ have a right to an education.  [advanced picture book, ages 6 and up]

This is a 2-for-1 book with two stories built into the book. Read it one way and then flip the book for the second story. Iqbal was indentured at four-years-old to because of a $12 loan his parents can not repay. He works all day in the dim light of a factory hand-knotting rugs. When he is 10-years-old, he discovers that Peshgi (indenturing children for loans) has been outlawed and all loans are forgiven. He uses his newfound freedom to let all the children in the dark factories know, spreading this message to thousands of children. He is killed for his activism. He is just 12-years-old.

Malala’s story in this book starts with the Taliban fighter looking into the school van, trying to identify her. Malala is targeted because she dares to speak out for the right of girls to get an education. Like Iqbal, she is shot, but she survives. Malala and Iqbal are two examples of young activists who fought on behalf of children. [picture book, ages 6 and up]

Malala Yousafzai received the Nobel Peace Prize in 2014 for her struggle against the suppression of children and young people and for the right of all children to education. She is the youngest Nobel Peace Prize winner, winning at age 17. Her story includes the bravery of her father, Ziauddin Yousafzai, who believed girls deserved the same educational opportunities as girls. Malala blogged for the BBC about the school closings in Pakistan. It was an act of defiance that would have violent repercussions, but nothing would stop Malala from advocating for education for girls. She is the voice for equal education for children everywhere. [picture book, ages 8 and up]

In Afghanistan, after the Taliban take over, girls are not allowed to go to school.  Nasreen’s father is taken away, and her mother leaves also to find her husband. Nasreen is alone with her grandmother and won’t say a word. Her grandmother who grew up when Afghanistan was different, takes her to a secret school for girls. And it is here, that Nasreen speaks again. The knowledge that she is learning, opening a window for her. Still, she and her grandmother wait for her father and mother to return. Insha’Allah. [picture book, ages 6 and up]

Razia’s Ray of Hope: One Girl’s Dream of an Education by Elizabeth Suneby, illustrated by Suana Verelst

Razia Jan is an Afghan native who Global Citizen describes as “the woman who started a school in one of the worst places to be a girl.” She won a CNN Hero Award, given to ordinary people who do extraordinary things. This is her story about building a school for girls in Afghanistan in a poor, highly illiterate, conservative area where girls had never been allowed to go to school. Razia convinced the village elders to let her build a free, private K – 12 girls school and now more than 600 girls are studying Dari, English, math, science, history, computers, and the Koran. [picture book, ages 8 and up]

We are also giving away a copy of Patricia Newman’s book,  Neema’s Reason to Smile. Please fill out the Rafflecopter below to enter. We can only ship to U.S. addresses. 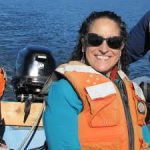 Patricia Newman’s award-winning books show kids how their actions can ripple around the world. Author of the Robert F. Sibert Honor Book Sea Otter Heroes: The Predators That Saved an Ecosystem; as well as Zoo Scientists to the Rescue, a Bank Street College of Education Best Children’s Book; Green Earth Book Award winner Plastic, Ahoy! Investigating the Great Pacific Garbage Patch; Booklist Editor’s Choice title Ebola: Fears and Facts; and picture book Neema’s Reason to Smile, Newman hopes to empower kids to think about the adults they’d like to become. Visit her at her website. 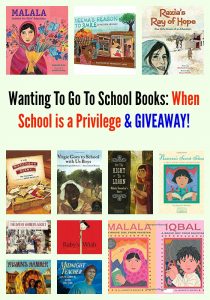 10 thoughts on “Wanting To Go To School Books: When School is a Privilege & GIVEAWAY!”