In honor of my oldest daughter who will be heading to art school after gap year, I’m celebrating photographers in picture books. My daughter has been the force behind the photography of indigo clothing co., a company she started with her younger sister. 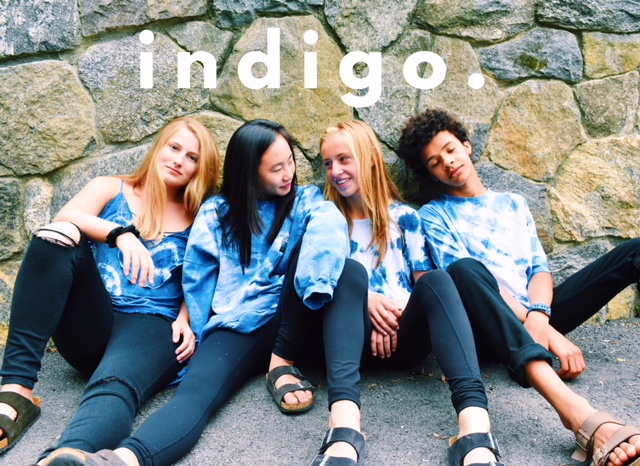 There is nothing like trial by fire to learn photography. She started out using the autofocus feature of her camera and took this shot which reminds me of old United Colors of Benetton ads. 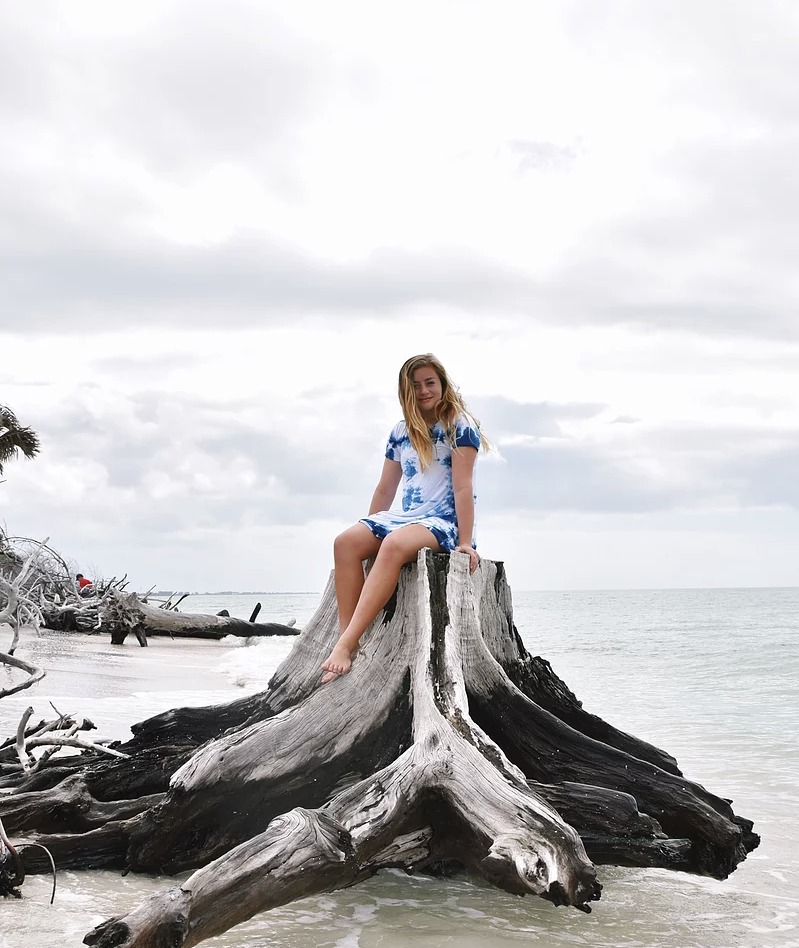 Over the past year, she’s progressed to a better camera and learned how to adjust the aperture and shutter speed. Her goal is not just to capture the clothes, but evoke a sense of place, season, and laid-back style. 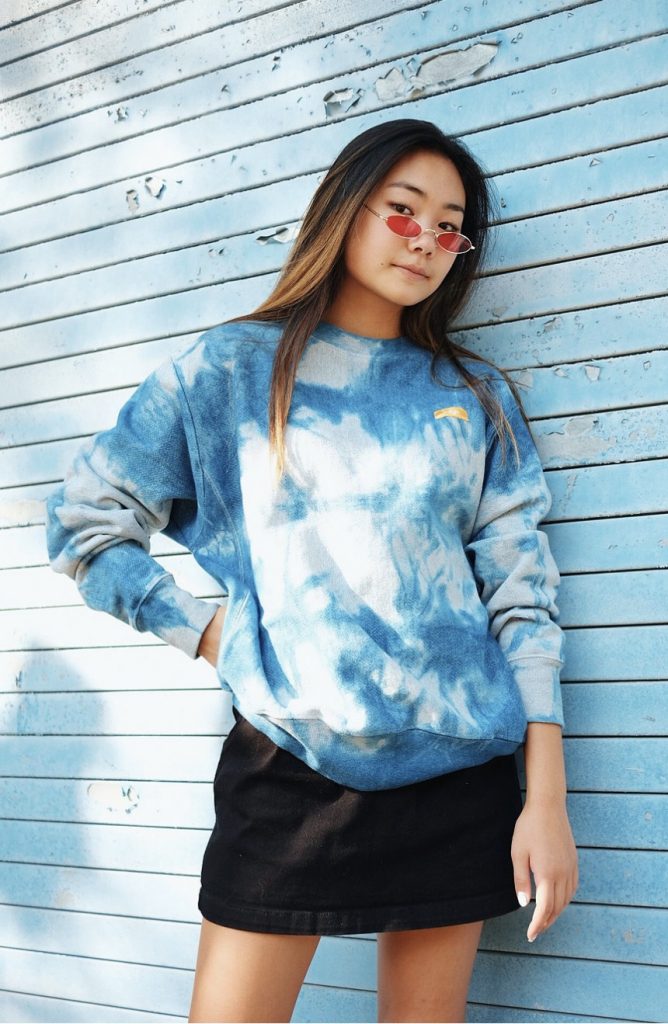 Like many of the photographers featured in this list, my daughter is largely self-taught. I had her check out Polka Dot Parade: A Book About Bill Cunningham, a photographer that I thought she could relate to. The book caught her fancy. Not only is photographer Bill Cunningham a pioneer of street-style photography, but the illustrations, to her, capture the whimsy of haute couture.

I am giving away a copy of Polka Dot Parade: A Book About Bill Cunningham by Deborah Blumenthal, illustrated by Masha D’Yans. To enter, please fill out the Rafflecopter at the bottom.

What books am I missing? Thanks for your help in adding to this list!

Take a Picture of Me, James VanDerZee! by Andrea J. Loney, illustrated by Keith Mallett

Like the small moments that James VanDerZee captured beautifully with his photographic portraits, this picture book biography captures the dignity and creative passion of this lesser known photographer from the Harlem Renaissance. That he is not well known speaks to the racism that limited his career, but within these restrictions, VanDerZee produced the most comprehensive photographic documentation of Harlem.

Born in Lenox, Massachusetts and relocating to Harlem when he was 18, James’ passion for photography began at an early age. His gift was in capturing what was special in each subject, taking time to get each person relaxed and at his best. He also was masterful in the darkroom with touch-ups. His work was finally recognized in a show by a larger audience at the Metropolitan Museum of Art, Harlem on My Mind. Illustrator Keith Mallett attended the original Harlem on My Mind exhibit, bringing this book full circle. View more of VanDerZee’s portraits here. [picture book biography, ages 4 and up] 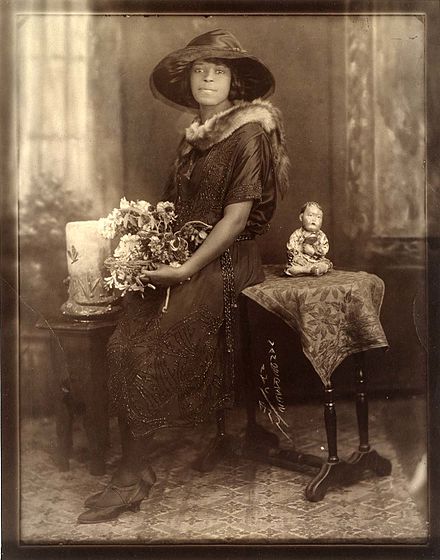 “Evening Attire,” 1922, by James VanDerZee, in the collection of the Smithsonian American Art Museum

Jazz Day: The Making of a Famous Photograph by Roxane Orgill, illustrated by Francis Vallejo

Some of the 57 musicians featured in the photograph lived in Harlem including:

Duke Ellington– composer, pianist and bandleader; lived on Riverside Drive and at 555 Edgecombe. 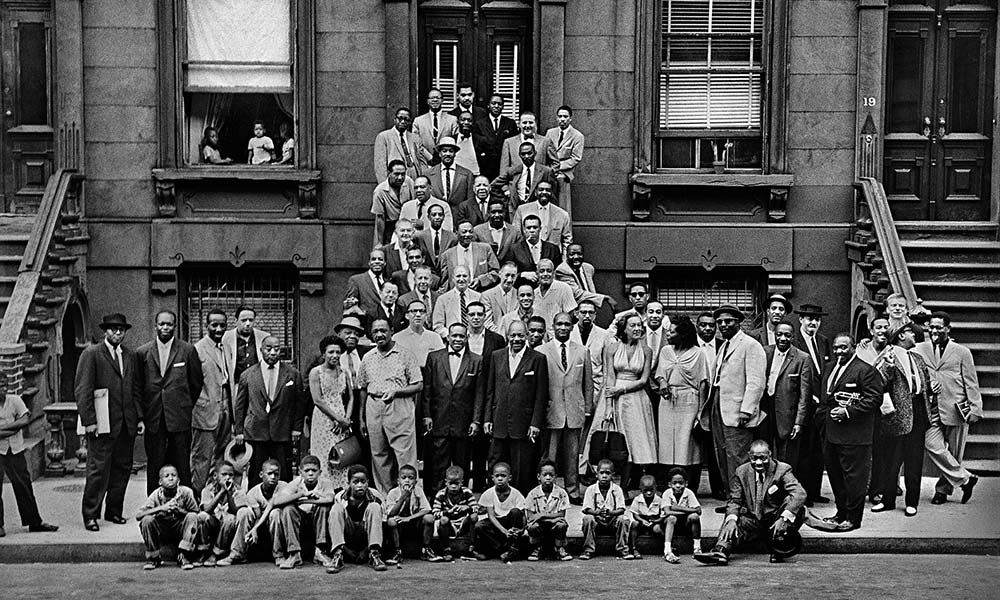 A Great Day In Harlem: The Most Amazing Photograph In Jazz history. Photo by Esquire Magazine. 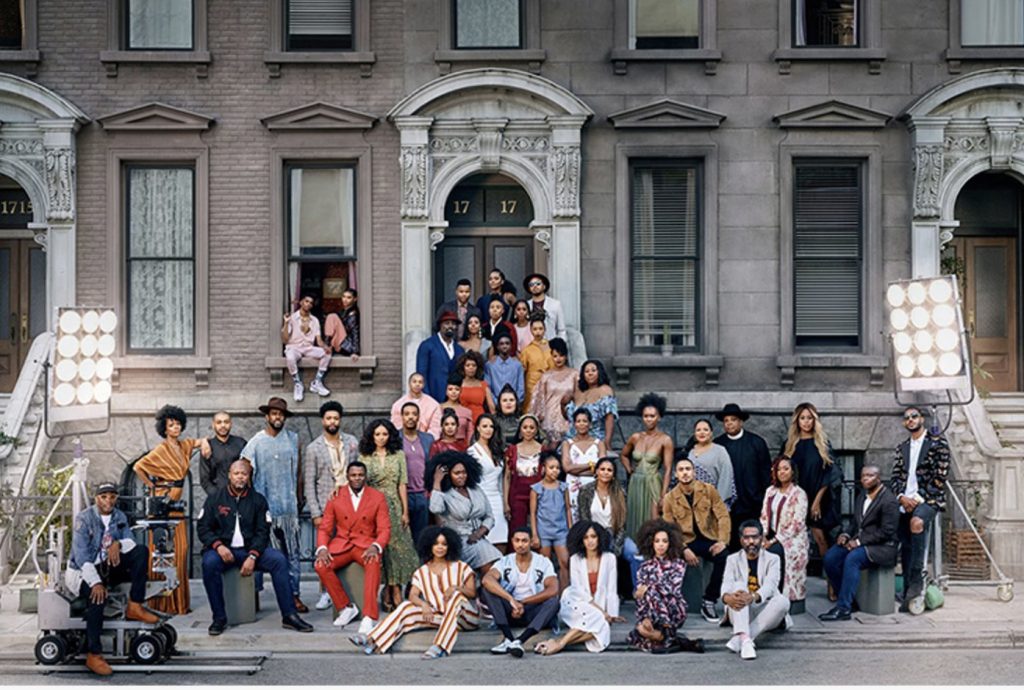 Dorothea Lange: The Photographer Who Found the Faces of the Depression by Carole Boston Weatherford, illustrated by Sarah Green

Dorothea Lange had childhood polio which left her with a limp, but also a sense of empathy that shaped her view from behind the camera. Her famous photo of a migrant mother and her kids has a backstory: the family was stranded and starving after rains had destroyed the pea crop. Dorothea’s powerful image was published in the newspaper, and then the government rushed ten tons of food to the camp. Lange captured powerful images of The Great Depression and Japanese Americans in internment camps. She also documented the conference that created the United Nations. Read this inspiring picture book biography that shows the power of art in the fight for social justice. [picture book, ages 5 and up] 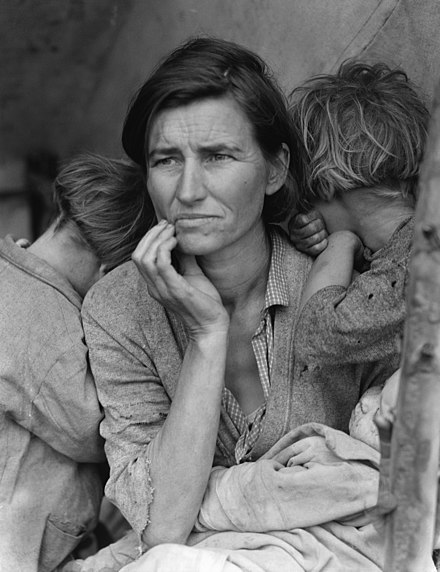 Dorothea’s Eyes: Dorothea Lange Photographs the Truth by Barb Rosenstock, illustrated by Gerard Dubois
When Dorothea was seven, she contracted polio which affected her right leg. Her mother wants her to hide her disability, and she learns to be invisible. After her father leaves the family, Dorothea is the only white girl in a school of Jewish immigrants. Again, she learns to blend in, invisible, seeing the crowded tenements with her eyes and heart. She decides to become a photographer, discovering her love for taking portraits. When the Great Depression hits, Dorethea’s skill of blending in and her empathy for the poor results in documentary photographs that both define this era and convince the government to provide aid to those suffering. Her eye behind the lens helps those who view her photographs to see with their hearts. [picture book biography, ages 8 and up] 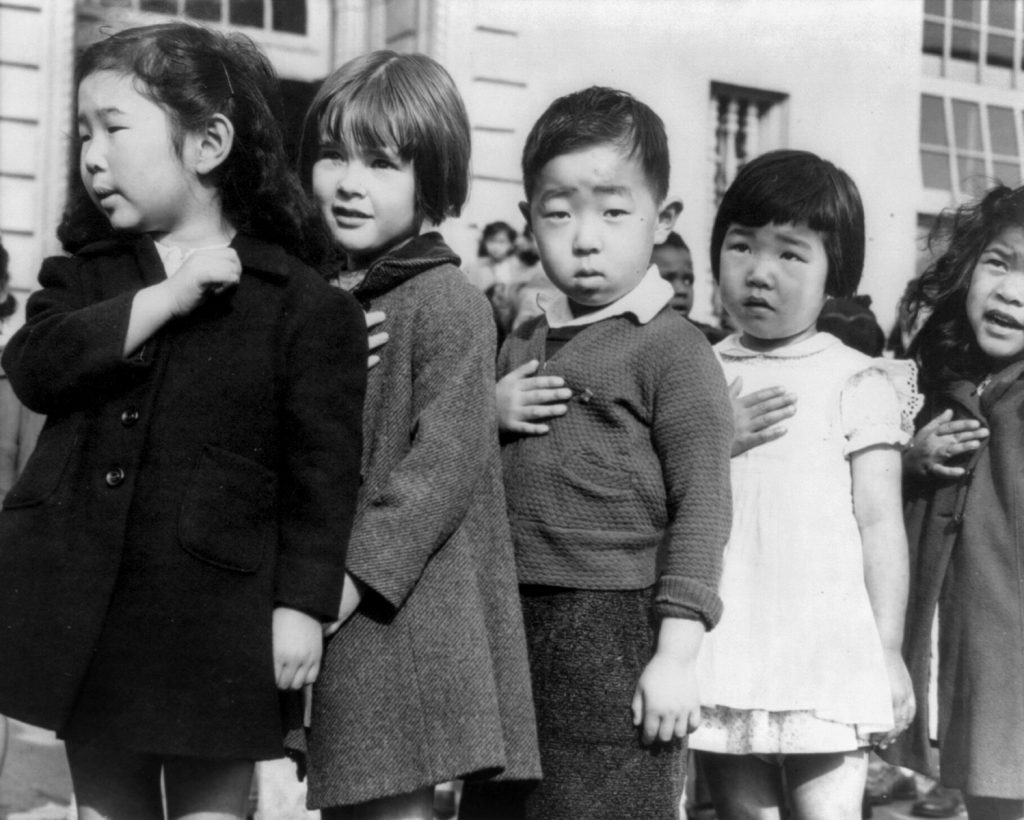 Children at the Weill public school in San Francisco pledge allegiance to the American flag in April 1942, prior to the internment of Japanese Americans. Photograph by Dorothea Lange.

Dorothea Lange and Ansel Adams were both photographers who documented Japanese Internment Camps during WWII but with different points of view. Her photographs were suppressed by the U.S. government who commissioned them. When the war ended, the army quietly placed in the in the National Archives. Against the political mood of the time, Lange’s photos “unequivocally denounce an unjustified, unnecessary, and racist policy.” She was one of a handful of white people compelled to speak out and used her photographs to tell the story from the perspective of the internees. Her original captions for each photo are preserved in this compendium. [nonfiction adult, ages 16 and up] 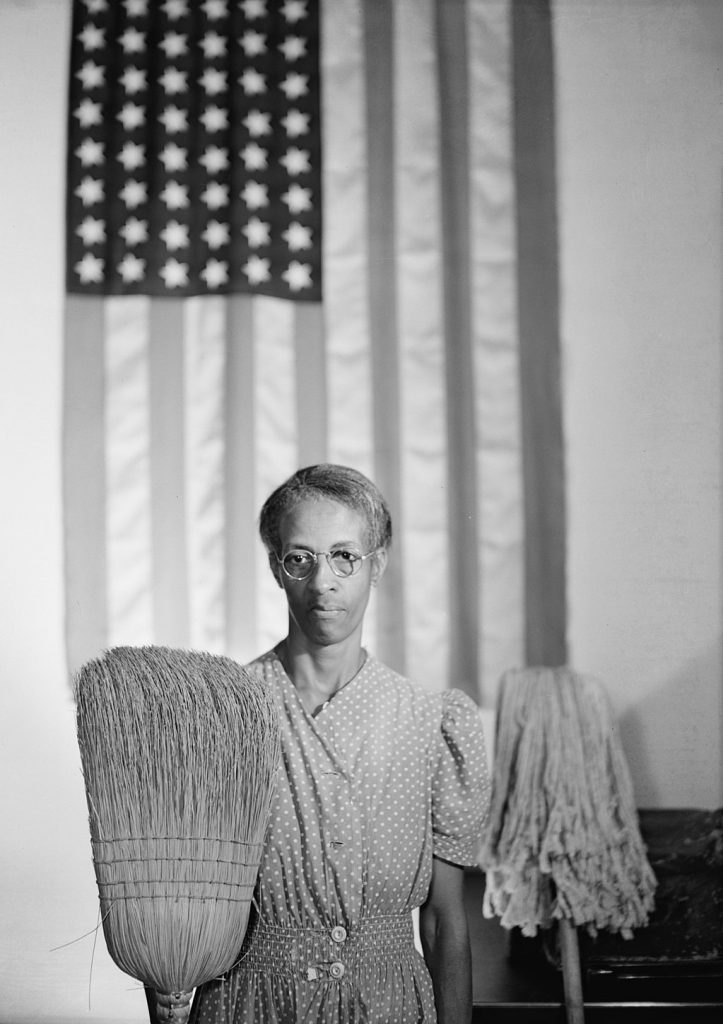 “He who seeks beauty will find it.” Bill Cunningham

Bill Cunningham captured New York City street style before it became a thing on Instagram. His photos told stories about the people wearing the clothes and the times that they lived in. Riding around on a bicycle in his iconic blue French worker’s jacket, he always had a camera on him to capture fashion pioneers both on the runway, at fancy parties, and on the street. His work, which he considered fun, kept him busy until his death at age eighty-seven. [picture book biography, ages 4 and up] 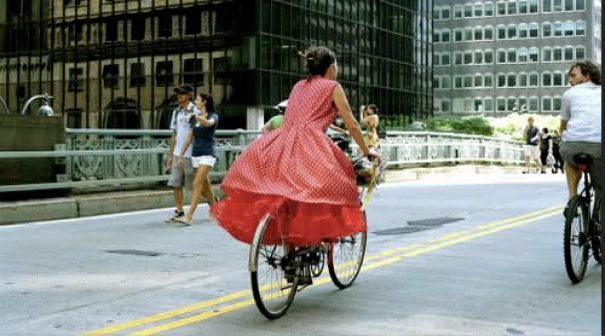 Born of privilege and quite possibly undiagnosed ADHD, Ansel Adams had trouble focusing and sitting still. Miserable in school, his father homeschooled him, letting him learn piano, foreign languages, and explore the outdoors. When he was fourteen, he begged to take a trip to Yosemite, two days away. His family gifted him a camera during that trip, and Ansel went everywhere, documenting his hikes. He met and married Virginia Best who lived in Yosemite. Ansel’s photographs soon became famous and his work in high demand. His photographs depicted the grandeur of nature, inspiring viewers to visit and preserve these wild and beautiful places. [picture book, ages 5 and up] 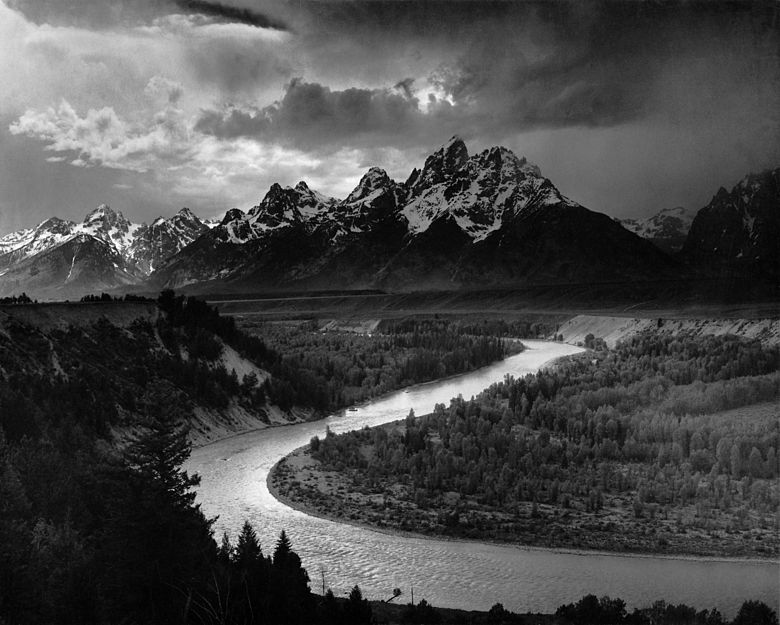 Ansel Adams, The Tetons and the Snake River (1942)

This book begins with photographs from 14-year-old Ansel’s trip to Yosemite and progresses by location and timeframe to different phases of Ansel Adam’s career. 400 stunning photographs in all, this collection of photographs is meant to capture his legendary photographic career capturing American landscapes. [photography adult book, ages 8 and up]

This Is My Eye: A New York Story by Neela Vaswani

Through Neela Vaswani’s lens, she creates a loving portrait of her New York City, narrated by her 9-year-old “younger self.” She explores shapes, colors, patterns, and people of New York with a viewpoint that lets everyone into her world where she notices the small miracles all around her. [picture book, ages 4 and up]

Be a Super Awesome Photographer: 20 photo challenges inspired by the masters by Henry Carroll

This is the perfect book to hand to a budding photographer. Instead of bogging them down with technical details that might turn them off, this book presents a series of fun photographic challenges and through this, kids learn how to take great photographs. It’s not so much aperture and f-stop as much as it is capturing what you want and learning to compose a great photograph. This is a really nicely done kid-friendly fun book! [nonfiction, ages 7 and up]

Imogen: the mother of three boys by Amy Novesky, illustrated by Lisa Congdon

Review by The Nonfiction Detectives:

“Imogen Cunningham (1883-1976) is considered one of the finest photographers of the twentieth century. Born in Portland, Oregon, Imogen was named after a princess in a Shakespeare play, Cymbeline, but she didn’t expect life to be smooth and easy and beautiful.

Novesky’s picture book biography offers readers a glimpse into the life of Cunningham, who at 18 decided she wanted to be a photographer. She went to college where she studied chemistry and botany. (Chemistry was useful to know when developing your own photos). She read poetry. She was the only one in her family to graduate from a university.”

Imogen opened a shop in Seattle, made a name for herself as a portrait photographer, then married an etcher. In her author’s note, Novesky explains that women at the turn of the twentieth century were not expected to have a career. Their primary role was to focus on children and the home. “Imogen focused on her children and her home.” Called, “the mother of modernism and three boys, she photographed her three sons, and every afternoon, while they napped, Imogen photographed her flowers.” [nonfiction picture book, ages 4 and up]

“In the 1920s Imogen’s circle of protégés expanded, to include friendships with Maynard Dixon and Dorothea Lange, Edward Weston and his associates Johan Hagemeyer and Margrethe Mather. She discovered that the distillation of plant forms was also finding expression in the botanical photographs of Albert Renger-Patzsch, Ernst Fuhrmann and Karl Blossfeldt.” from Imogen Cunninham website 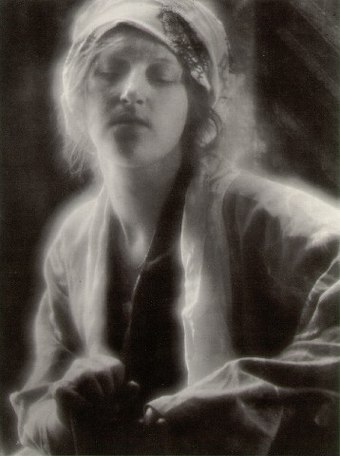 Dream, a 1910 photograph by Imogen Cunningham

I am giving away a copy of Polka Dot Parade: A Book About Bill Cunningham by Deborah Blumenthal, illustrated by Masha D’Yans. To enter, please fill out the Rafflecopter at the bottom.

To view any book at Amazon, please click on the image. 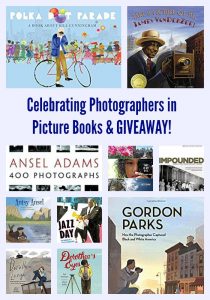