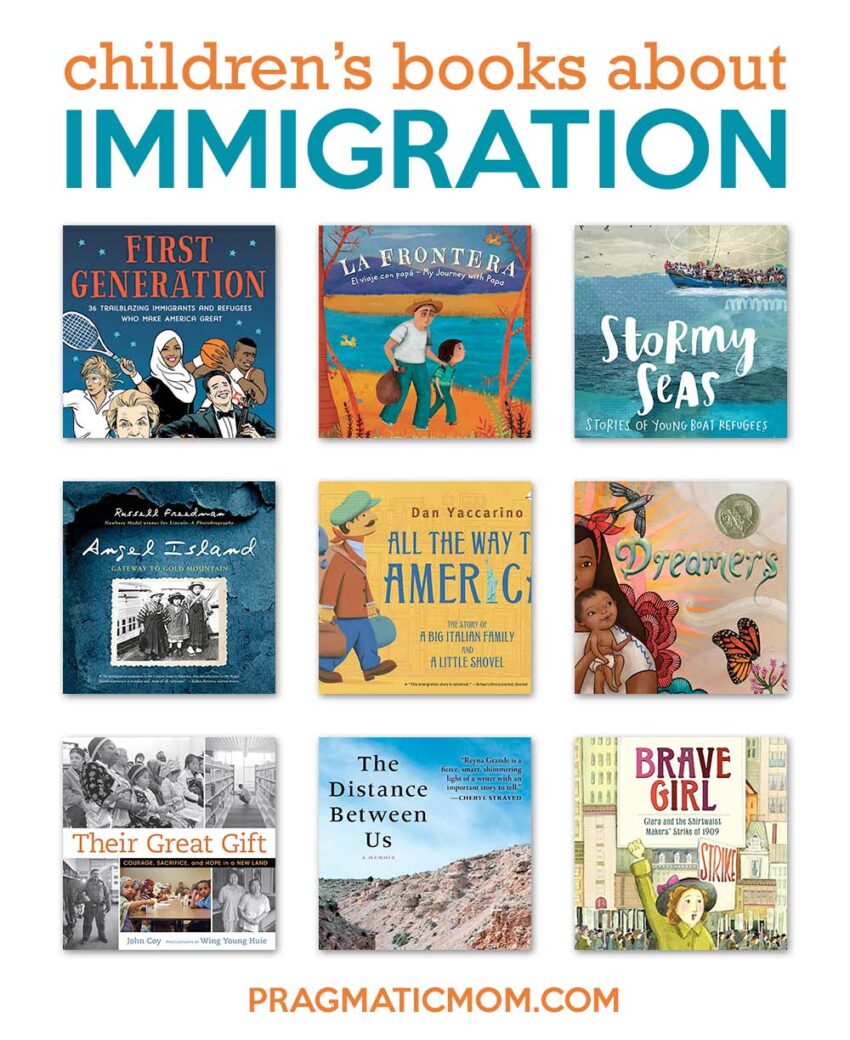 Please welcome author Sandra Neil Wallace with her 10 True Kidlit Immigration Stories book list. She was my guest earlier for her book Between the Lines: How Ernie Barnes Went from the Football Field to the Art Gallery and her book list on 10 Diverse Picture Books on Fine Artists. I’m thrilled to have her back!

We are giving away one copy of First Generations. Please fill out the Rafflecopter at the bottom to enter.

Thirteen percent of people living in America today were born in a different country—including me. But that doesn’t tell the human story. The following books certainly do. These ten true stories about immigrants and refugees–from the journey to a new country to creating a life in a new place–are fraught with danger but also filled with courage, resilience, and hope. They let young readers know why people become immigrants and refugees, the depths they reach to survive, and how we are all connected by the need to belong, to be loved, to be with family, and to find a purpose in life.

Books for Kids About the Journey

10. La Fontera/ The Border: El viaje con papá/ My Journey With Papa by Deborah Mills and Alfredo Alva and illustrations by Claudia Navarro

“Mama said, ‘You must be strong.’ … “We hid in the tall grass until it was truly dark.”

La Fontera is an immigration story for young readers that has stayed with me. It’s told in language that is urgent, honest, and real. I also love that La Fontera is a bilingual telling of Alfredo Alva’s story. In both Spanish and English, readers are immediately drawn into Alfredo’s life, following him as a young boy as he recounts in first-person the daring journey he took with his father, walking from Mexico to Texas in search of a better life. The experiences Alfredo describes are both harrowing and frightening, and illustrator Claudia Navarro’s luminous artwork aptly reflects emotions of sadness, courage and hope. The back matter brings us even closer to Alfredo’s life through photographs of him and his father. Several maps give context to immigration treks throughout the world. [picture book, age 5 and up]

“Our destiny, our future depends on this piece of wood.”

Focusing on five young people from different parts of the world and in different time periods, this survey book engulfs the reader at the moment the teenagers become refugees due to war or political dictatorships. Ruth (Germany), Phu (Vietnam), José (Cuba), Najeeba (Afghanistan), and Mohamed (Ivory Coast), endure harrowing journeys as they each escape by boat. While helpful stats and maps bring context to their stories, what makes Stormy Seas stand out are the photographs and the words of the teenagers themselves. [survey book, age 10 and up]

“It’s been seven weeks since my imprisonment on this island and still I do not know when I can land.”

The late Russell Freedman wrote about Asian immigrants arriving in the United States in the early 1900s through California’s Angel Island and how its immigration station housed them in detention centers where they waited months to be admitted into the country for good. Using the discovery of calligraphy etched in Chinese on an abandoned detention building that was uncovered by a state park ranger who is an immigrant, Freedman keeps this volume personal. He threads the lives of Chinese newcomers and later Japanese and European immigrants, with the history of the island and the tumultuous relationship it created with immigrants. [longform nonfiction, age 10 and up]

Books for Kids About A New Life

7. All the Way to America: The Story of a Big Italian Family and a Little Shovel by Dan Yaccarino

Author/illustrator Dan Yaccarino uses a lighthearted touch when narrating this heartwarming story of how his family arrived in America. The shovel his great-grandfather brought from Sorrento, Italy is woven throughout the story and passed down to and cherished by each generation. [picture book, age 5 and up]

“We are stories. We are two languages. We are lucha. We are resilience. We are hope.”

This gorgeously written and illustrated memoir by Mexican-American Caldecott Honor winner Yuyi Morales tells of her journey with her son to America to marry his American father. It quickly becomes a love story to the power of words—the luscious sounds they make in new languages and how they form stories in books found in libraries, where everyone can feel welcome and dream about possibilities in a new land. Each illustration is bursting with imagery and the books that became Yuyi’s anchors while navigating a new life and language and unfurling new artistic dreams. Happily, there is a Spanish edition, too. [picture book, age 4 and up]

5. Their Great Gift: Courage, Sacrifice, and Hope in a New Land by John Coy with photographs by Wing Young Huie

“My family came here from far away because they dreamed of more.”

Narrated from a child’s point of view and told with dignity, love, and admiration, this beautiful photo-driven picture book focuses on immigrant families and what their lives look like in 21st century America. [picture book, age 5 and up]

4. The Distance Between Us by Reyna Grande

“’Don’t ever think your parents don’t love you … it is because they love you very much that they have left.’”

Reyna Grande’s searing memoir, adapted for middle-grade readers, is beautifully written and both heartbreaking and hopeful. Reyna gives us a clear picture of her life in Mexico as a child living without parents. But her story of how she and her sibling survive after her parents make the dangerous trek across the border to find work in America is also about carving out dreams. It shows how family bonds can withstand hundreds of miles and years of separation when Reyna’s father finally returns to bring them to America and she starts a new life with her family.Most important is Reyna’s courage to find a way to live her dreams when family falls apart. [memoir, age 10 and up]

Books for Kids on Being Trailblazers

3. Brave Girl: Clara and the Shirtwaist Makers’ Strike of 1909 by Michelle Markel, illustrated by Melissa Sweet

“Clara knows in her bones what is right and what is wrong.”

Nothing stopped Clara–not the fact that she didn’t speak English when she arrived in New York from Ukraine, or that she barely had time to learn because she spent long hours making clothes in a factory. What translated loud and clear to Clara was the unfair treatment of women–most of them immigrants like her. Clara led the largest strike of women workers in the history of the country. And it worked! What I love about Michelle Markel’s biography on Clara Lemlich is how Clara’s bravery is conveyed in a way that young readers can be inspired and that it also has the added layer of demonstrating just how seriously immigrants take freedom and equality, and how willing they are–especially women—to defend it. [picture book biography, age 5 and up]

2. When Angels Sing: The Story of Rock Legend Carlos Santana by Michael Mahin and illustrated by José Ramirez

“You took the soul of the blues, and the brains of jazz, and the energy of rock and roll. And to that, you added the slow heat of Afro-Cuban drums.”

In this biography of music original Carlos Santana, author/musician Michael Mahin effortlessly weaves Carlos’s childhood in Mexico to his connection with American blues and the tug of war Carlos experiences in his new country when he journeys with his family to San Francisco. Forced to repeat a grade because he has yet to learn English, Carlos runs away, searching for his own sound and an outlet to thrive in America. With deliciously bouncy words that beg to be read aloud, Mahin describes how Carlos finally finds it when fusing all his strengths and cultural DNA with the American sounds he’s fallen in love with. [picture book biography, age 5 and up]

To enter to win a copy of First Generation, please fill out the Rafflecopter below. We can only ship to U.S. addresses.

Can you name ten role models who are immigrants or refugees? We couldn’t either. But by the time Rich and I were finished researching FIRST GENERATION, we had over 100 inspiring new Americans to choose from. While it’s important to understand how and why immigrants and refugees come to America and what their life is like here, it’s just as crucial to know the contributions they make to their new country. Kids deserve role models who are immigrants and refugees and most of the people in this collective biography elevate the daily lives of every kid in America. Now they’ll know who they are. [collective biography, age 8 and up] 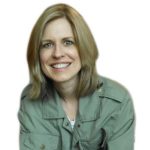 Sandra Neil Wallace became a US citizen in 2016 and is the daughter of a refugee and concentration camp survivor. The first-generation author broke a gender barrier in sports as the first woman to host an NHL broadcast on national TV. Her books for young readers also focus on people who break barriers and change the world. Sandra’s award-winning titles have been selected as ALA Notable books, Booklist’s Editors’ Choice, the Parents’ Choice Gold Award, and Kirkus Reviews Best Children’s Books of the Year. She continues to be an advocate for change in her community as a founding-year member of the Keene (NH) Immigrant and Refugee Partnership and an advisor to the Cohen Center for Holocaust and Genocide Studies at Keene State College. Find her on www.facebook.com/sandraneilwallace and Twitter @SandraNWallace and at www.sandraneilwallace.com 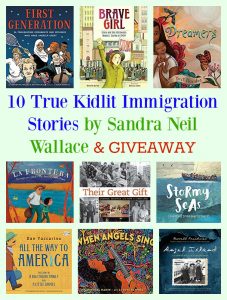 As an Amazon Affiliate, I earn from qualifying purchases.