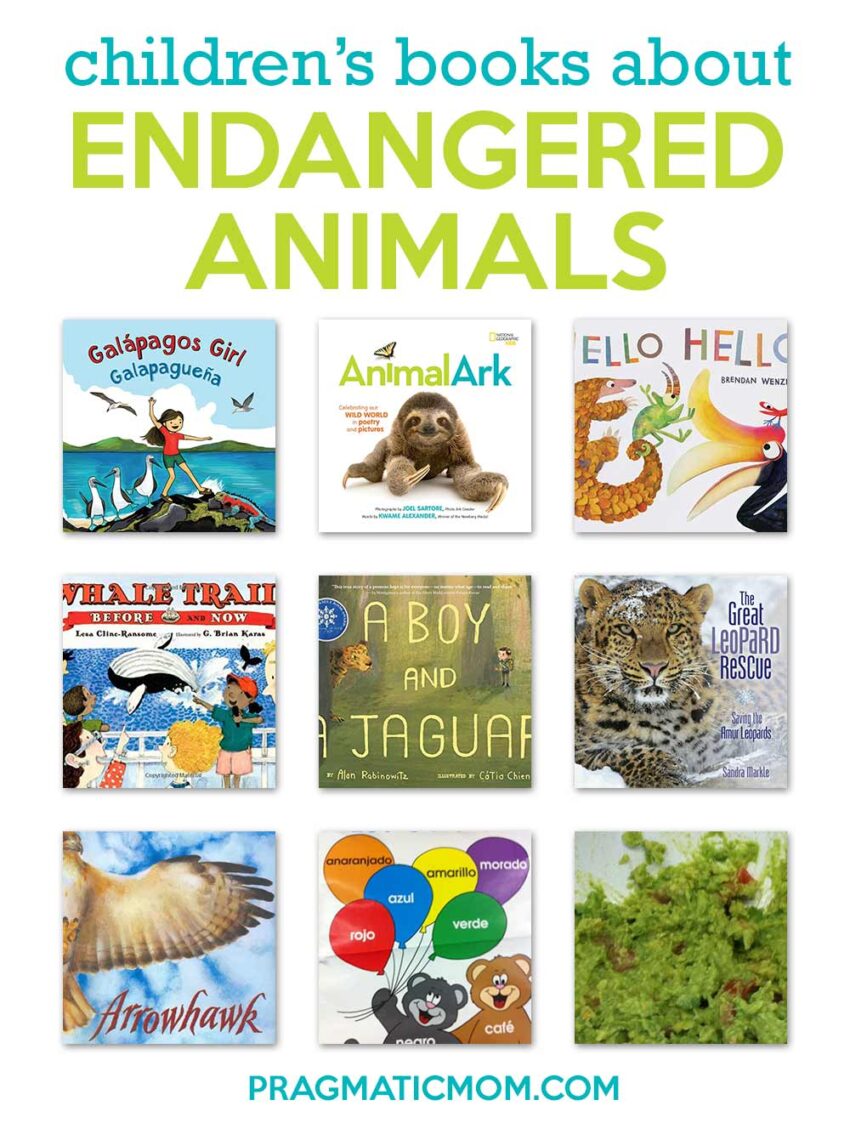 Based on the true story of Valentina Cruz who grew up as a Galapagueña, readers can explore the island as she did in this delightful bilingual Spanish/English story. While seemingly just playing, Valentina is also introducing readers to the wonders of the flora and fauna of the Galapagos Island.[picture book, ages 4 and up]

We are giving away 3 signed copies of Galápagos Girl! To enter, please fill out the Rafflecopter at the bottom. What are your favorite books about endangered animals or the natural world? Thanks for sharing!

Thank you, Mia, for celebrating my newest book, Galápagos Girl, by inviting me on your blog and with a three-book giveaway! As Galápagos Girl demonstrates, I’m passionate about wildlife, especially rare and/or endangered animals. What a memorable experience it was for me to visit the Galápagos to meet some of its unique creatures, many of which are at risk. I am so grateful to Valentina Cruz and the many scientists and conservationists who work tirelessly to ‘help keep them safe.’ 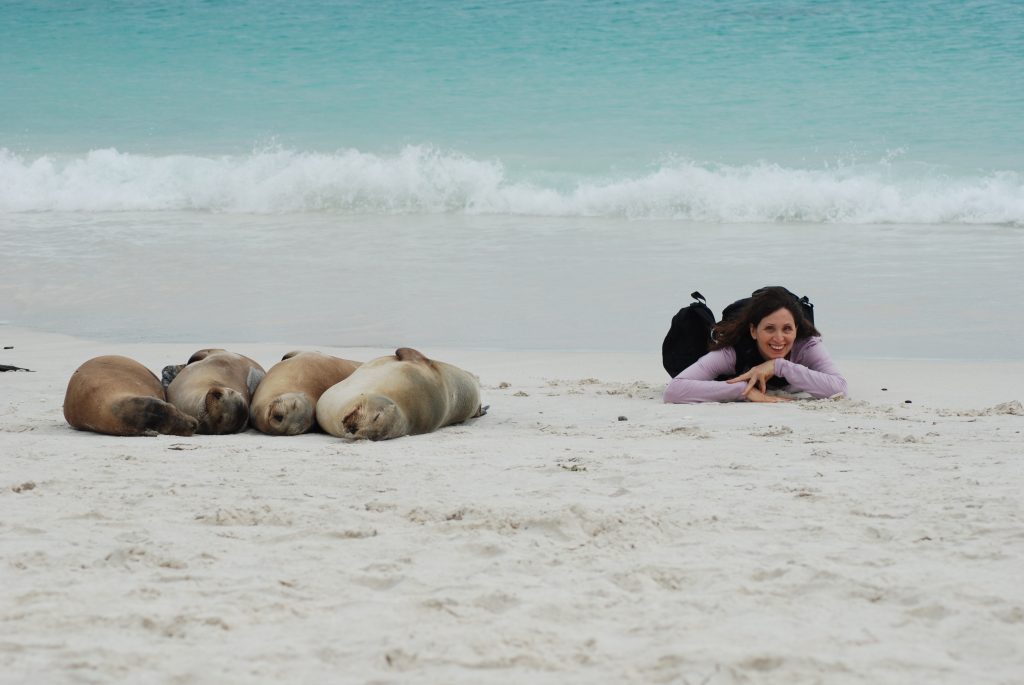 I’ve chosen ten titles about endangered animals for readers to enjoy, some new, some old, but all wonderful.

For years, I’ve been a fan of Joel Sartore’s beautiful and important wildlife photographs, the goal of which is to save species from extinction. Joel’s photographs combined with Newbery Medal winner Kwame Alexander’s exquisite haiku about the animals, most of which are endangered, make this book “perfection”. [picture book, for ages 4 and up]

What a joyful romp through the animal world, saying “hello” to creatures of all shapes, sizes, and colors. The author/illustrator of Hello Hello is an ardent conservationist and many of the creatures pictured are endangered, as an author note and list of animals with their conservation status shows.[picture book, for ages 3 and up]

Whale Trails Before and Now by Lesa Cline-Ransome, illustrated by G. Brian Karas

Narrated by a young girl helping her father lead a whale watching trip, the text moves between what is happening on their boat in real time to how humans viewed whales “Before Now,” demonstrating in an original way how human relationships with whales has evolved over centuries. I’m a whale watcher too, so especially appreciated this book. [picture book, for ages 5 and up]

A Boy and A Jaguar by Alan Rabinowitz, illustrated by Cátia Chien

A young boy (Alan Rabinowitz) is a stutterer, except when he’s talking to animals, like the jaguar in the Bronx Zoo. He became the first person to study jaguars and later spoke (without stuttering!) before the prime minister of Belize in their defense, leading to the world’s first and only jaguar preserve. I included this book because the author co-founded one of my favorite conservation groups, Panthera, devoted to the conservation of earth’s 40 wild cat species. Also, Alan Rabinowitz fulfilled his childhood promise to speak for animals, which is similar to Valentina, the young character in Galápagos Girl, who gave a promise to the animals in the story: “I will not forget you. And I will help to keep you safe.” [picture book, for ages 4 and up]

I chose this book as some consider the Amur Leopard to be the rarest big cat on Earth and because Sandra Markle always does thorough research for her non-fiction books.  It explains how the leopards’ population ended up at just thirty and how people around the world are working together to preserve them by protecting their habitat and through reintroduction programs. Included throughout are beautiful photographs and at the end an author’s note, timeline, glossary, and bibliography. [advanced nonfiction picture book, for ages 9 and up]

This book shows the strength and tenacity of an injured red-tailed hawk, surviving for eight weeks in the wild with a hunter’s arrow in its thigh! I love that the author and her fourth-grade class followed the news about this injured hawk and that she was inspired to share its story. [picture book, for ages 4 and up]

Slow Down for Manatees by Jim Arnosky

Such expressive illustrations in this fictional story, inspired by a manatee injured by a speeding boat. The reader follows its rescue, life in a

too-small tank surrounded by admirers, and eventual release with its newborn calf. Because I now live in Florida, near these gentle creatures, I included this book. Sadly, they are now not only threatened by fast motorists but by toxic algae – “red tide”. For ages 3 – 5.

Any list of books about endangered animals must include books by naturalist/author Jean Craighead George.  These two are especially wonderful as they were illustrated by Wendell Minor.

The Wolves Are Back by Jean Craighead George, paintings by Wendell Minor

I have long been a supporter of wolves and followed closely the reintroduction of wolves into Yellowstone National Park, so I especially love this book. In 1926, there were no wolves left in the lower forty-eight states due to them all being shot. In lyrical prose Jean portrays Yellowstone when “The wolves were gone,” then tells how the environment changed and came into balance again when “The wolves were back.” [nonfiction picture book, for ages 4 and up]

Because we’re celebrating Galápagos Girl’s book launch this month, the second Jean Craighead George/Wendell Minor book I selected had to be Galápagos George. We’re taken on a fantastic journey starting with Giantess George, a tortoise living in South America who, because of volcanic eruptions, finds herself in the ocean on a raft of floating trees, eventually landing in the Galápagos Islands. The story explains how Giantess George’s descendants evolved, how many became extinct, and how one descendant became known around the world – Lonesome George, the last of the Pinta Island tortoises, who died in 2012. [nonfiction picture book, for ages 4 and up]

I chose this stunning book partially because it came from the wonderful Lee & Low team, as did my new book, plus I’ve visited the setting of the book, beautiful Puerto Rico and El Yunque rainforest. Vertical collages across two pages take advantage of the story’s waterfalls, parrots in tall trees, and human activity below. The book tells not only the story of the near extinction and come-back of the Puerto Rican parrot, but also the history of Puerto Rico and how it impacted the parrots. [nonfiction picture book, for ages 6 and up]

We are giving away 3 signed copies of Galápagos Girl! To enter, please fill out the Rafflecopter below. We can only ship to U.S. addresses. 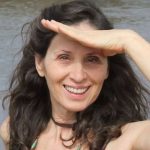 Marsha Diane Arnold was inspired to write Galápagos Girl after traveling to the Galápagos Islands, where she met Valentina Cruz and had the chance to swim with sea lions and penguins! Marsha is an award-winning picture-book author with over one million books sold. Her other books include Smithsonian Notable Book The Pumpkin Runner (Dial Books), Waiting for Snow (HMH) and Lost. Found.(Roaring Brook Press), a Jr. Library Guild Selection that received three starred reviews. She lives with her family in Alva, Florida. You can find her online on Facebook or blog and soon at marshadianearnold.com, her main site that’s being restored. 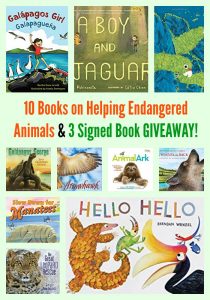