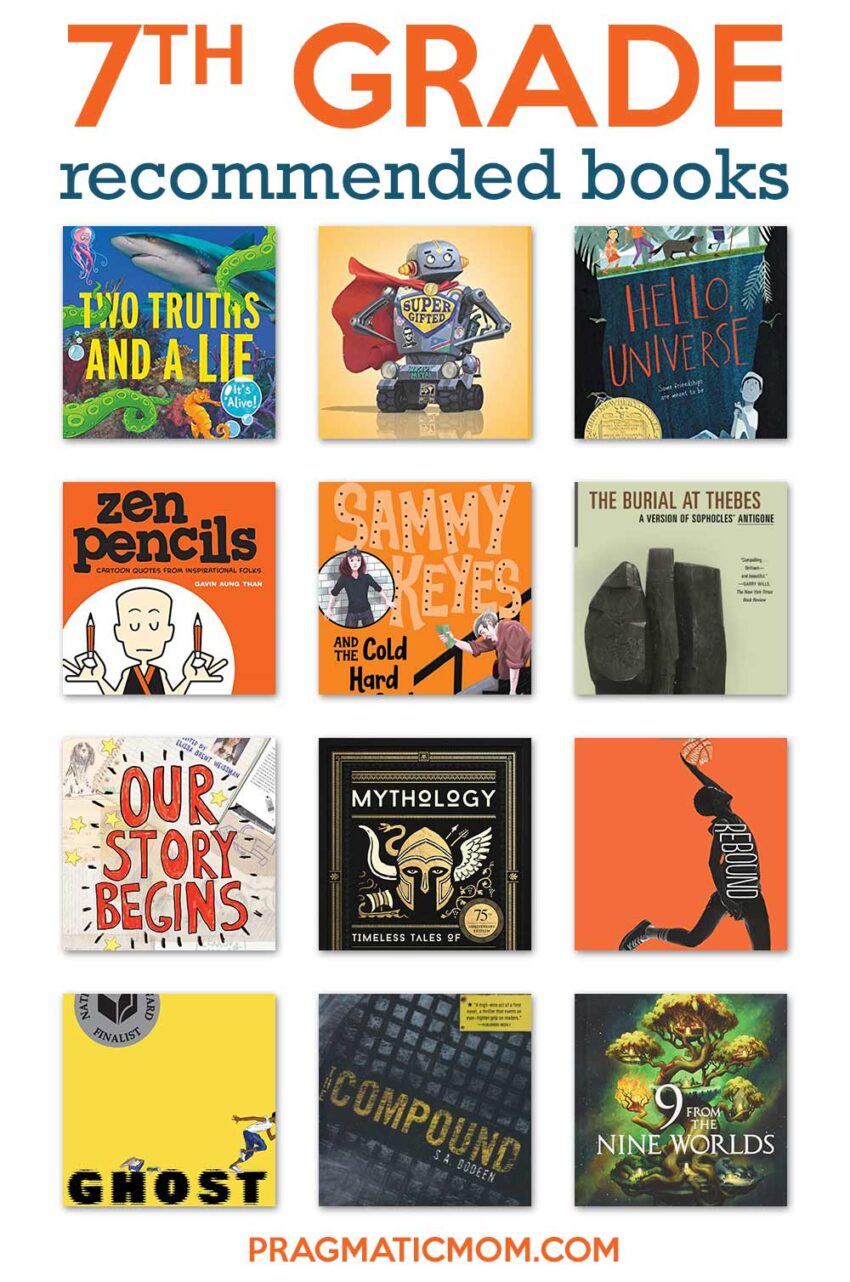 It feels like my son barely read any books in 7th grade despite fully recovering from his year-long concussion last year. Upon retrospection, however, he has read quite a few books. It just doesn’t feel that way because he binge-read an 11 book series, Wings of Fire. His love of this series prompted him to ask the universe (a.k.a. mom) if he could meet the author one day in a moment of defining his life goals. I was able to deliver in 48 hours by pure happenstance. Who knew that she lived in my town?! (And, by the way, she’s the nicest person on the planet!)

He’s still loyal to the authors he’s always loved: Kwame Alexander and Rick Riordan. He was excited for Riordan Presents and wasn’t disappointed the newest release by Roshani Chokski. Thankfully, his English teacher has forced him to diversify his reading choices.

p.s. His sister’s 7th grade reading list is here: 7th Grade Books From a 7th Grader. It’s very different from his! In fact, there is zero overlap. She likes dystopian, realistic fiction, and was flirting with YA.

p.p.s Thank you to the kind person who listed this post on the #BlogCrush linky! It was featured!

My son is constantly on screens like an addict. I asked him what he would do if he had to be screen-free. He said that he would be fine because he is reading a really good book right now at school. He said it was Ghost but he didn’t remember the author. He read it in less than a week. He said he would choose Ghost over Rick Riordan!!! I told him that this is a series and he asked if we could get it. Yes. Yes, we can! It’s at our library!

Aru Shaw and the End of Time by Roshani Chokski

What a brilliant idea for Rick Riordan to champion other diverse authors who write in the style of Percy Jackson mixing mythology, action-adventure, and humor. My son wasn’t sure if he would take to this book at first, but he ended up racing through it and is waiting impatiently for the next installation. I found the characters to be less sympathetic than Percy Jackson and gang, but I thought it was the perfect first release for Riordan Presents. We particularly enjoyed learning about Hindu gods. [chapter book, ages 8 and up]

I was delighted to find that The Crossover has a prequel in this novel in verse about how the dad fell into the game of basketball. [novel in verse, ages 8 and up]

Trials of Apollo: The Burning Maze by Rick Riordan

I was not surprised that my son abandoned the two books we were reading simultaneously to pick up Riordan’s latest. He’s chugging his way on his own so I’ve only read bits of the book at night to him. I look forward to reading it myself when he’s done. This is classic Riordan at his best: mythology, adventure, and humor! [chapter book, ages 8 and up]

Mythology: Timeless Tales of Gods and Heroes by Edith Hamilton

I loved Edith Hamilton as a child and her books installed a life-long love of mythology for me so I was thrilled when my son browsed our local independent bookstore and came up with this book. Usually, he can’t find any book he wants at bookstores. Classic for a children’s book blogger mom, isn’t it? [nonfiction, ages 9 and up]

9 From the Nine Worlds by Rick Riordan

This is next on my son’s list to read after he finishes the latest Apollo book by Riordan. My son likes these mythology guides by Riordan who always puts a unique and funny spin to the story. We have also read D’Aulaire’s Book of  Norse Myths twice, and the Magnus Chase series so we finally understand the 9 worlds. This will be a fun read that we are looking forward to! [mythlogy, ages 8 and up]

It was a recommendation from a tablemate at school that got my son started on this series. I had read the Warriors series with my oldest daughter and hated that series so I was dreading doing the heavy lifting of reading aloud to him. I was pleasantly surprised because while Tui T. Sunderland wrote for the Warriors series, she was bound by strict writing guidelines and wasn’t able to write what she wanted.

This is her baby and she brings a mythical world alive of different species of dragons with powers. Like the Harry Potter series, this series gets a little darker as books progress. Her talent is in creating emotionally complex characters along with epic battles that make the reader invested in their struggles. My son raced through the first ten books and we have pre-ordered the eleventh. He’s what I would call a “superfan” who suggested to me that we find out where she lives so that we could stalk her in an attempt to meet her. He did end up meeting her, but no criminal activity was necessary. [chapter book, ages 8 and up]

Our Story Begins: Your Favorite Authors and Illustrators Share Fun, Inspiring, and Occasionally Ridiculous Things They Wrote and Drew as Kids edited by Elissa Brent Weissman

Unfortunately, Tim Federle is included in this book and he’s accused of sexual harassment:

My son’s English teacher assigned the class to read different genres. That always disrupts our book flow since my son is firmly in fantasy adventure with occasional realistic fiction and graphic novels thrown in. We were tasked with finding nonfiction and we tried Two Truths and a Lie which was abandoned in favor of Our Story Begins.

The beauty of this book is that you can skip around since authors and illustrators share their story of what they drew and wrote as kids. I picked authors and illustrators that he knew first, reading to him and then flashing him the illustrations. The stories piqued his interest enough that we read the entire book in a scavenger fashion. I am hoping that this book plants a seed for him as he also likes to draw. [nonfiction, ages 8 and up]

The Burial at Thebes by Sophocles, translated by Seamus Heaney

My son’s read this book at school as an English class assignment. [translation of Sophocles play, ages 12 and up]

The Compound by S. A. Bodeen

I didn’t know that my son is in an assigned Reading Club with two other boys. They have to read the same book and then, I assume, talk about it. Their middle school library has three copies of many books and this is the one that they all agreed upon. [young adult, ages 12 and up]

My son’s rising 6th-grade summer reading assigning was Flipped by Wendelin Van Draanen which we both loved. I think this is one of Wendelin’s earlier books. The pacing is slower and there is a lot of repetition of the same information in one paragraph which made the story drag. The plotline, though, of counterfeit intrigue in Sammy Keyes’ apartment building is an interesting one. I wasn’t sure if my son would make it through this book given the amount of complaining I heard about how boring it was. He did manage to finish the book on his own though. [chapter book, ages 9 and up]

My son delighted in this quick read. The cartoon format really works to get kids to pick up the book and discover the deeper meaner of these famous quotes. [graphic novel, ages 8 and up]

Ash Mistry and the Savage Fortress by Sarwat Chadda

My son has been reading a lot of South Asian fantasy mysteries lately, so I thought I would try this series recommended to me by Charlotte of Charlotte’s Library. My son finished the book, which is good, but he didn’t love the time travel aspect of having a “twin” from the future come back to the present. Still, this is a fun premise for an adventure series. It just wasn’t his cup of tea. [chapter book, ages 8 and up]

We were in between the books my son wanted to read but were not yet out, so I presented him with my pile of TBR Newbery books. He chose this one because it won the Newbery. We need to finish this book but the slow start has pulled it further down on his pile. Personally though, she’s an amazing author and I highly recommend her books! [chapter book, ages 9 and up]

This is a really emotional book of three refugee stories that intersect (or at least that is our hypothesis). The unrelenting sadness is what made my son abandon this book. I plan to finish it though. Some of my social media friends have encouraged him to finish this book but when I urged him, it didn’t work. This is a book he is reading for pleasure so it’s a high bar in terms of being entertaining versus instructional. [chapter book, ages 9 and up]

It isn’t that Supergifted isn’t great though my son thinks UnGifted is better, but sequels do tend to disappoint. I think my son abandoned Supergifted because he was still in the thick of the Wings of Fire series and nothing could take him away from finishing that series. [chapter book, ages 8 and up]

Two Truths and a Lie! It’s Alive by Ammi-Joan Paquette and Laurie Thompson

I think my son, at age 13, is a tad old for this book. He found the stories boring but I think he would have enjoyed this if he was 8 through 11 years old. This was the phase when he read stacks of National Geographic Kids Why? and Weird But True books. I thought this book was fascinating and I liked how it emulates a popular app game and/or party game of two truths and a lie. [nonfiction for ages 8 and up] 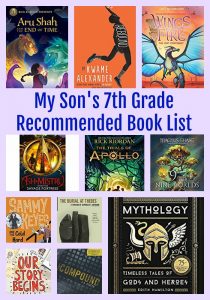