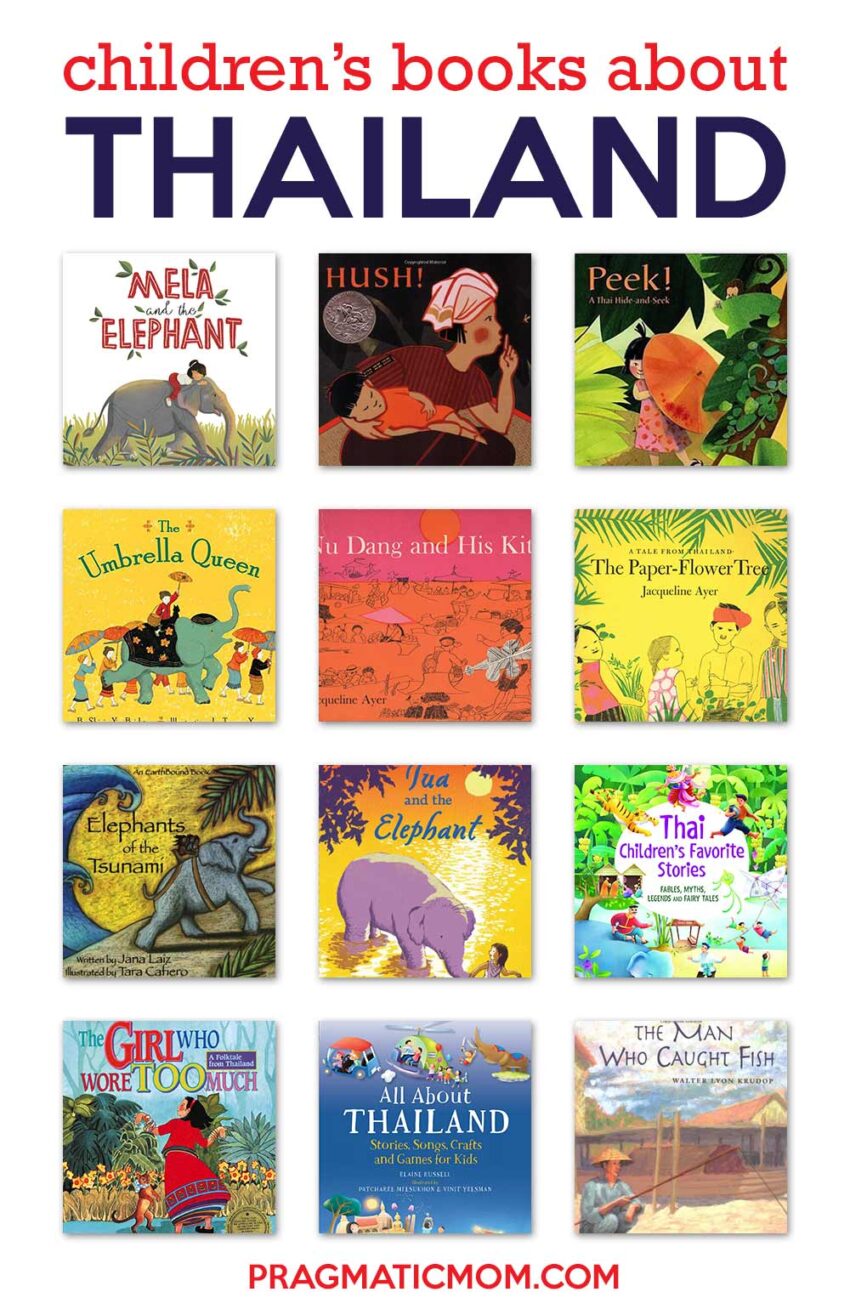 Read these wonderful children’s books about Thailand and learn about the country’s beautiful culture! These stories are sure to delight your young reader.

A teacher mentioned on a comment on my blog that she was grateful for my lists on Laos and Hmong children’s books but she was looking for books covering Thailand and Myanmar/Burma for students in her classroom who were recent immigrants from these countries. This list (and the one Myanmar) is for her.

Mela and the Elephant by Dow Phumiruk, illustrated by Ziyue Chen

Kindness needs no reward, for it brings happiness and warmth to the heart.

Mela set forth on an adventure but didn’t take her little brother along because he had nothing to offer her. Her adventure went awry and the animals that she gave gifts in exchange for help, ran off with her offerings without helping her.

Finally, an elephant helps Mela get home without asking for anything in return. This is a lesson that Mela puts to use the next day. Thai customs are woven throughout this story set in Thailand including bowing with clasped hands to show gratitude. Use this picture book to teach kindness and to explore Thai culture. [picture book, ages 4 and up]

In charming rhyme, a mother asks the wildlife around her to stay quiet while baby is asleep. The animals reflect the wildlife of Thailand: mosquito, lizard, cat, mouse, frog, pig, duck, monkey, buffalo, and elephant. Use this book to compare to a picture book about animals on a farm in the United States. [picture book, ages 4 and up]

Continue with exploring the wildlife of Thailand in this sequel to Hush! With the same rhyming text, help the dad search for his little girl who’s wandered away, meeting along the way: dragonfly, rooster, puppy, turtle, monkey, hornbill, snake, elephant, crocodile, and tiger. [picture book, ages 4 and up]

In Noot’s village, it’s always been the same. They make umbrellas to sell decorated with flowers and butterflies. Noot has always wanted to paint umbrellas and when she’s allowed to, she paints what she is told to do. On her own, though, she makes tiny umbrellas and paints elephants cavorting.

This year the king is visiting to pick the umbrella queen, the person who paints the most beautiful umbrella. Will the king like Noot’s tiny umbrellas? [picture book, ages 4 and up]

Nu Dang and His Kite by Jacqueline Ayer

First published in 1949 when Thailand was Siam, this picture book was recently reprinted by Enchanted Lion Books. The gorgeous illustrations and timeless story make this relevant today.

Nu Dang is a little boy who loves to fly his kite, but one day the wind makes off with it so he sets off down the long brown river to find it. The river is busy with the floating market merchants and buyers, priests, and boatmen.

His journey to find his kite takes him back home, where his kite has floated down to meet him. This is a great picture book to experience the bustle of life in Thailand. [picture book, ages 4 and up]

The Paper-Flower Tree: A Tale from Thailand by Jacqueline Ayer

A peddler stops at a little girl’s remote village bringing with him a paper flower tree. She longs for one of her own so he gifts her a paper flower with a bead as a seed. She plants it and faithfully waters it, hoping for a tree of her own, while the villagers think she’s foolish.

When the peddler returns, along with a performing troupe, she receives a lovely surprise. The rhythms, sights and sounds of rural Thailand are gently conveyed in this story that feels like a folk tale of wishes and dreams. [picture book, ages 4 and up]

The Man Who Caught Fish by Walter Lyon Krudop

This reads like a folktale cautioning against greed and arrogance. A stranger with a fishing pole is able to pull up fish after fish, even though the local fisherman catch very little all year. His rule is “one person, one fish” and he generously gives the fish away.

A king catches wind of the fisherman and desires a basketful of fish. The man complies with his rule of one fish per person, even when the king locks him in jail. Obsessed with the man and his fishing ability, the king has a plan but it doesn’t turn out how he thinks it will.

Use this book to compare to the story of Beauty and the Beast. [picture book, ages 4 and up]

Elephants of the Tsunami by Jana Laiz, illustrated by Tara Cafiero

Eight elephants who entertain by giving people rides on the white sands of Khao Lak Beach detected the movements deep in the earth of the coming earthquake that no human could feel.

The elephants sensed the danger but kept on working trying to communicate to their handlers who did not understand why the elephants were agitated.

Finally, two of the elephants took off, running for higher ground; their mahouts chasing after them on foot. Before the two off-duty elephants took off for the hills, they ran to the beach to rescue people stranded there. The elephants saved all these people’s lives. They are real-life heroes.

I don’t love the font or the page layout, but this story is a moving one told as if orally. It’s a wonderful reminder of the intelligence and gentleness of the elephants who are endangered. A portion from the proceeds of this book is donated to Tsunami Relief. [picture book, ages 6 and up (because of the descriptions of the devastation from the tsunami)]

Tua and the Elephants by R. P. Harris, illustrated by Taeeun Yoo

This gentle easy chapter book was inspired by the plight of the Asian elephants living in a refuge park in Chiang Mai, Thailand. The authors have created a plucky young girl, Tua, who is moved to save a young elephant from its cruel handlers.

In order to save this elephant, she must traverse the night markets of Chiang Mai, hide out in a Buddhist temple, and race to find a sanctuary where it will be safe. Though the bad guys are bad, there is a cartoon element to their antics and they are never scary, so I think this book would work well for ages 7 and up. [early chapter book, ages 7 and up]

Buddhism in Thailand by Frances Hawker and Sunantha Phusomsai, photography by Bruce Campbell

Baan, at eight years old, is invited to become a Buddhist monk and leaves his family during the rainy season to learn more about Buddhism. His grandfather, a rice farmer, was a monk for two years. There is a special initiation ceremony as Baan becomes a monk.

He learns meditation, the 10 rules for being a young monk, and performs tasks such fetching water. After three months, Baan returns home after completing a leaving ceremony. There is someone special that is coming home too! This is a gentle story of family and the Buddhist faith. [nonfiction picture book, ages 6 and up]

Traditional folk tales from Thailand are retold for a modern audience. These delightful stories not only amuse but also convey the culture and values of the Thai people. How the Bay of Bangkok Came to Be tells the story of how a kite-shaped Thailand’s geography.

Why Do We Have Thunder and Lightning? is due to Mekhala, a Thai goddess flashing her crystal ball to tease the god of thunder, Ramasura. How the Thais Learned to be Calm is about why the Thai people are taught to be gentle and well mannered.

There are many more stories in this book perfect for read alouds at school or at bedtime. [chapter book, ages 6 and up]

All About Thailand: Stories, Songs, Crafts and Games for Kids by Elaine Russell, illustrated by Patcharee Meesukhon and Vinit Yeesman

What I like about this series from Tuttle is that it covers a wide range of information, making it a one-stop shop for ways to teach kids about the culture of a country. From folk tales to activities, this book includes geography, songs, and crafts. You can pick and choose what to do and read about.

With this one book, you cover nonfiction, fiction, and activities to experience a glimpse into the Thai culture. [nonfiction resource book, ages 8 and up. It also works for younger ages if an adult reads aloud and leads the activity portion.]

p.s. Thank you to January Sanalak who wrote me with suggestions.

“There’s honestly not too many Thai/Thai American books:
Tua and the Elephant by RP Harris

The Umbrella Queen by Shirin Bridges

The Girl Who Wore Too Much: A Folktale from Thailand by Margaret Reed MacDonald

Elephants of the Tsunami by Jana Laiz

I think this is all to my knowledge, I wish more Thai/Thai Americans were writing more children’s picture books. Booki Vivat is Thai/American she writes the Frazzled Series for grade school, her main character is Chinese American but I’m still in full support, cute story.

And Pintip Dunn wrote a YA novel Girl on the Verge, with a Thai-American protagonist, I think it’s the first I’ve ever seen/read. It’s a thriller. “

p.p.s. There are some Thai Cave rescue books out! 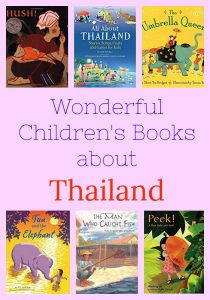