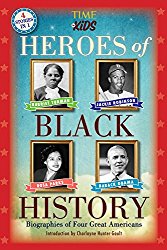 Charlayne Hunter-Gault, was one of two black students to attend the University of Georgia fifty years ago. She recalls, “We were greeted by a screaming, howling mob of students, and I think some provocateurs…And as we walked under the arch, the students were yelling and screaming all kinds of epithets, and telling us to go home — in some cases saying, ‘Kill the you-know-what.’ ” From NPR 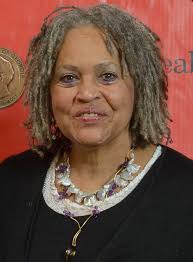 Today, she is an American journalist and former foreign correspondent for National Public Radio, and the Public Broadcasting Service. She also wrote the Introduction to Heroes of Black History: Biographies of Four Great Americans here: TFK_HeroesOfBlackHistory_Intro.

Today, I’m part of the Heroes of Black History blog tour, and I’m covering Rosa Parks, one of four Americans covered in this book.

The only tired I was, was tired of giving in.

Interesting facts I learned about Rosa Parks from Heroes of Black History:

Heroes of Black History: Biographies of Four Great Americans by the editors of TIME for Kids

This accessible collection highlights the stories of four great Americans: Harriet Tubman, Jackie Robinson, Rosa Parks, and Barack Obama. With photos and artwork throughout, the volume spans three centuries of African American History and is ideal for newly independent readers looking for report-worthy topics for both school work and personal interest reading. [nonfiction, for ages 8 and up]

Here are some great resources to go with this book:

Between the Lines: How Ernie Barnes went from the Football Field to the Art Gallery by Sandra Neil Wallace, illustrated by Byran Collier

This story of an NFL star who became one of the most influential artists of his generation. Ernie Barnes was a reluctant football player growing up in the 1940s segregated South. He would go on to play professionally but never gave up on his dream of becoming an artist and finding Negro artists hanging in museums. Ernie became the official artist for the American Football League. Today, his paintings hang in museums in Philadelphia, Los Angeles, New York City, Washington DC, and Daphne, Georgia. Ernie Barnes has been called the creator of the Neo-Mannerism art movement, bringing movement to art. In 1984, he became the official artist of the Olympic Games. [picture book biography, ages 4 and up]

Be A King: Dr. Martin Luther King Jr’s Dream and You by Carole Boston Weatherford, illustrated by James E. Ransome

Two of the most talented and prolific voices of color use their words and images to inspire a new generation to take Dr. King’s words to heart and utilize them by making mindful choices. In his words: “Everybody can be great, because everybody can serve…You only need a heart full of grace, a soul generated by love.” Use this book year round but it’s especially perfect for MLK Day coming up January 15, 2018. [picture book, ages 4 and up]

This is from a list from Book Riot of 25 Children’s Books for African American History Month: “They participated in some of NASA’s greatest successes, like providing the calculations for America’s first journeys into space. And they did so during a time when being black and a woman limited what they could do. But they worked hard. They persisted. And they used their genius minds to change the world. [picture book, ages 4 and up]

This is a beautiful book to learn about unsung and well known heroines of color to inspire a new generation of girls.

For example, Ruby Bridges made history as a young activist at age 6 when she became the first African American to integrate an all-white elementary school in the South, at William Frantz School in New Orleans, Louisiana. For the entire school year only one teacher taught Bridges in a classroom by herself.

Alice Ball was a chemist and medical researcher who developed the leading treatment for leprosy. She did not receive credit for her work until more than fifty years after her death! February 29 is Alice Ball day.  [advanced picture book, ages 8 and up]

January 26: Always in the Middle