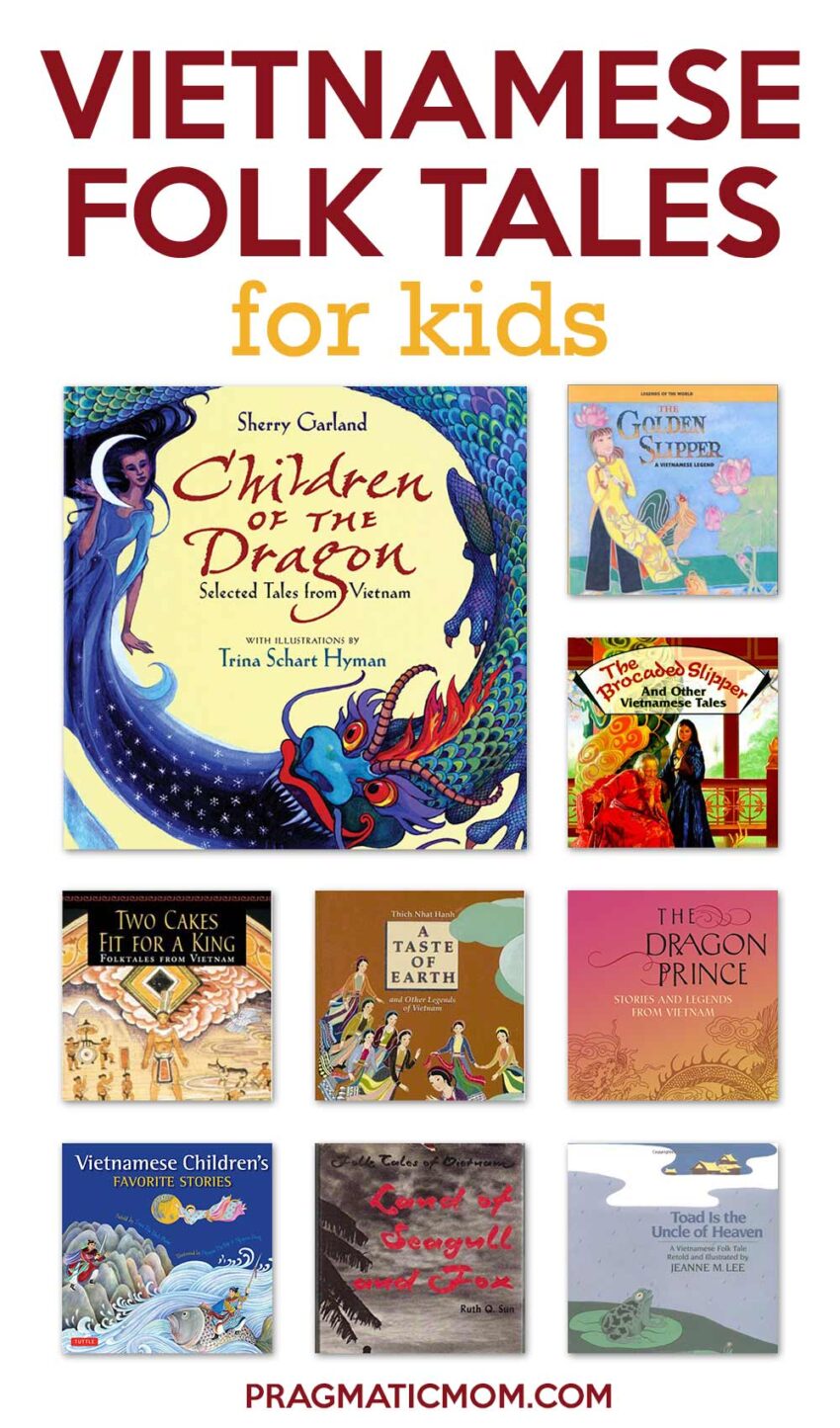 According to legend, Vietnam’s history began four thousand years ago when a dragon prince named Loc Long Quan married a fairy princess named Au Co. They had one hundred children, but this was too much for them to handle, so the parents agreed to separate. Au Co moved to the mountains with half of the children, and Lac Long Quan moved to the lowlands near the sea with the other fifty. Their oldest son founded the first Vietnamese kingdom.

In 111 B.C. China invaded Vietnam and ruled for almost one thousand years. Although China influenced Vietnam greatly, the ancient Viet culture was never completely destroyed. It is still evident in much of Vietnamese folklore.

From Children of the Dragon by Sherry Garland

With a country origination belief steeped in dragons and fairies, it’s not surprising that Vietnam has a rich culture of folk tales. Unfortunately, there are not many folktale picture books in the United States that tell these stories but there are some great compilations of Vietnamese Folk Tales that I’ve included below.

How about you? Have you read any Vietnamese folk tales? What books am I missing? Thanks!

Exploring Vietnam through Kidlit and Culture

Ice Cubes at the Door: A Survey of Lunar New Year Traditions by Janet Wong

Children of the Dragon: Selected Tales from Vietnam by Sherry Garland, illustrated by Trina Schart Hyman

Use this folktale compilation as an introduction not just to Vietnamese folktales, but also Vietnamese history and culture. At the end of each folktale, Garland includes notes related each of the six folk tales about how this ties into modern-day Vietnam including flora and fauna, animals, and holidays. Compare The Boatman’s Flute in this book withThe Fisherman and the Goblet: A Vietnamese Folk Tale. [advanced picture book with six folktales, ages 6 and up]

The similarities to Yeh-Shen are not surprising given that China ruled Vietnam for a thousand years. This story is also called The Brocade Slipper, and the slight deviations are a mysterious “godmother-like” figure that helps Tam, the daughter. There’s also a fish in this story, and luckily, it does not get consumed. The father in this story dies of a broken heart when he sees how poorly his daughter is treated by the second wife. The slipper is slightly different too. It is procured from the ground by the rooster that Tam treats kindly and falls off while she’s riding on horseback to the autumn festival. A soldier finds the shoe and gives it to the prince who conducts a shoe fitting right at the event. [fairy tale picture book, ages 6 and up]

The Fisherman and the Goblet: A Vietnamese Folk Tale by Mark Taylor, illustrated by Taro Yashima

Think of this as a grim version of the Rapunzel story, except without the long hair. A princess lives in isolation in a tower, waiting for her prince to come to her. She hears the notes a flute from a fisherman and falls in love. When he doesn’t return, she falls ill. Her father finds the fisherman in an effort to get her well. The fisherman isn’t handsome as she expected and she turns away. He, in turn, is in love with the beautiful princess but her rejection kills him. A crystal from his unanswered love appears next to him and it is carved into a goblet. The princess hears the faint music from the goblet and realizes his song of love. Their love story has a bittersweet ending. [picture book, ages 6 and up]

Toad Is The Uncle of Heaven: A Vietnamese Folk Tale retold by Jeanne M. Lee

Folktales often answer questions about nature and animals. This folktale addresses why toads croak. The answer puts the toad in a place of honor in Vietnamese culture. [picture book, ages 4 and up]

The Brocaded Slipper and Other Vietnamese Tales by Lynette Dyer Vuong, illustrated by Vo-Dihn Mai

This would be my first choice for anyone seeking a compilation of Vietnamese folktales for kids. It has an engaging retelling of all the important folktales and also has illustrations. You can pair this book to compare these Vietnamese folk tales with well-known fairy tales. The Brocaded Slipper is a version of Cinderella. Little Finger of the Watermelon Patch reminds me of Thumbelina. Master Frog is similar to The Frog Prince. For kids who like fairy tales, this compilation is the Vietnamese version. [chapter book, ages 8 and up]

I really liked this chapter book of folktales. It includes all the famous ones and also gives historical background in the introduction. This would be my second choice for anyone looking for a compilation of Vietnamese folktales. [folk tales chapter book, ages 9 and up]

A Taste of Earth and Other Legends of Vietnam by Thich Nhat Hanh, illustrated by Nguyen Thi Hop and Nguyen Dong

Thich Nhat Hanh is the Brothers Grimm equivalent for Vietnamese folk and fairy tales. He does a brilliant job retelling the stories in an engaging way and gives more details than some of the other books listed here. There are also black and white illustrations in both books. [chapter book, ages 8 and up]

The Dragon Prince: Stories and Legends from Vietnam by Thich Nhat Hanh

This is his newest book that combines well known Vietnamese folk tales with lesser known ones. Pair with A Taste of Heaven and give to kids who like the classic fairy tales books such as Andrew Lang’s The Blue Fairy Book, The Red Fairy Book etc. [chapter book, ages 8 and up]

The folktales in this book are shorter and illustrated which will appeal to younger readers. The actual folktales, though, deviate slightly from the ones in the other books. [advanced picture book, ages 6 and up]

I’d recommend this book to kids who really want to dive deep into Vietnamese folk tales; the kinds of kids who like to dig out primary sources. It’s a compilation of folk tales, fairy tales, and fables in the Aesop’s Fables vein. As a compilation, the stories don’t flow as well as the other books listed above. [chapter book, ages 12 and up]