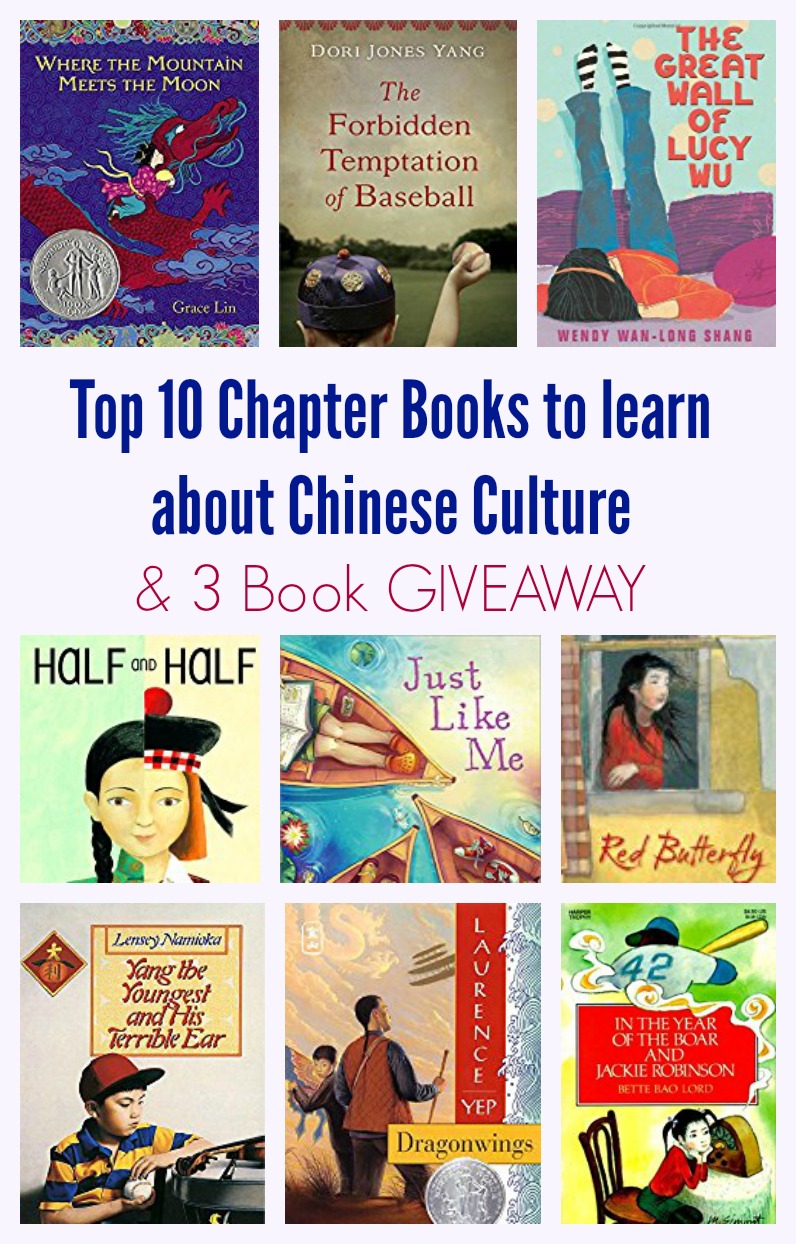 We are also giving away 3 copies of The Forbidden Temptation of Baseball. Please fill out the Rafflecopter at the bottom to enter.

How about you? What books with themes of China have you or your children enjoyed?

My newest book, The Forbidden Temptation of Baseball (age 10 and up), tells how another Chinese child adapted to life in America. This one takes place in the 1870s, when China’s government sent 120 boys to New England to study English and technology for fifteen years. While researching the Chinese Educational Mission, I was fascinated to learn that many of the boys loved playing baseball—despite the requirement that they wear their hair in a braid. That set my imagination on fire. My book tells of two fictional brothers; one adapts rather quickly and the other has a much harder time.

When my daughter was growing up, I wanted to make sure she connected to her Chinese heritage. Although I am not Chinese, her dad is, and I wanted her to relate to both sides of the family. I often read her folktales set in China. When she was in third grade, her teacher asked me to recommend a book for young readers about a child in China today. Confident, I scoured my personal book collection. I was surprised that I could not find a single one!

That sent me on a hunt for books about Chinese children. I found several, including award winners, and I read them all. A few were written decades ago. In the years since then, I have discovered many delightful new books, most about children balancing Asian and American values. I’ve collected quite a few and given others away to my many great-nieces and nephews. Plus, I’ve started writing some myself.

My interest in China began after college when I spent two years in Singapore studying Mandarin and teaching English. Later, I worked in Hong Kong for eight years as a foreign correspondent covering China. That’s when I met my husband, and our daughter was born in Hong Kong. Today, like many in hyphenated-American families, I want to build bridges between two countries I love and respect.

My first children’s book, The Secret Voice of Gina Zhang (age 10 and up), began with an American Girls contest. I was volunteering as a classroom mentor to two Chinese children, so I decided to write about a Chinese immigrant girl in Seattle. Since most immigrant kids learn to speak English quickly, I gave my character another problem: she could not speak a word in school. It’s a condition called selective mutism. The book won the contest and was published in 2001.

Daughter of Xanadu, a young-adult novel for age 12 and up, tells of a daring granddaughter of Khubilai Khan in 13th century China. Inspired by tales about battle victories, Emmajin sets about proving she can be the first woman to join the Khan’s army. After she meets a young merchant from Italy, Marco Polo, she begins to see the world—and warfare—through different eyes. I’ve spoken to many sixth grade classes about this Asian woman’s view of history.

In today’s America, where anti-immigrant tensions are rising, I think it’s extra important that kids read books about children from other countries and cultures.

As an avid reader of middle-grade books about Chinese and Chinese-American kids, I’ve developed my own set of favorites. Here are my top 10 recommendations.

Any list in this category must start with Laurence Yep, a San Franciscan with a Ph.D. who won the Laura Ingalls Wilder Medal for his long career writing children’s literature. He won Newbery honors for these two books, set in historic California, and has also written dozens of others. Dragonwings is now a classic, the story of a Chinese immigrant boy whose father works in a laundry but dreams of building flying machines. Dragon’s Gate tells of a boy who comes to the United States to work on building the transcontinental railroad. [chapter book, ages 12 and up]

My search for kids’ books about China sent me scrambling back to my own childhood bookshelf, where I found an original 1934 version of this book, about a 12-year-old girl growing up in what was then contemporary China. The author, who taught school in China a hundred years ago, won a Newbery Medal in 1933 for another book, Young Fu of the Upper Yangtze. Obviously, China has changed since then, but her books remain worth reading because they tell how traditional values clashed with modern Western influences. Ho-Ming is out of print, but Young Fu was recently republished. (chapter book, ages 10 and up)

8. Yang the Youngest and His Terrible Ear by Lensey Namioka, illustrated by Kees de Kiefte

This is the first of a series of four delightful books about four Yang children, immigrants growing up in a musical family in America. Nine-year-old Yingtao, the youngest boy, prefers baseball to the violin but meets an American boy whose family pressures him in the opposite direction. Namioka, Chinese by birth and married to a Japanese man, has written many excellent books set in America, China, and Japan. [chapter book, ages 8 and up]

7. Half and Half by Lensey Namioka

This charming story is not less well-known but spoke to me. It tells of a girl who is half-Chinese and half-Scottish—one of the few books about biracial children like my daughter. Fiona Cheng looks more like her Chinese father, but she wants to learn about her mother’s Scottish heritage. At the annual Folk Fest, she has to decide between two performances, one representing each side of her family. [chapter book, ages 8 and up]

6. In the Year of the Boar and Jackie Robinson by Bette Bao Lord, illustrated by Marc Simont

First published in 1984, this perennial favorite is witty, lively, and charming. I recently reread it and found it as fresh as ever. Set in Brooklyn in 1946, it tells of Shirley Temple Wong, a Chinese immigrant girl who enters fifth grade speaking almost no English.

After being ignored by her classmates from many races, she learns to play stickball and loves listening to broadcasts of baseball games. The delightful illustrations bring the story to life. [chapter book, ages 8 and up]

Like many readers, I wasn’t sure I would like reading a book in verse, but this one charmed me with its lyrical story-telling and vivid emotions. It’s an unusual tale since Kara is raised in Tianjin by an American woman who hides her because she doesn’t have the right to adopt her. This book draws you in with Kara’s voice of yearning, heartbreak, and longing for a home where she belongs. [chapter book, ages 8 and up]

4. The Great Wall of Lucy Wu by Wendy Wan-Long Shang

Growing up in America, Lucy loves pizza better than dim sum and would much rather play basketball than go to Chinese language school on Saturday mornings. As her brilliant sister heads off to college, Lucy is ready to claim a room of her own until her dad invites an elderly great aunt to live with them. All her plans are foiled! But the old lady manages to break through Lucy’s walls of stubborn resistance to everything Chinese. [chapter book, ages 8 and up]

Shang’s new book, published in 2017, also captured my heart. In this story, 12-year-old Peter Lee misses his big brother, who died before the story began. His mother seldom gets up from the couch, and Peter wants to win back her love and attention by playing baseball. When his strict father becomes the coach of his team, Peter expects disaster. But his father turns out to be loving and wise. And the team holds a surprise no one anticipated. [chapter book, ages 8 and up]

This unusual story tells about Chinese girls adopted by American parents, and the author knows about this from personal experience. Julia is dreading summer camp because her parents expect her to be friends with two other girls adopted from the same Chinese orphanage. Those other girls are not “just like” her. During a week of misadventures, she discovers that those girls—and others in their cabin—have identity struggles, too. [chapter book, ages 8 and up]

1. Where the Mountain Meets the Moon by Grace Lin

No list about Chinese culture is complete without the luminous writing—and illustration—of the incomparable Grace Lin. This Newbery Honor-winning book transports readers into a mystical land as Minli embarks on an epic quest to find the Old Man of the Moon, hoping he will bring good fortune to her family. A determined and spunky girl, Minli encounters a flightless dragon and a talking fish and manages to find a permanent spot in the reader’s heart, too. [chapter book, ages 8 and up]

3 Book GIVEAWAY of The Forbidden Temptation of Baseball

We are giving away three copies of The Forbidden Temptation of Baseball to three winners. We can only mail to U.S. addresses due to the high cost of shipping. Please fill out the Rafflecopter below. Dori Jones Yang is a Seattle-area writer with extensive experience making personal connections across boundaries of culture and time. Raised in Ohio, she lived and worked in Singapore and Hong Kong and covered the opening of China as a journalist for Business Week. Married to a Chinese man, she has traveled widely throughout Asia. Her previous books include a young-adult historical novel set in China at the time of Marco Polo and a middle-grade novel about a girl from China who begins fifth grade in Seattle only to discover she has lost her voice. After studying Chinese for many years, Dori knows what it feels like to struggle to express your thoughts in an unfamiliar language. Her newest children’s book, The Forbidden Temptation of Baseball releases on August 15, 2017. Learn more at her website.