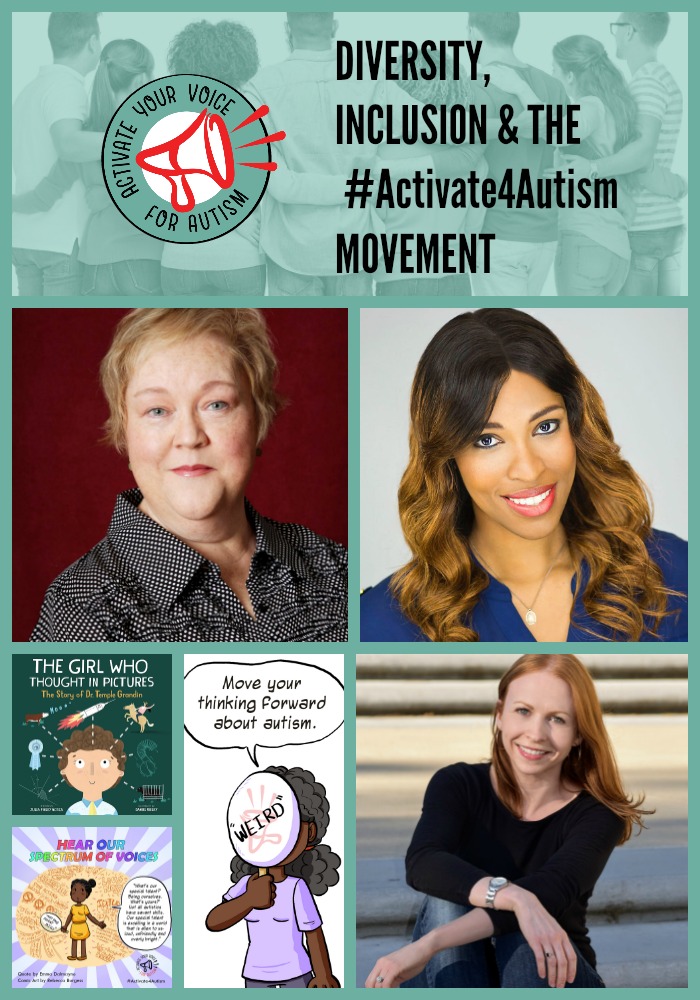 “When we speak about diversity and inclusion, it’s important to include everyone in our community, and that includes those on the autism spectrum. I activate my voice for autism.”

I’m speaking out for diversity and inclusion for all. For the last 3 years, I’ve participated in Multicultural Children’s Book Day because, like its founders Mia and Valerie, I believe that children must be able to find themselves in the books they read. Beyond seeing diversity in literature, I want to see inclusiveness spread into every aspect of our culture, especially for those on the autism spectrum.

Chances are someone in your community or social network is on the autism spectrum. You may not be aware of the challenges they face. Most grow up with a sense of shame because they’ve been stereotyped, judged as strange, and often bullied for being different. If you have a loved one with autism, you know how important it is that we help the public gain a deeper understanding of the autism experience.

At Geek Club Books, we make it our mission to engage and educate the public about autism—to replace stereotypes and fears with curiosity and wonder.

We launched an #Activate4Autism movement that brings together voice actors who are in favorite video games, cartoons and animated films, stage actors who have appeared on Broadway and London stages, children’s authors, a comic artist, a fan con, and, most importantly, autistic advocates. They’ve come together in unity to activate others to become more open and welcoming to people on the autism spectrum.

Meet a few of the Activators why they say #Activate4Autism is so important:

We must speak out for acceptance.

Television actress and MrsP.com storyteller, Kathy Kinney boldly stepped forward (as did so many others) to say that it’s no longer acceptable to marginalize autistic individuals—everyone must speak out for acceptance and inclusion for all.

Believe in the power of support and encouragement.

Children’s author Julia Finley Mosca for The Innovation Press wrote ‘The Girl Who Thought in Pictures,’ the story of Dr. Temple Grandin.

“While researching and writing this book, I couldn’t help but think about Temple’s early years, and doctors’ recommendations that she be sent to an institution because there was no hope for her. What would have happened to Temple in a stark grey room with no flash cards or people pushing her to succeed? Would she have ever learned to talk, never mind change the world with her ideas and innovations?”

Julia has a special place in her heart for autistic individuals, spending her summers working as an aide for nonverbal autistic teens. Their daily challenges gave her a deep appreciation for the power of support and encouragement. It’s for that reason she activated her voice:


Let’s become a counter narrative to ignorance and hate.

The Universal FanCon is dedicated to being the first ever multi-fandom con dedicated to inclusion, highlighting woman, LGBTQ, disabled people, autistic community, and persons of color.

“#Activate4Autism and UFC are part of the counter narrative to a world story of ignorance and hate. Through our differences, we are united and an example of positivity, diversity and hope.”

Our world is better with a spectrum of voices.

Rebecca Burgess is a comic artist from the UK who is also a woman with autism. She created a comic, “Understand the Spectrum” for Autism Acceptance Week last year. The comic went viral as it breaks the myths and stereotypes often associated with autism. For #Activate4Autism, Rebecca created “Hear Our Spectrum of Voices” comic featuring quotes from other autistic advocates. Both are downloadable for free on the #Activate4Autism page.

Watch all the actors, authors, and advocate videos over at #Activate4Autism on Geek Club Books. You can activate your voice too! You’ll find everything you need on our “Be an Activator” page.