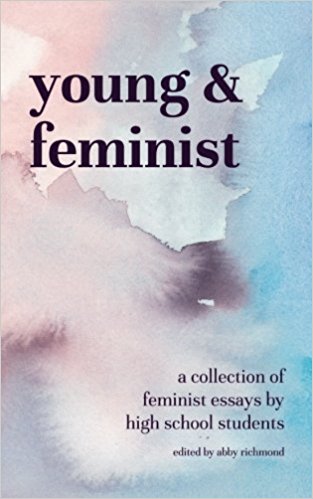 Please welcome Abby Richmond, a high school senior and friend of my oldest daughter. This book, Young & Feminist, is her brainchild. Her thoughts about being a feminist in these challenging times are below.

Please note that 100% of sales from this book will be donated to Planned Parenthood.

p.s. My daughter is also one of the contributing writers of this book and also did the cover.

It’s a challenging time to be a feminist. Although sexism certainly existed in the country before Donald Trump was elected president, it now has a fresh face and firm role in governing our country. I’ve always taken notice of microaggressions and discrimination in my day-to-day life, but growing up as a cisgender straight white woman in an affluent city, I’ve been lucky to feel safe from the harshest realities of misogyny and other forms of bigotry. Donald Trump’s election, and the fervent support for his destructive policies and statements from wide swaths of the country, brought to light deeply-rooted sexism, racism, homophobia, transphobia, and xenophobia in our country. These dangerous tendencies were not as apparent as they should have been to people like me previously. Trump’s election signaled the end to an era of complacency for many liberals like myself in this country. Now, under President Trump’s administration, every frightening governmental decision seems to transport our country back decades in time. These days more than ever, there is so much to do, so much to fight for, so much to protest, and so much to say. After his election, I found myself grappling with this. How could my peers and I lend our voices to support this global struggle?

With this as a backdrop, my tangible moment of inspiration for this book came on the past International Women’s Day. I serve as an officer of the Feminism Club at my school, Newton North High School, and the co-officers and I organized a rally in the school courtyard during lunch to commemorate the day. Despite the drizzling grey skies and bitter March temperatures, a large crowd formed. A megaphone was passed around, and anyone who wished to describe what feminism meant to them was encouraged to speak. Students who barely knew each other huddled together in the cold, cheering after every speaker. I watched, awestruck, as students of all backgrounds, ages, and genders shared personal stories of street harassment, body shaming, sexist language in classrooms, and the double sting of misogyny and racism. This was why feminism mattered, they all said.

As I shivered on the wet high school pavement, I witnessed the true extent of teen activists’ power. Our voices are strong and fresh and capable of making change. That’s really when the idea of creating a book fully took root. I decided to create a collection of feminist essays with the hope of elevating teen activists’ voices regarding the feminist issues that mattered to them.

That’s not the only goal of this project. All twenty contributors to this anthology have committed to selling books to friends, family and neighbors, with all proceeds from sales being donated to Planned Parenthood. Planned Parenthood provides critical services and programs related to health care, sex education, and family planning to people all over the country. The organization is frequently under attack by conservative politicians, and already faces defunding under the Trump administration and Republican Congress. Planned Parenthood’s reproductive health mission is crucial to the feminist movement, and is one that the contributors to this book feel passionate about.

I’m so proud of all the work the writers have put into their essays. All twenty of these students have spent the past few months reflecting, writing, editing, and preparing to share their ideas with the world. Without so many young activists eagerly offering to write and contribute, this idea would never have turned into reality. Their essays are on topics ranging from intersectionality, rape culture, mothers in the workforce, genderqueer pronouns, the damaging stereotype of the “oppressed” Muslim woman, and many others. This book shows just how well-equipped young people are with insights, strength, diverse perspectives, and a desire to effect change.

At the end of the day, feminism means striving for equality for all—not just between genders, but also for people of different races, religions, sexualities and ethnicities. Feminism means everyone has a voice.

I hope this book takes a small step in that direction.

To support those who are young and feminist, I am purchasing three copies and giving them away. I can only mail to US addresses though. Please fill out the Rafflecopter below to enter.