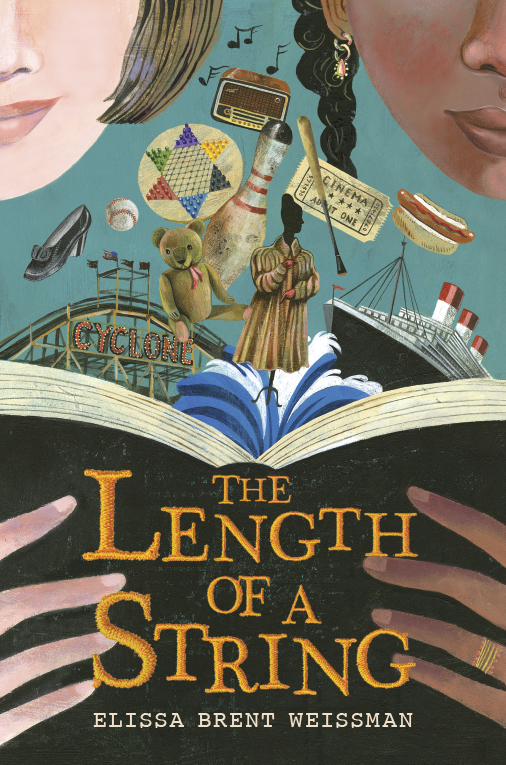 I’m thrilled to revealing the cover for Elissa Brent Weissman’s lastest book, The Length of a String! We are also giving away three of her previous books. My son is a big fan of her Nerd Camp books! Please fill out the Rafflecopter below to enter.

What do you think of her book cover? Thanks for sharing your impressions!

The Length of a String by Elissa Brent Weissman

Imani is adopted, and she’s ready to search for her birthparents. But when she discovers the diary her Jewish great-grandmother wrote chronicling her escape from Holocaust-era Europe, Imani begins to see family in a new way. Imani knows exactly what she wants as her big bat mitzvah gift: to meet her birthparents. She loves her family and her Jewish community in Baltimore, but she has always wondered where she came from, especially since she’s black and almost everyone she knows is white. When her mom’s grandmother–Imani’s great-grandma Anna–passes away, Imani discovers an old diary among her books. It’s Anna’s diary from 1941, the year she was twelve–the year she fled Nazi-occupied Luxembourg alone, sent by her parents to seek refuge in Brooklyn. Written as a series of letters to the twin sister she had to leave behind, Anna’s diary records her journey to America and her new life with an adopted family. Anna’s diary and Imani’s birthparent search intertwine to tell the story of two girls, each searching for family and identity in her own time and in her own way. [chapter book, ages 10 and up] We are giving away three of Elissa Brent Weissman’s books including the anthology that she edited. I can only ship to U.S. addresses due to the high cost of shipping. Please fill out the Rafflecopter below to win this package of books!

Our Story Begins: Your Favorite Authors and Illustrators Share Fun, Inspiring, and Occasionally Ridiculous Things They Wrote and Drew as Kids edited by Elissa Brent Weissman

From award-winning author Elissa Brent Weissman comes a collection of quirky, smart, and vulnerable childhood works by some of today’s foremost children’s authors and illustrators—revealing young talent, the storytellers they would one day become, and the creativity they inspire today. [anthology, ages 8 and up]

A twelve-year-old takes on the stock market in this money-minded middle grade novel that Publishers Weekly calls “a smart pick.”

It all starts when seventh grader Lindy Sachs is granted one hundred dollars and access to her father’s online trading account as a way to alleviate her boredom while she’s home sick from school.

Lindy learns something immediately—she is very, very good at e-trading. Her one hundred dollars soon becomes two hundred dollars. Then four hundred. And more. With trading talent and access to her parents’ savings, the opportunity to make some real dough is too tempting to pass up. In fact, given how well Lindy’s stocks are doing, it would be a disservice to not invest it all…Right? [chapter book, ages 8 and up]

Ten-year-old Gabe has just been accepted to the Summer Center for Gifted Enrichment. That means he’ll be spending six weeks at sleepaway camp, writing poetry and perfecting logic proofs. S.C.G.E. has been a summer home to some legendary middle-school smarty-pants (and future Jeopardy! contestants), but it has a reputation for being, well, a Nerd Camp. S.C.G.E = Smart Camp for Geeks and Eggheads.

But is Gabe really a geek? He’s never thought about it much—but that was before he met Zack, his hip, LA-cool, soon-to-be stepbrother. Gabe worries that Zack will see him only as a nerd, until a wild summer at camp—complete with a midnight canoe ride to “Dead Man’s Island”—helps Gabe realize that he and Zack have the foundations for a real friendship. [chapter book, ages 8 and up]

18 thoughts on “Cover Reveal for THE LENGTH OF A STRING & 3 Book Giveaway!”