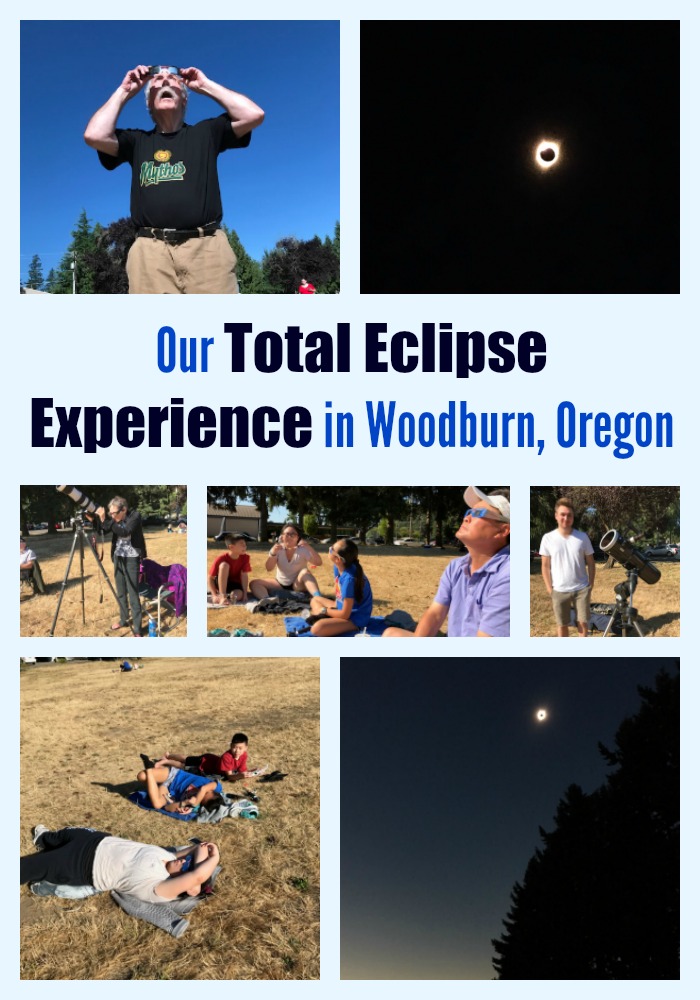 It just so happened on our art school tour of the west coast that we would be in the solar eclipse of totality if we were willing to wake up at 4am and drive for a few hours to get to Woodburn, Oregon by 10am. We were. Actually, we didn’t have much choice. As we drove from San Francisco heading to Vancouver, British Columbia, my husband could not find a hotel for us in Oregon. We didn’t realize that people had booked up all the rooms in the cities of totality long before we planned out trip. My husband opted to drive to Roseburg, Oregon since he was able to find a hotel there, and then leave very early in the morning to avoid traffic to get to within the band of totality. I, along with a lot of others, opted for Woodburn, Oregon. It’s the closest city of totality on the Oregon/Washington state border while still on the same highway from Roseburg. We arrived a few hours early only to find Woodburn breakfast options to be quite crowded. We used Google maps to find a small park nearby to watch the eclipse. There were several more serious photographers at our location. We had only our iPhones but we did have the presence of mind to bring eclipse glasses from Massachusetts with us. The glasses really helped! Our most colorful memory is probably of that older hippie who was quite friendly. He chatted with us before the eclipse. When we asked him if he saw the last partial eclipse that my husband and I have dim memories of watching through a pin hole on a piece of paper in elementary school, he had a much more vibrant memory. He said, “I don’t know where I was for that one, but I know I was stoned.” It was one of those perfect, defining moments. The actual total eclipse was quite a sensory experience. Before it began, the sun felt unusually bright and we were warm sitting on the grass field. At partial eclipse, the temperature noticeably dropped as the sun shone less brightly. There were distinct winds that picked up too that my husband attributed to the moon’s alignment with the sun. And then the moment of total eclipse was quite dramatic and spectacular. It did get totally dark, except for a faint shadow of sun around the edges. The people on our field whooped and hollered. It was a bonding experience.

And then, suddenly, it was over. We did not get the full two minutes plus as we were on the edge of total eclipse. It felt quite sudden and anti-climatic for the sun to revert back to full power. Then, everyone raced to their cars to get out of there but it was too late. We were all backed up in traffic but it was worth it. A moment to remember, even if we forget our location like our hippie friend!

What Happens Next by Claire Swinarski

“Abby’s family runs McCourt Cabins in Moose Junction, but the resort is not going as well as they would like. An upcoming eclipse will hopefully mean an uptick in business, which is sorely needed, especially since Blair, Abby’s oldest sister, is in a residential treatment program for anorexia. Blair, a talented ballet dancer, has struggled with the disorder for a while, but could not complete an audition for the Joffrey Ballet School Trainee Program, and spiraled downwards after that. Jade, Abby’s other sister, is busy with work and boyfriends, and Abby gets involved with one of the customers, Dr. Leo Lacamoire, who shares her interest in astronomy. His assistant, Simone, asks for Abby’s help locating a rare telescope that was buried in the town’s time capsule in 2000, and Abby enlists her sister to help her. As the eclipse approaches, secrets come out about both the professor and Abby, and Abby’s family deals with Blair’s illness and recovery.” [middle grade, ages 8 and up] 10 thoughts on “Our Total Eclipse Experience in Woodburn, Oregon”